Tucked in a corner of *Scape is a less-than-a-week old brainchild of a welcoming couple, which is already gaining many attention serving up their much-loved Kürtőskalács. Otherwise known as chimney cakes, they are made by rolling and depositing layers of sweet, yeast dough onto a tapered cylindrical rotating spit before baking them in an oven. 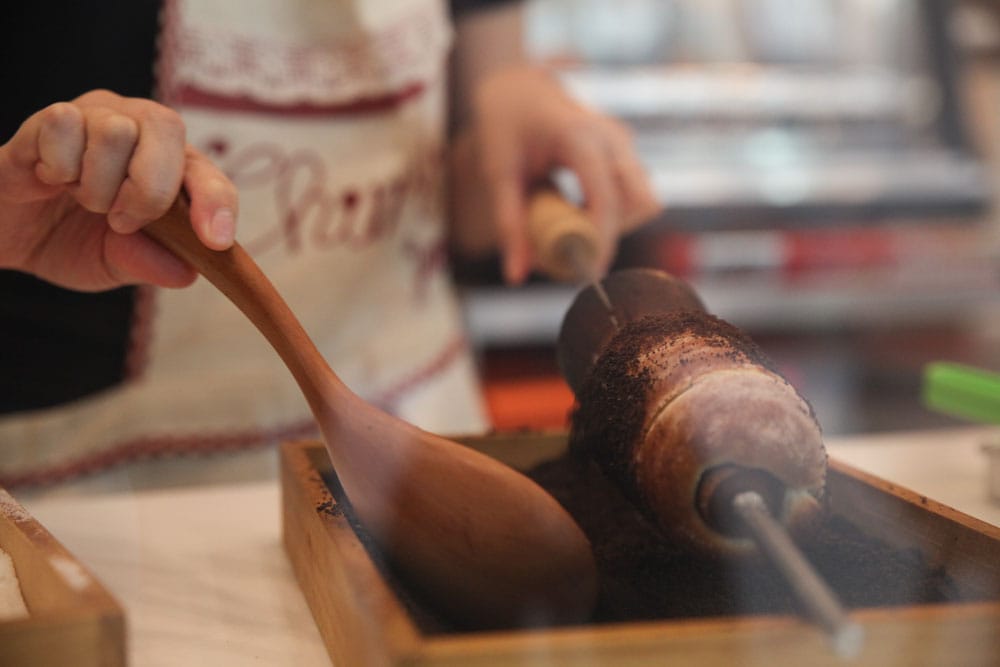 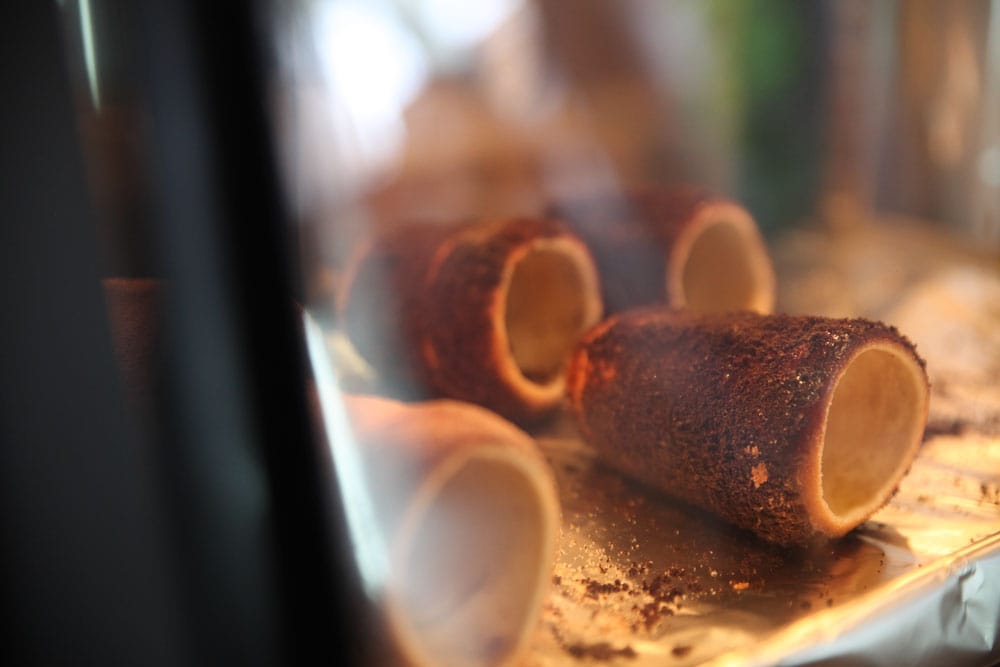 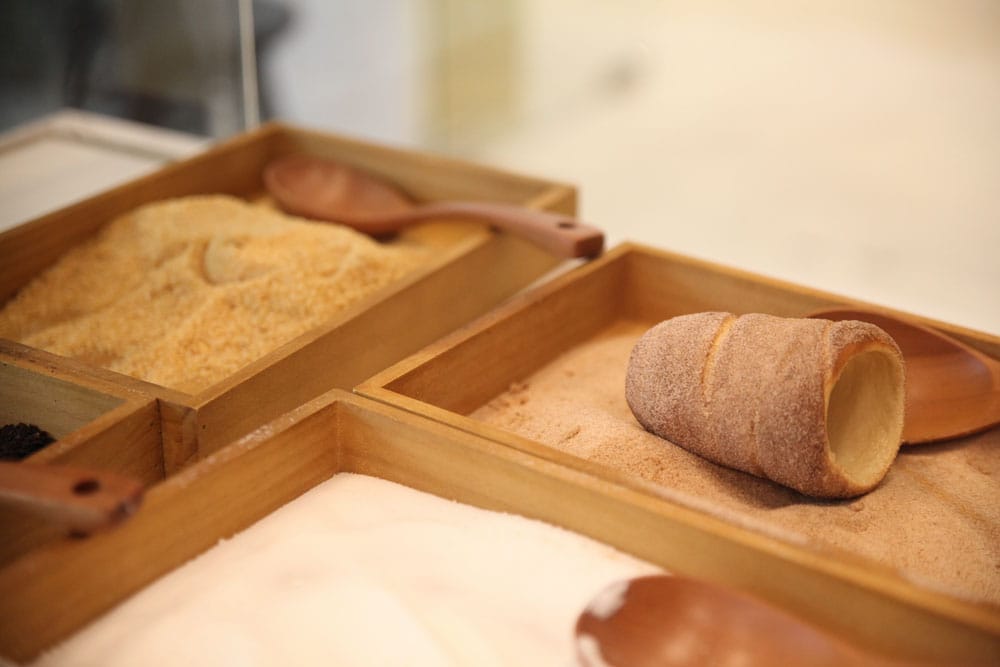 The couple’s  first encounter with chimney cakes was during their semester exchange program in Budapest, where chimney cakes are commonly seen and enjoyed as a carnival food. Determined to bring home this European snack, they went on to learn the ropes of making Kürtőskalács from a local academy in Budapest years after, before starting their venture into this Hungarian pastry
Salted Egg Chimney Cake $4.50 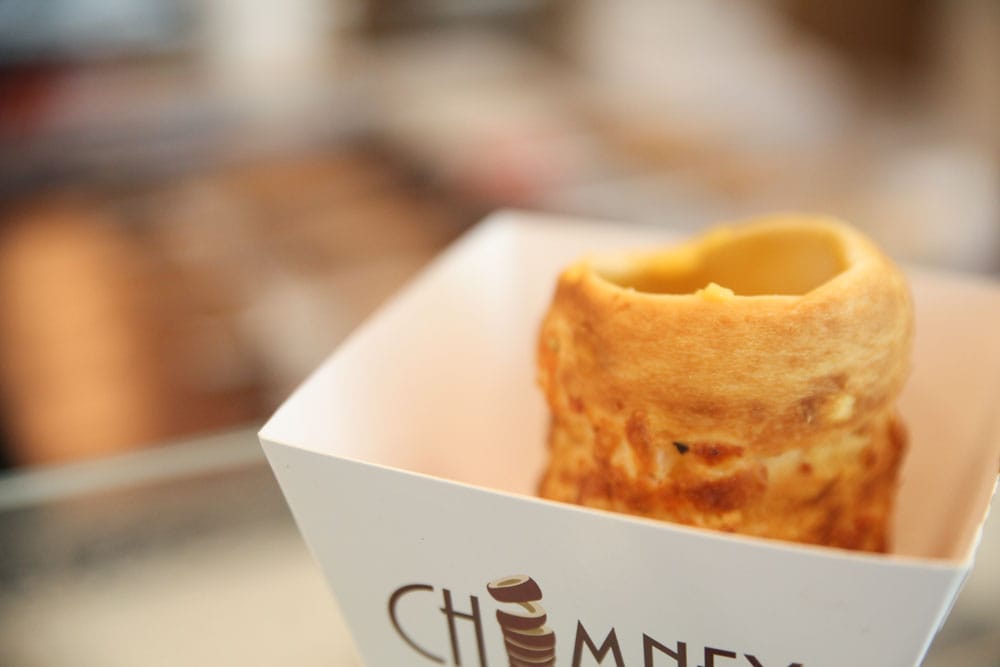 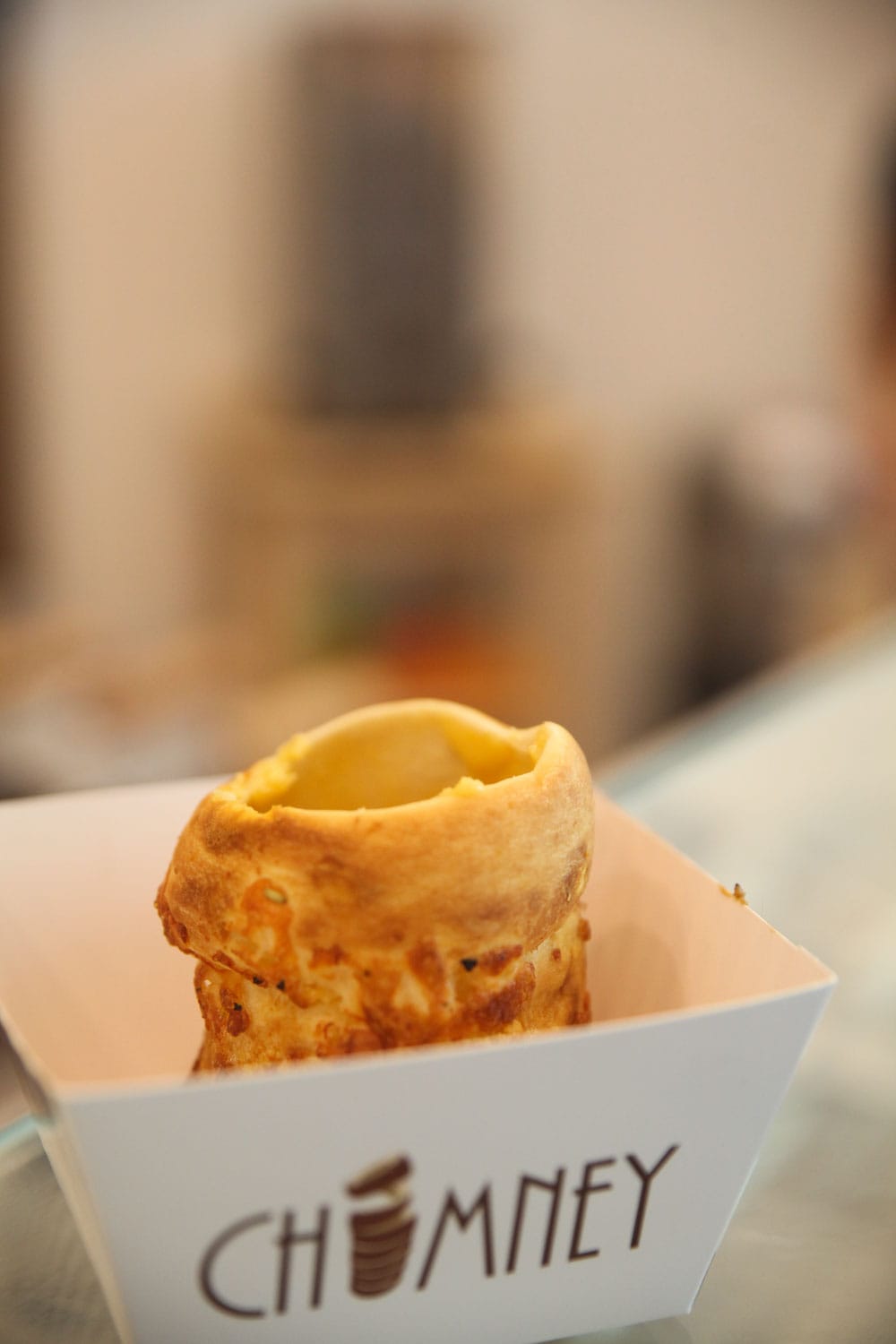 The unraveling of the endless layers of chimney was a satisfying one to start – as we took in the fragrant mild scent from the sweet yeast dough that exudes from the steam atop. Bits of mozzarella and cheddar were sealed by garlic and herb butter on the golden-brown shell that was lined with homemade salted egg sauce in the interior.
Our virgin chimney cake experience was an enjoyable albeit confusing one – the texture resembles a chewy pizza base with a croissant-like exterior. The salted egg sauce was flavourful with the ideal sandy texture, complementing the hints of cheese yet not overpowering the original taste of the pastry itself.
The basic savoury chimney cake costs $3.50, with additional options of chicken ham, turkey bacon and salted egg at $1.00 each.
Cinnamon Sugar with Nutella $4.00 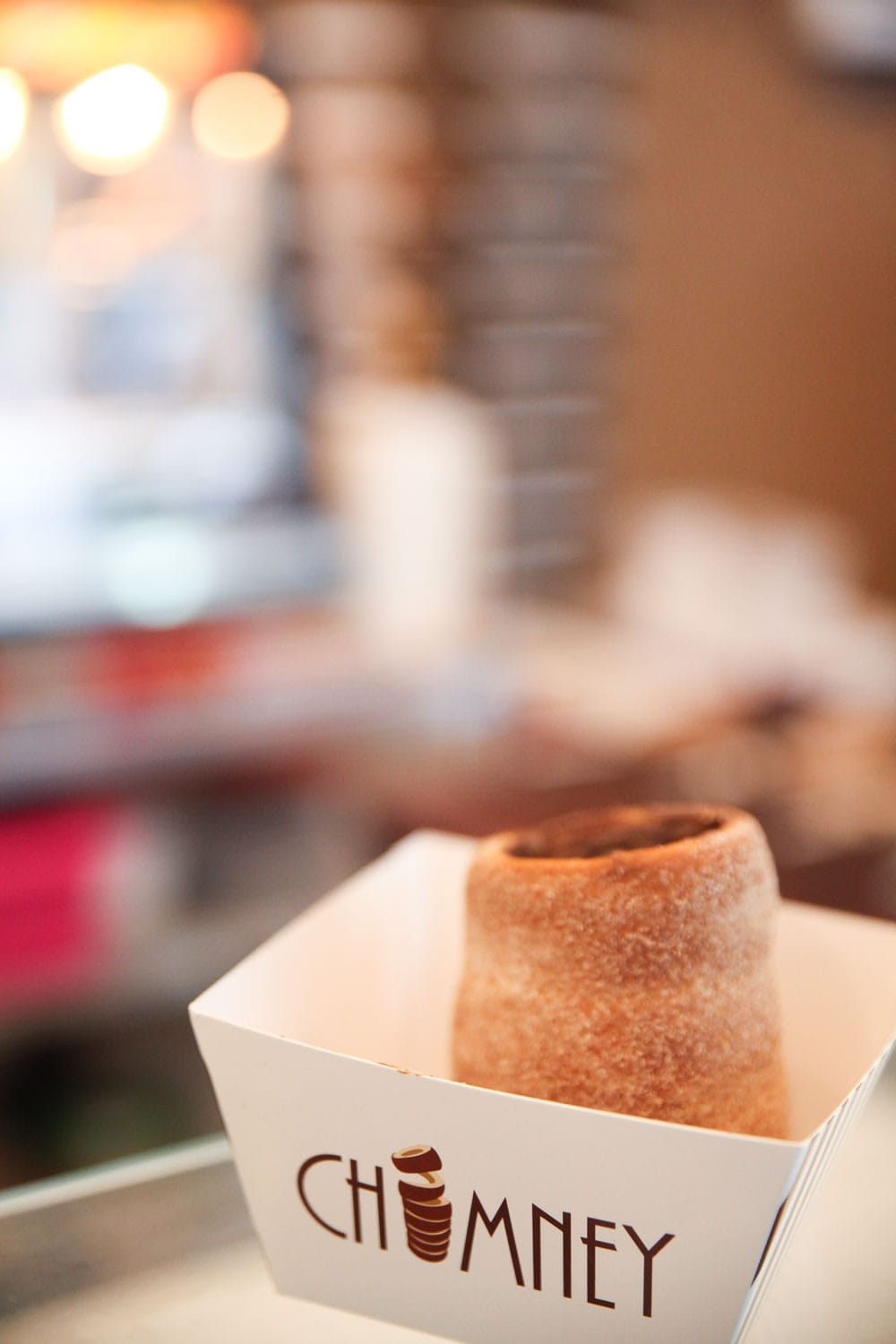 For the sweet-tooth, count on this perfect combination of nutella-lined chimney cake rolled on a bed of cinnamon-sugar mix. The crust of this rendition is crispier compared to the savoury option – the caramelization of sugar under heat forms a continuous caramel coat which adds firmness to the crust. The crisp sound of breaking the flaky outer layer with each bite is almost addictive.
Choose from cinnamon sugar, peanut or oreo at just $3.00, and feel free to add on nutella spread, peanut butter and cream cheese at $1.00 each.
Chimney Cone with Softserve $4.50 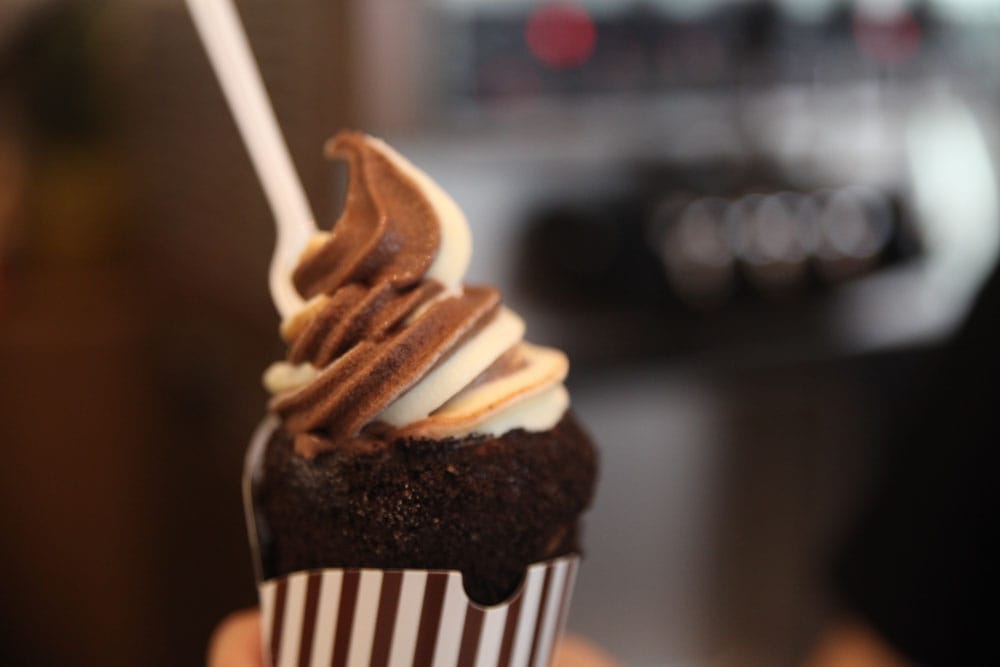 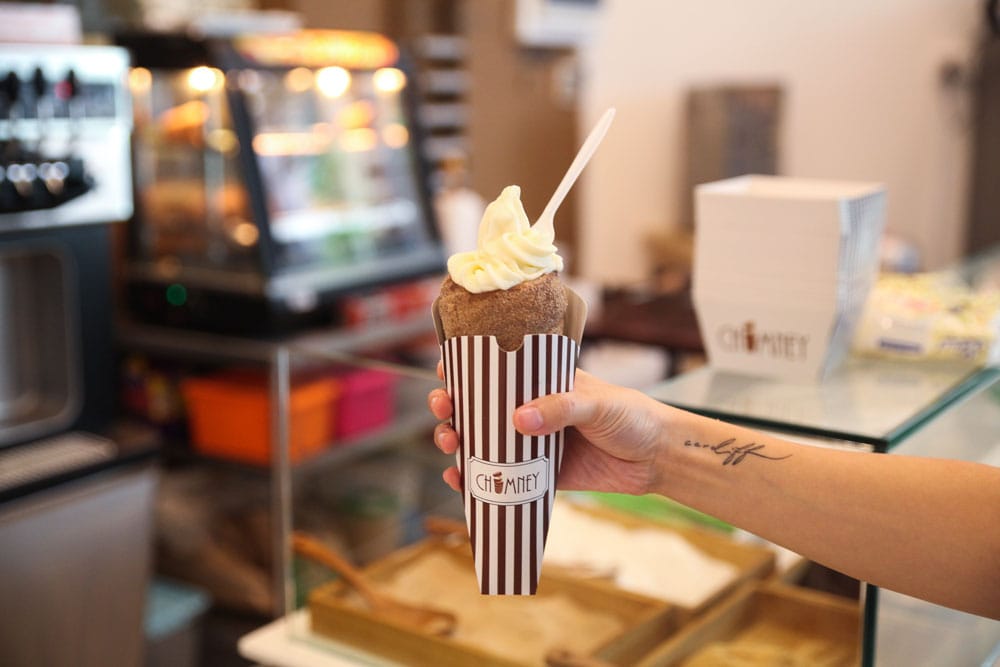 The owners’ addition to the chimney family is a cinnamon sugar chimney cone with a homemade vanilla softserve. The latter is generally on the sweeter side, with a texture between a gelato and a softserve. Although it might get a little messy with this one – it is true, hot and cold desserts never disappoint.
Each chimney cake is baked upon order (except for the softserve) – making the 10 minutes wait before devouring your freshly-baked Kürtőskalács an anticipating and worthy one. We appreciate the infusion of local flavours (think salted egg and peanuts) into this Eastern European snack, and we could not be more delighted to hear that new flavours are in the works with every quarter.
Address: *Scape, 2 Orchard Link #02-02
Opening hours: Monday – Friday 1100 – 2100 / Saturday – Sunday 1100 – 1500, 1700 – 2200
Contact: +65 9630 3497
Facebook
Instagram