A new wave of premium sneakers has taken the market by storm. Strategically positioning itself on a unique trajectory that exists somewhere between athletic and luxury footwear, Common Projects have significantly changed the current landscape of the contemporary sneaker culture. 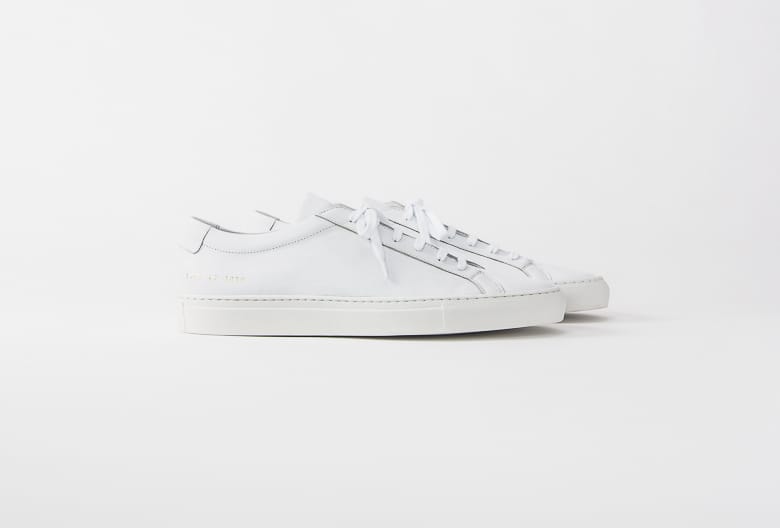 The Origin
Common Projects was founded in 2004 by American art director Prathan Poopat and Italian creative consultant Flavio Girolami. The company name originated when long-time friends, Poopat and Girolami, were working on a few ‘common’ footwear projects while living in separate countries. What started as a ‘just-for-fun’ side project ended up becoming the bench mark for the luxury footwear market, with many celebrities wearing these highly sought-after sneakers. 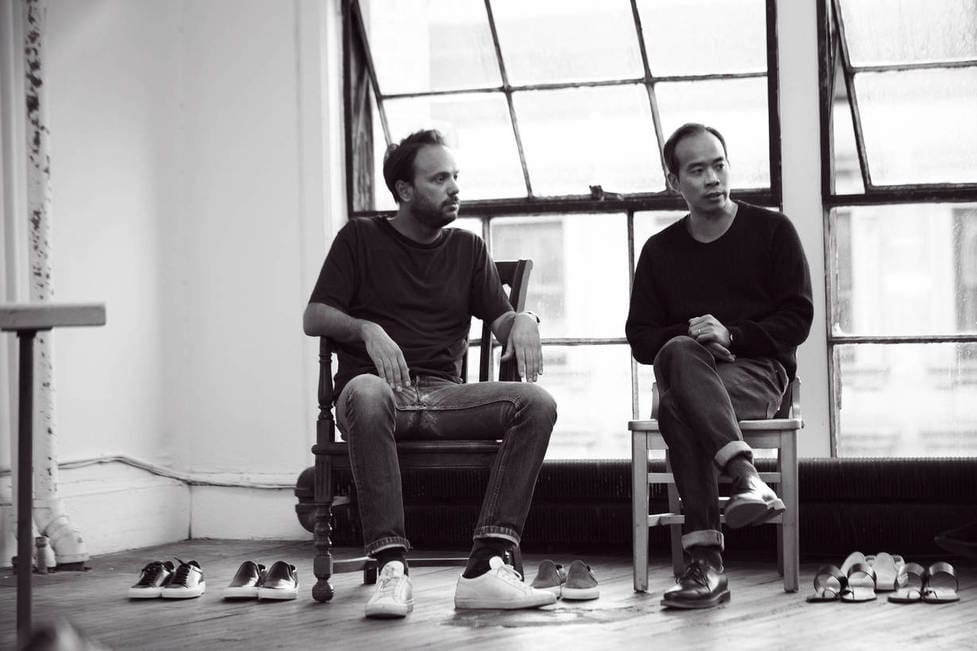 When Adidas revealed a set of minimal white Stan Smiths made for distribution at selected concept stores, Hypebeast commenters were quick to mention the distinct similarities to Common Projects, with some criticizing the white Stan Smiths  as “a rip off.”
“It’s now the original,” says Girolami.

Less is More
Derived from the idea that over-the-top sneakers were too cartoonish to wear to an office and that formal shoes were too stuffy and uncomfortable for daily wear, Poopat and Girolami focused on deconstructing and creating a perfect pair of sneakers wearable for every occasion, subsequently leading to the birth of the understated minimalistic sneakers.
Their first shoe, the Achilles, was released in 2004 and was an instant hit. “There were sports sneakers and then there were dress shoes,” said Eugene Tong, style director of Details magazine. “They were the first brand to bridge that gap.” 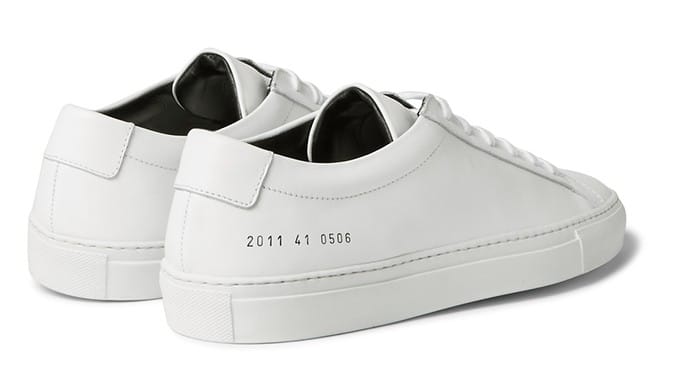 Photo: Common Projects
In a recent collaboration with menswear e-retailer Mr Porter for their fifth birthday, Common Projects and Mr Porter unveiled a special pair of their Original Achilles sneakers with a twist – where the gold embossed numbers are now black – paying homage to the minimalistic silhouette of the sneaker.

Signature Number Stamp
Made with premium craftsmanship, every pair of Common Projects footwear is hand-stitched in Italy – often using Italian Nappa leather as their main material. The uniqueness of their footwear lies in the fact that every pair is finished with a unique propriety stamp – a line of golden-coloured numbers printed along the heel which has become as iconic as the Nike Swoosh or the Adidas Trefoil. Not known to many, the numbers actually indicates the style, size and colour of each pair of shoes respectively. 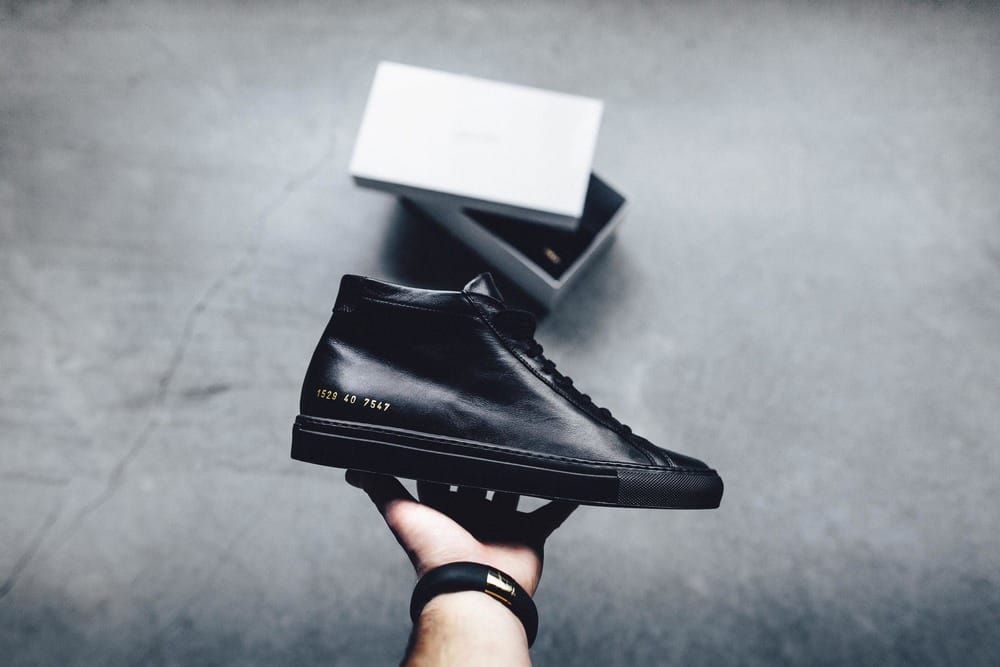 Since the launch in 2004, Common Projects has gone on to receive world-wide traction, with their designs being awarded “Sneaker of the Week” twice by GQ Magazine. Despite the fact that the New York-based footwear brand has never advertised their shoes since 2004, the brand manages to attract international acclaim and they are now stocked by over 200 retailers around the globe including popular luxury online boutique Net-a-Porter, The Corner, Mr Porter and more. They have also recently launched a Women’s range, adding a slight feminine touch to its classic men styles – featuring an open-toed sandals and ankle boots with a small heel. 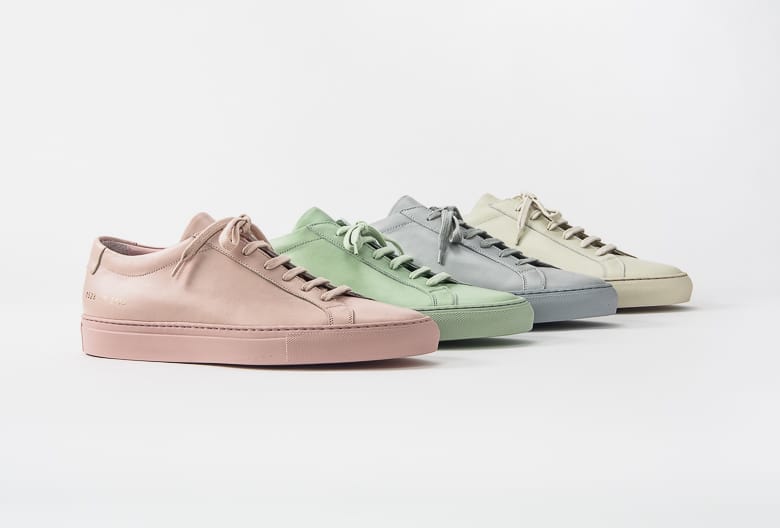 Cult Following
Despite coming from a brand that is completely averse to marketing and advertising, the Common Project sneakers gained rapid traction especially after celebrities such as Kayne West, Ellen DeGeneres, Nick Jonas and John Legend have been seen decked out in their stylish outfits along with these minimalistic sneakers.