We’re all for a pack of potato chips, especially if they’re experimenting with cool and unusual flavors because you’d never know when you come across a winner. And it seems like no one is holding back when it comes to coming up with unique flavors. We pulled together 10 bizarre and unusual potato chips from around the world that you can now get in Singapore, although we can’t guarantee that’ll they are all good!
1.  Chitato’s Indomie Mie Goreng Chips


Two of Indonesia’s giant food brands come together for a sensational bag of instant noodle-flavoured potato chips! Chitato’s Mie Goreng Chips is basically what we expected it to taste like: like a bag of Chitatos that someone emptied a pack of Mie Goreng seasoning into. Fans of Indomie will be able to pick out the notes of sesame oil, chili, soy sauce, and pepper as they crunch through the bag. One bag is definitely not enough and our only gripe is that they should be selling these in bigger packs.
WHERE TO GET IT: $0.85 for a pack at Sheng Siong or $1 from FairPrice
2. Walkers’ Marmite Chips 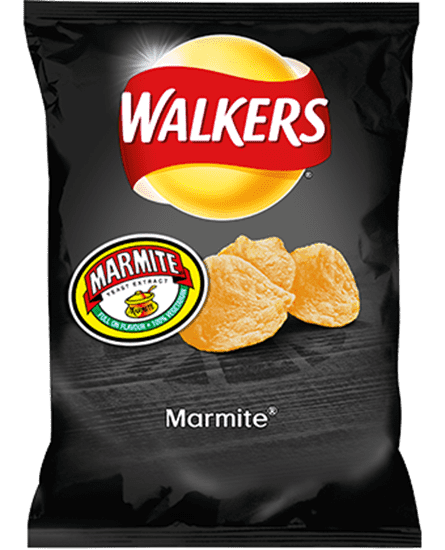 Love it or hate it, Marmite is a beloved staple in British households. And if you’re craving the taste of the intense dark spread, you can get a bag of chips that tastes like it was dunked in a vat of Marmite. We’ll leave it to you to decide if you like or hate it.
WHERE TO GET IT: $2.50 a bag from Lazada or Tuck
3. Tyrrells Hand Cooked Potato Chips – Pesto & Parmesan 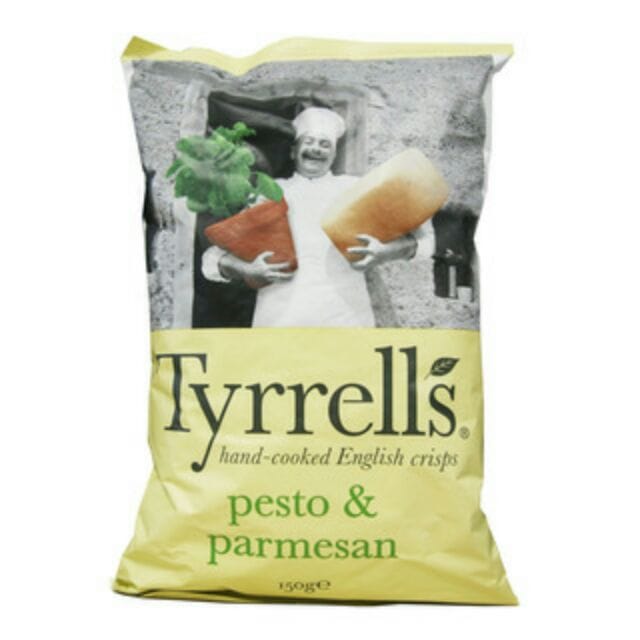 These chips from Tyrrells reminds us a little of pasta with its pesto and parmesan flavors. Made with all natural ingredients, Tyrrells shines the spotlight on the bold fragrant pesto, throwing in some parmesan for an extra punch.

WHERE TO GET IT: $4.95 a pack from NTUC FairPrice
4. Calbee’s Kanagawa Shumai (Traditional Chinese Dumplings Siumai) Potato Chips 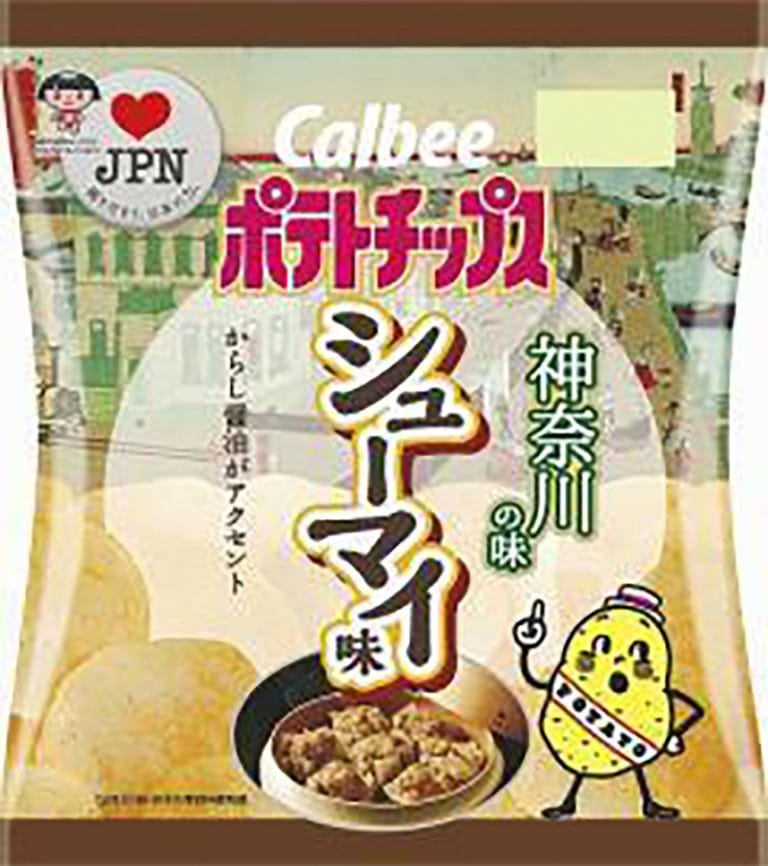 Calbee takes the traditional Chinese dumpling also known as Siew Mai and turned it into a meaty chips affair. The intense meaty aroma is stronger than your typical pork or shrimp chips, making it easy on the tastebuds.

WHERE TO GET IT: $2.85 at select NTUC FairPrice and select Japanese snack stores
5. Calbee’s Mentaiko Mayonnaise Pizza Flavoured Potato Chips 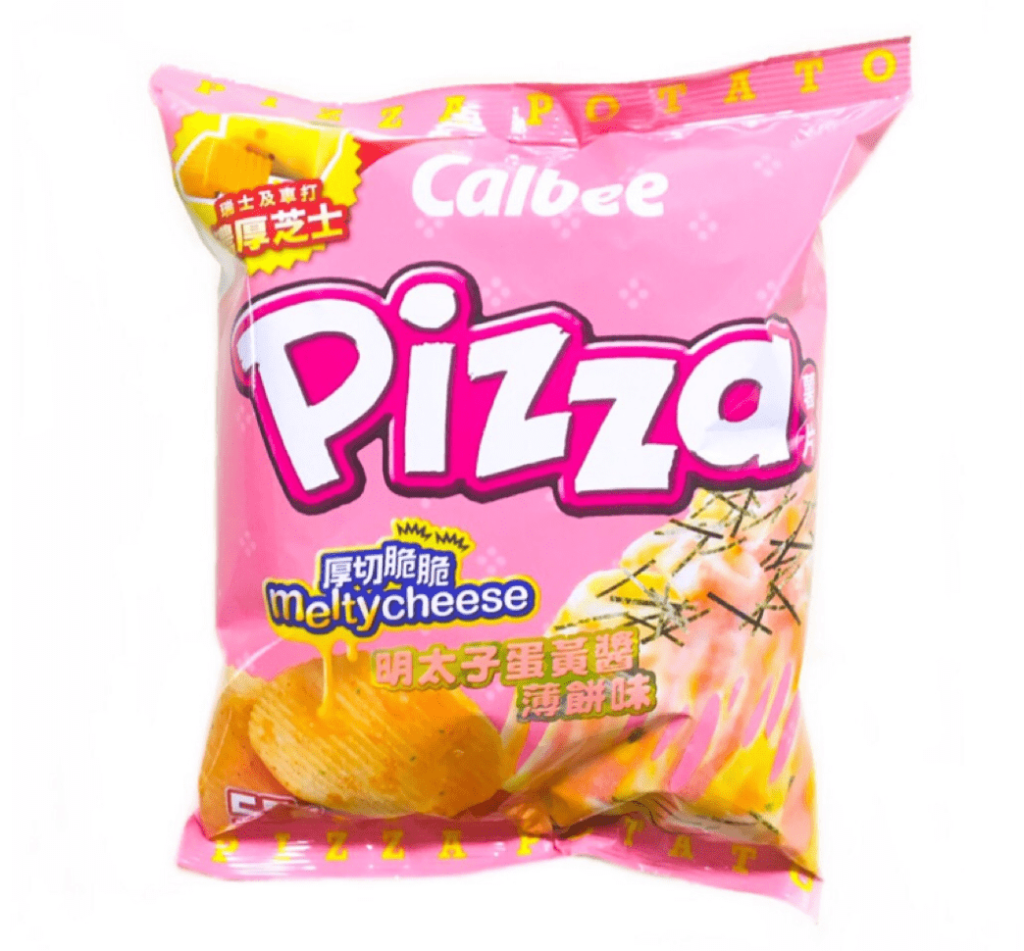 We reckon that the product development team decided to randomly draw slots to get an eccentric trio of mentaiko, mayonnaise, and pizza for this bag of chips flavor. According to the picture on the pack, the chips also supposedly has melted cheese and seaweed flavors. Sounds like there’s a pizza party going on in there.
WHERE TO GET IT: $4 a pack from Shopee
6. Guinness’ Rich Chili Hand Cooked Potato Chips


Stout-flavoured chips with a kick! Guinness has partnered up with Burts Chips for the perfect snack to nibble on with a pint of Guinness. The thick cut potato chips is flavored with the same blend of roasted barley and hops that’s used in your can of Guinness with a touch of jalapeño chillies to spice up your drinking nights.
WHERE TO GET IT: $6.35 a pack from NTUC Fairprice and RedMart
7. Great British Crisp Simply Fish And Chips

Get a taste of the Fish and Chips, Great Britain style with this pack of chips! The salty and vinegary chips is more citrusy than fishy, but that’s how the British like their fish and chips (our Asian tastebuds are catered to potently fishy snacks like the dried fish fillets snack).
WHERE TO GET IT: $4.95 a pack from RedMart
8. Cosmos Yoghurt Potato Chips

Yoghurt drinks are so popular in Korea that there are plenty of yoghurt flavored snacks, including this yoghurt-flavoured potato chips from Cosmos. These chips are going to be sweet instead of savory, and are definitely a must-try for yoghurt drink lovers!
WHERE TO GET IT: $4.60 a pack from Shopee and at SHINE Supermarkets
9. Lays India’s Magic Masala

Depending on which country you go, Lay’s has plenty of interesting flavors. The India’s Magic Masala from India is very popular for its spicy mix of cumin, coriander, chili, garlic and onion that’s sure to taste like curry spice that you get in an Indian restaurant.
WHERE TO GET IT: $1.35 a pack from Lazada
10. Savoursmiths Wagyu Beef With Honey Mustard

Luxury chips brand Savoursmiths take on the highest grade of Japanese wagyu beef, pairing it with honey mustard for sweet, meaty punch. And it’s so much more wallet-friendly than a meal of wagyu beef at just $3.50 a pack!
WHERE TO GET IT: $3.50 a pack from Dean and Deluca 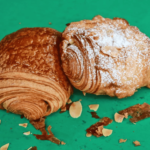 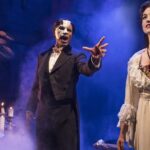