https://www.youtube.com/watch?v=7ILi937ZaXY&feature=youtu.be
More often than not, the most insightful holiday entails travelling to offbeat cities in flourished countries, getting lost and fully absorbed in the local atmosphere. With its rich heritage and colourful culture, Asakusa exudes a rustic old charm that plays a good contrast to the skyscrapers, bustling streets and neon lights in metropolitan Tokyo – here are 6 ways to take in this charming air of old-time Tokyo.
1. Asakusa Rickshaw Tour

Invented in the 19th century, Jinrikisha (人力車; man-power-car) ride was commonly used as a convenient and economical mode of transport, before it spreaded to Asia, beyond and eventually discontinued due to the perception that it condemns humanity. However, the Japanese decided to restore this unique way of transport and hence rickshaw rides are now seen back in capitols of Kyoto, Kamakura and Asakusa.
Imagine cruising through Asakusa’s iconic aged entertainment grounds “Rokku” and the Hanayashiki amusement park before entering the quaint backstreets filled with neo-French and Italian cafés mix with generations-old soba and tempura shops, all in the comfort of a traditional rickshaw. Most of the rickshaw drivers, “Shafu” are cheerful, professionally-trained and more than willing to share about what this colourful old town offers, with almost all of them being able to converse in eloquent English.
With its exclusivity in Japan, take this chance to experience a brief yet engaging 12 minutes ride (¥4,000 for 2 adults) with any short pocket of time or relieve the full-blown beauty of Asakusa in a leisure 120 minutes course (¥32,500 for 2 adults) that covers almost all the highlights of the town – including Kaminarimon Gate, Geisha Town and the Tokyo Skytree.
Get the high eye point of this precious old town with prior reservations from Ebisuya, Klook or Voyagin.
2. Read your Omikuji Fortunes at Sensoji Temple

“Senso” is an alternative reading for Asakusa while “ji” means temple. Built in the 7th century, Sensoji Temple – also known as Asakusa Kannon Temple, is Tokyo’s oldest and most popular temple. Nakamise, Asakusa’s bustling shopping street, stretches from the temple’s outer gate to its second gate, the Hozomon.

Omikuji, paper fortune, is one of the highly regarded Japanese culture that can be commonly seen in temples and shrines throughout Japan, especially during the New Years period. After you make your prayer, drop your donation (usually ¥100) into the money collection box to get a box filled with numbered sticks. Shake up the box several times before you see a stick emerge from the opening, which will present a specific number. Afterwhich, retrieve an Omikuji slip from the drawer labelled with the number you have picked, which on it shows a prediction of your fortune.

3. Shop and eat your fill at Nakamise Dori 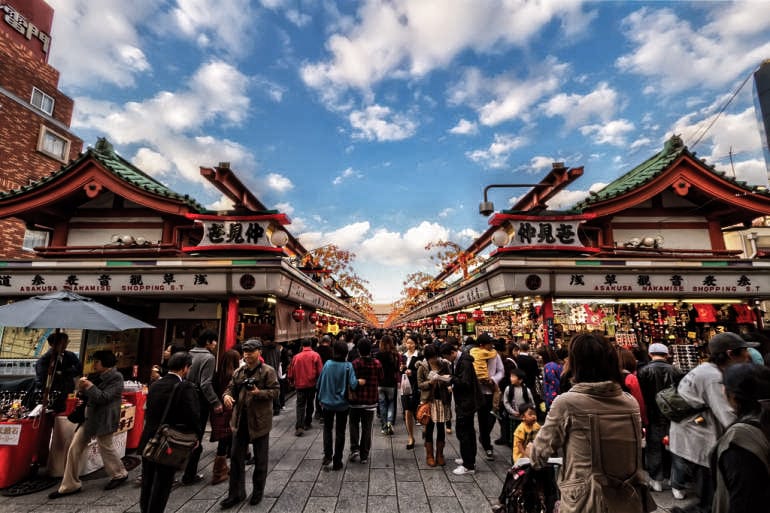 This iconic 800-foot shopping street that leads to Sensoji Temple features at least 90 shops that sells a wide variety of souvenirs, snacks and of course, Japanese street food.

Comb up some unique souvenirs for your colleagues – think Japanese snow sandals (Yukata) , wrapping cloth (Furoshiki) , swords (Katana) and a carefully-crafted wind chime or treat yourself to an Age-Manju in seasonal flavours like the sakura and pumpkin – how apt?

Further eat your way among the plentiful street food options with sticks of pastel Dango and the popular Japanese snack, Senbei (rice crackers) which might even be roasted on the spot, before washing them all down with what the Japanese makes best – a sweet, cool cup of green tea.

In periods of November, watch out for the Tori No Ichi Fair, where you can witness the Japanese custom of small business owners buying a bamboo rake decorated with lucky symbols to rake in good fortune, followed by the New Years Market happening near end December where the market will be selling traditional festive items.

4. Explore the bustling Asakusa streets in a Kimono

The perfect picture one can take in Asakusa is inevitably a well-angled shot of you and your loved ones happily drowned in a shower of cherry blossom petals under the gentle rays of late-afternoon sun and most importantly, all dressed in an intricate Kimono.
While the ladies will be ecstatic to know that tabi, zori, bags and hair accessories are usually included in the Kimono rental, their partners are not deprived of experiencing Asakusa the authentic way. Most of the Kimono rental stores also offer the male-equivalent costumes, so guys out there – you need not stay behind the camera anymore.

To top it off, some of the rental studios do offer complementary luggage storage and optional professional hairstyling and photoshoot packages, making your virgin Kimino experience an enjoyable and fuss-free one. Rental of Kimono typically costs ¥3,500 for a 2 hour rental, or take your time to strut around in your new favourite ensemble at ¥5,000 for a half-day rental.

Kimino rental shops are aplenty in Asakusa – but if you prefer to secure your hands on a set of this Japanese traditional costume prior to your trip, feel free to reserve them from VASARA, IZA Asakusa Kimono Rental, BIREI Kimono & Culture and Asakusa Rental Kimono Koto.
5. Visit the Asahi Beer Super Dry Hall 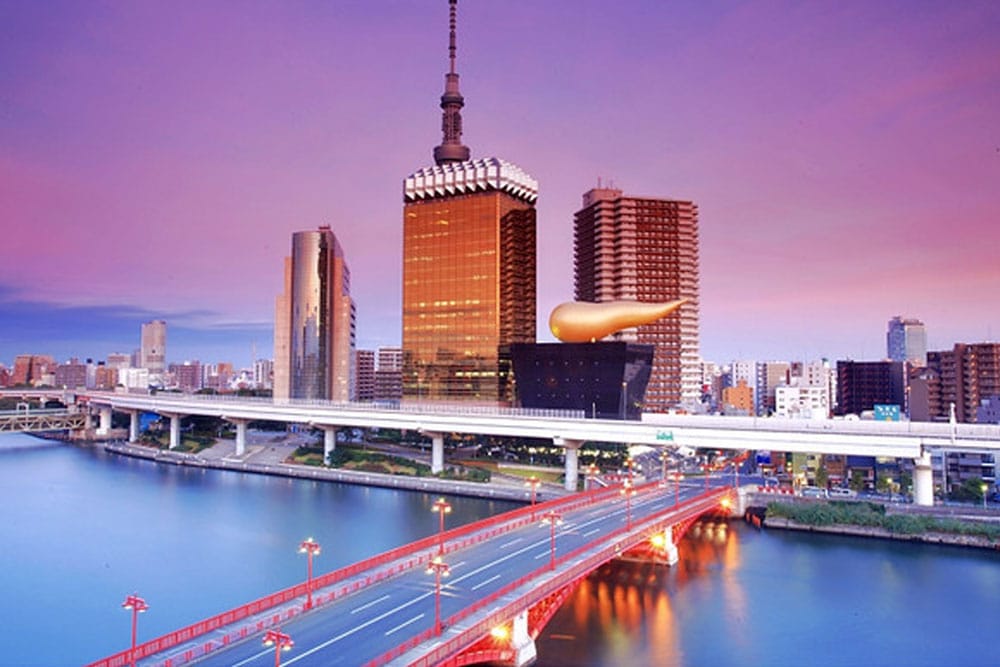 Home to the Japanese beer brand, Asakusa is picked as the prime location for the Asahi Beer Headquarters, and rightfully so – a place where the company has been making beer for over a 100 years.
Level 1 features an exhibition detailing the history of the Asahi Beer company and their efforts into environmental protection while levels 1 & 2 house a bar where you can try some limited run Asahi beer. A more luxurious rendition can be found on the 22nd floor, where your Asahi experience comes complete with an amazing view.
Accessibility to the Asahi Beer Headquarters proved pretty convenient as well, with just a 5 minutes walk from the Asakusa Station (Exit 5) on the Ginza Subway Line.
Asahi Super Dry Hall
1-23-1 Asahi Beer Hall, Azumabashi, Sumida-ku, Tokyo

6. Soak in the atmosphere in one of their many festivals
Sumida River Hanabi

Drawing 1 million people to the banks of Tokyo’s Sumida river each year, there is no reason to miss the world’s oldest fireworks festival when you are in Asakusa. Originally intended to liften the spirits of the residents after the repercussions from a famine in 1733, it marks an inaugural festival to the Asakusa calendar of events from then on. The mix of fireworks is impressive (~20,000 of them) with some of them reaching as high as 600m into the night sky.
People do mean it when they say the Japanese have a cutting edge in almost all innovations – expect to see Niagara sparklers set under bridges to resemble the famous waterfalls, as well as formed shells that burst into familiar shapes such as hearts, smiley faces and cartoon characters.
Nothing else completes a spectacular fireworks festival more than food and games stalls. Crane your neck towards the night sky as you grab a Japanese sake with a fresh melon pan.
Turn up early to scout for a seat, as what others do. Expect to see a huge crowd, with a good proportion of them turning up in Yukata – adding on to the strong Asakusa flavour.
Sumida River Hanabi
When: usually the last Saturday of July annually
Location: Sumida River
(5 minutes walk from Asakusa Station)
Hours: 1900 – 2030
Entry: Free
Asakusa Samba Matsuri

Attracting almost 500,000 visitors each year, it is a popular summer festival that celebrates the strong cultural ties between Brazil and Japan. As the former is home to the largest Japanese community outside of Japan, it has brought about significant influence to the people of Asakusa – Samba is increasingly becoming a common hobby in Tokyo, and hence Asakusa.
Featuring thousands of musicians and dancers in elaborate costumes, each year will see approximately 20 teams competing in the samba parade contest. With competitors flocking from all over Japan, rest assured these lovers of samba rhythms will put up a show as stunning as their costumes.
Asakusa Samba Matsuri
When: usually the last Saturday of August annually
Location: Kaminarimon, Taito-ku, Tokyo 111-0034
(5 – 6 minutes walk from Tawaramachi Station/Asakusa Station)
Hours: 1300 – 1800
Entry: Free