Growing up, Cartoon Network pretty much ruled our childhood years. We spent most of our days glued to the TV screen, religiously following every Ben 10 episode, and embarked on a life quest to own every single Powerpuff Girls merch out there.
We may have stopped watching (or have we?) our favourite cartoons, but these beloved heroes still hold a very dear place in our hearts. While we can’t turn back time, the world’s first Cartoon Network Amazone Waterpark in Pattaya, Thailand is essentially our entire childhood in a waterpark – one is never too old for cartoons and water slides. 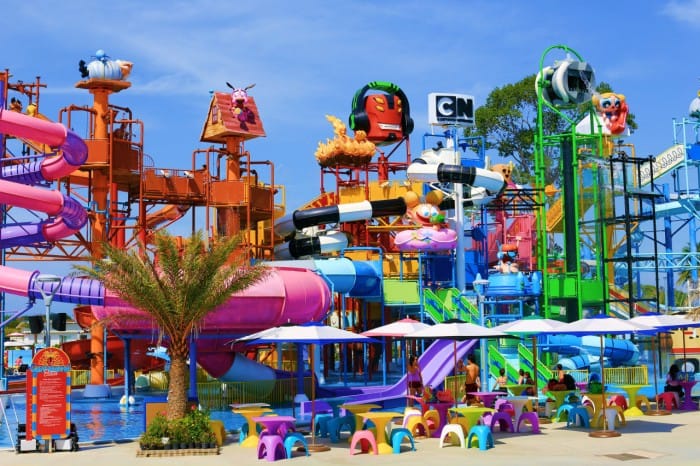 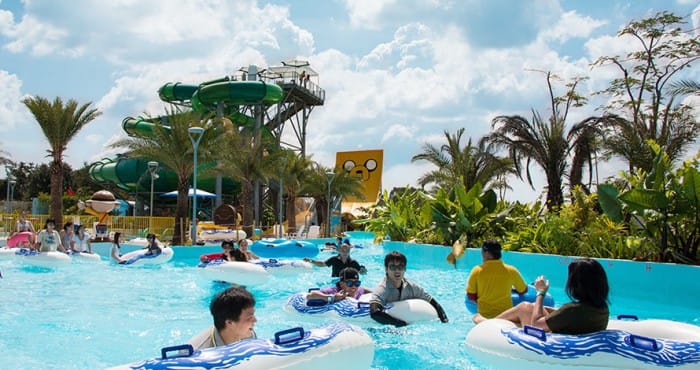 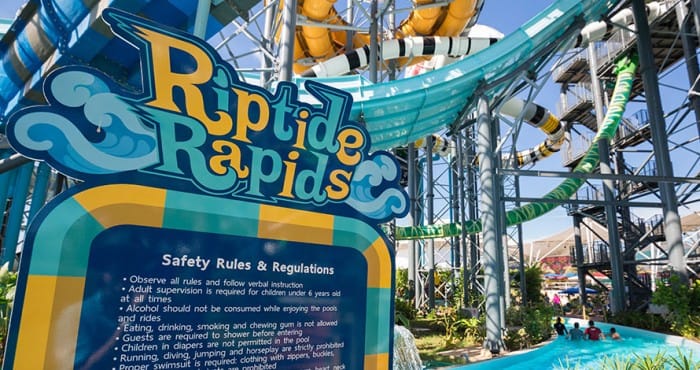 Riptide Rapids is the ultimate chill out zone, where guests can cruise down the continuous flowing river that winds around the park. Inner float tubes are available at any of the landings along the 335-metre route, so grab one and drift down the lazy river as you take in the eclectic park atmosphere.
Serious adrenaline junkies looking for a heart-pounding experience, the Omniverse Zone is all yours. This Ben 10-themed section is home to six of the fastest and steepest water tube rides in the world. 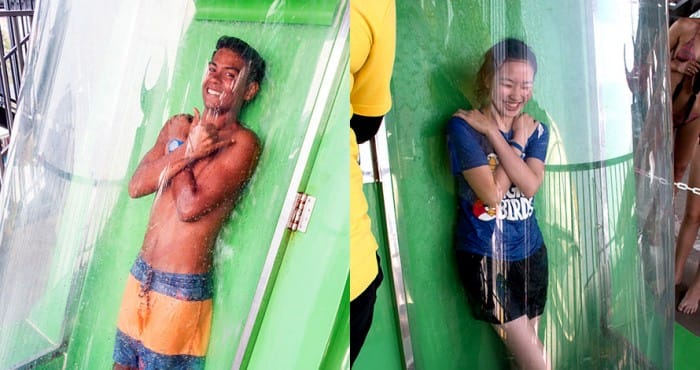 The Goop Loop will send you free falling when the trap door releases below your feet, followed by an instant 360-degree loop. Riders will plunge to a splash landing from 60 feet above on the XLR8-tor. 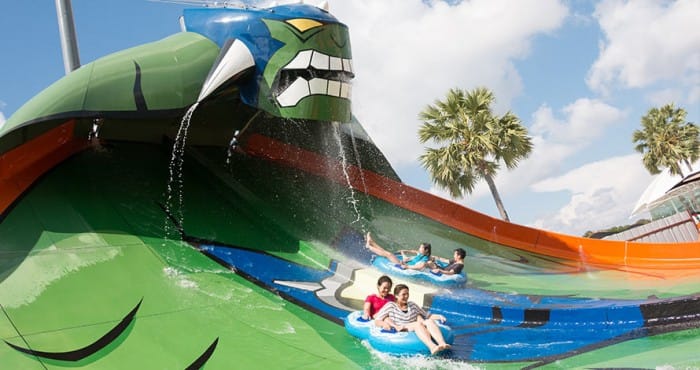 The Humungaslide, a high-speed dual lane raft slide, will race riders on two rafts down many twists and turns before sending them down a stomach-churning, 26-foot drop at the end. 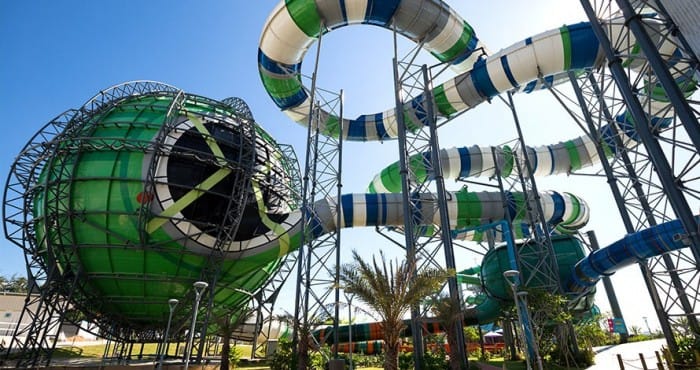 The Omnitrix will have you and three other friends riding on a raft through a tube that eventually ends with an electrifying blast into a giant, 23-meter tall sphere – and you thought it was a waterpark for kids. 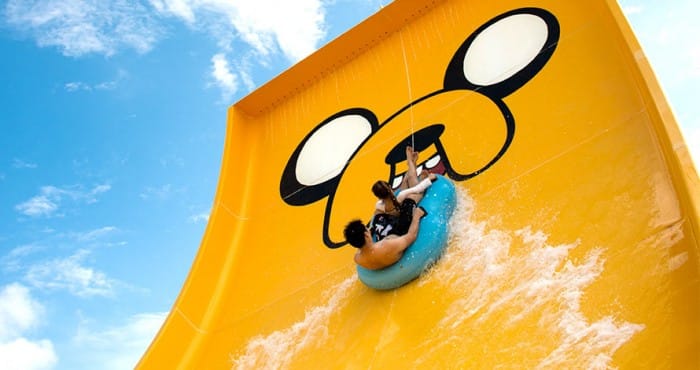 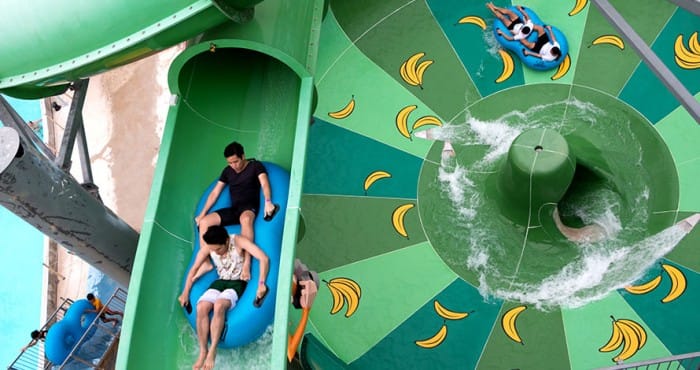 Over at Adventure Zone, Adventure Time and Johnny Bravo fans will love the three water slides themed around these iconic characters. Go weightless with Jake on the Jake Jump, a high-speed raft ride that begins with a vertical burst and ends in a heart-stopping drop into a giant splash pool. 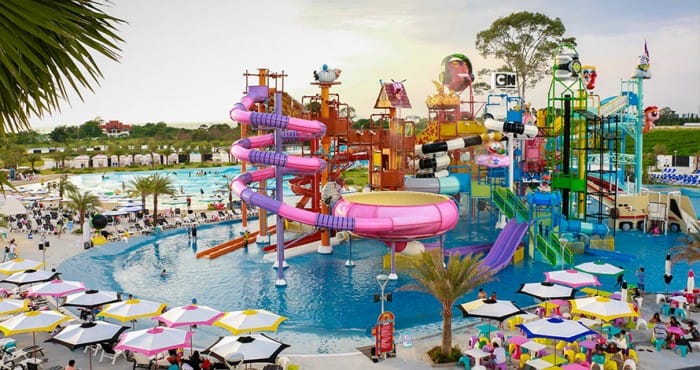 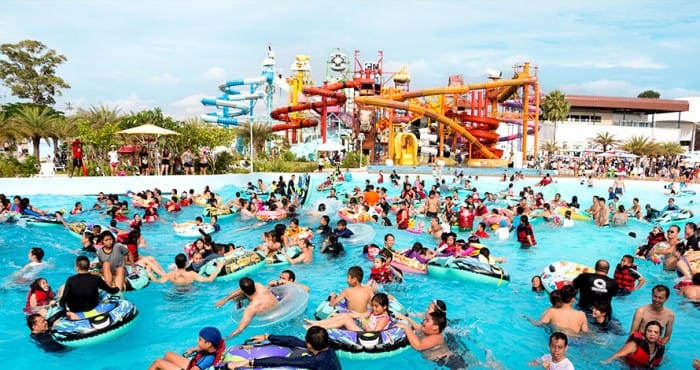 Apart from water slides, the park also houses Mega Wave, a beach-stimulating wave pool where you can bob up and down the gentle waves sans salt water, riptides and sharks. Continuing with the beach theme, Surf Arena has a double flowriding surf-stimulator – grab a pal and ride some sick waves in this man-made surfing zone. 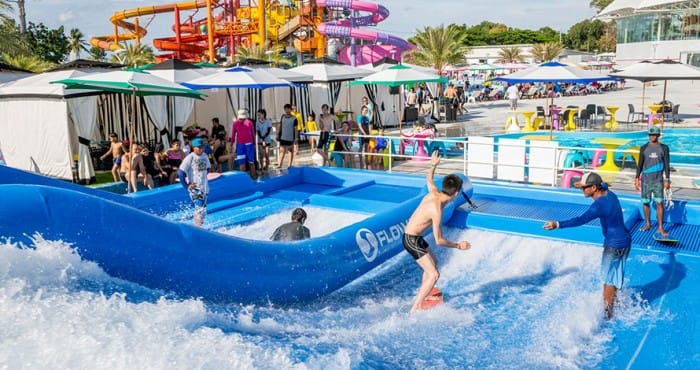 Of course, these water rides and features would not be complete without the headline attraction – Cartoon Network characters we have all grown to love. Mascot meet-and-greets are held at various times throughout the day, and live entertainment shows will also be staged around the park. We heard that The Powerpuff Girls will be having their own pop concert, and Ben loves hanging around the Surf Arena (just saying).
After hours of non-stop water action, take a break at the waterpark’s food arena, Foodville. Highlights include Dee Dee’s Cafe, where you can quench your thirst and fill your tummies with coffee, frozen shakes, slurpees, cakes and crepes. Cool down in the heat with super sundaes and frozen chocolate desserts at Dexter’s Ice Lab, an ice cream parlour inspired by Dexter’s laboratory. 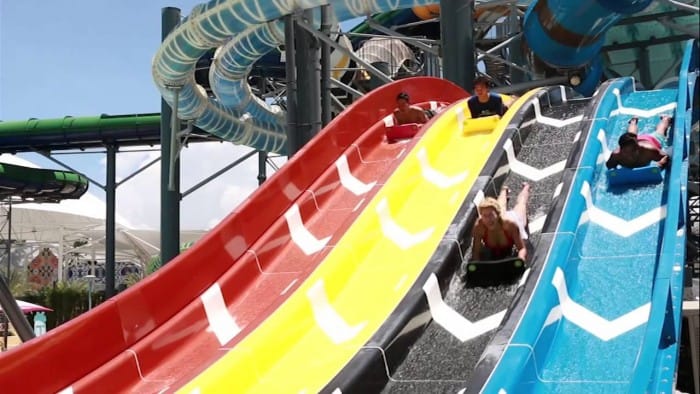 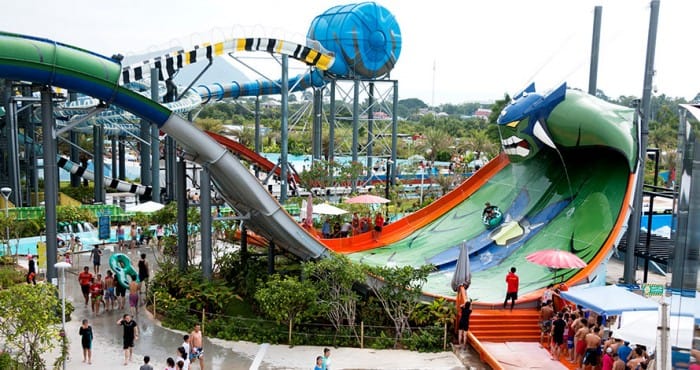 Cartoon Network Amazone is located in the small seaside town of Bangsaray and daily shuttle bus services are available from Pattaya City. The next time you’re itching for a quick weekend getaway, we reckon this waterpark is a thrilling alternative from the usual beach resorts in Thailand. I mean, your childhood dreams are just a two-hour plane ride away.
Cartoon Network Amazone
888 Moo 8, Najomtien, Chonburi, Thailand 20250
Hours: 10AM-6PM
Tel: +66 (85) 367 1611
Email: onlineticket@cartoonnetworkamazone.com
Get your tickets here
Post is proudly brought to you by Klook
Photos from Cartoon Network Amazone