Also known as the most underrated way to have your potatoes, rösti is a Swiss dish made of grated potatoes, and fried as a fritter. It is usually served as a side — a worthy replacement of the mundane mashed potatoes you’d usually have instead.
With its rarity in Singapore, passionate consumers of rösti can hardly indulge in this potato pancake as much as they’d like to. But we’ve got you covered now — here’s 7 places where you can find this scrumptious carbohydrate.
The Rösti Farm 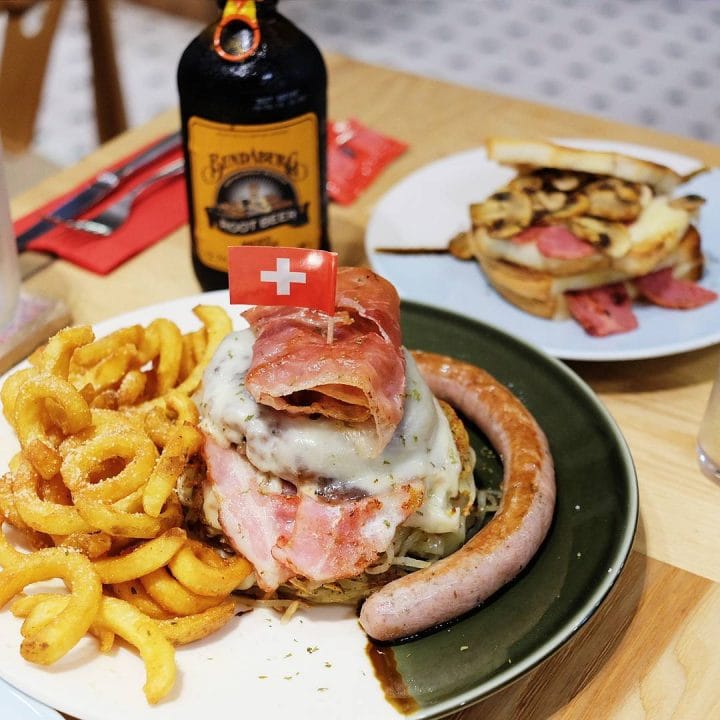 You probably saw this one coming. But as the only F&B outlet in Singapore that specialises in rösti, it deserves its place on this list. Although normally treated as a side-dish, rösti takes centre-stage at The Rösti Farm.
The dishes are constructed with a choice of either single or double rösti, with plenty of other elements to boot. One can either opt for the minimalistic with Cervelat Swiss National Sausage ($11/$14), or have their rösti paired with everything from smoked salmon, German sausages, or Angus beef.
Prices are around the $20 range, and just a word of advice: don’t underestimate how filling a single rösti can be. Of course, most of you first-timers would probably still impulsively get the double rösti anyway. We’ll let experience teach you.
Address:
Waterway Point
83 Punggol Central
#B1-K12 East Wing
Singapore 828761
Opening Hours:
(Waterway Point)
Mon–Fri: 1130–2100
Sat–Sun: 1030–2130
(Capitol Piazza)
Mon–Sun: 1200–2000 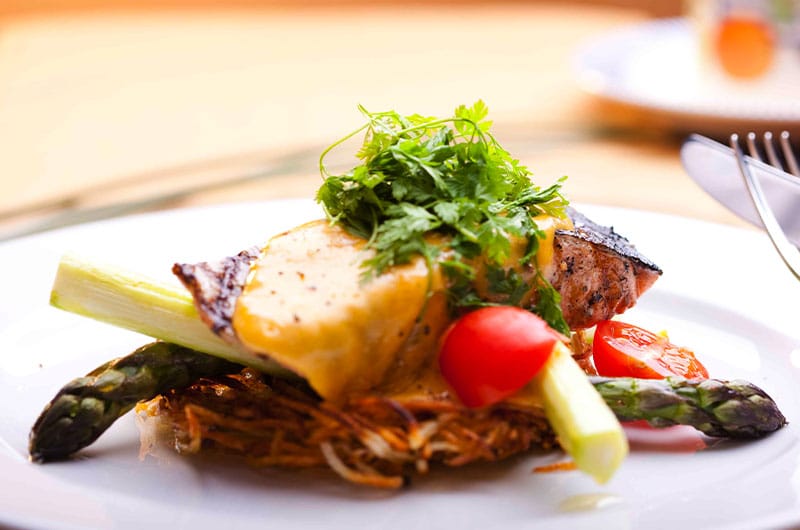 Rösti at Wild Honey is served in a single dish — the Scandinavian ($26). What is served is a fresh salmon fillet and some asparagus sitting atop a bed of potato rösti, the fillet cloaked in hollandaise sauce.

The rösti here tends towards the crispier side, as opposed to the buttery texture that can be found at The Rösti Farm. It is not at all greasy, perhaps better suiting those who can’t bear the guilt of chowing down fried potatoes drenched in Swiss cheese. 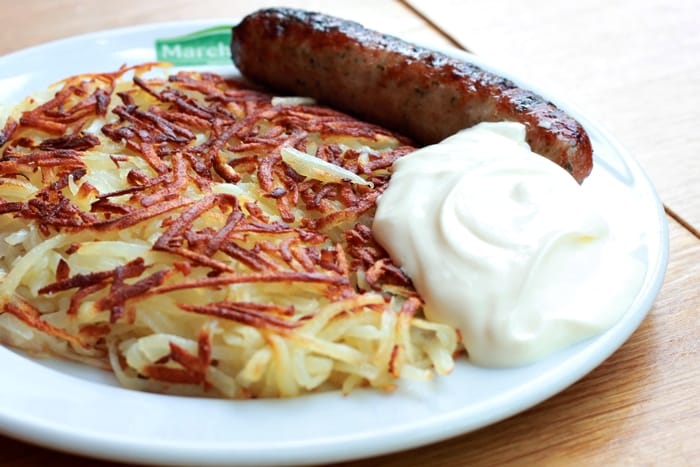 Yet another given on this list, Marché is the place to go to satisfy any rösti cravings, due to its convenience owed to its numerous outlets.
The most value-for-money decision would be to get the rösti in its unadulterated form — plain, with a dollop of sour cream at the side — setting you back $7.90. The potato pancake served is rather large, and can definitely fill you up more than you’d imagine.
Another wise decision would be to opt to share the rösti with your friends, and have other dishes from Marché to go along with it. That is, if you think that a mere potato pancake won’t satisfy you. We wouldn’t be surprised if you visit Marché just to eat the rösti anyway.
Addresses:
313@Somerset
VivoCity
Suntec City
Jem
Raffles City
Opening Hours:
Mon–Thurs: 1100–2300
Fri: 1100–2400
Sat: 1000–2400
Sun: 1000–2300
Contact: Several
Website: http://www.marche-restaurants.com/
Facebook
Tolido’s Espresso Nook 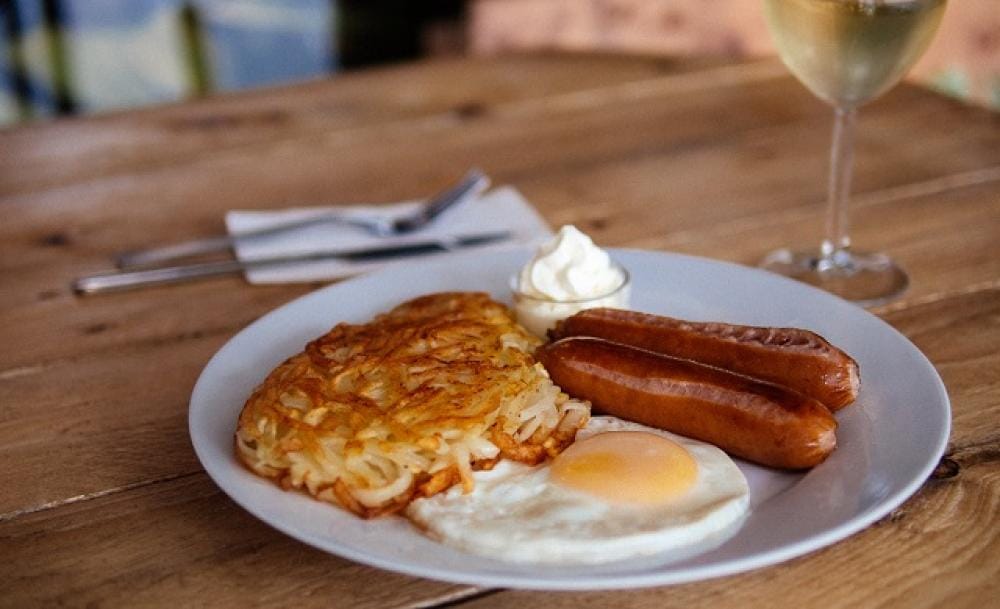 The rösti here at this cosy cafe is the perfect balance of crispy and buttery. Delicate charred edges form the exterior, and a soft, tender texture is revealed with a single bite, making for a marvellous taste that some say trumps Marché’s.
Staying true to its identity as breakfast food in its homeland, this dish is served with an egg and a choice of either cheesy sausages ($14.90), bratwurst ($16.90), or smoked salmon ($20.90).
Address:
Tolido’s Espresso Nook
Block 462 Crawford Lane #01-63
Singapore 190462
Opening Hours:
Tue–Thurs: 0930–1900
Fri–Sat: 0930–2200
Sun: 0900–1830
Closed on Mondays
Contact: 6648 0178
Website: http://www.tolidosnook.com
Facebook
MUNCH Saladsmith & Rotisserie 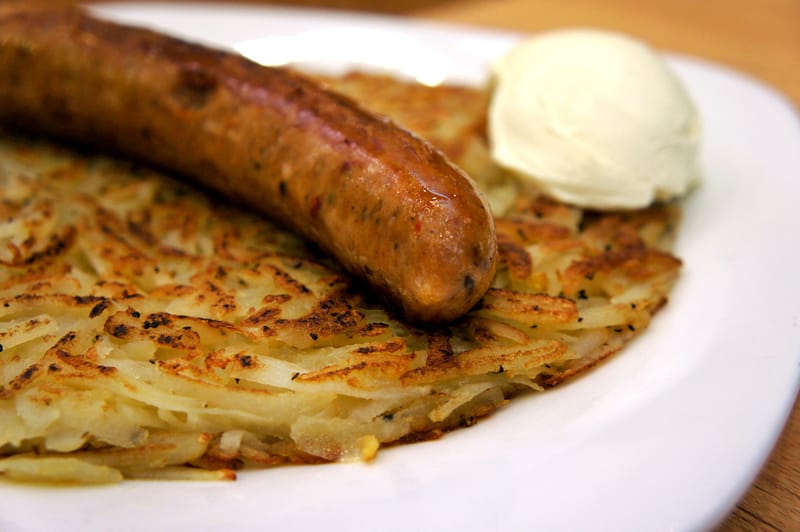 We’ve had rösti with bratwurst, rösti with cheese sausages, and rösti with smoked salmon. Here at MUNCH, even more options are available to you — Rosti with Roasted Chicken ($13.00), Rösti with Dory Fillet ($10.90), or Rösti with Salmon Slab ($14.90).

Portions are generous here, making the slightly less expensive prices even more worthwhile. If you’re not a fan of fish, you may get your rösti in a combo with a MUNCH salad ($12.50) or two ($15.60). Another interesting option would be the Swiss Breakfast Petit ($13.50), which serves scrambled eggs and bratwurst alongside your rösti.

A plus point would be that MUNCH offers delivery as well, enabling us to enjoy rösti in the comfort of our homes. 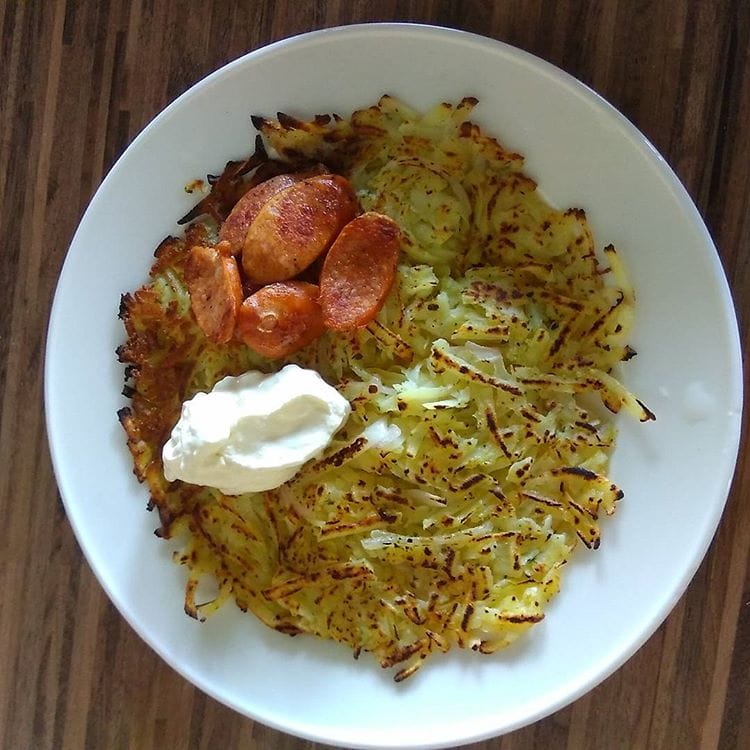 Otto Berlin Haus stands out from the rest in this list with one distinctive trait — it is actually a German-inspired store housed in a kopitiam at Toa Payoh.

Typical German fare is available here — pork knuckle, Oxtail Stew, and a variety of bratwursts. But in this article, we are only concerned about one thing on their menu — their rösti. 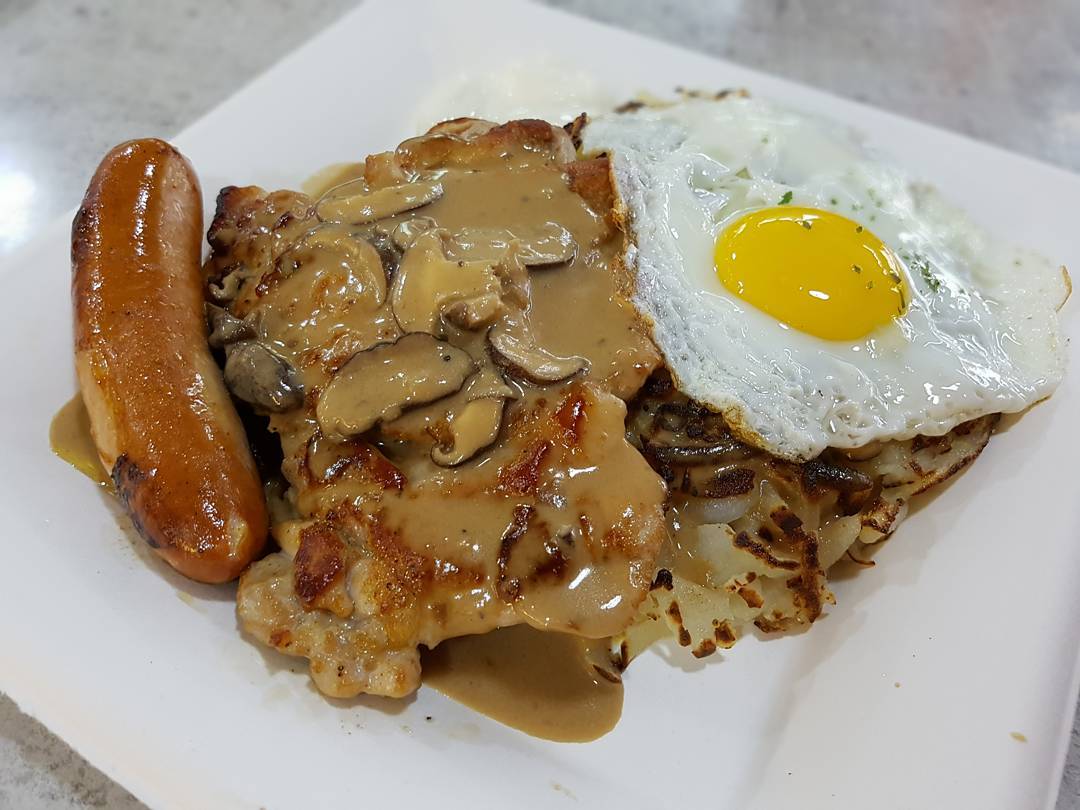 Similar to Otto Berlin Haus, Ivan’s Carbina is actually a Western cuisine store in a kopitiam. To think that Western fare from coffee shops have begun serving Swiss rösti on their menus! The times are evolving, and for the better.
While it’s easy to charge higher for a dish as sought-after as rösti, we can be thankful that the price is appropriate for the setting. At just $7.80, enjoy a hearty portion of rösti paired with a main dish of your choice. Options include Carbina’s Signature Chicken Chop, or Chicken Cutlet.
Other available combinations include Swiss Rösti with Sausage ($6.80). Hands down, Ivan’s Carbina is the best bargain on this list.
Address:
Blk 354A Woodlands Avenue 5
#01-01 Lucky Star Coffeeshop
Singapore 730354
Opening Hours:
Tue–Sun: 1100–2100
Closed on Mondays
Contact: +65 9048 0333
Facebook