The behind-the-scenes of being a popular YouTuber 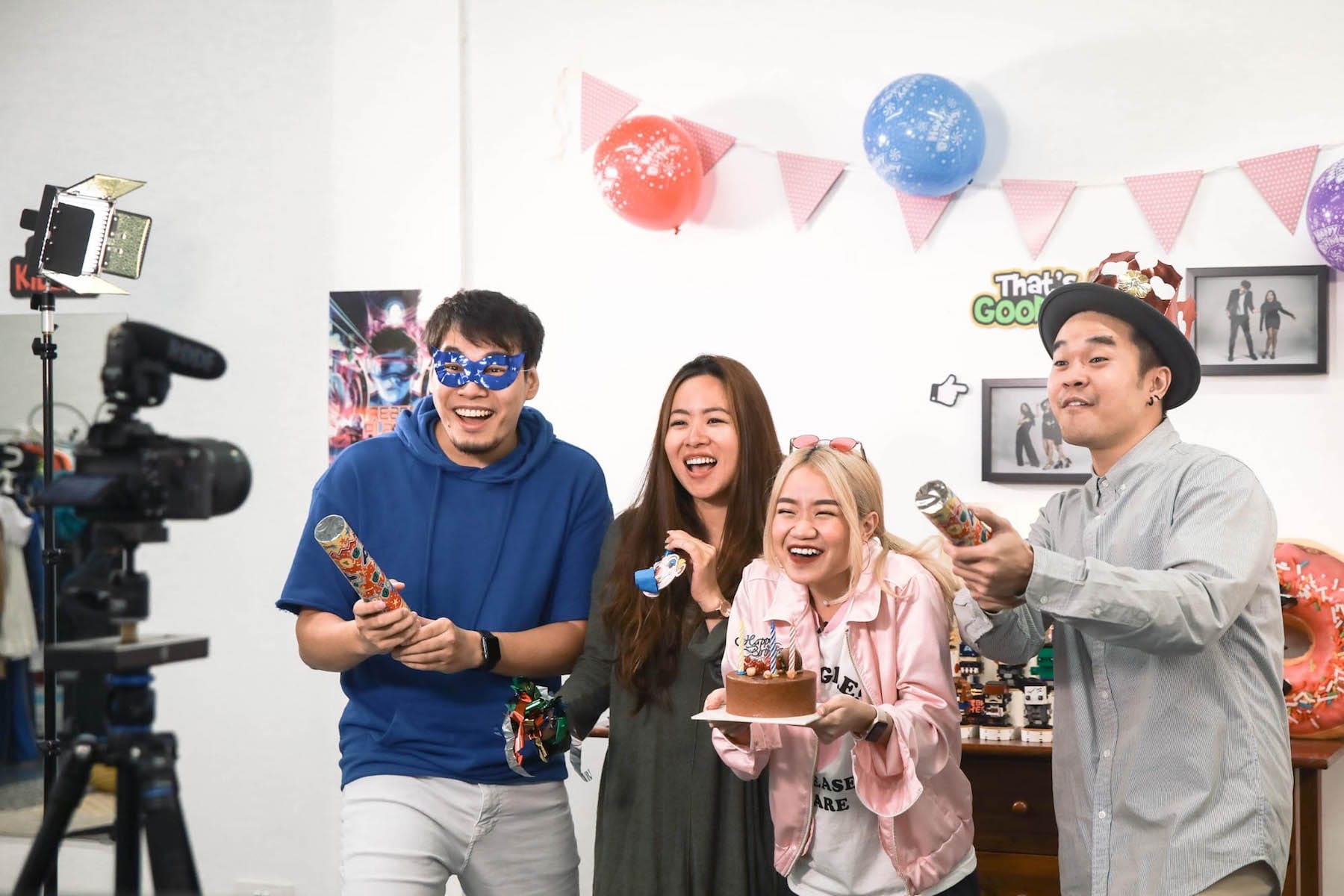 To many of us who are familiar with the pool of Singaporean YouTubers, Lingyi is no stranger. The co-founder and producer of Wah!banana, a huge fish in the scene with over a million subscribers and constantly trending videos, she’s the mother of the lot – and like most mothers, much of her hard work goes unnoticed. 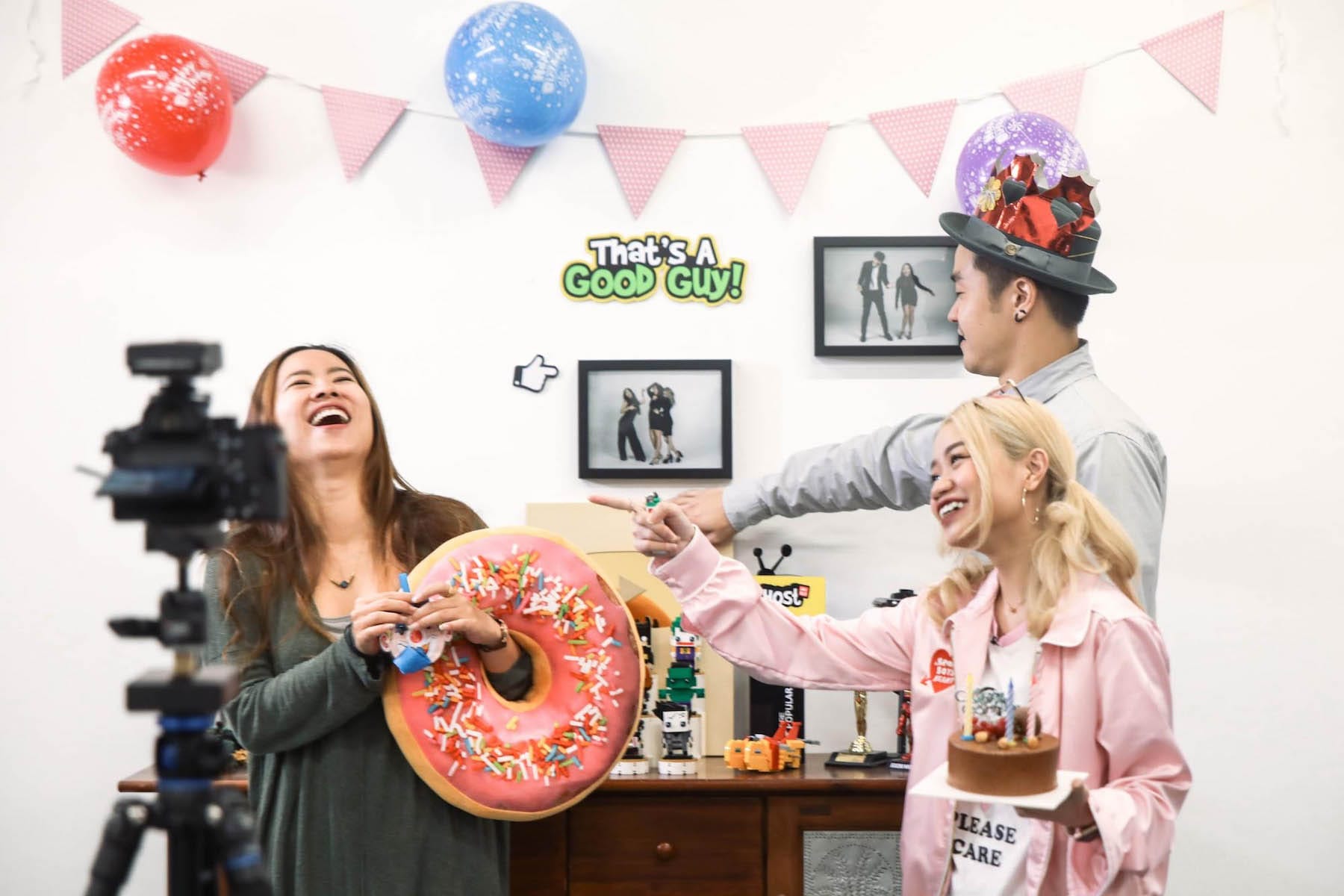 As viewers, we’ve never known how much she does, or what exactly she does, besides having fun on YouTube videos. But if viral videos were so easy to make, wouldn’t everyone be a star by now? Determined to find out what it takes to make trending, entertaining videos as a living, we arranged to follow her around on a typical workday of hers.
Here’s a glimpse into the life of Lingyi, the brain behind a successful YouTube channel:

A full plate at the start of the day 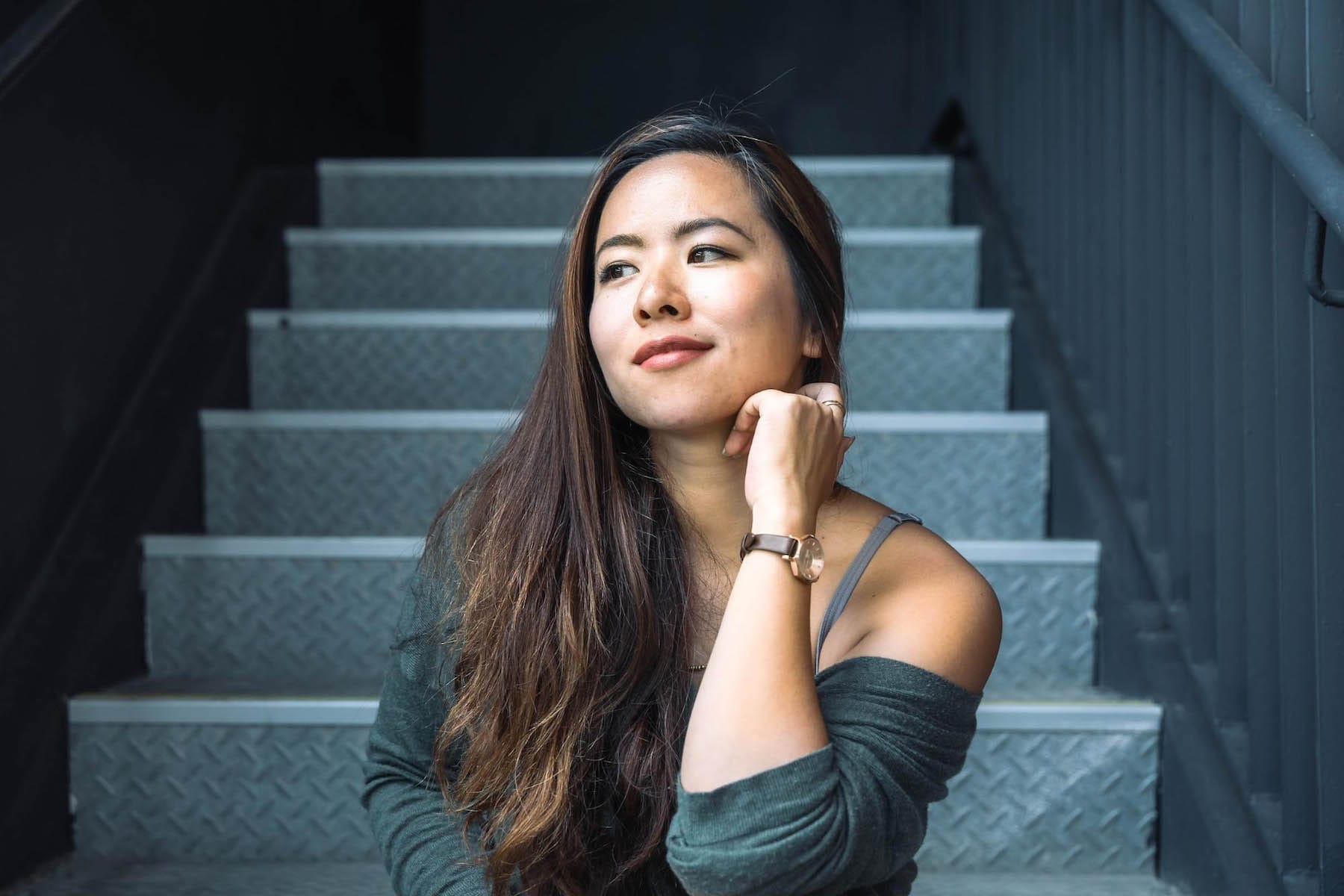 Even before I knocked on the door of her office, I was nervous. I knew I was going to meet a capable woman with a brilliant mind, and I was intimidated because she might be a stern, no-nonsense person.
“Hi, come on in!”, she smiled warmly.
My worries were uncalled for. Decked in a comfortable oversized top, slippers, and with no makeup on, she was friendly and approachable, and very busy. They have a client shoot today, she explained, gesturing towards a made up corner filled with party streamers and balloons. 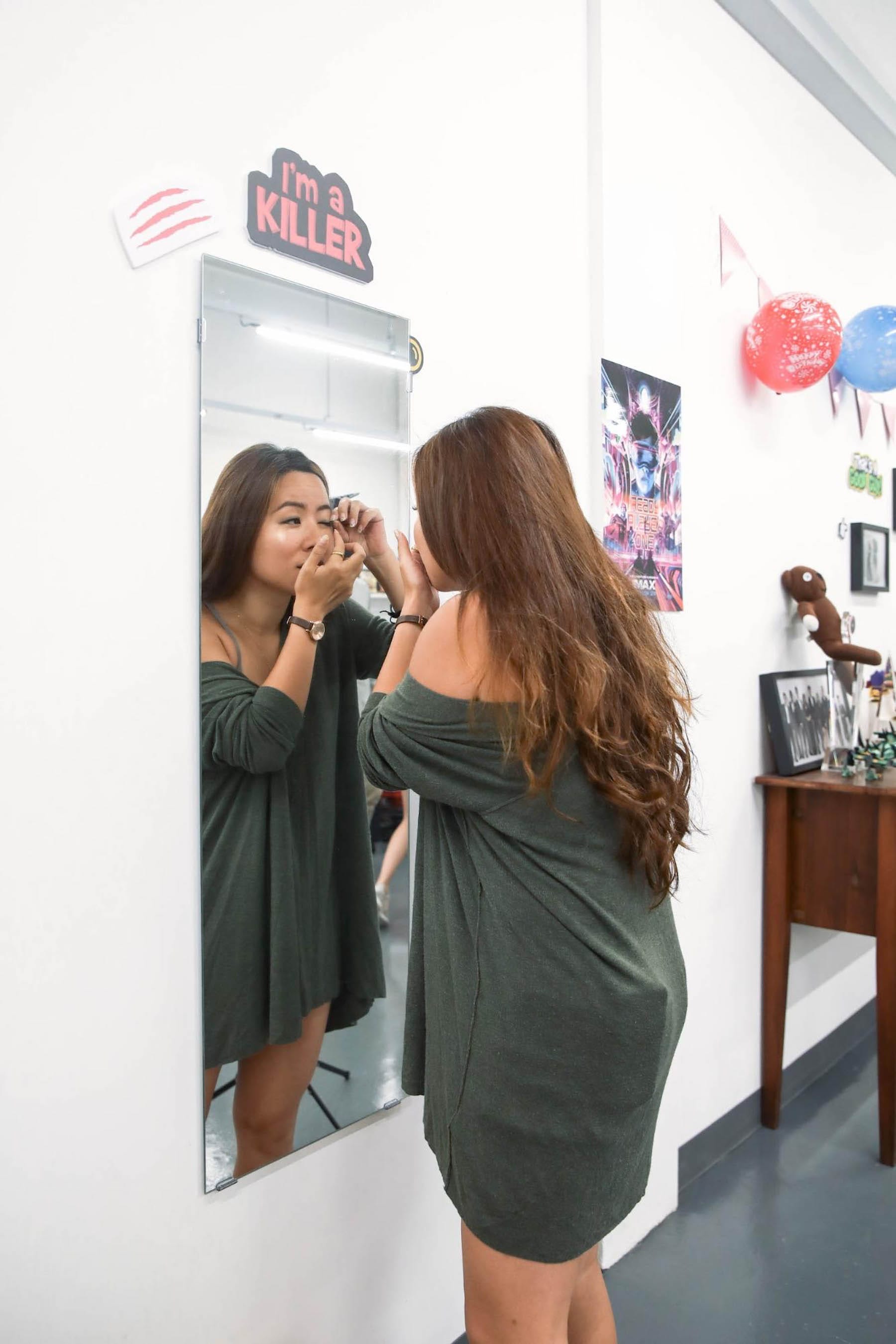 It was the scene of a birthday surprise, and I watched her flit around the room, confirming even the tiniest details of how the scene was going to play out, making sure the props were in place, and putting on her makeup for her role as ‘Friend X’. 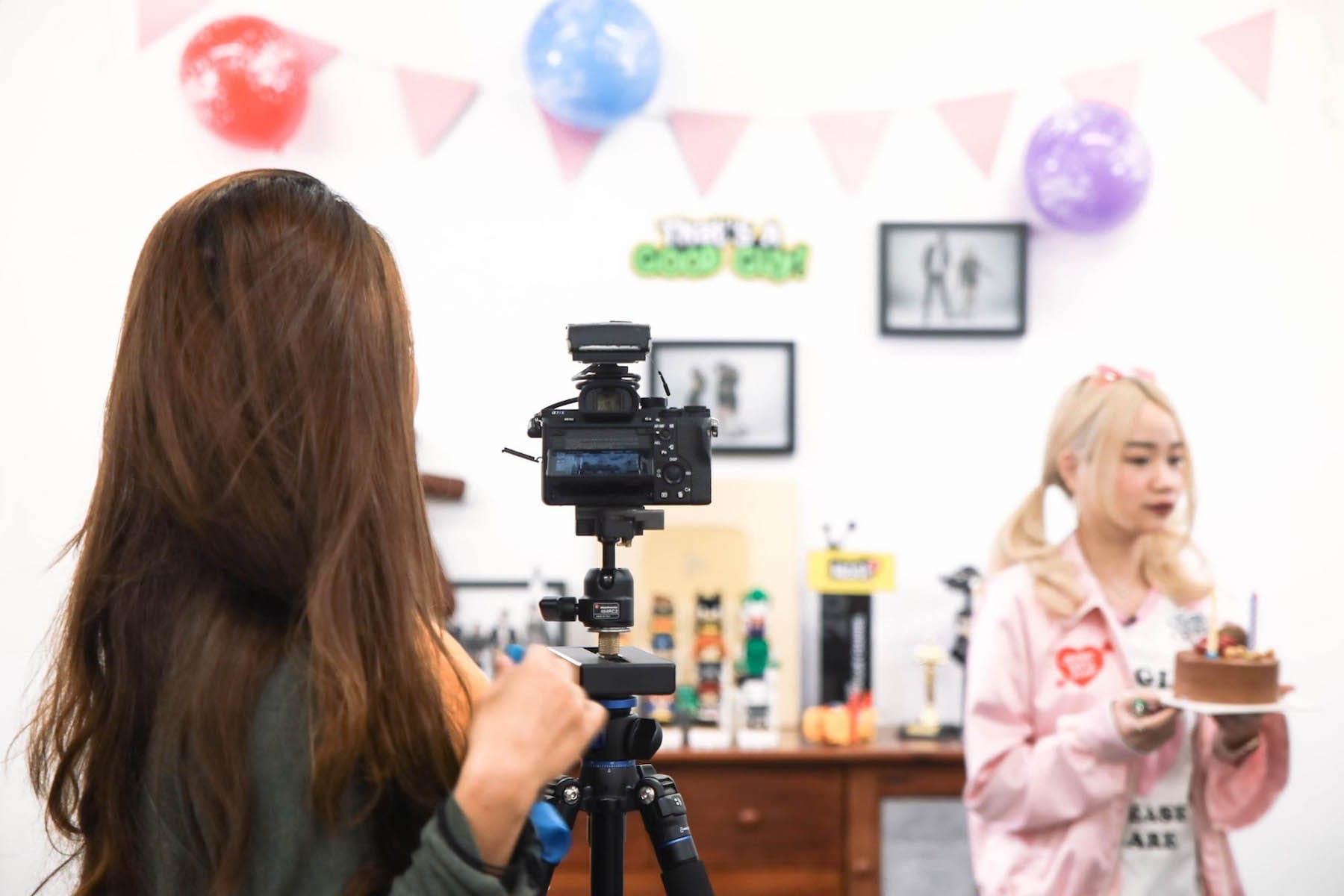 Lingyi checking the framing of the shot 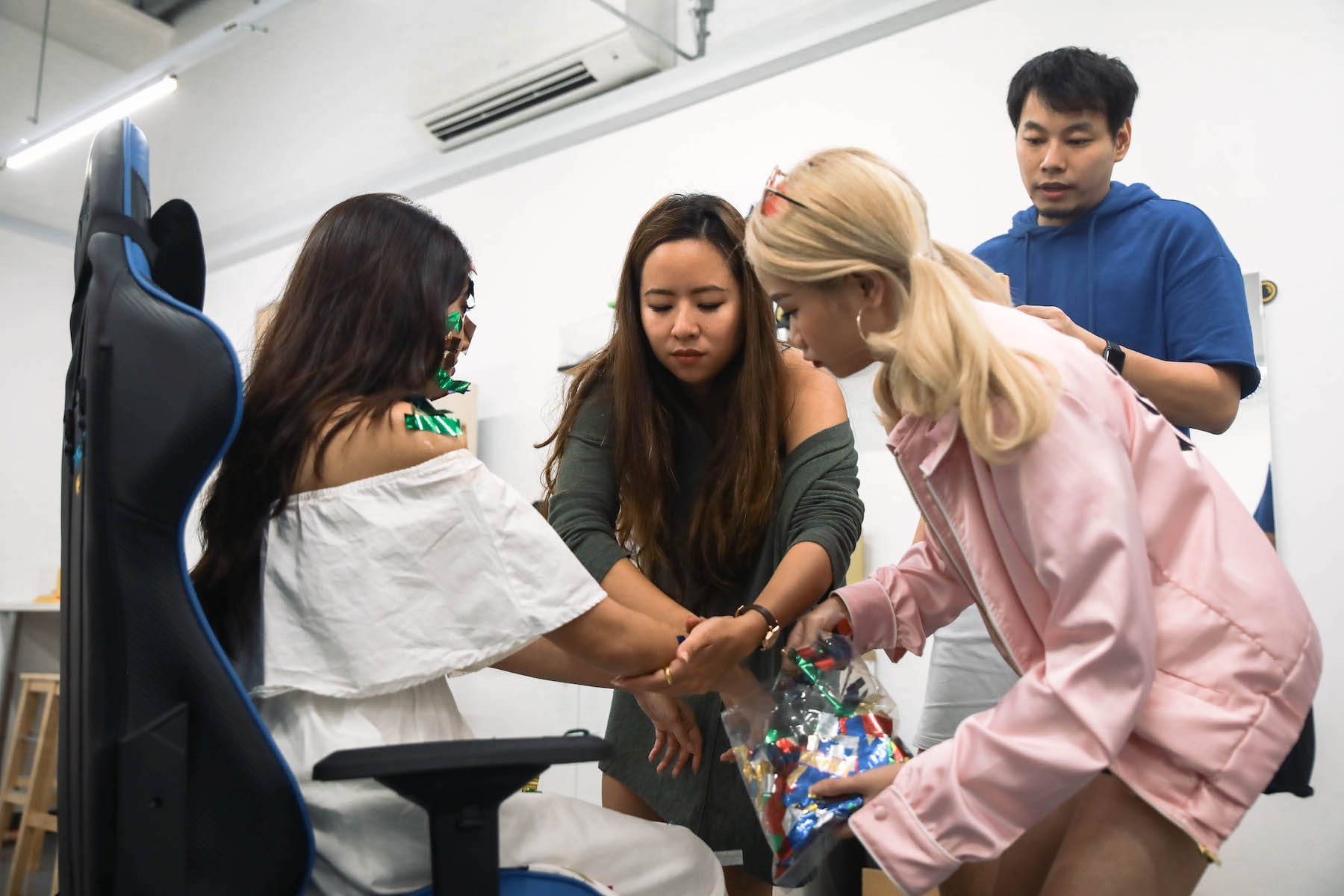 Getting hands-on, preparing the props and wardrobe for the shoot

That’s what her role is, she later told me, when she finally had time to sit down for a quick chat. She sometimes directs, sometimes act, constantly makes sure everything flows smoothly – that’s just on a shoot day, which is averagely once a week. 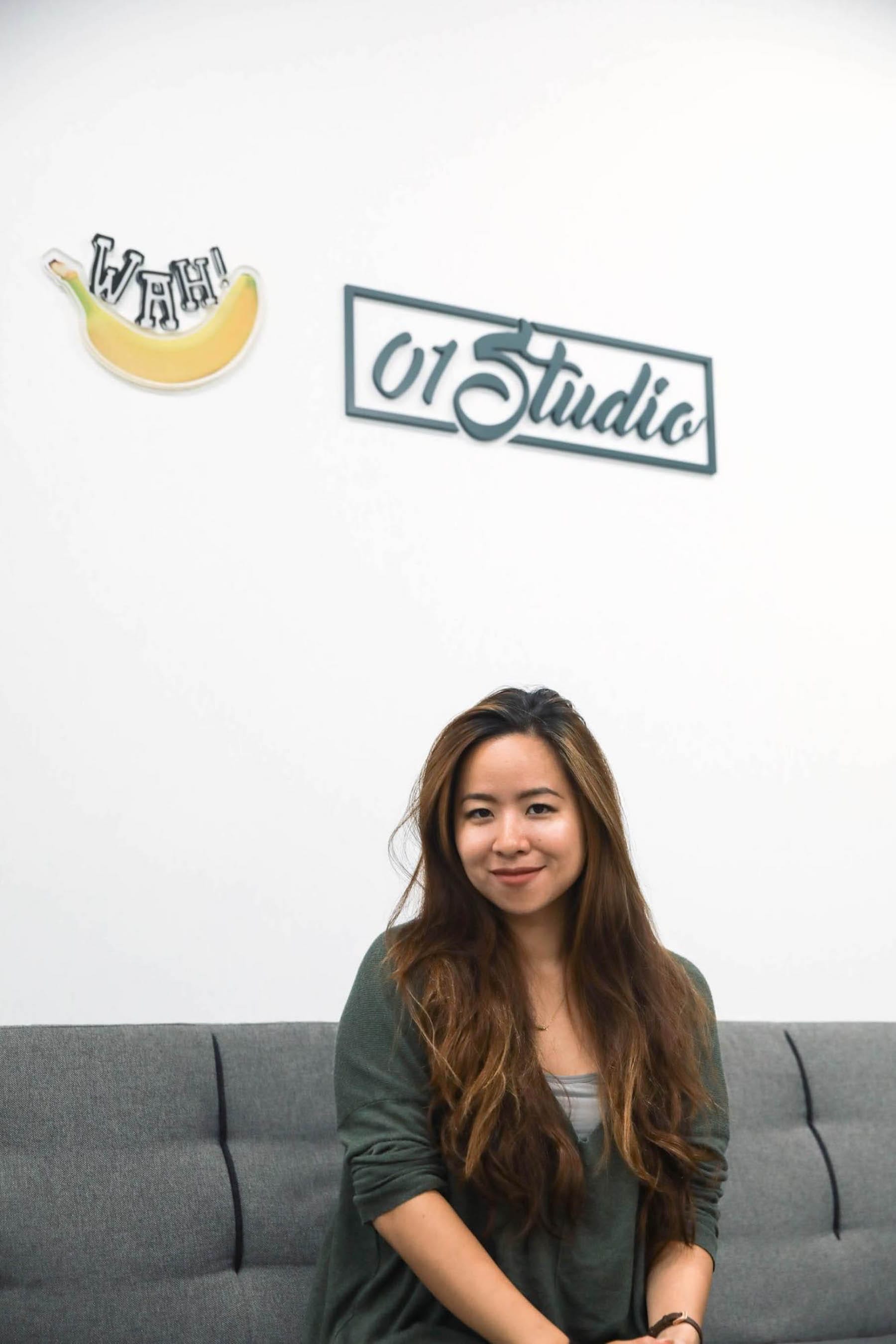 The rest of the days, she is looking for potential clients and meeting up with them, discussing future business plans, brainstorming on ideas for both client-based and organic videos, writing scripts, and handling emails and administrative accounting in between.
It’s tiring, yet I noticed that it didn’t stop her from joking playfully with the rest of the crew while being on top of things. 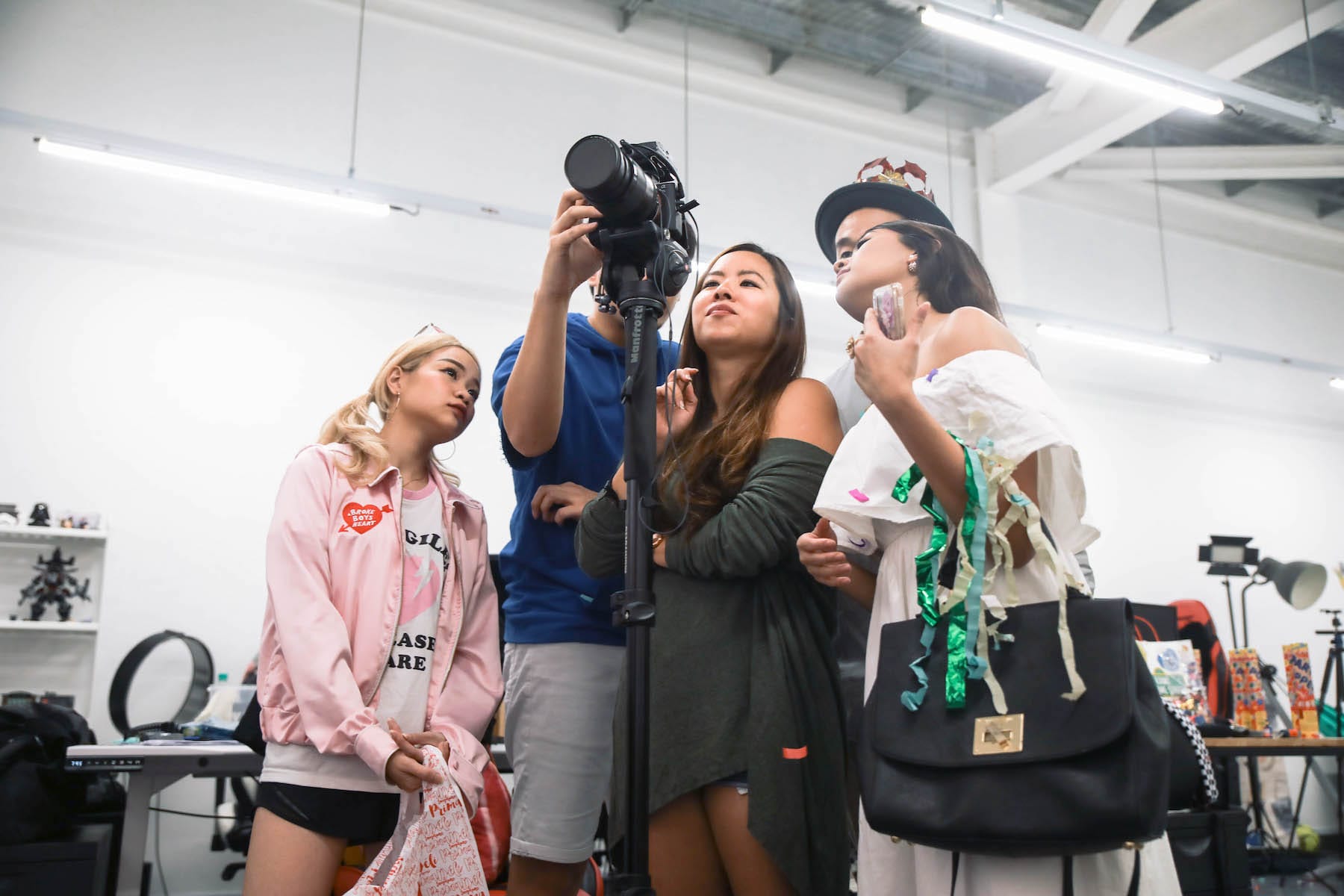 It is exactly this fun-loving yet focused attitude of hers that makes her the perfect leader of sorts, keeping everyone on track gently yet firmly, and commanding respect while respecting others.
Within an hour, the first scene of the day was done, and they sneaked in time to celebrate the crossing of the 1 million mark in subscribers. 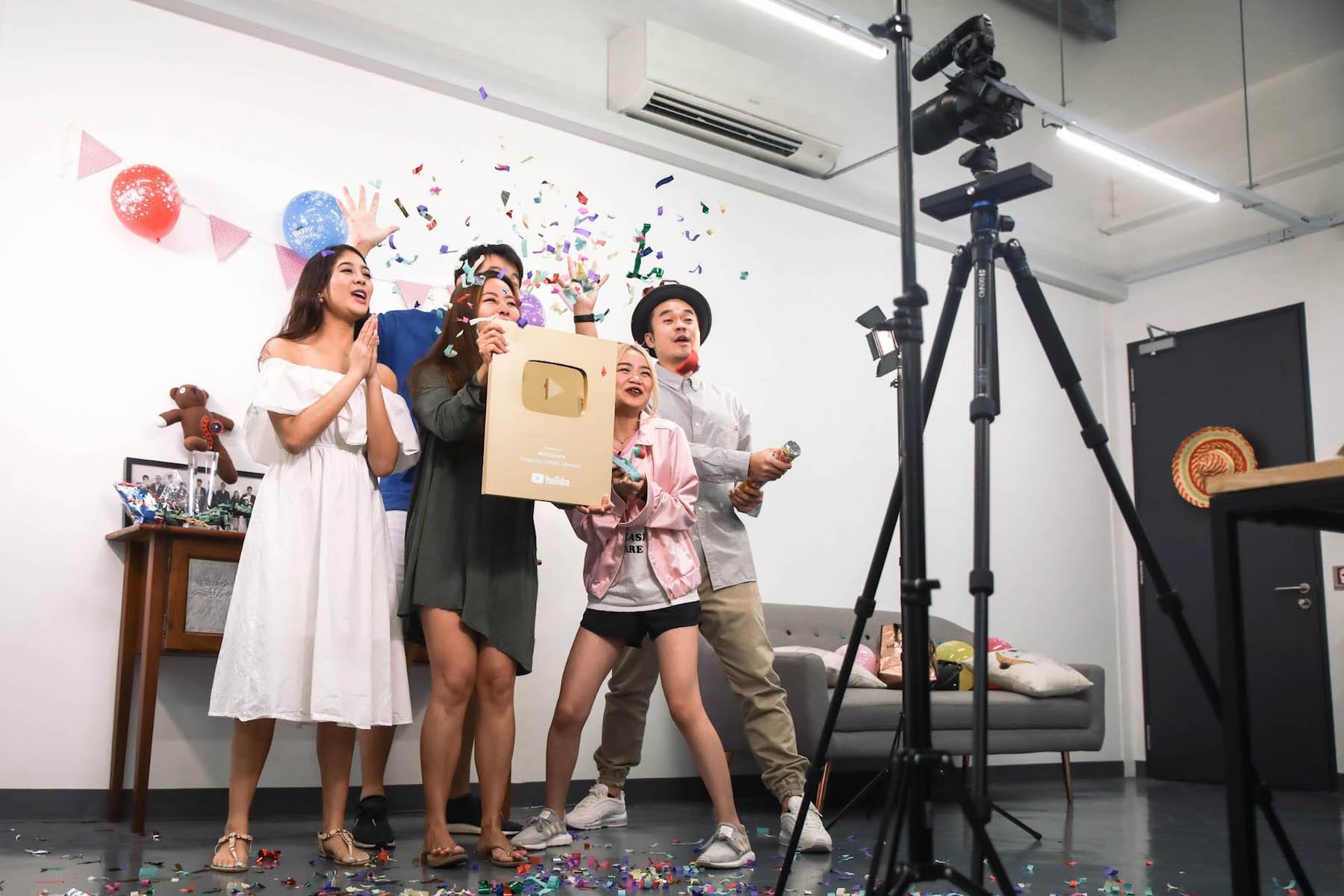 “Yesss! Finally!” she cackled mischievously, with a hint of emotional pride. It’s been a long journey, growing Wah!banana on YouTube while working on separate videos for 01 Studio Private Limited, the real brainchild of hers that specialises in digital content creation and social media marketing. 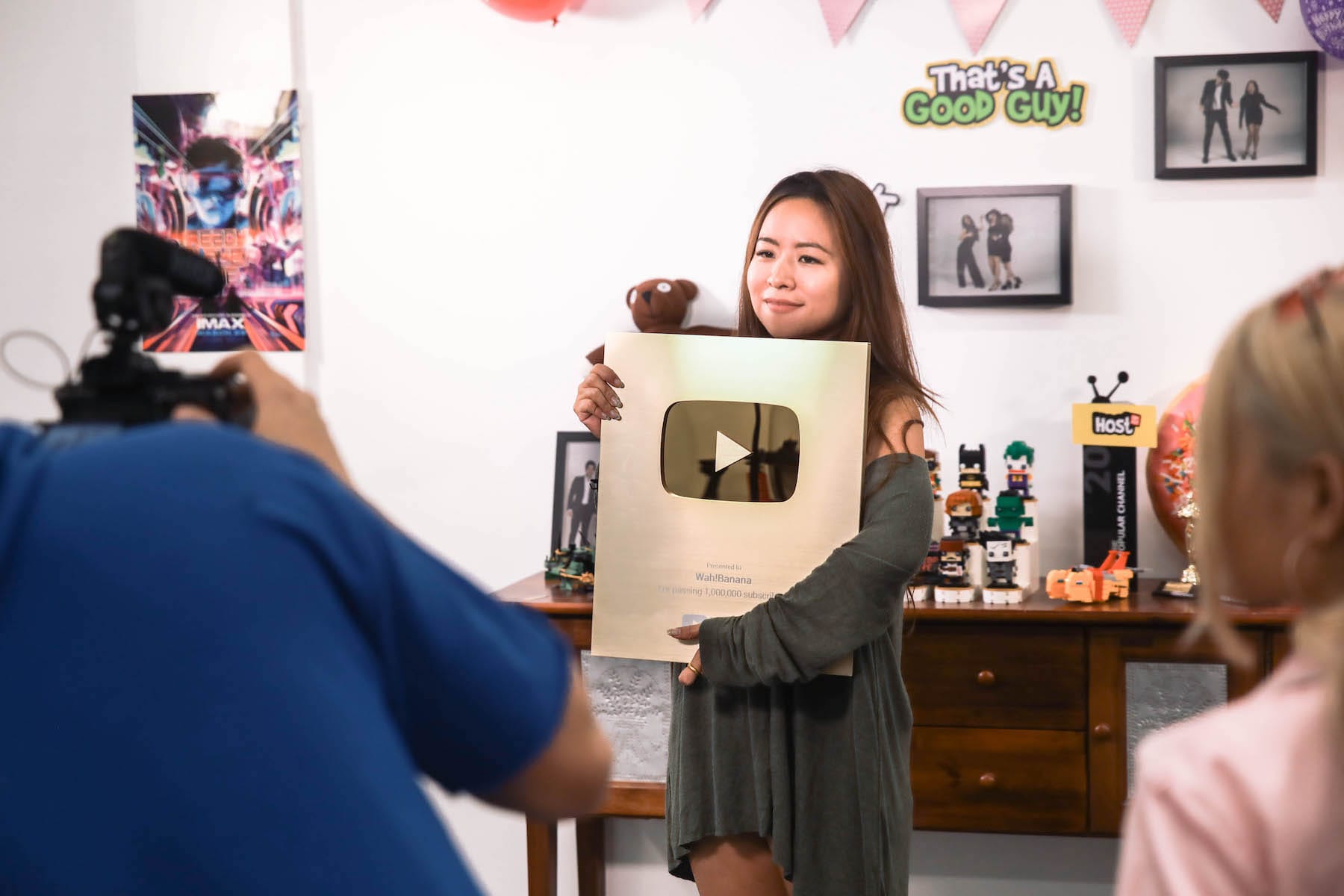 Yes, Wah!banana is just a trademark of 01 Studio Private Limited, and not all videos they produce are for their YouTube channel – some are outsourced by clients to be shown on their own platform instead, and some might be for their Instagram.
This is how she earns enough to pay her employees and fund the production of non-sponsored videos, she admits, because oftentimes, what may entertain Wah!banana’s fanbase might not sit well with clients, and vice versa.
In fact, I later found out that that day’s shoot was one such example – a series of short 30-second videos to be aired on their Instagram account! 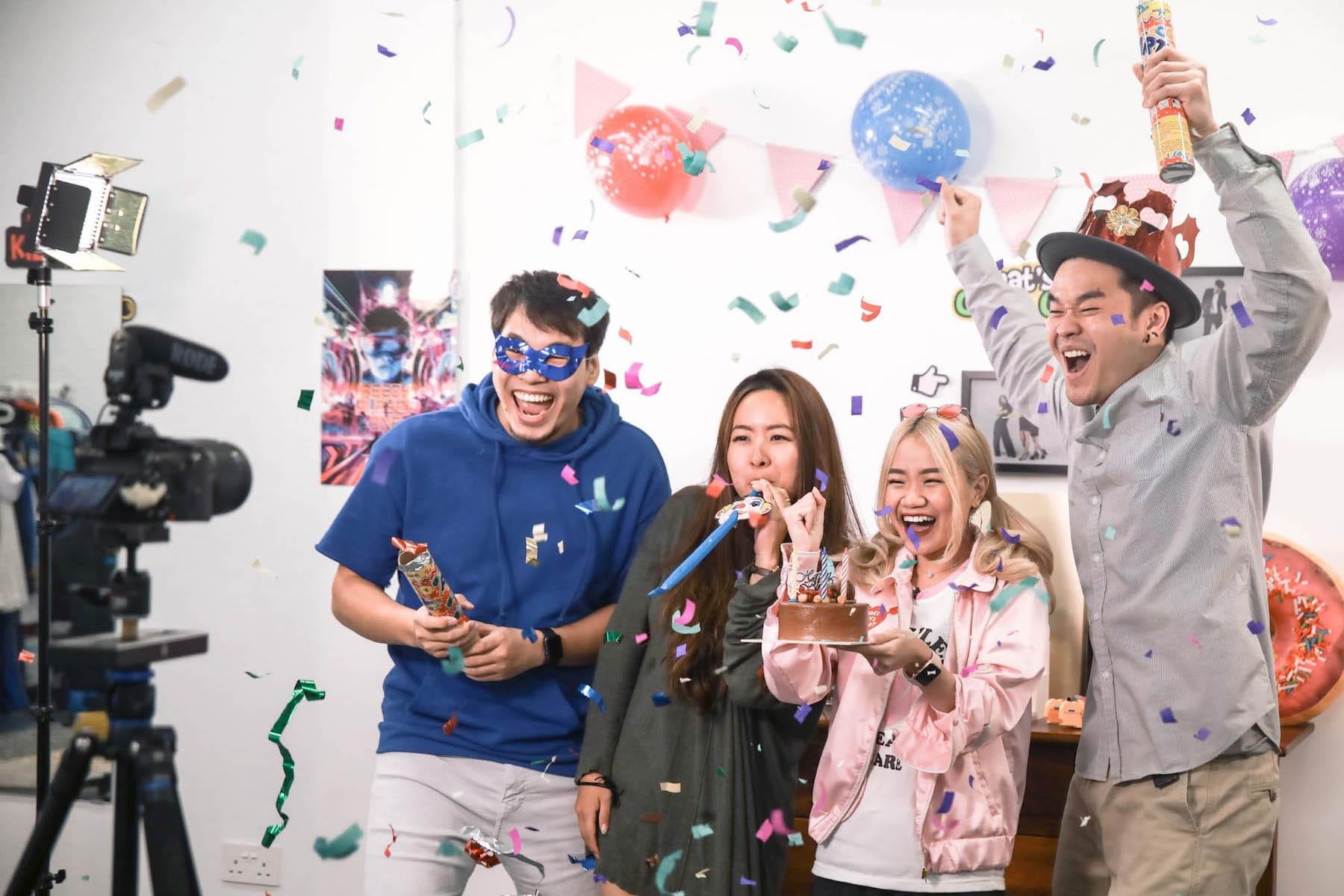 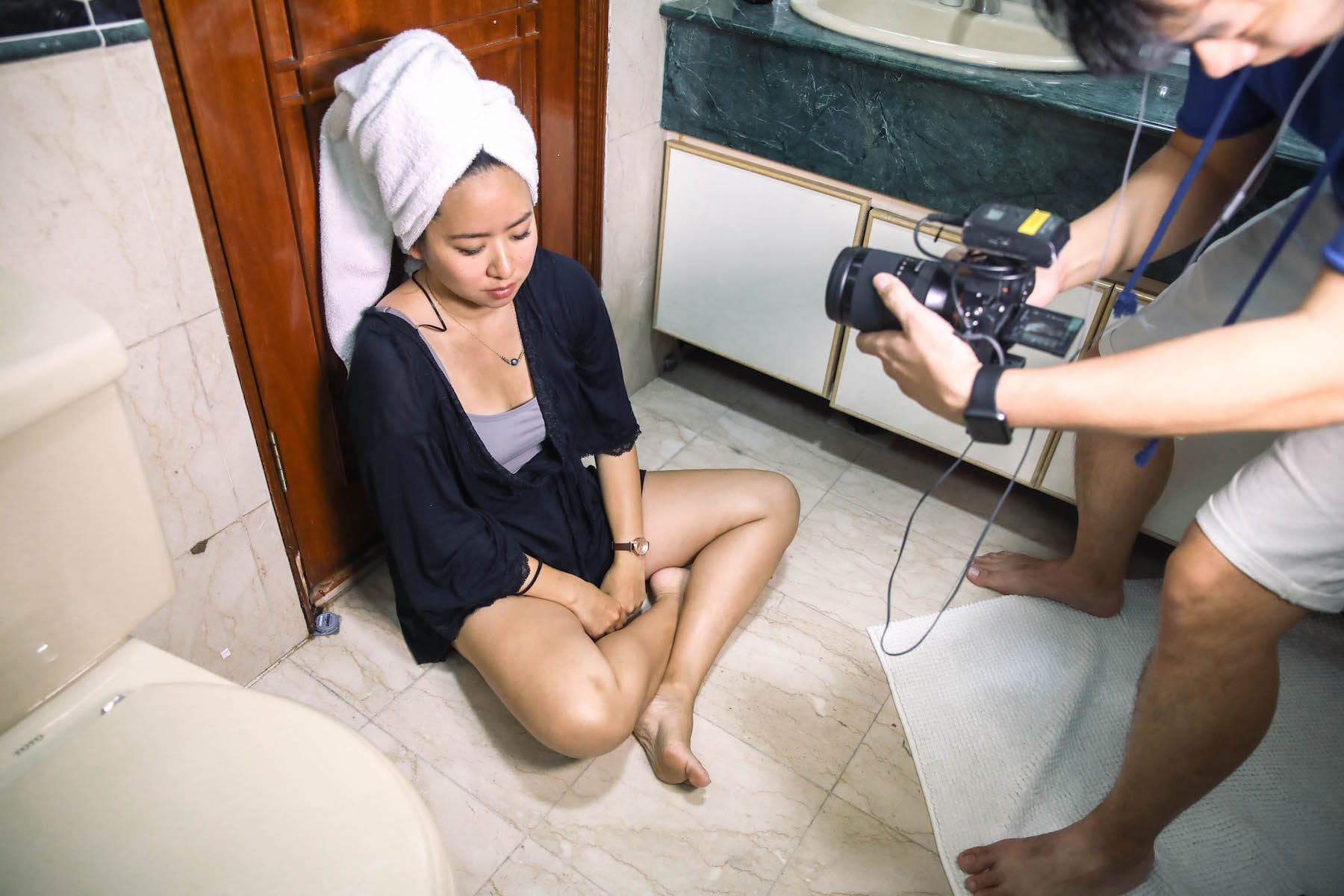 For the second filming of the day, Lingyi was seated on a bathroom floor in a bathrobe, hair messily wrapped up in a towel, and face scrunched up in mock despair. In other words, she was a joke, and far from looking classy.

But that’s exactly what she wanted, and what she loves to do as well – creating unique and interesting content that audiences will enjoy. Wah!banana is a platform where she can do just that, and she fondly agrees that this is her favourite part about having a career in YouTube.
“I can hardly see YouTube dissolving overnight, so it’s stable in that sense. Plus, YouTube’s algorithm is very friendly towards content creators, but you do worry that one day you’ll run out of ideas, or become out of touch with the latest trends.”

The strive to be the best

When we were back in the office for the final video, Lingyi takes her place behind the camera once more. 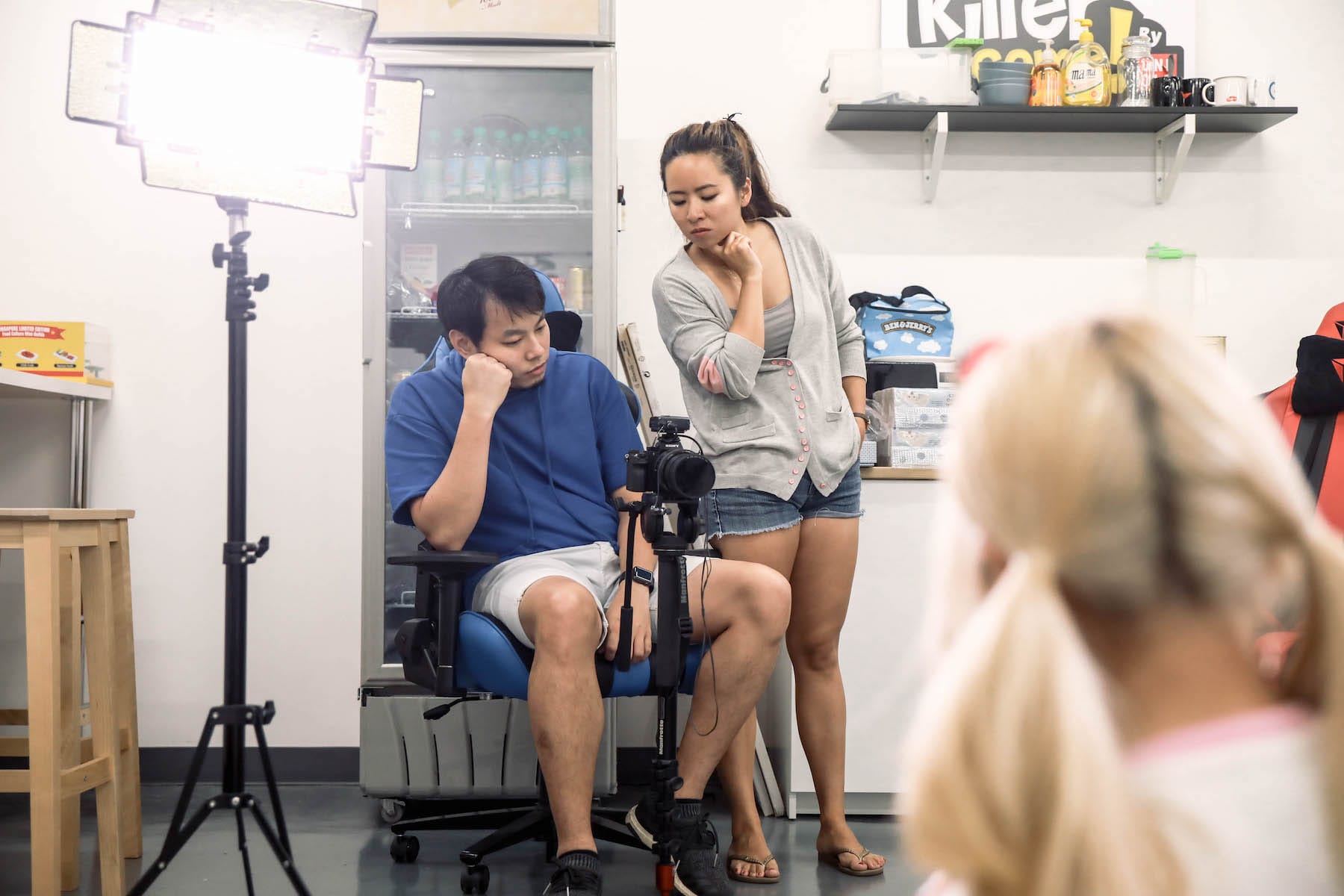 She’s full-on director mode now, and she mostly lets Chrysan do her thing, but offers some advice every now and then.
“Make your face uglier,” she instructs, “even uglier!”
“Try juggling your phone more-” 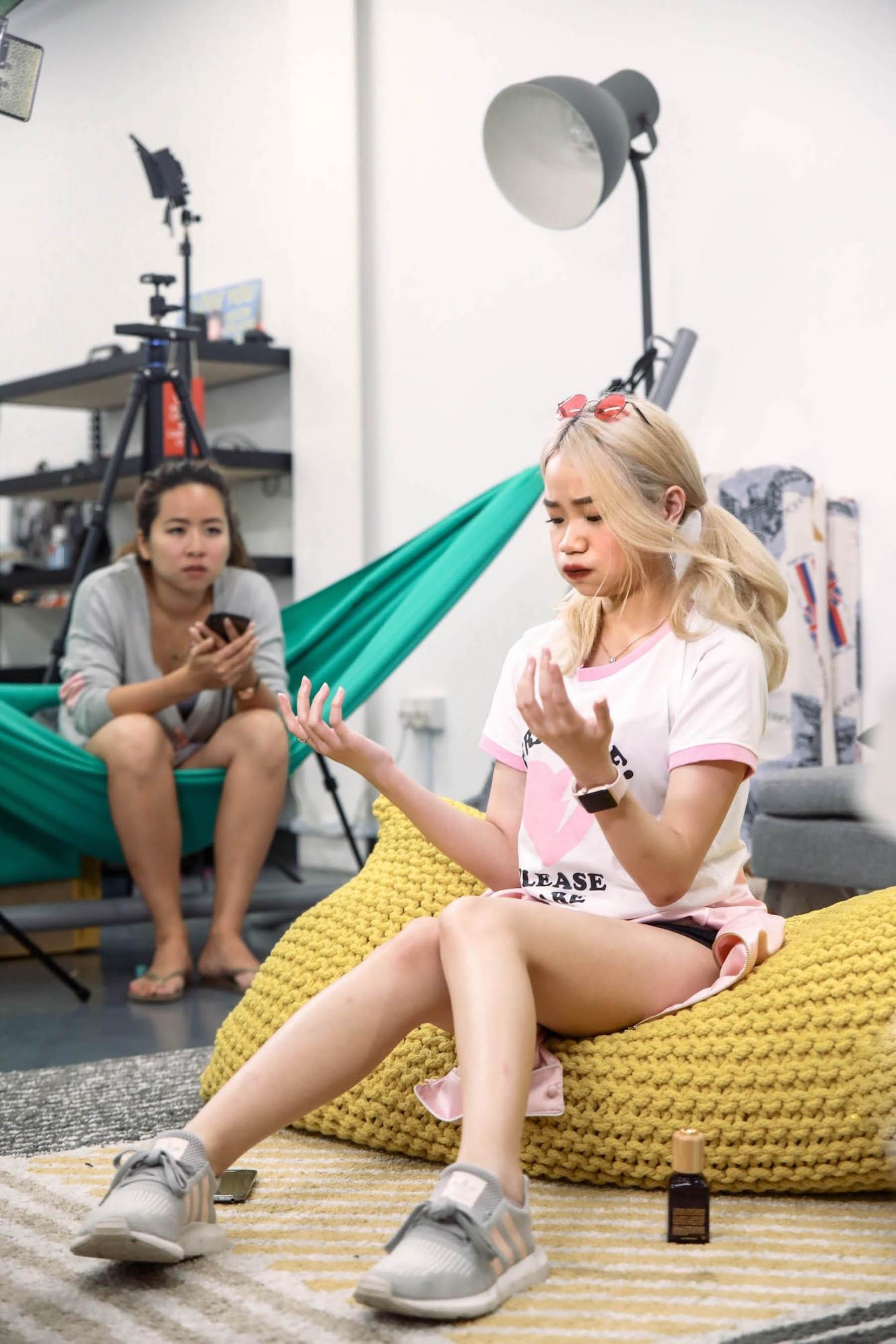 Her perfectionist side was shining through, and will shine once more when she went out to do a personal shoot of her own after they called it a wrap. 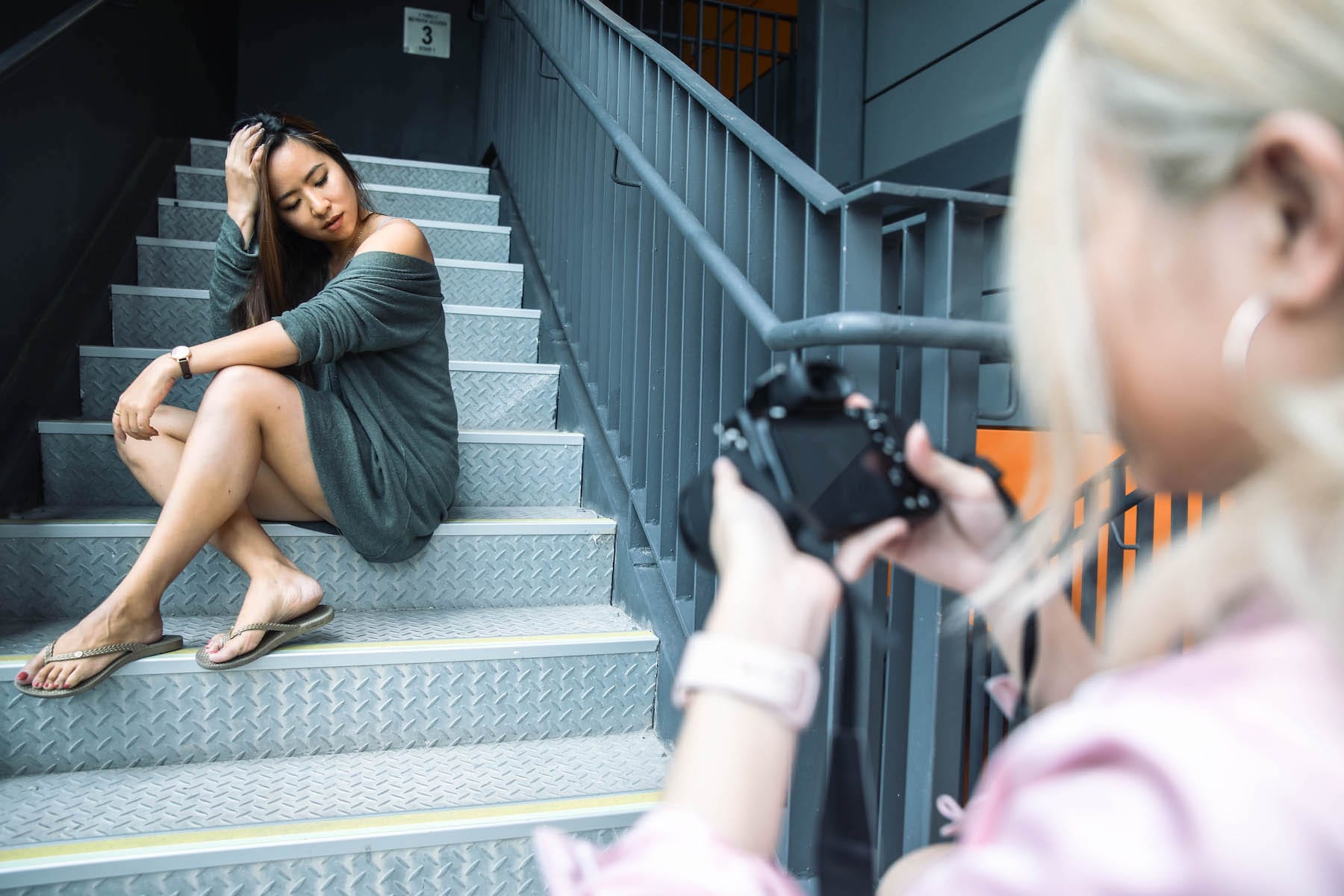 It was nice to watch how she stayed true to herself, trying out various poses to find one that she felt comfortable in, instead of opting for the usual rake-hand-through-hair pose because she “hates those fake shenanigans”. This translates to the type of videos that she’s been creating as well, with the help of the rest of the Wah!banana crew.
Viral videos are easy to create, she casually mused, if you count viral as trending in Singapore. I thought I heard her wrongly.
“There are certain topics and thumbnails that will help a video do well, but we’re trying to steer away from that now because the concept is no longer fresh.”
The idea for an average shoot, she lets on, requires at least one full day of brainstorming with the whole gang. It’s a lot of time and effort, but creativity and originality are what she prides herself on, and it hurts her when there are comments saying that their video is boring, or already done before by someone else.

Bet you didn’t know that only 40% of Wah!banana’s audience is local! The rest are from the US, UK, Australia, Hong Kong, the Philippines, and more. 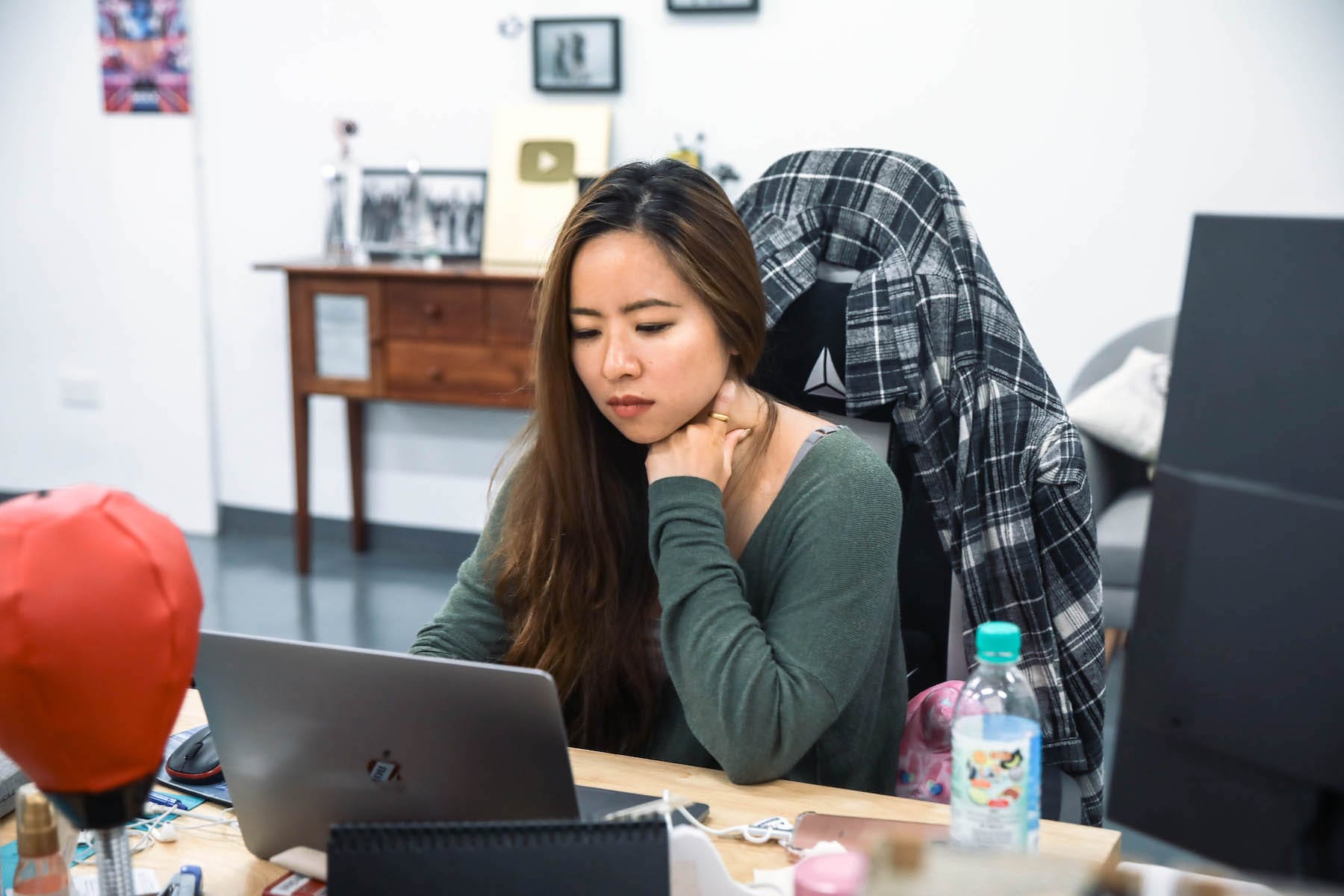 As we left Lingyi and the Wah!banana office, she was seated at her desk, replying emails and clearing her accounts to-do before the day ended. We asked for future plans for both herself and Wah!banana, and she gave us pleasantly surprising news.
Wah!banana will be experimenting with more content on their secondary channel, Wah!banana Too, and she intends to write more than just comedic scripts. Maybe sci-fi or horror, she teased, with an excited twinkle in her eye. 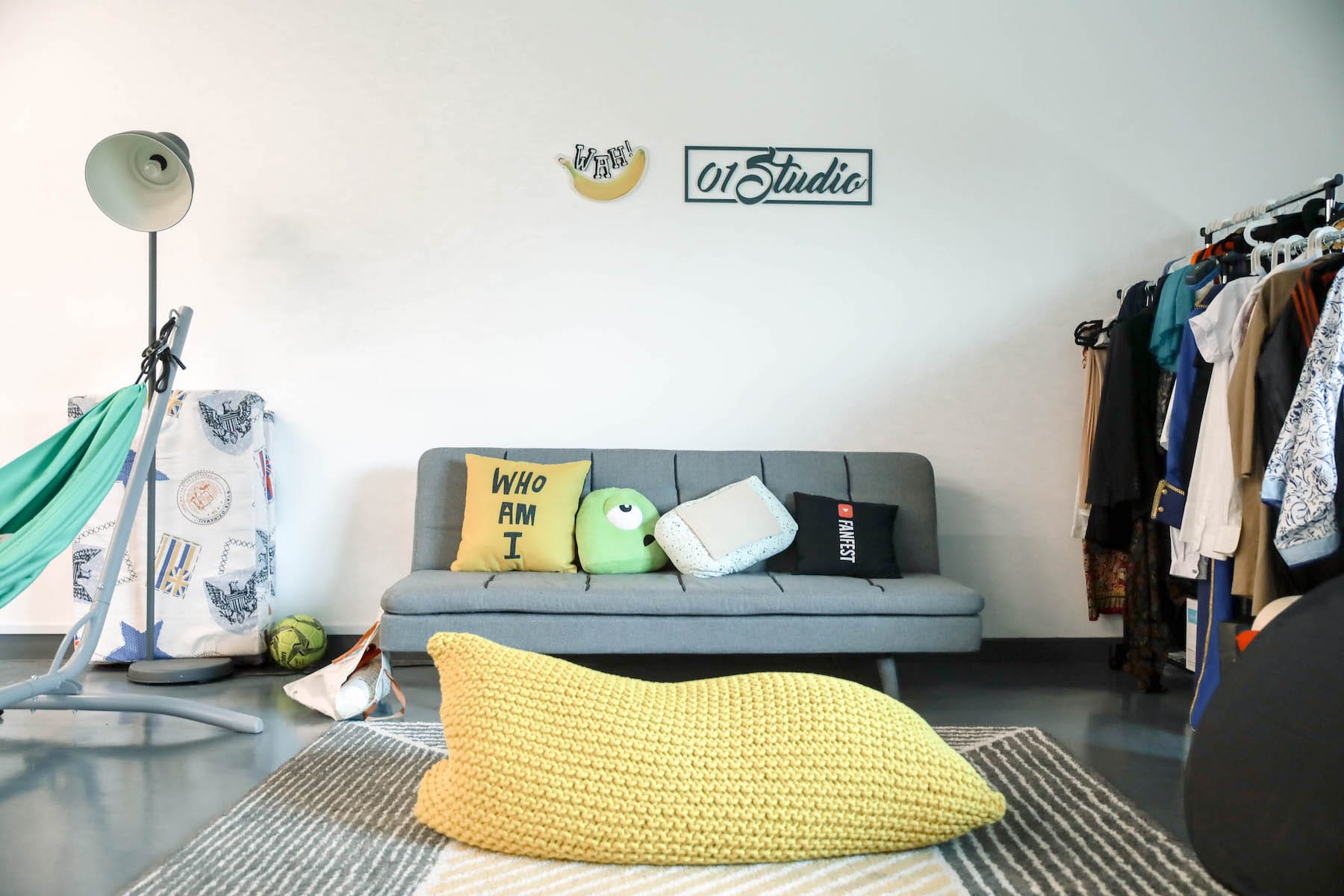 Then we said our goodbyes with a lingering thought that she had planted in us – many think that YouTube is a risky area to grow a career in, but it doesn’t matter because there will always be something to fall back on.
Shrugging her shoulders, she reasoned that to start a channel, you must possess certain skills like video editing, creative writing, or hosting. And if all goes south, these are skills that can easily be applied elsewhere. 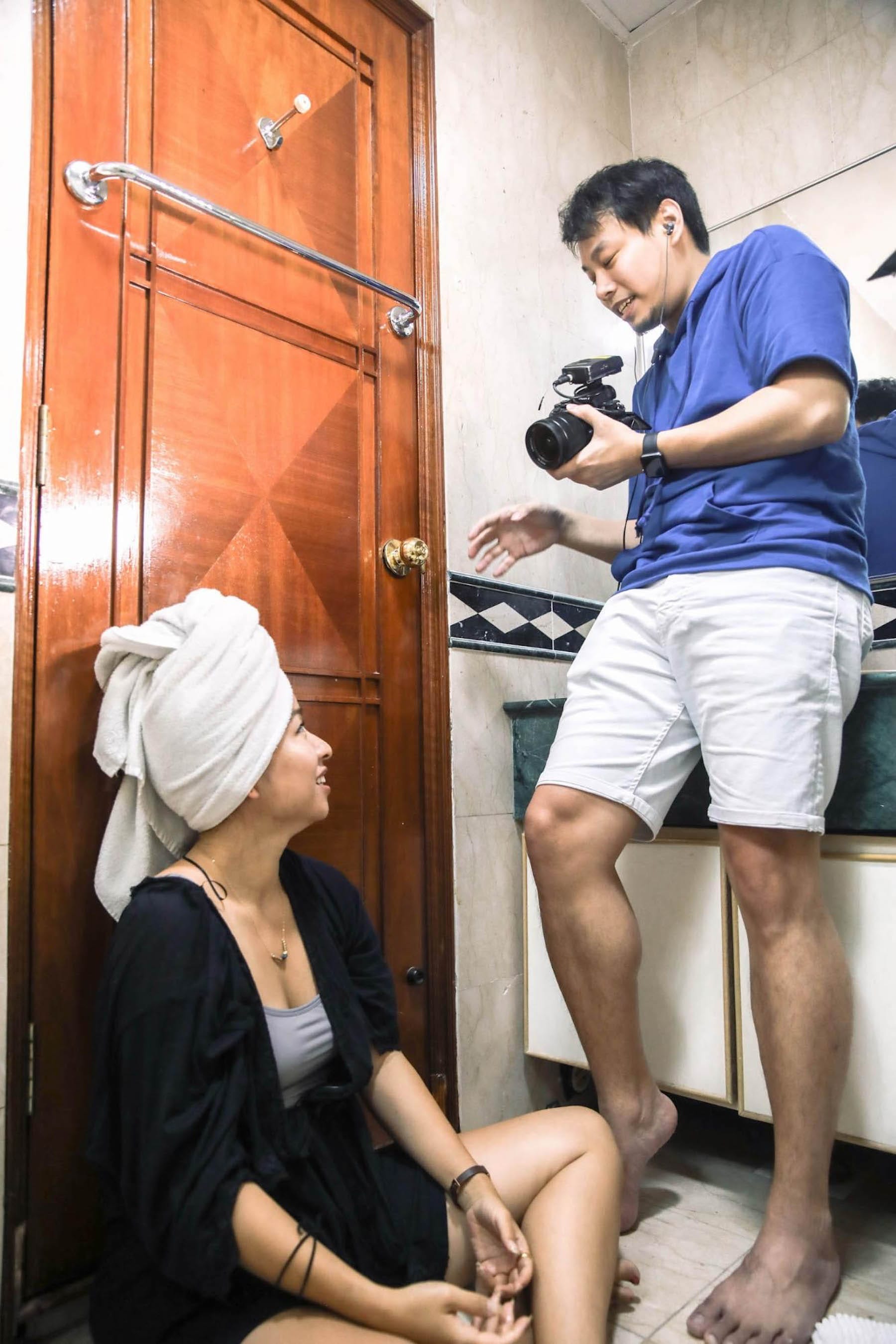 Jason and Lingyi, the co-founders of 01 Studio

A career in the YouTube industryA day in the lifeA day in the life of famous peopleHow to make viral videos in Singapore on YouTubeLife as a youtuberLingyi from Wah!bananaWah!Banana