Salt Bae might be infamous right now after his recent antics at the FIFA World Cup, but his iconic look and style won’t be easily forgotten, as we’ve recently spotted someone in JB that looks just like him—and thankfully, he’s definitely not cancelled.

JB’s very own Salt Bae doppelganger goes by the name Mendro, and instead of sprinkling salt down his arm, he sprinkles a different kind of herb: coriander! Mendro currently operates a Japanese-style izakaya and bubble tea shop called Chadohatsu where he sells a super unique (read: controversial) drink: Coriander Lemon Tea!

He’s also having a stall at JB’s Chill Day Night Market pop-up located at Mount Austin Outdoor Carpark. If you’re lucky, you might even catch him manning the stall himself and you can watch the action up close as he hand pounds lemons into juice before mixing the freshly-pounded juice with Dan Cong oolong tea and actual stalks of coriander leaves—all while dressed in his signature black singlet, sunnies and slicked back hair for extra pizzazz and and theatrical effect!

The unique coriander-laced drink might not be for everyone, but if you’re down to try it you can head to Chadohatsu’s stall at the Chill Day Night Market from now till 19th January 2023! Just look out for the stall sporting a cartoonised version of Mendro himself! 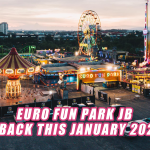 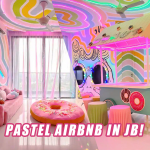