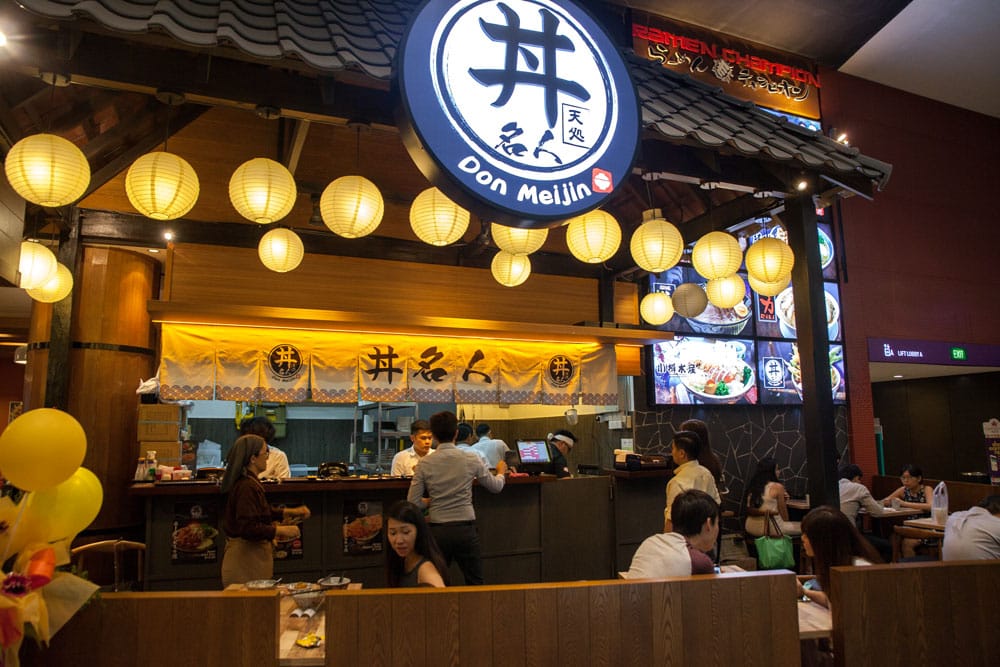 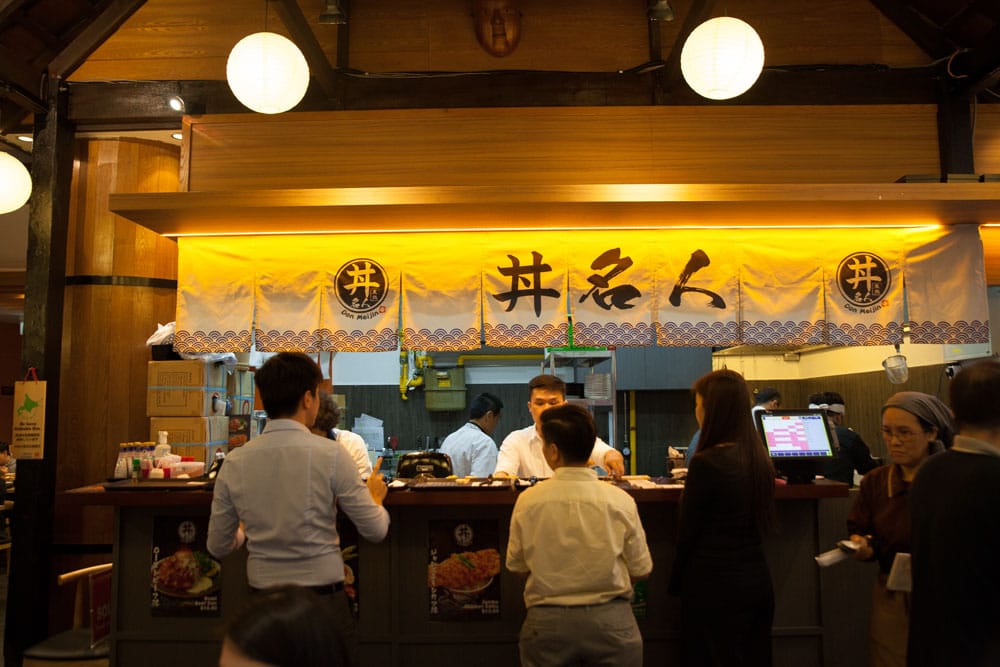 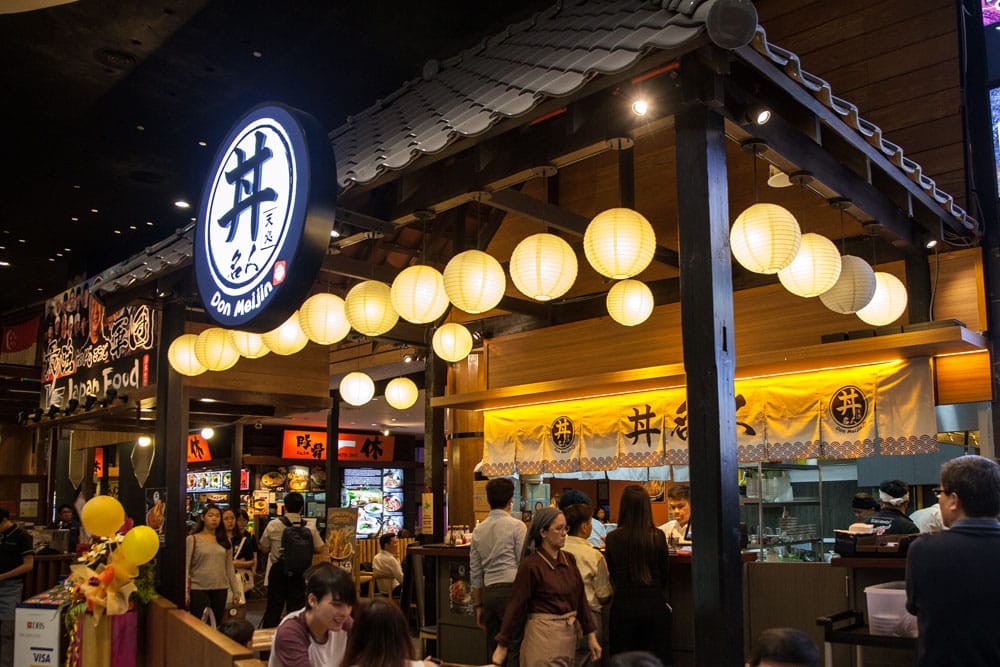 If you’re a serious ramen buff, you would probably be familiar with Ramen Champion. An open-concept dining space home to multiple Japanese food stores, what was initially a platform for different ramen owners to compete against one another has evolved into a one-stop shop for Japanese cuisine.
Don Meijin, one of the newest additions to the outlet, is a store specialising in donburi, the humble Japanese rice bowl often overlooked in a country where only ramen eateries and sushi restaurants are awarded Michelin stars. However, we can’t deny that the variation that arises from a simple bed of rice perfectly exemplifies the creativity of Japanese cuisine.
Offering over ten different types of donburi, Don Meijin is definitely doing their best to ensure that everyone has a don to their liking. This week, we were given the opportunity to try some of the highlights from their menu, with the Spicy Chilli Crab Tendon generating much anticipation.
Signature Tendon $13.80 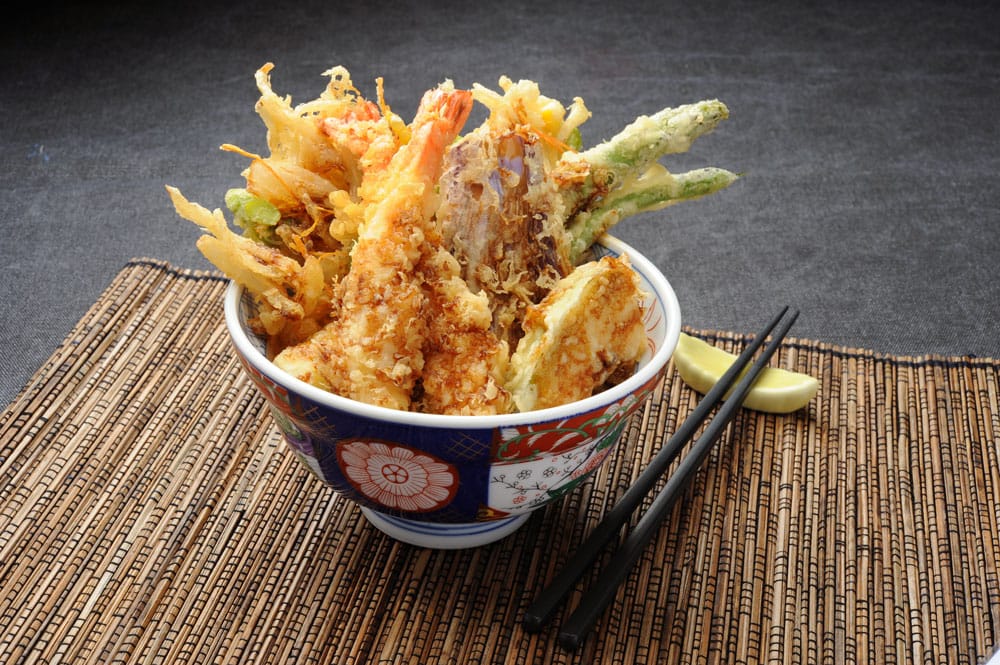 Don Meijin’s Signature Tendon is a definite must-order if you intend on visiting. As with most bowls of tendon, the Signature Tendon features lightly battered and deep fried vegetables and seafood, inclusive of two black tiger prawns, asparagus, pumpkin, seasonal fish fillet, eggplant, and kakiage. It can get a bit messy having to deal with that many pieces of tempura, so the decorative plate lodged into the rice does come in handy when you begin digging in.
I would have preferred it if the tempura had a bit more crispiness, but the sweetness of the prawns and vegetable fritters were sufficient to tide me over. The don is drizzled with Japanese soy sauce as well, but the rice still felt a bit too plain, its taste divorced from the flavorfulness of the tempura. However, a small bottle of the sauce used is placed on every table, so if you need to kick up the flavour by a notch, feel free to throw in more splashes of soy sauce. 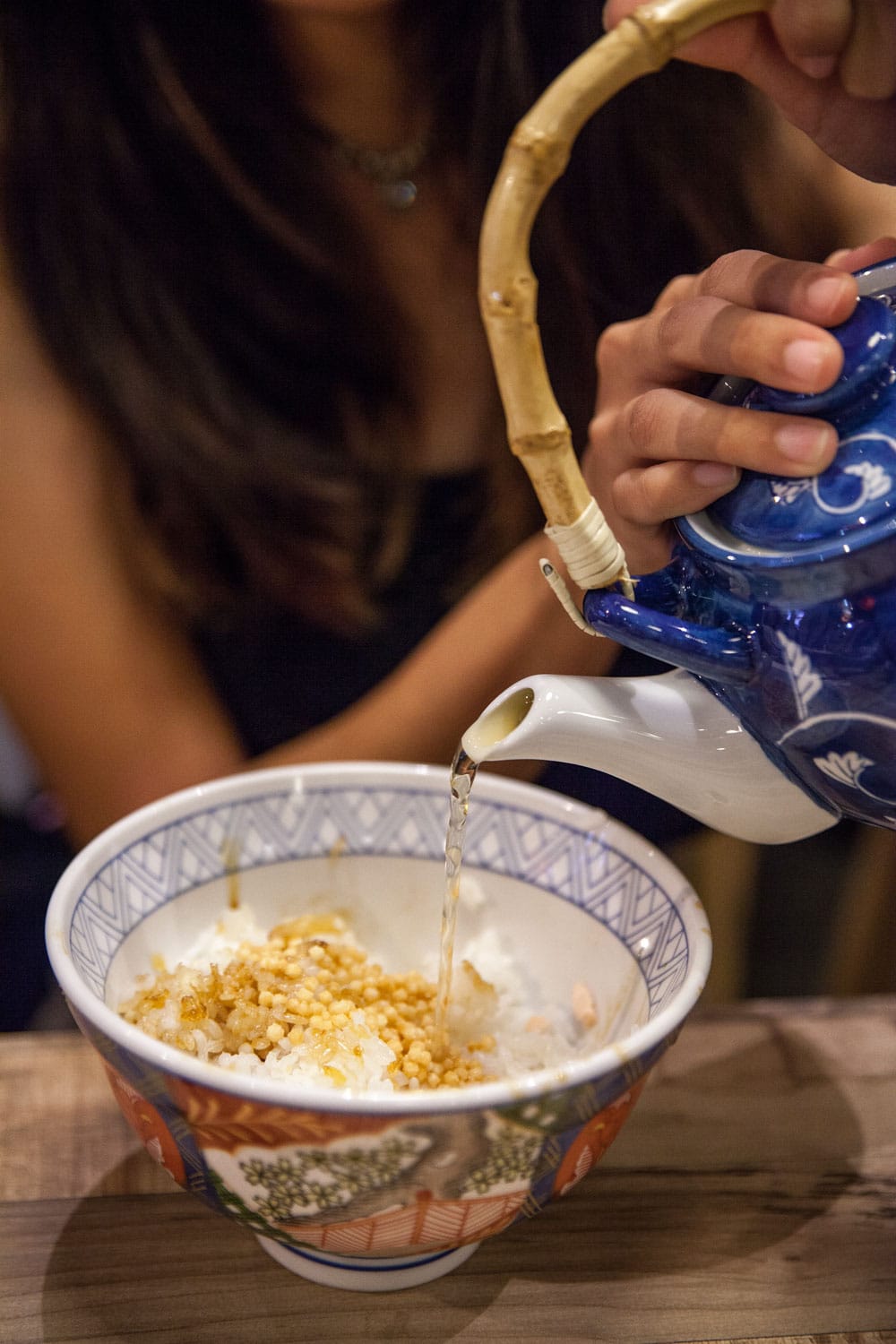 The Ochazuke Set ($2) is an add-on from the menu that is almost a staple for this dish – and trust me, you do not want to go without it. When you’re about done with the tempura and have quite a bit of rice to go, add in a sprinkling of rice crisps – or even a mound of wasabi if you’re up for it – and pour in an ample amount of hot dashi soup over the remaining rice. The result is a soothing bowl of rice steeped in warm broth, the perfect comfort food on a rainy day. As someone with the long-drawn habit of adding spoonfuls of soup into my rice until it’s a nice, watery consistency, this concoction was right down my alley.
Spicy Chilli Crab Tendon $14.80 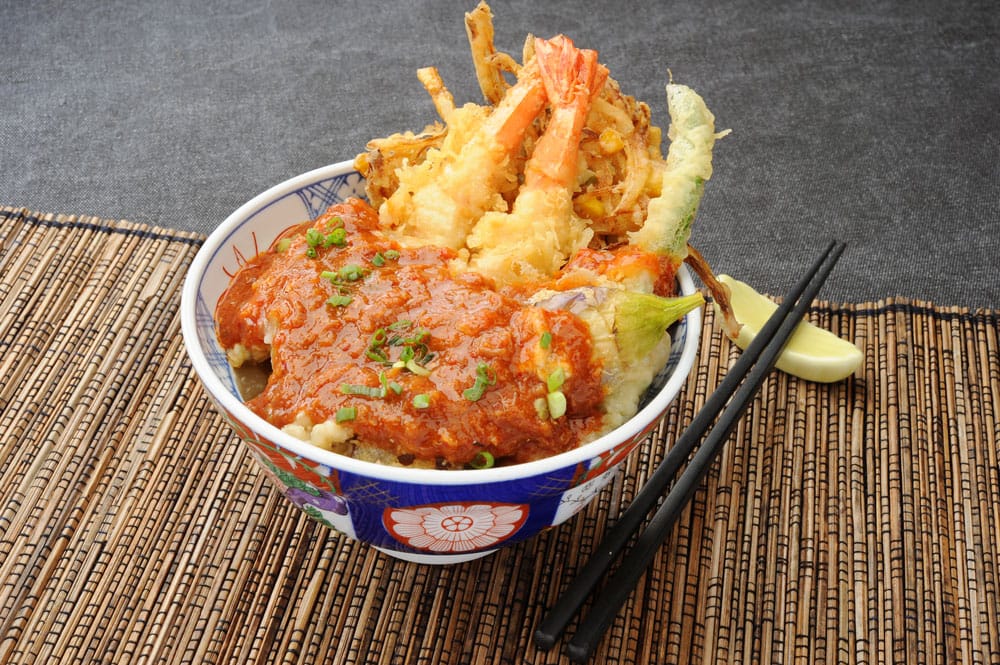 With the popularity of salted egg yolk never seeming to fade, it’s almost valiant when a restaurants decides not to drizzle the golden ambrosia over their dish at an attempt at a local twist. Indeed, Don Meijin has decided to brave the road less travelled, choosing to lay a blanket of spicy chilli crab sauce over their tendon instead.
The spicy chilli crab sauce in no way tasted like an afterthought – as I would have expected considering that this dish is an upgrade from the first simply with the topping. The chef was generous with the chunks of snow crab in the sauce, lending it dimension and texture. The black tiger prawns tasted even more marvellous doused in the sauce, because honestly, you can never really get enough of shellfish.
The sauce is apparently boiled with Japanese soy sauce and mirin to acquire a distinctive flavour, but the strong chilli flavour must have masked any of that because boy, did it pack a punch. As a benchmark, I have an average spicy food tolerance – I can handle foods a little spicier than a McSpicy – and this chilli crab sauce bordered on being almost too spicy for me. If you’d like to be able to adjust the level of spiciness in your tendon, I’d suggest requesting to have the spicy chilli crab sauce on the side instead.
Pork Shogayaki Don $12.80 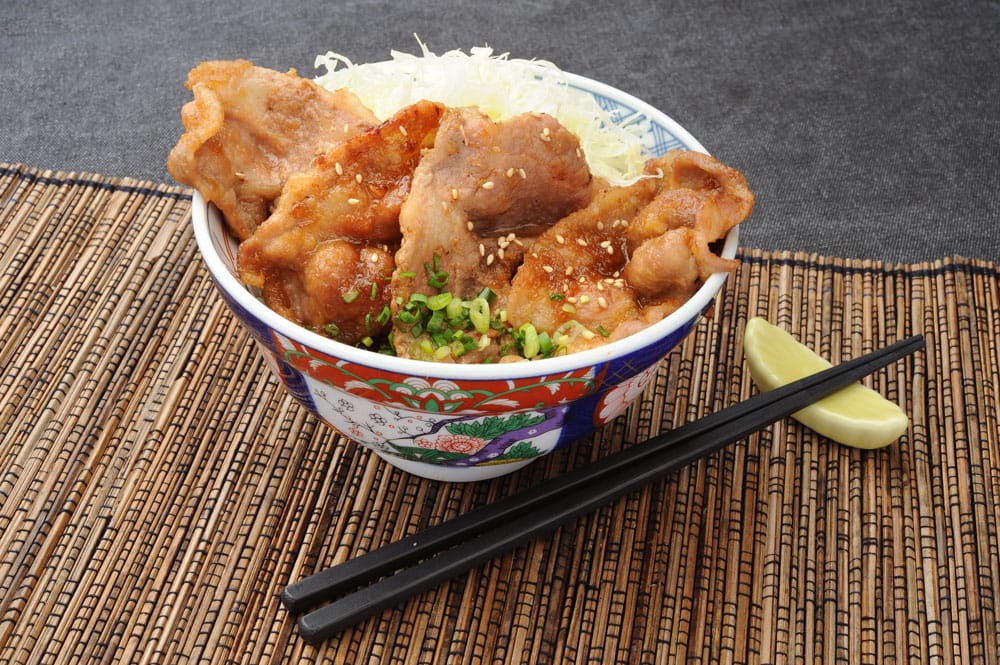 If you’re not a huge fan of the sweetness of teriyaki sauce, then this donburi is perfect for you. Flavoured with shoga (spicy ginger), soy sauce, sesame seeds, and a touch of mirin, shogayaki is perhaps the second most popular Japanese pork dish after tonkatsu – and for good reason. A lunchtime staple in many Japanese homes, the Pork Shogayaki Don is a humble dish that offers a taste of simplicity.
This might be the lightest dish on the menu. Shredded cabbage is served alongside the pork, giving the don a slightly crispy texture when mixed into the rice and sauce. While tasty, this dish was undeservingly overshadowed by its counterparts, which had much more going on.
Mille Feuille Katsu Don $12.80 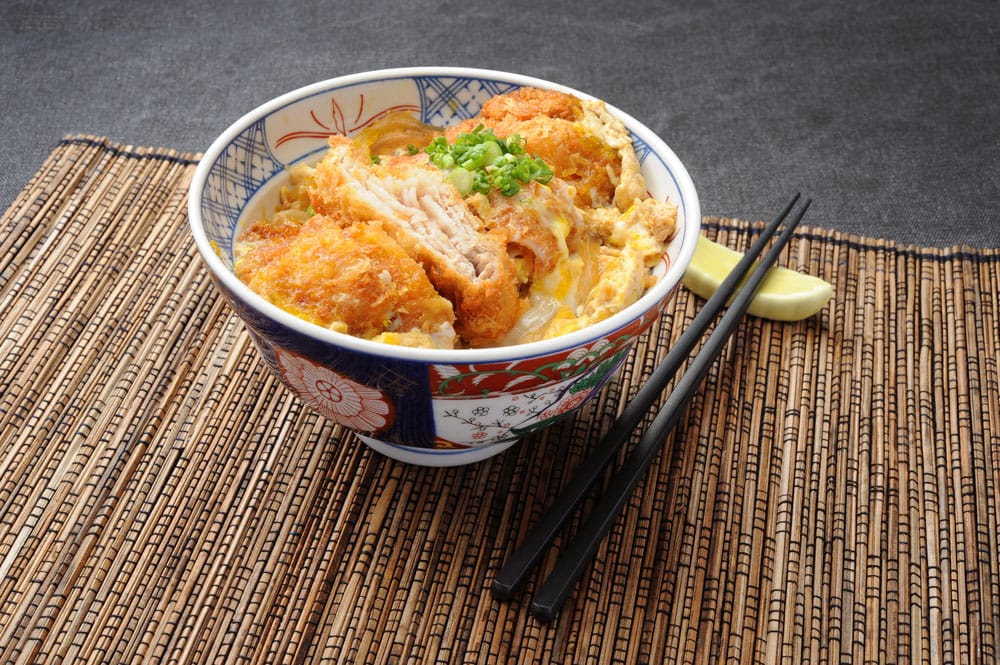 Don Meijin’s offer of the Mille Feuille Katsu Don is a different take on the familiar, and well-loved, katsudon. Think French multi-layered puff pastry and cream dessert, but with meat and fat instead. If you have yet to have your own taste of mille-feuille tonkatsu, Don Meijin would be a decent place for you to start – and you’d better be seated for this.
One bite into this breaded slab of meat, and you’d be clenching your fists in an effort not to turn slack in your seat. Savour the juices as they ooze out between the 14 layers of thinly sliced, marinated rosu (pork loin), and enjoy the complementing textures of crispiness, fattiness, and butteriness. The alternating tiers of succulent pinkish-white meat and creamy fat, encased in delicately crunchy panko, stole the show in this dish.
Of course, we can’t forget about the staple eggs that enshroud the rice of every katsudon. The blend of the katsu‘s tenderness and the eggs’ softness was unmatched. It was less an explosion of flavour and more a comforting, melt-in-your-mouth sensation.
Overall, the Mille Feuille Katsu Don was a delightful dish. A refreshing, and juicy, break from the multiple servings of tempura.
Address:
201 Victoria Street, Bugis+ #04-10, Singapore 188607
Opening hours:
Mon – Fri: 1100 – 2230
Sat, Sun, PH: 1030 – 2230
Contact: +65 6238 1011
Website: www.ramenchampion.com.sg
Facebook
Instagram