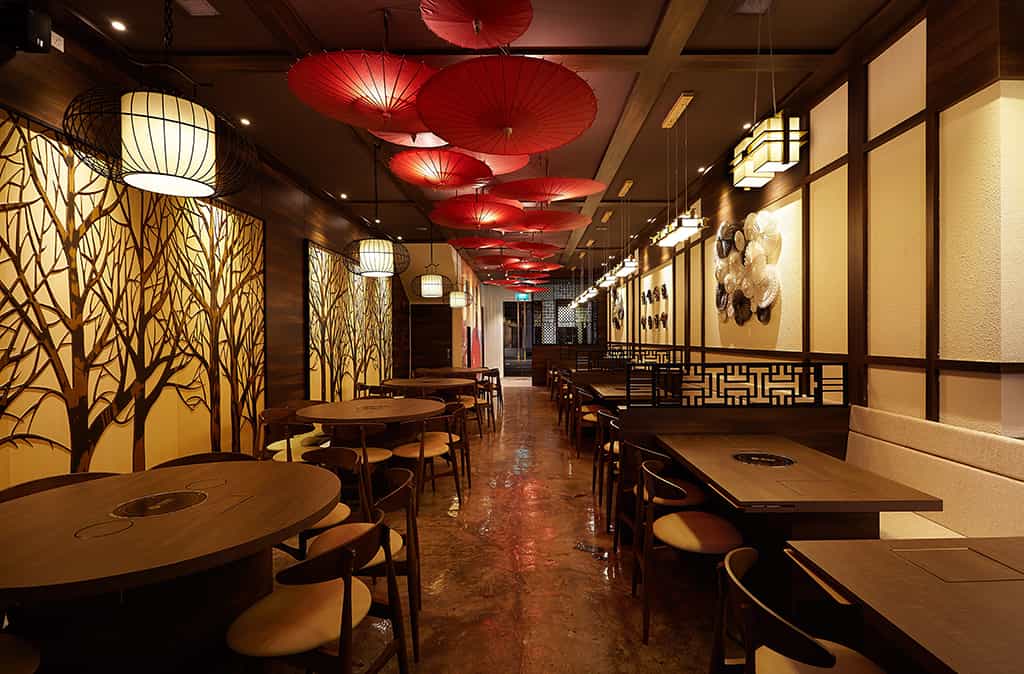 Steam-potting — the term used to describe the stacking of multiple steamers — is the latest emerging trend in Korea. But unlike their Hong Kong counterparts which feature a pot of porridge at the very bottom, the Korean version at K-Tower uses soup instead.
Much like the conventional steamboat, the blend of juices from the seafood is what brings the flavour of the soup up several notches. But instead of steeping the shellfish in the soup itself, the tower of steamers allows the juices secreted to trickle down, all the way into the soup, amalgamating into a delectable, steaming pot of broth. 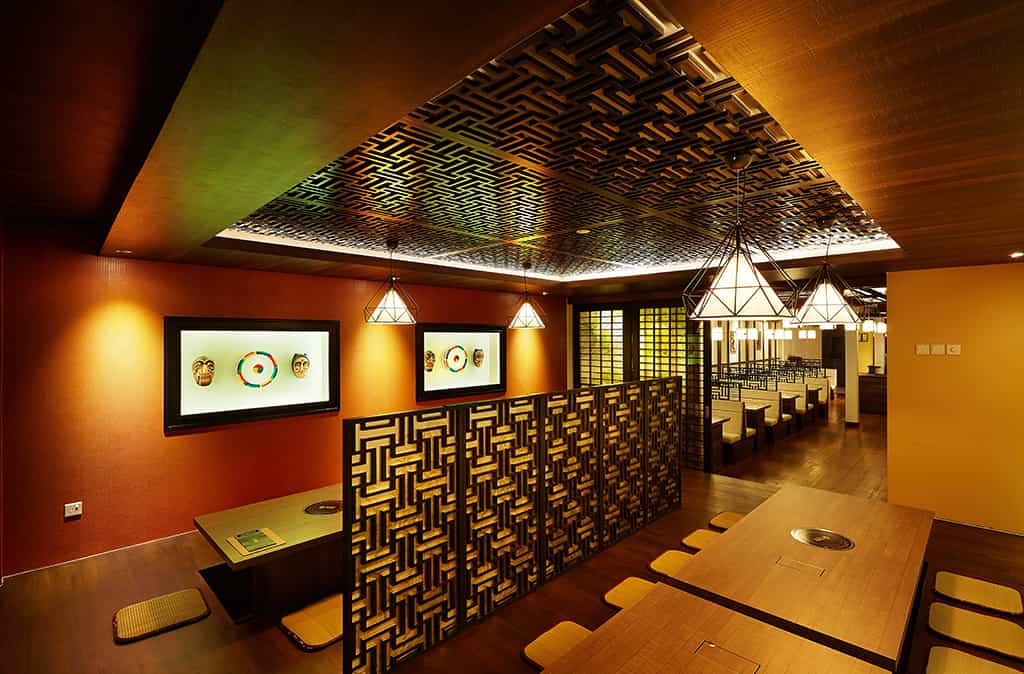 With two dining levels and an alfresco that is a work-in-progress, seating is of abundance in this restaurant. The second level is home to a spacious VIP room featuring unique tatami seating as well, the most ideal pick for that big company dinner you’ve been fretting about all week.
Seated comfortably at a round table wide enough to fit nine, we were delighted to have been given the opportunity to try out their massive 9-tier seafood tower, among other Korean classics as well.
Seafood Pancake ($14.90) 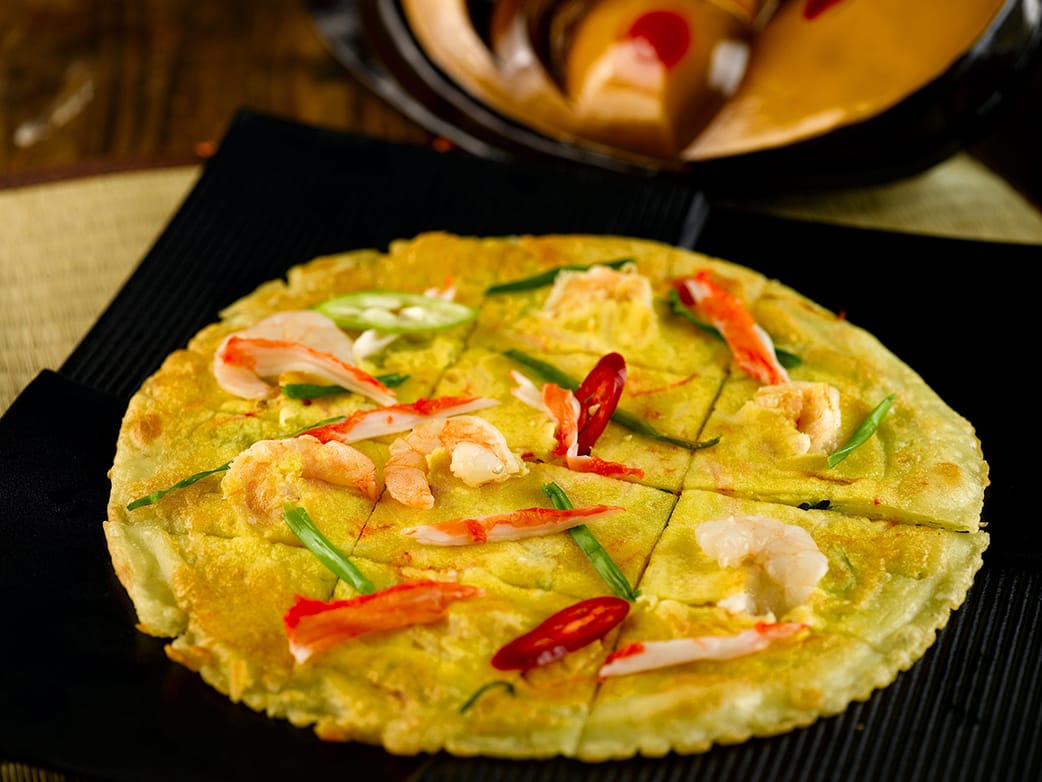 Korean pancakes are one of the must-have appetisers in any Korean meal. Unfortunately, we’d often get floppy and doughy pancakes that leave much to be desired. It is with great joy that we assure that you’d get none of that in K-Tower.
K-Tower’s seafood pancake has perfected the delicate balance between crispy and fluffy — bite through the crunchy exterior, and savour the softness within. Though a carbohydrate like this would take up stomach space set aside for the seafood, it is well worth-it.
K-Tower Fried Chicken Wings ($7.90) 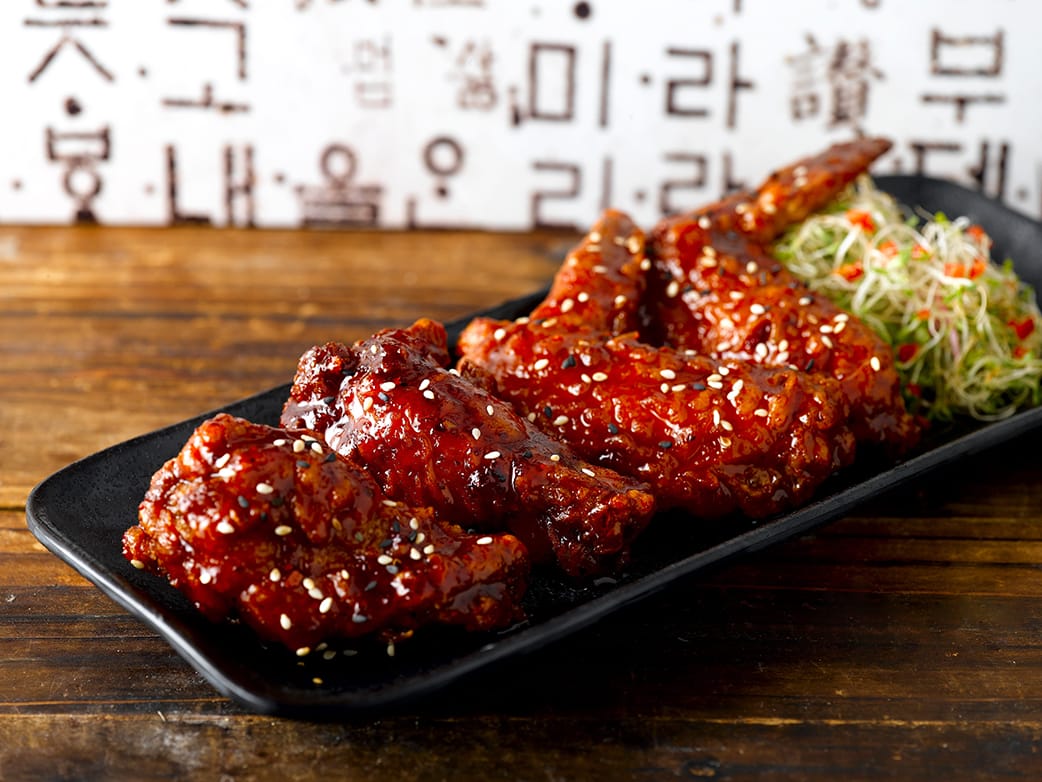 What’s a Korean restaurant without classic Korean fried chicken? The addictive crunch of the glazed skin, paired with its scrumptious spice, will enable you to polish off a wing at record time.
The layer of gluey sauce was extremely sticky, making up for an interesting sensation where you would crunch into crispy skin, then haul off meat with a drag of sauce. Of course, as with most Korean dishes, this fried chicken tends towards the slightly spicier side. Word of caution to those who may not be able to handle it.
Shake Shake Rice Box ($9.90++) 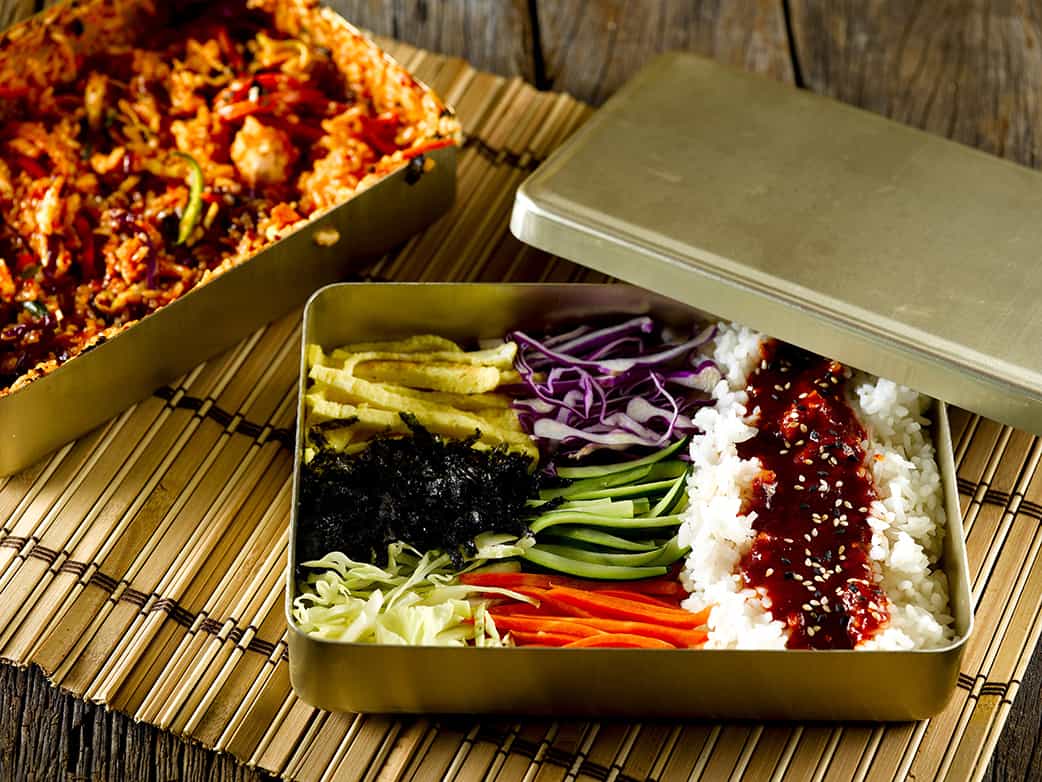 While the dosirak plays on Koreans’ nostalgia by reminding them of  their childhood, this thin metal rice box that requires a good hard shake as preparation is a form of entertainment for Singaporeans.
Presented with a neatly arranged bibimbap and its lid on the side, the metal box invites diners to replace its lid, and shake the life out of it. What results is a gloppy mess. But as Singaporeans, we know not to judge a food by its cover — what with our love for imperfect-looking hawker food. And indeed, the gochujang-coated rice, mixed well with crisp vegetables, tasted divine.
Though the rice box tastes fine in its original flavour, diners have the choice of adding pork, chicken, or beef into their bibimbap at only $2 as well.
Ginseng Chicken Soup ($17.90) 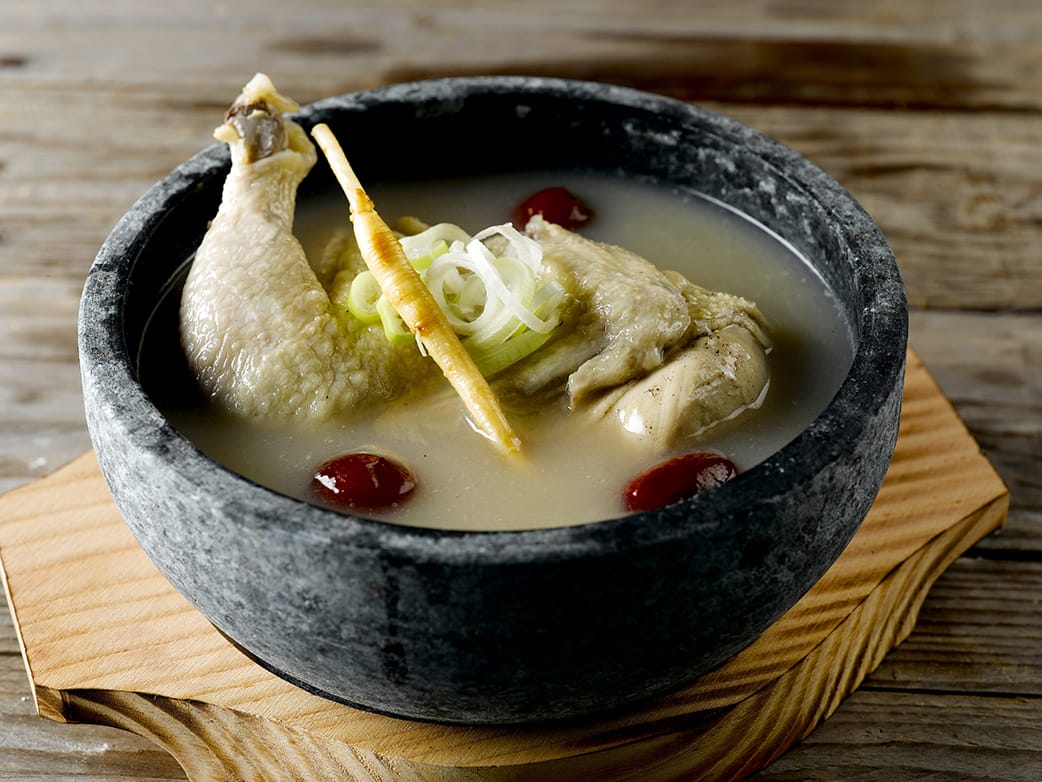 This stew is one of the best-sellers in K-tower, and for good reason. As the broth runs down your throat, it warms not only your stomach, but, as cliched as it may sound, your heart. This steaming bowl of soup harks back to the kind of home-made chicken soup your mother probably lovingly prepared for you while you were sick — complete with the root of ginseng submerged for added health benefit.
Mild-tasting and light, this soup managed to set us up wonderfully for the ensuing, never-ending flow of seafood.
9-Tier Seafood Tower ($298++) 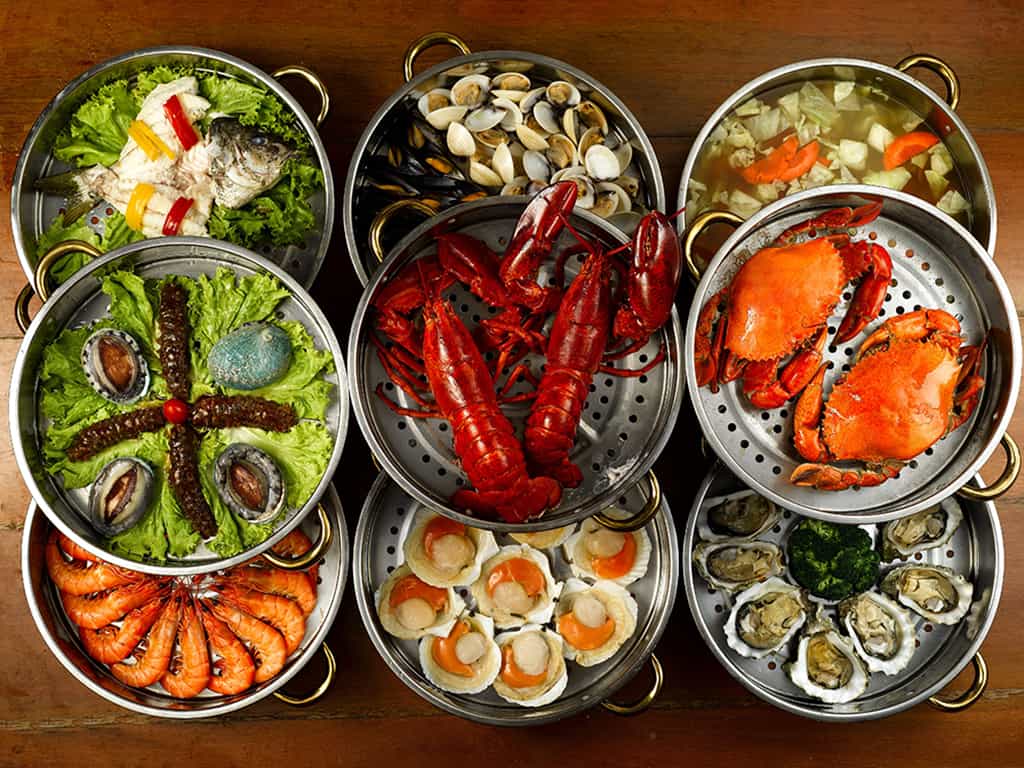 At last. The star of the meal. 9 tiers of extremely fresh seafood, steamed to preserve their true flavour.
The 9-Tier Seafood Tower is the tallest of the lot, large enough to serve 7-8 persons. Other heights include 3-tier, 5-tier, and 7-tier. With prices starting at $58, K-Tower may perhaps be one of the most value-for-money dining choices in the area, perfect for gatherings.
Complimentary seafood soup is served as the base. However, diners are able to swap this out for various other flavours such as Army Stew Soup ($10) or Ginseng Chicken Soup ($20) as well.
K-Tower sets itself apart by cooking with live seafood fresh from the tank. In fact, the lobsters were displayed so prominently, you’d have to avert your gaze while brutally eating their brethren.
The seafoods are cooked beforehand, hence, feel free to dig in immediately once the tower is served. 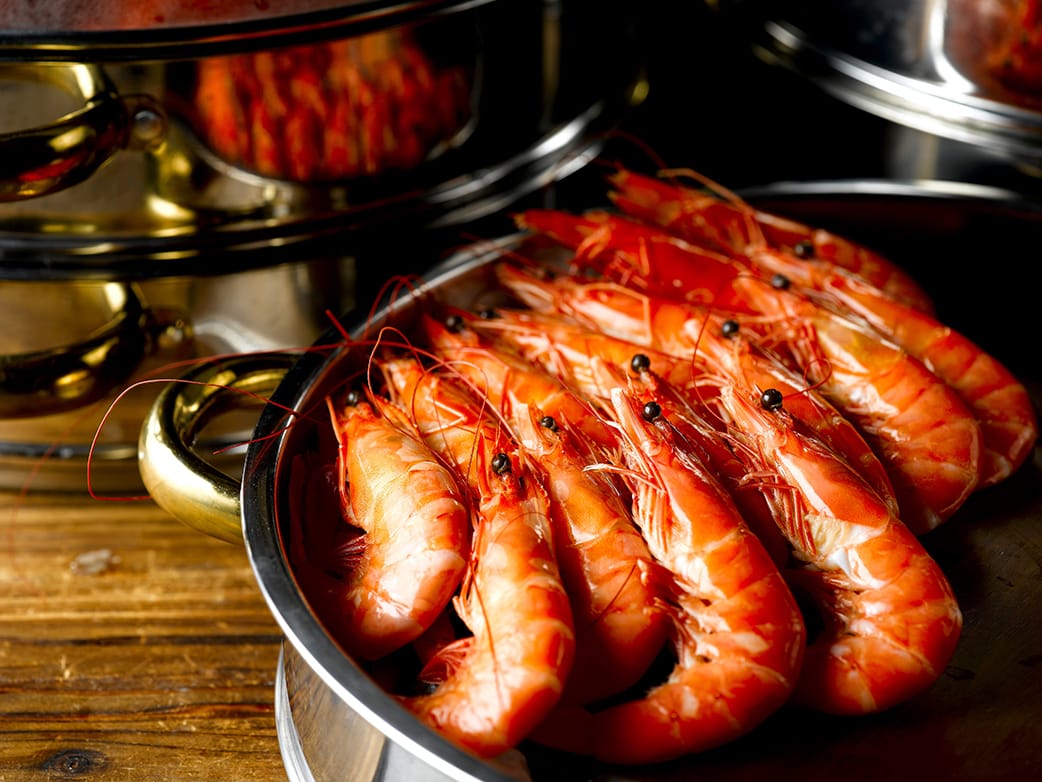 A definite must-have in any steamboat party, the golden prawns tasted as good as they looked. 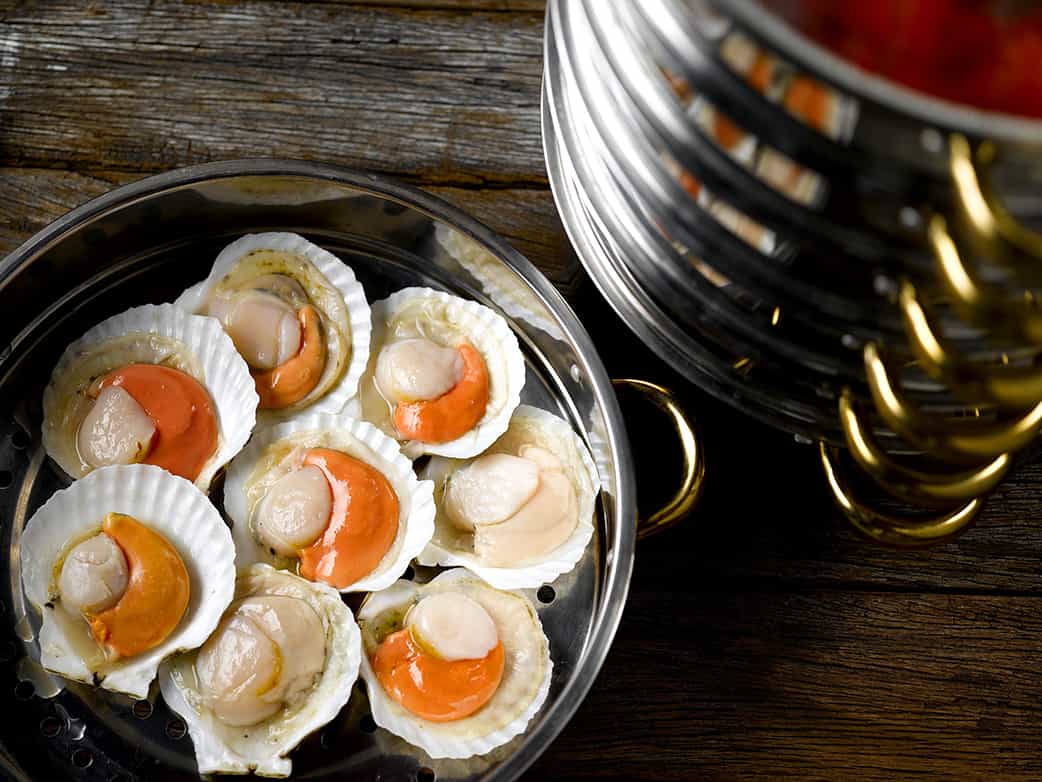 Tender, succulent, and not at all fishy. This pretty much sums up the taste of all the shellfish that was served. 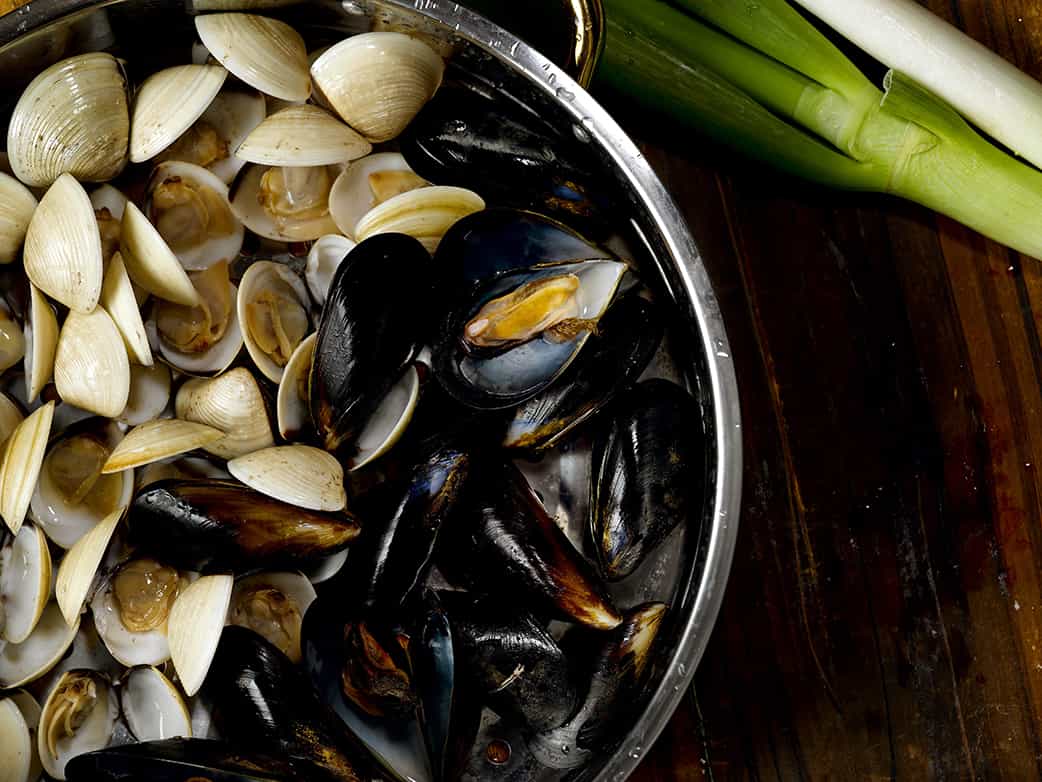 Try not to draw any blood while you and your friends compete for the last clam. Those things are so addictive, you’d be popping ten in your mouth without realising — until your friends chide you for it, that is.
At this point you’d probably notice the built-in bin on top of your tables. One push against it, and a convenient disposal for the multiple shells you’ve accumulated is revealed. 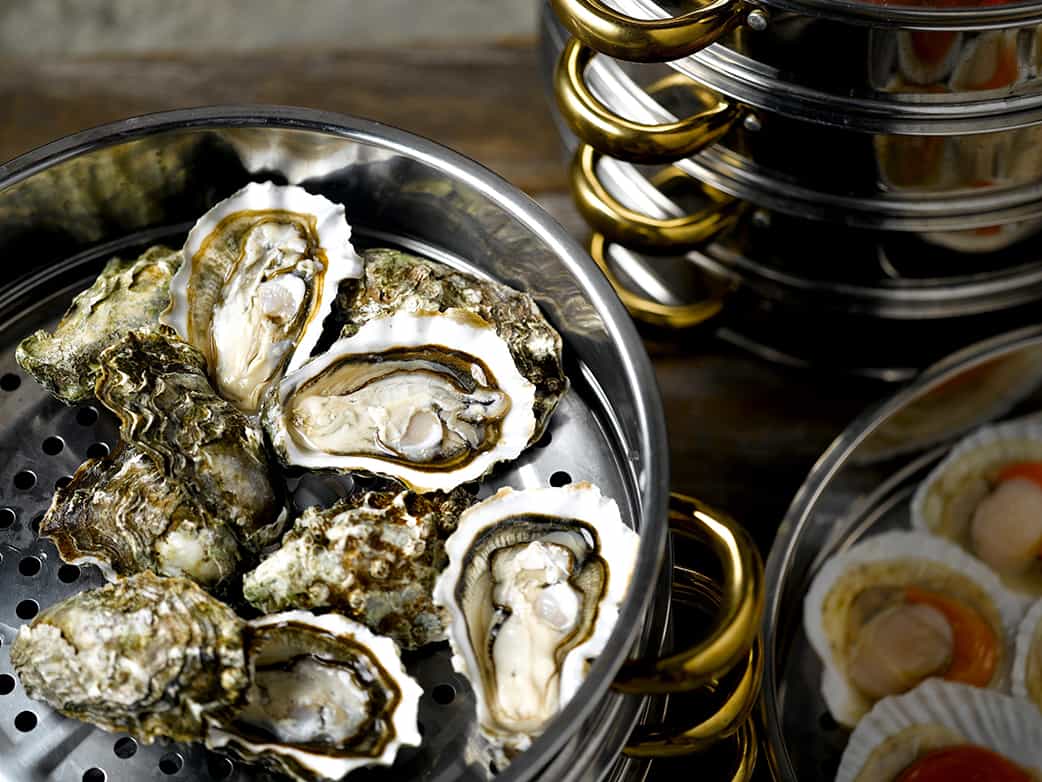 The gleaming and glistening oysters were incredibly fresh and the texture was smooth and silky. 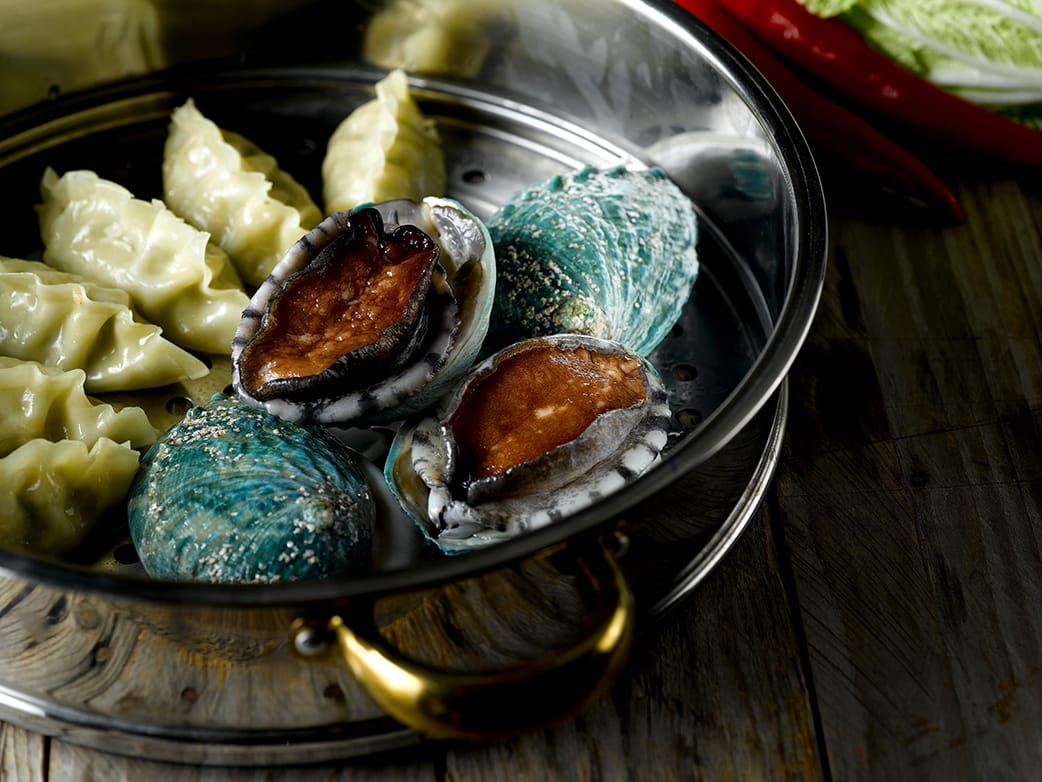 At an additional $90, one can swap out either the sea cucumber, or the gyoza for abalone. A staff would then aid your table in wrenching the mollusks out of their jewel shells, as well as cutting them into bite-sized pieces for sharing. Sweet and chewy, with a faint taste of the sea. 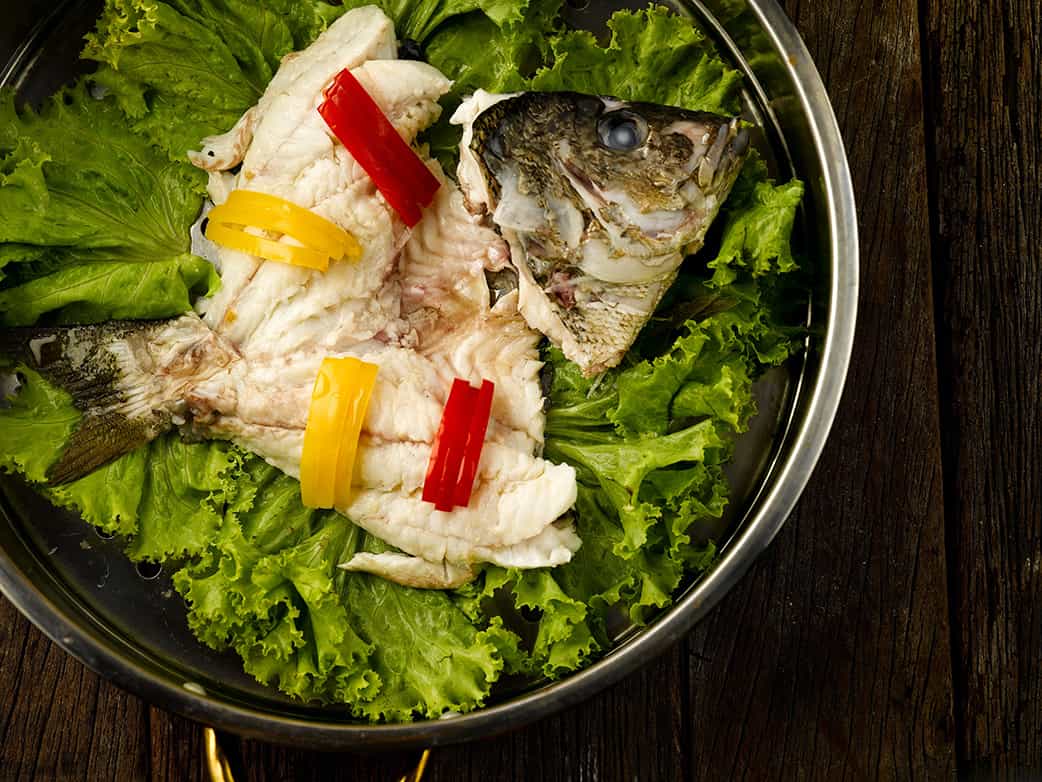 The fish wasn’t as tender as we hoped it would be — but it served as a good breather in between the varieties of shellfish. 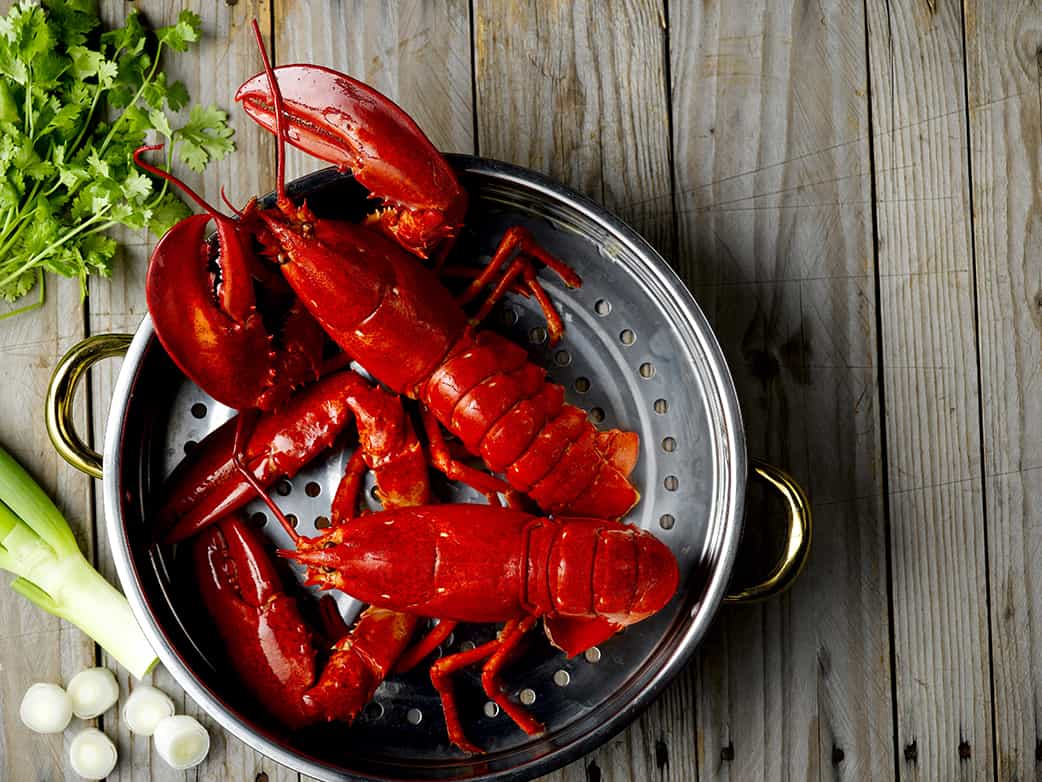 Full of chunky, fleshy meat, the Boston lobsters would probably excite most. Call dibs on the claws as soon as you can — though its meat is difficult to extract, they are the best-tasting and worth all the muscle. 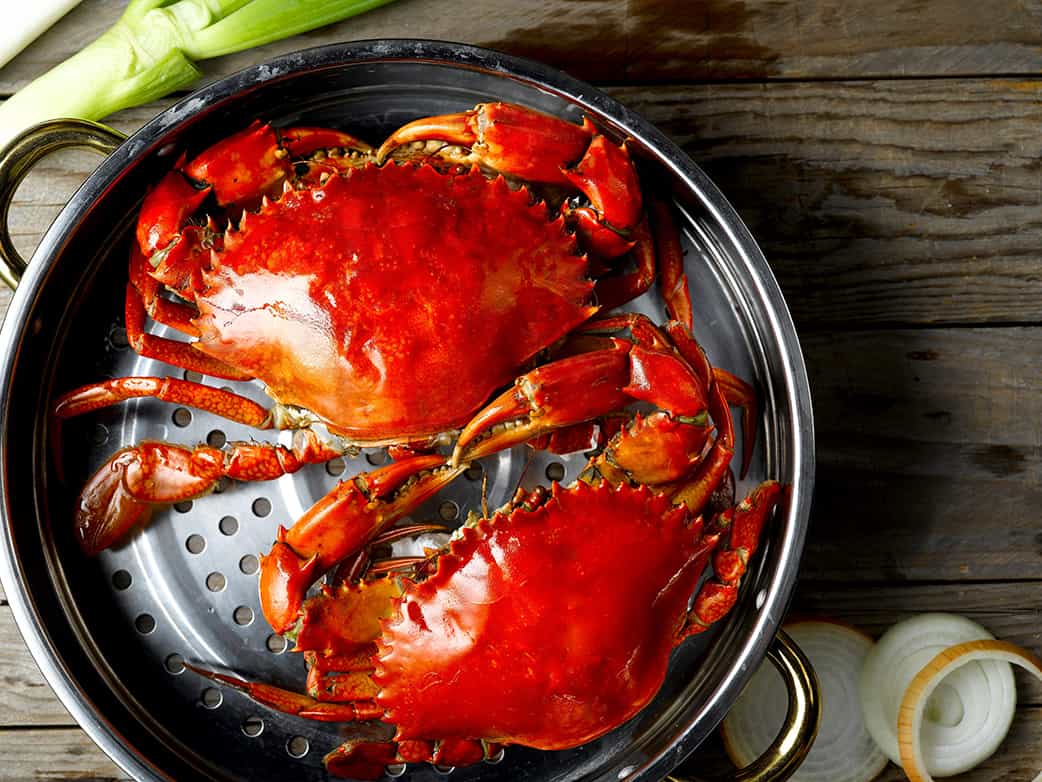 Of course, the local experience isn’t complete without some choice crabs. These Sri Lankan crabs, usually used to prepare your favourite Chilli Crab, yielded tender, snow-white meat with a tinge of sweetness. Getting down and dirty cracking open the shells is worthwhile.
Finally, when you’re down to your final tier — and if your belt has yet to burst — it would be a good time to order some meat and mushrooms for a good ol’ fashioned steamboat session.
The seafood soup, marinated with the combination of juices from the above tiers, already tasted amazing on its own. We’d imagine that throwing some ramen would sufficiently make for this epic meal’s flawless finish.
Trilogy Rice Cake With Honey ($5.90) 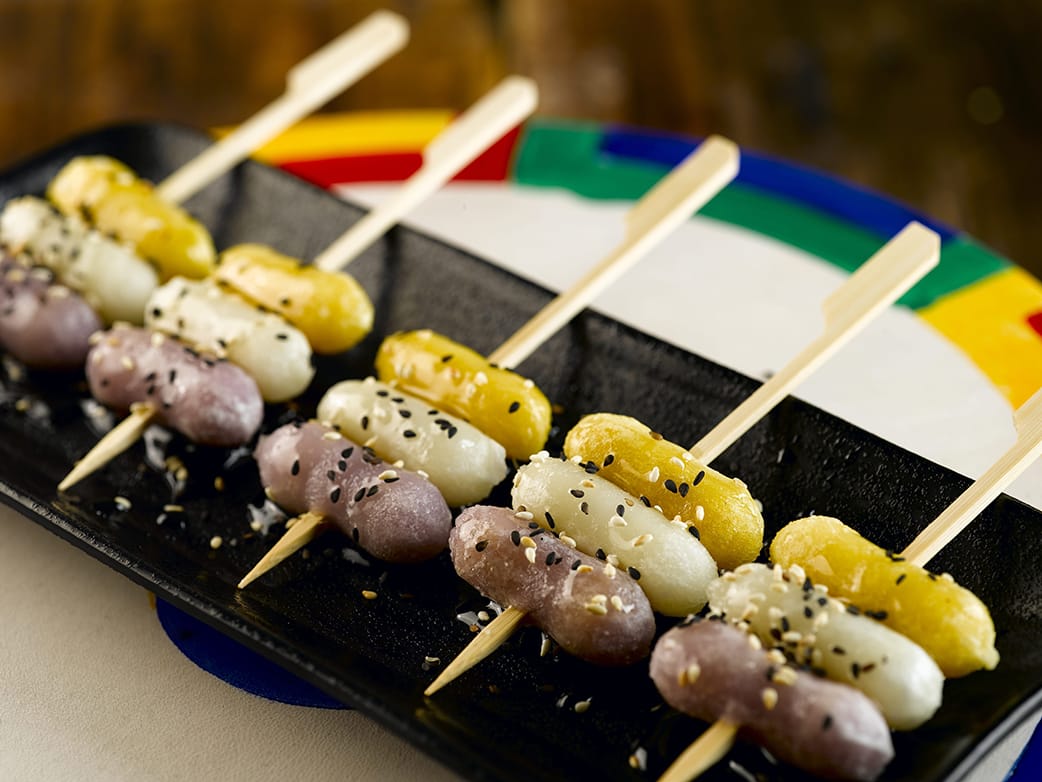 You always have to make sure that there’s room for dessert. Once you have your own taste of this, you would be glad you did.
Dessert came in the form of dainty, colourful skewers — three differently-flavoured fried rice-cakes, drizzled copiously with honey, and sprinkled with some sesame seeds. But don’t be fooled by its simplicity. One bite into the purple taro-flavoured cylinder, and you’d be scarfing down the rest of the skewer within the next second.
The next flavour on the skewer was cheese, which initially drew looks of uncertainty. It was hard to imagine something as savoury as cheese going well with the sweetness of taro and pumpkin, yet surprisingly, it did. The slightly salty, melted cheese oozing out of the rice-cake tasted superb with the nectarous honey, deftly priming the palate for the next sweet-tasting rice-cake, pumpkin — which had to be our personal favourite of the lot.
Address:
74 Amoy Street, Singapore 069893 (five-minute walk from Tanjong Pagar and Telok Ayer MRT stations)
Opening Hours: 1130 — 1430, 1740 — 2200
Contact: +65 62219928
Website: http://www.ktower.com.sg
Facebook
Instagram