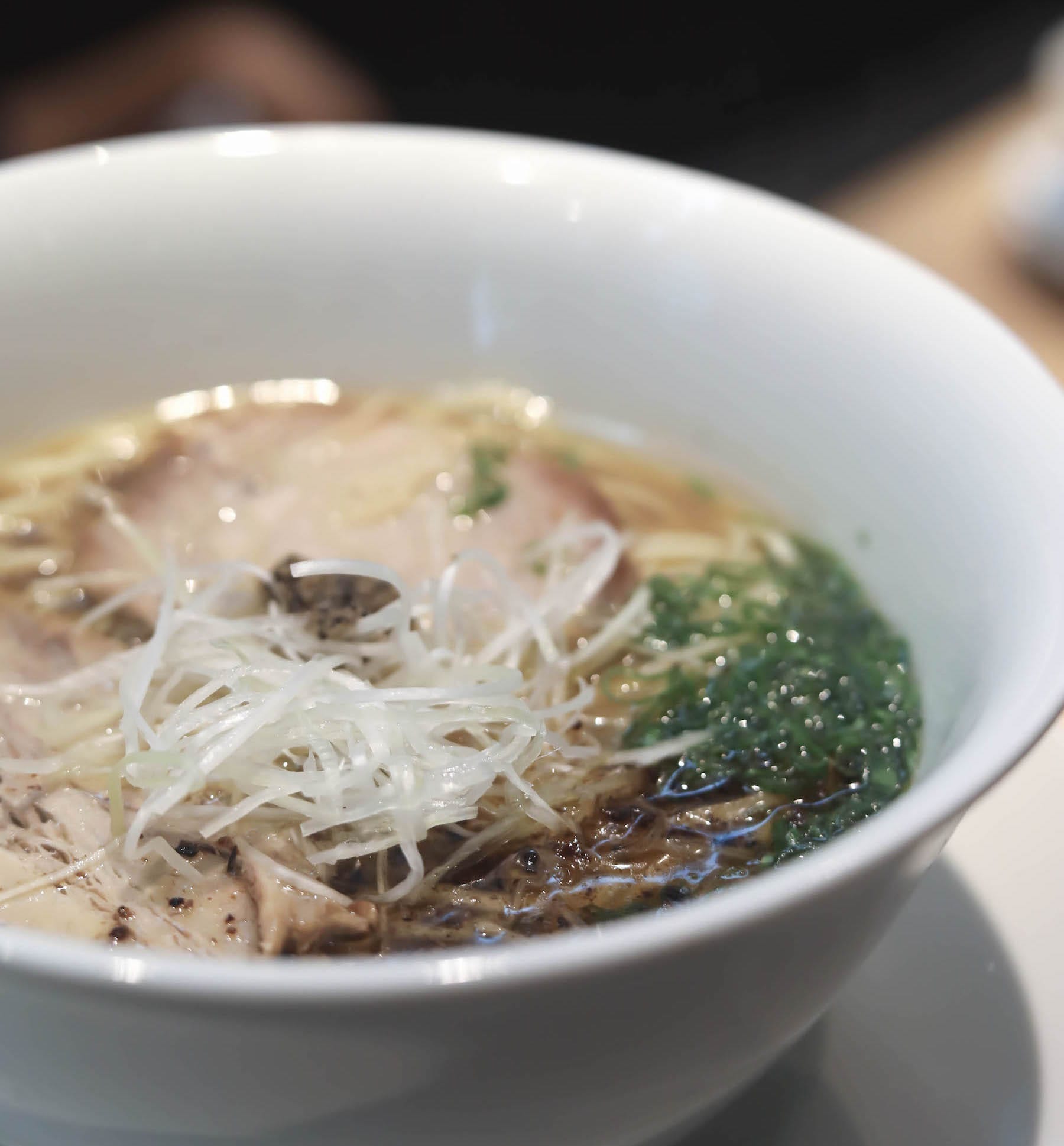 It’s no secret that Singapore’s a foodie paradise, and our shores have been graced with yet another delicacy – Tokyo’s well-loved clam broth ramen from the award-winning Konjiki Hototogisu, which just opened their first overseas flagship outlet at Chijmes!
For those of you who’ve never heard of Konjiki Hototogisu, the ramen store was founded by Head Chef Atsushi Yamamoto way back in 1996. Despite occupying a humble space that can only accommodate up to 8 diners, the queue at the Shibuya outlet before it recently relocated had an average waiting time of 1 hour. 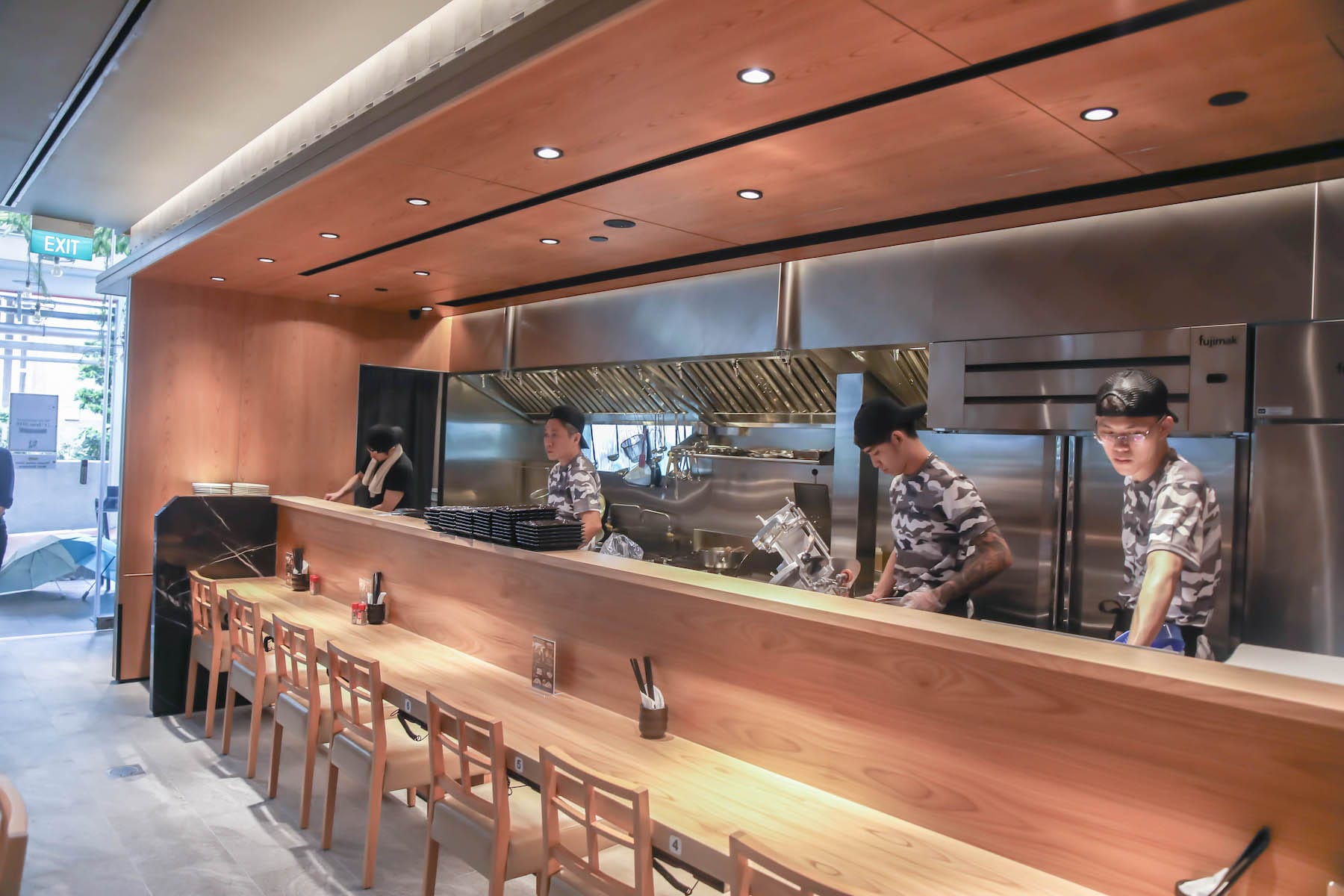 The interior design is clean and simple, true to modern Japanese aesthetics!

Thankfully, Singapore’s flagship outlet is a lot more spacious with 27 seats indoors and a possible alfresco seating area that can fit 12 pax comfortably! 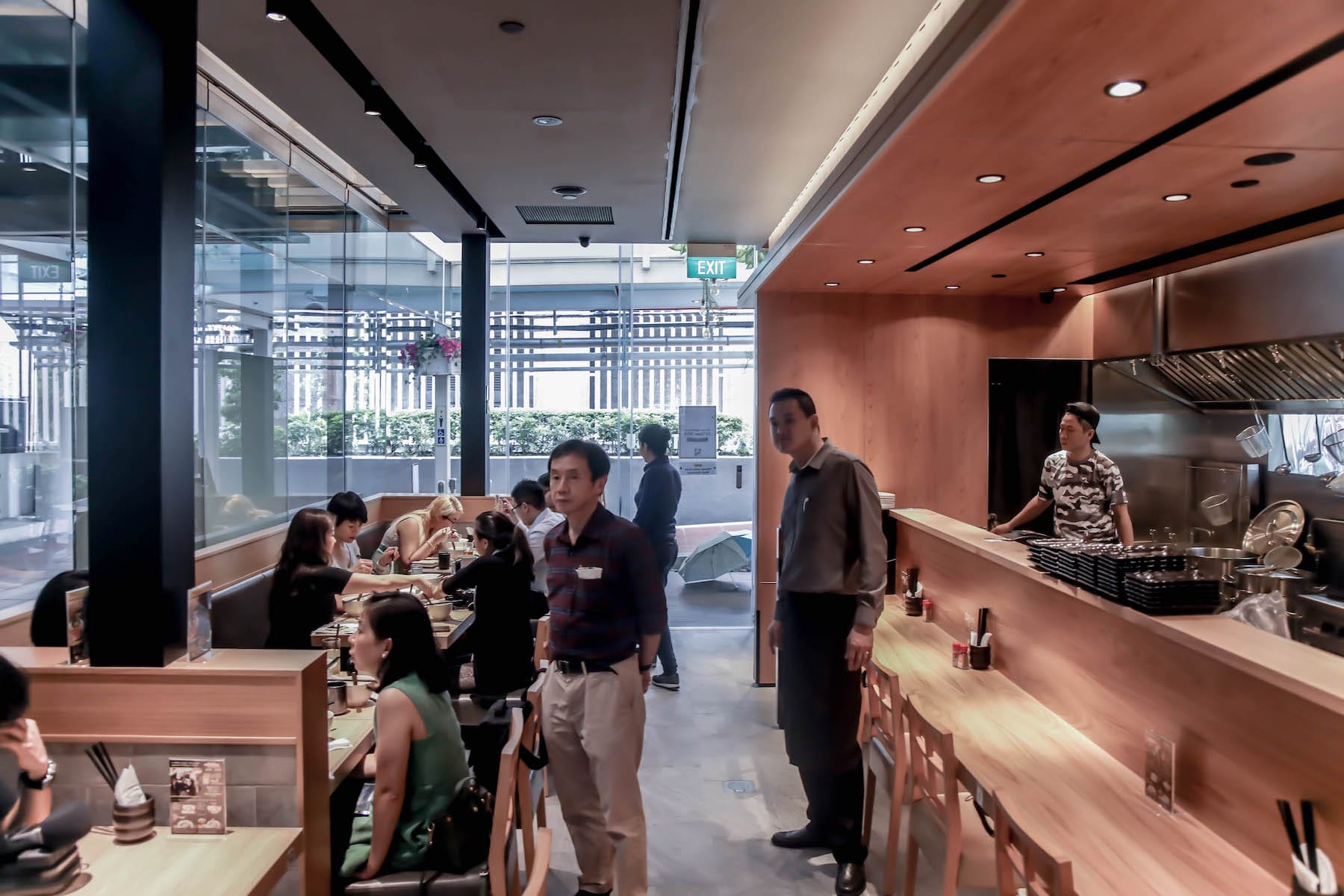 The Japanese dedication to perfection

In order to ensure that the standards of the ramen served here is on par with the ones served in Tokyo, the Singapore crew flew to Japan for a week of training. In addition to that, Head Chef Yamamoto himself, the original creator of the clam soup base ramen, is here to personally oversee the setting up and launch of the flagship store! 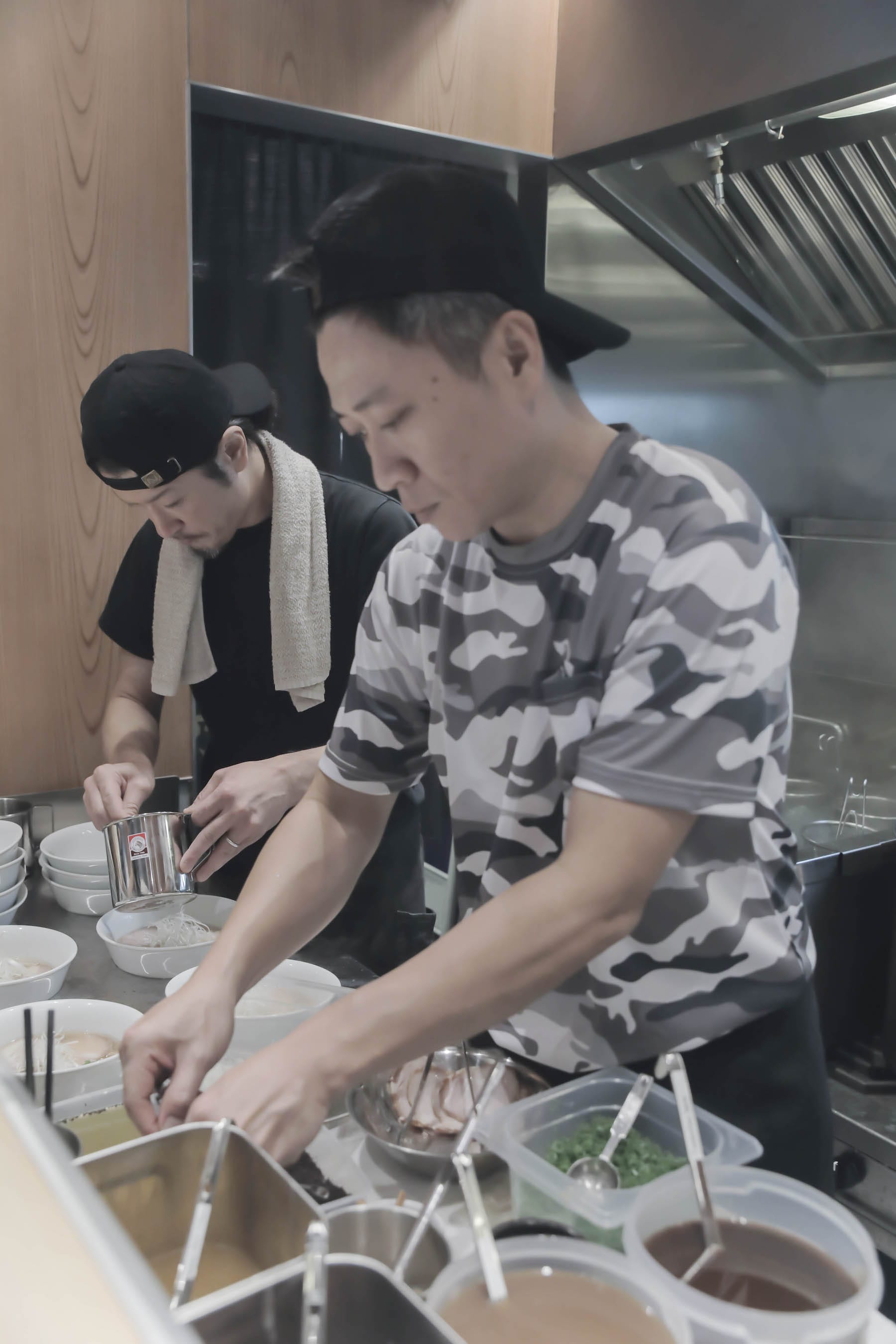 If you’re heading down some time this week, you might be able to catch Head Chef Yamamoto (in black) hard at work!

Konjiki Hototogisu also takes pride in the fact that almost every component of their ramen is housemade with no MSG used, and it’s evident that a lot of thought has gone into the making of each ingredient. 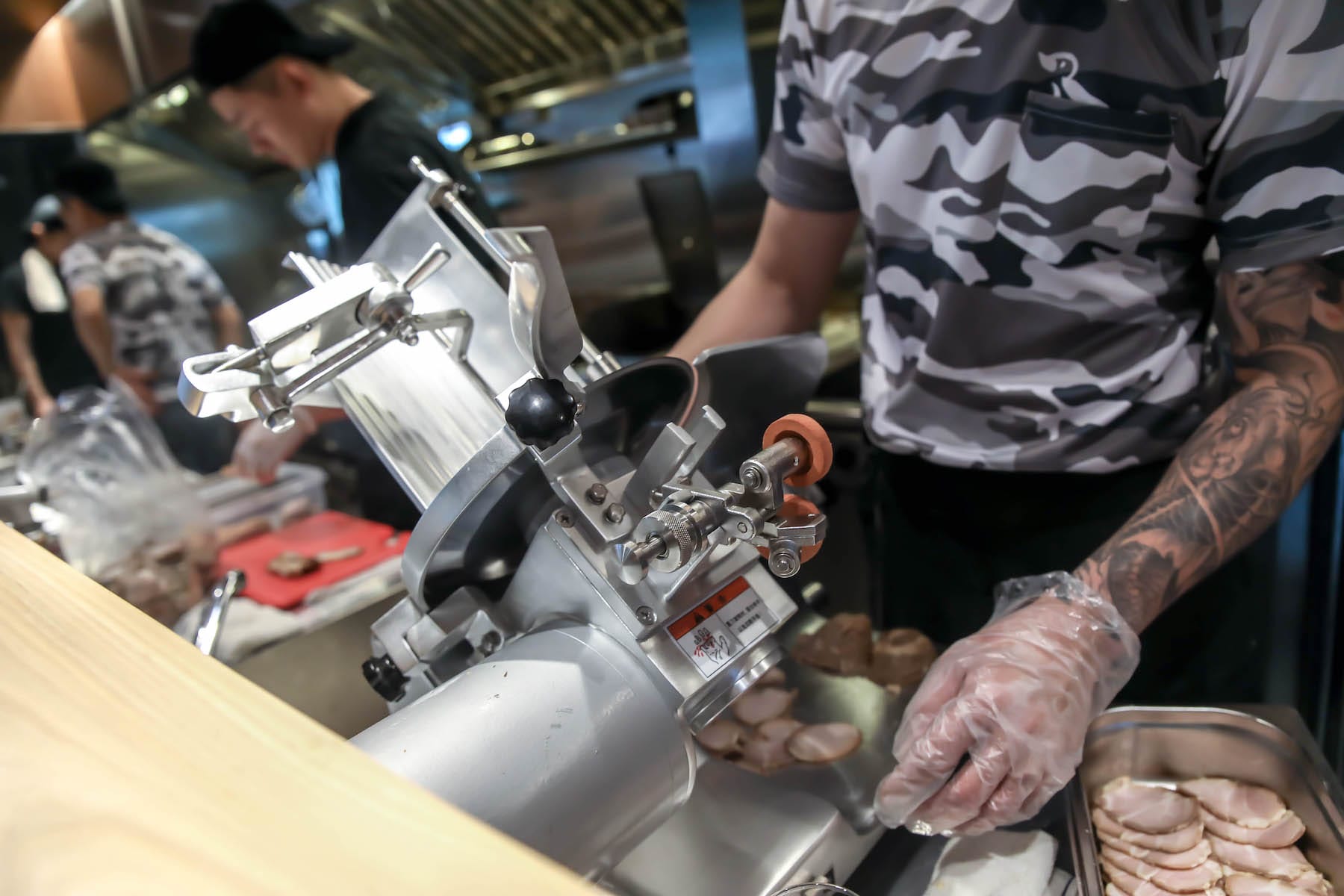 Most of their ingredients are prepared in-house!

Their signature Triple Soup base is made from a well-thought-out combination of Hamaguri clams, pork bone, and Japanese dashi broth, their Sous-Vide Cha Shu is marinated and slow-cooked till tender so that it produces a flavour similar to that of cured ham, and their noodles are made from premium whole grain Haru yo koi flour specially imported from Japan to ensure that it’s not just soft and springy, but also healthy! 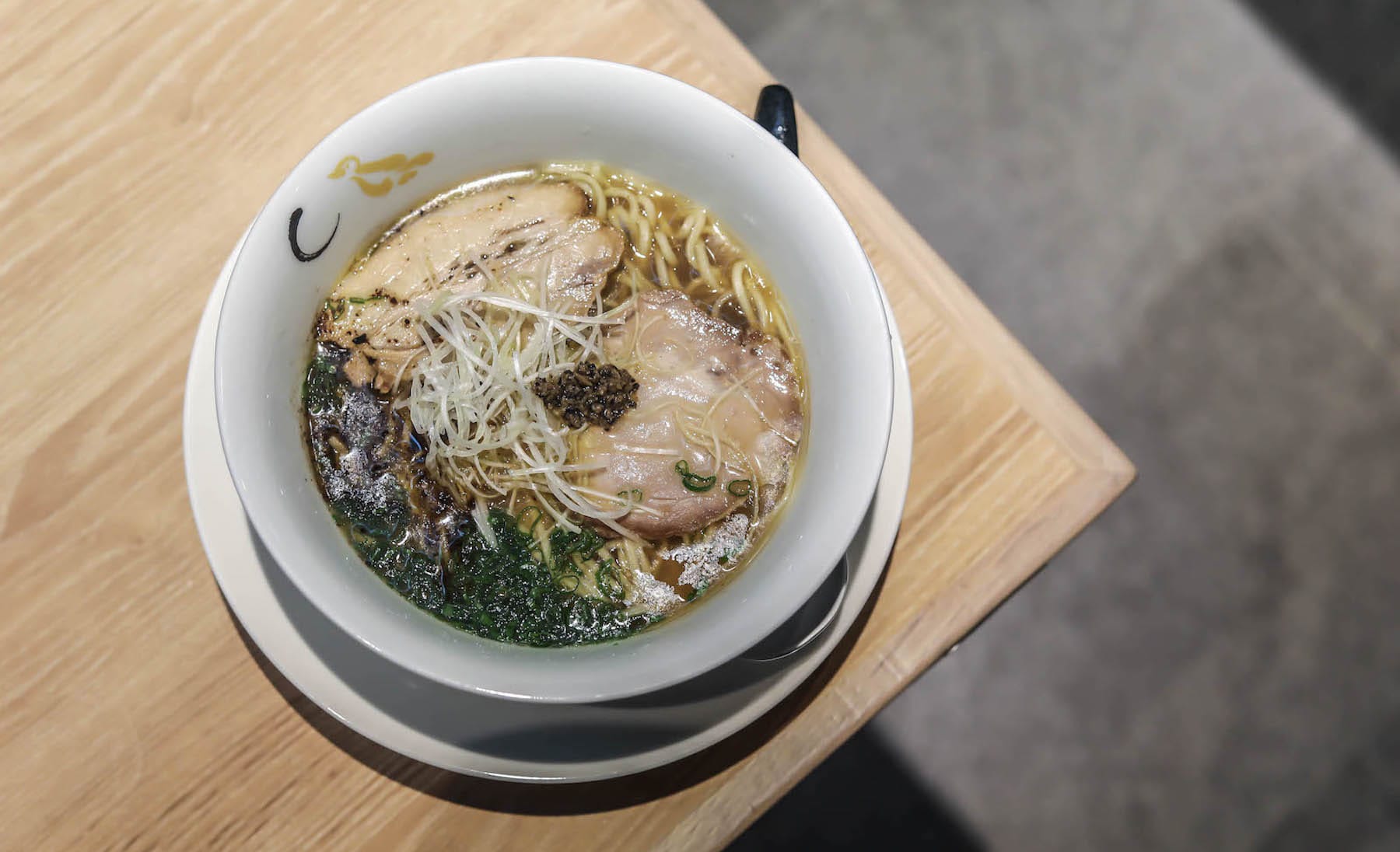 If you’re a seafood and truffle fan, their signature is not to be missed – the Shoyu Hamaguri Soup Signature is soy sauce-based with white truffle oil drizzled all over before being topped with a generous dollop of black truffle paste.
While extremely fragrant with an evident truffle aroma, it came as a pleasant surprise that the taste of the truffle in the broth was much more subtle and did not overpower the sweetness from the pork and the clam, which also carried no briny aftertaste.
Shio Hamaguri Soup Signature ($14.90) 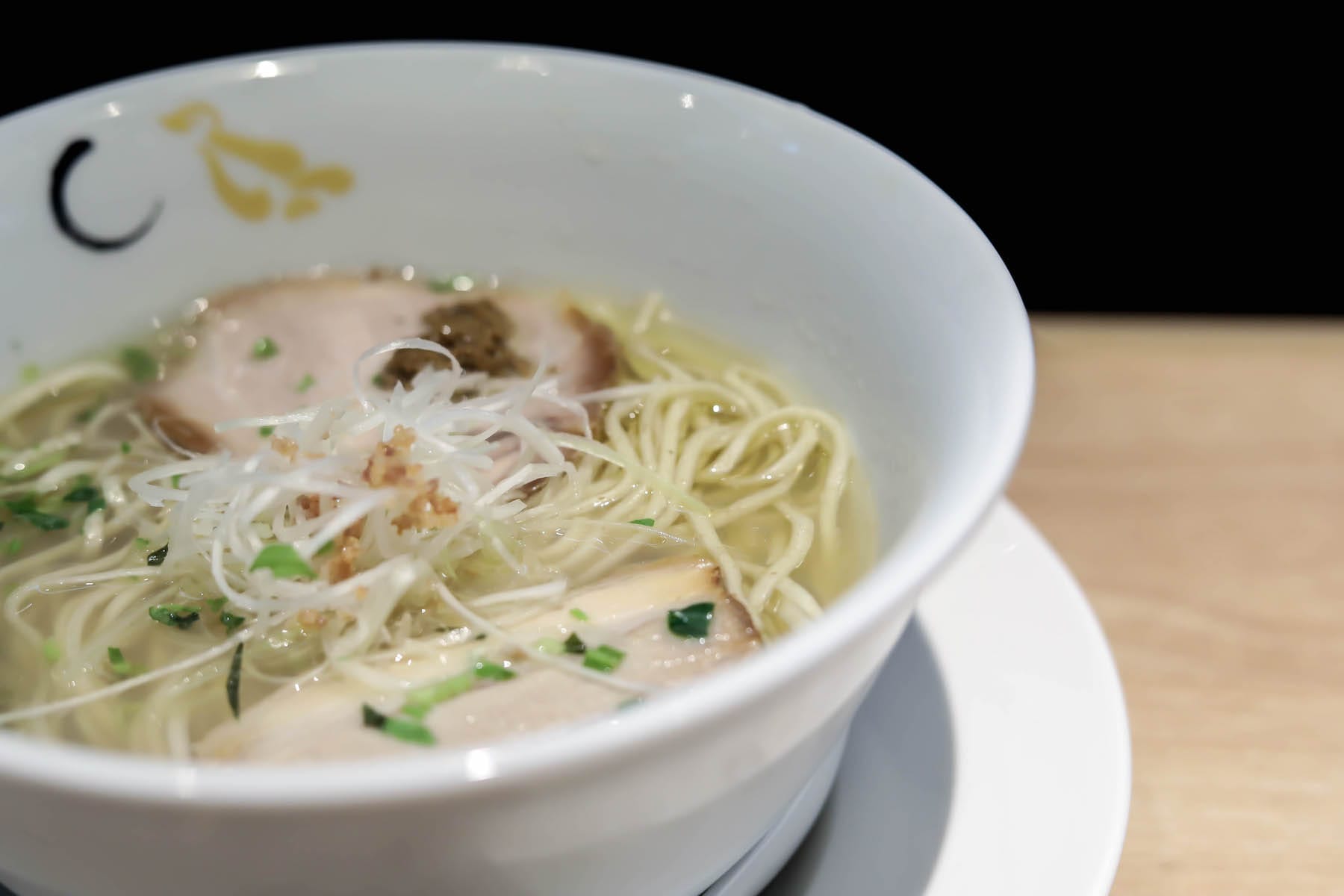 The spring onions even have bacon bits in them for added texture!

For those of you who prefer lighter-tasting broths, opt for the Shio Hamaguri Soup Signature instead, which is salt-based and has no truffle in it. It is no less flavourful than the Shoyu version thanks to the savoury Porcini paste added, but it is less heavy and thick!
Tonkotsu Original ($13.90) 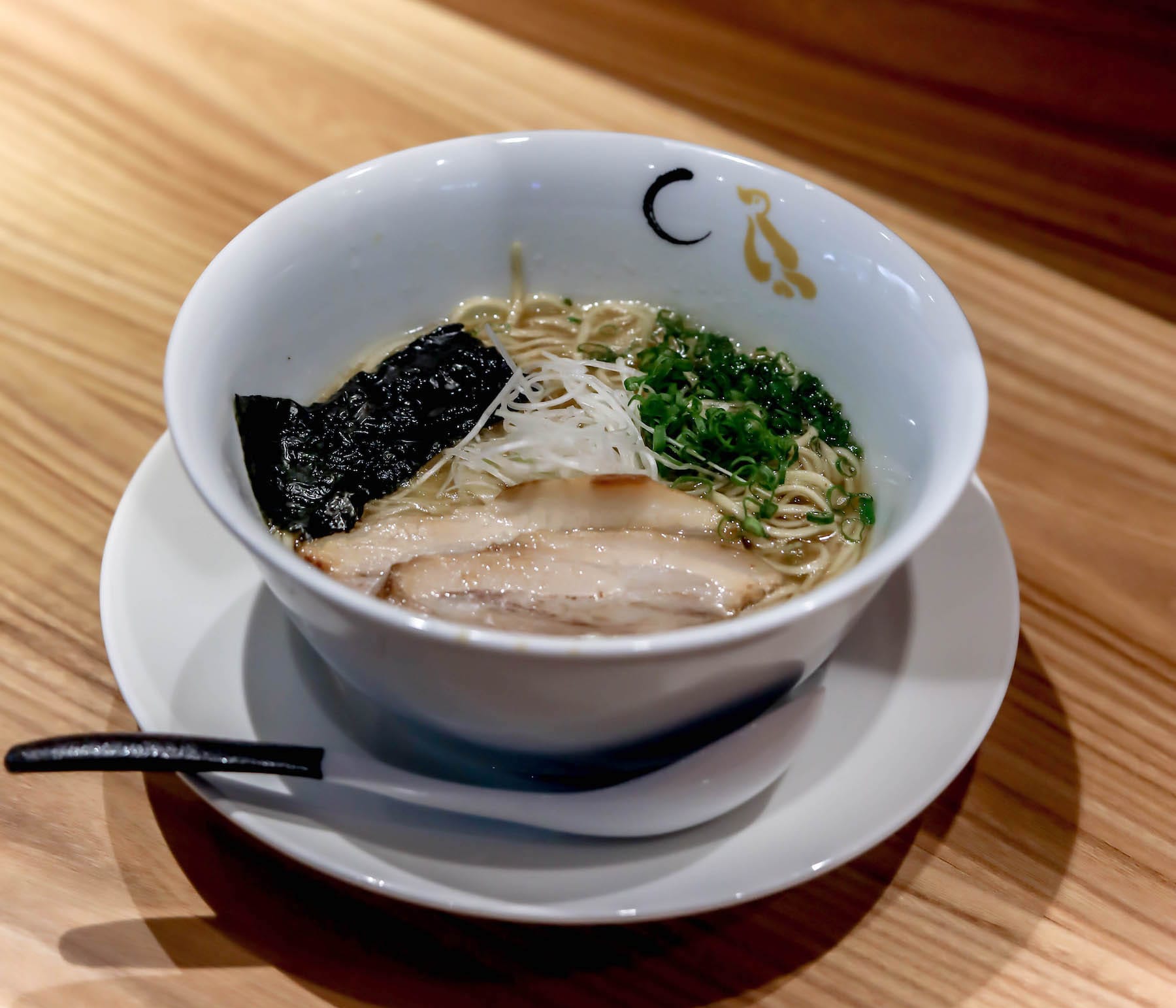 For friends who do not enjoy shellfish, Konjiki Hototogisu also serves Tonkotsu ramen, which uses pork bone broth. Rich and flavourful without being too cloying, the Tonkotsu Original is a little oily because of the pork fat – simply pair your noodles with a pinch of spring onion and you’re all set, because it will help to cut through the oiliness of the broth! 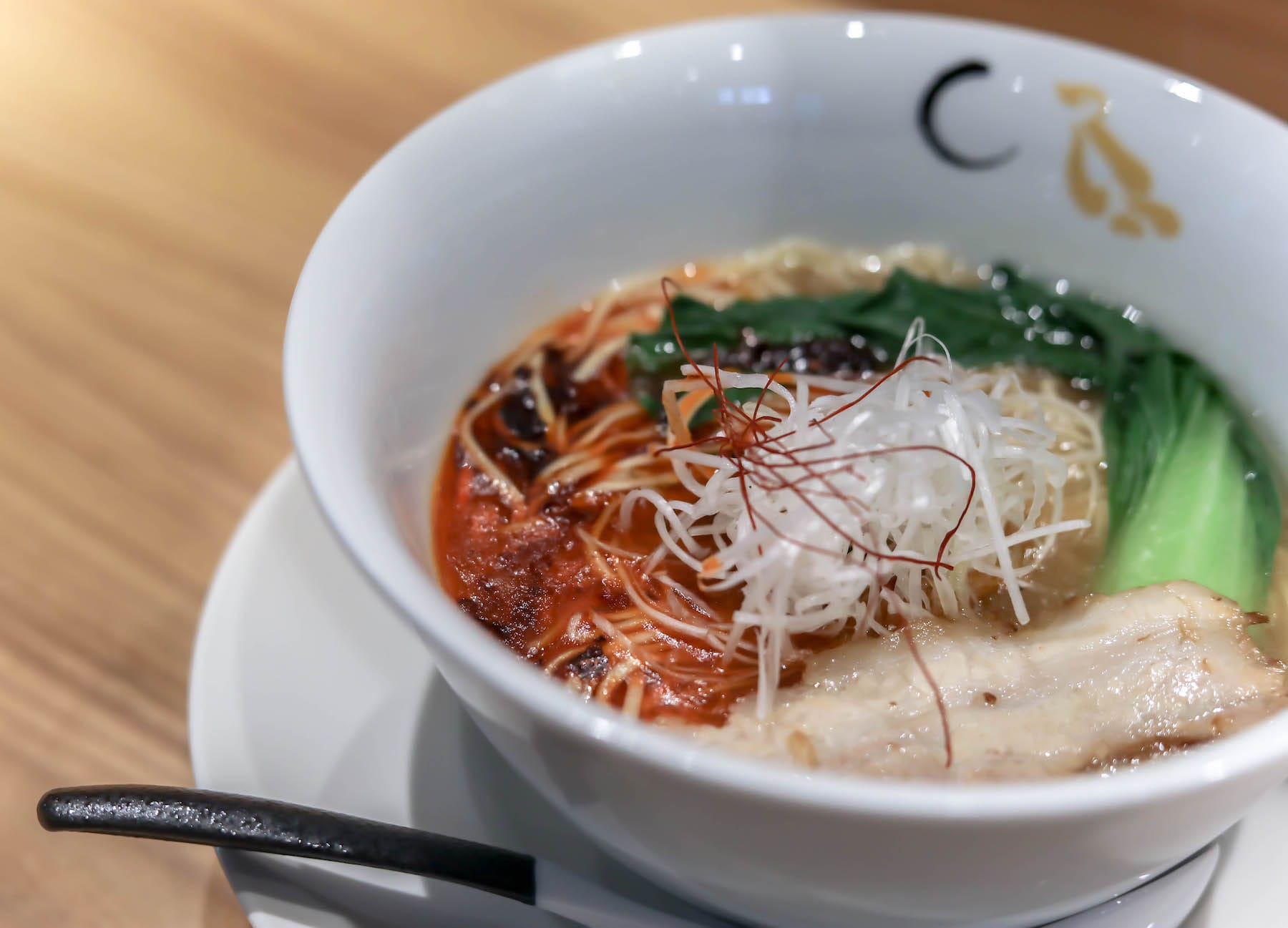 Bok choy is used for this dish, which is reminiscent of the Chinese la mian.

Good for those who can handle spice well, the fiery red Tonkotsu Spicy doesn’t assault your tongue immediately, but it does hit the back of your throat after a while, giving spice lovers a satisfying kick.
The chilli oil does overshadow the pork broth though, but is nonetheless a tasty option for when you’re craving something spicy! 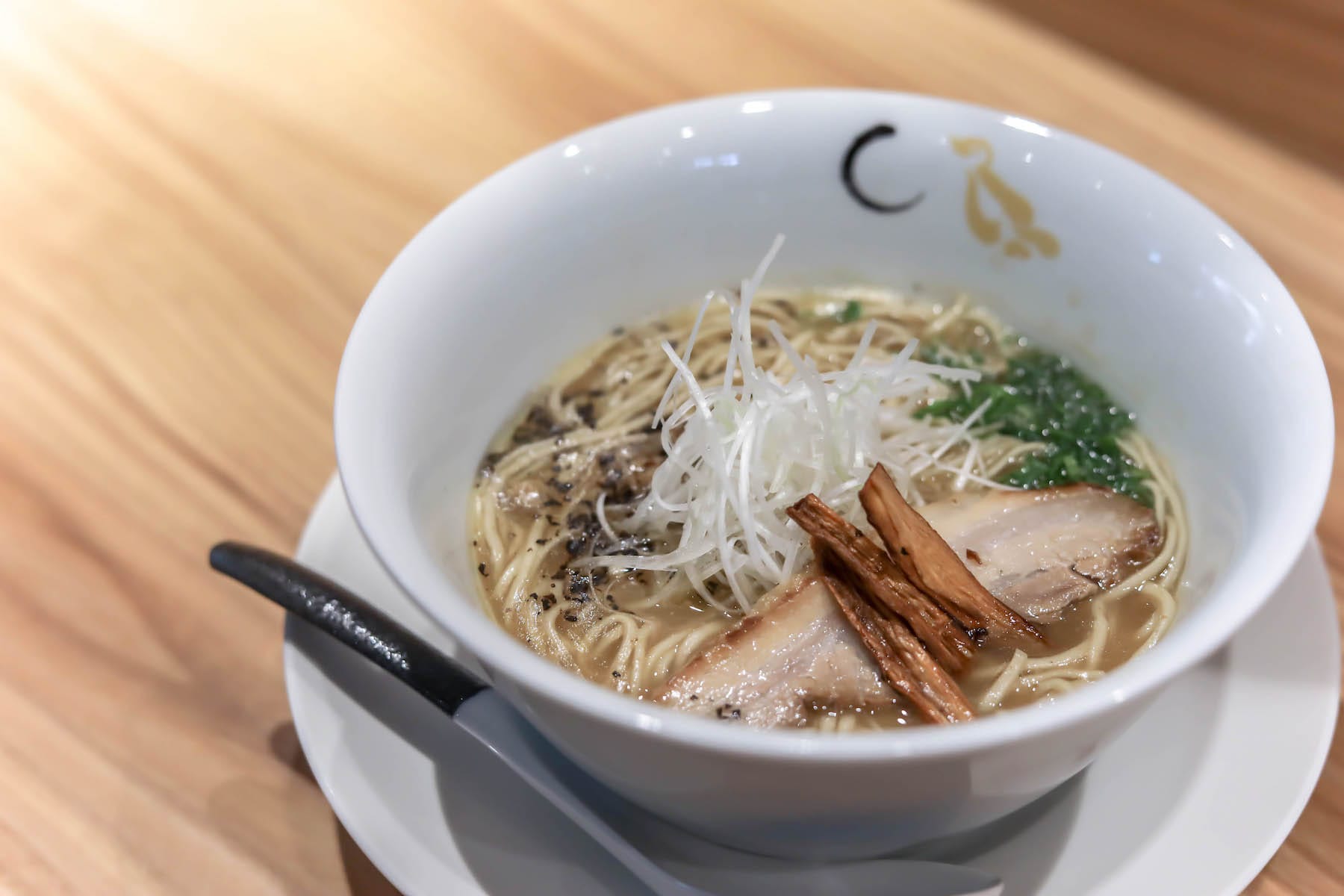 Exclusively available only in Singapore, Head Chef Yamamoto’s Tonkotsu Smoke & Pepper is an interesting spin on the traditional ramen! The broth carries a smoky aftertaste that is similar to that of smoked cured meat, and comes garnished with smoked burdock on top of the usual spring onions and fatty pork slice.

Quality ramen at a steal 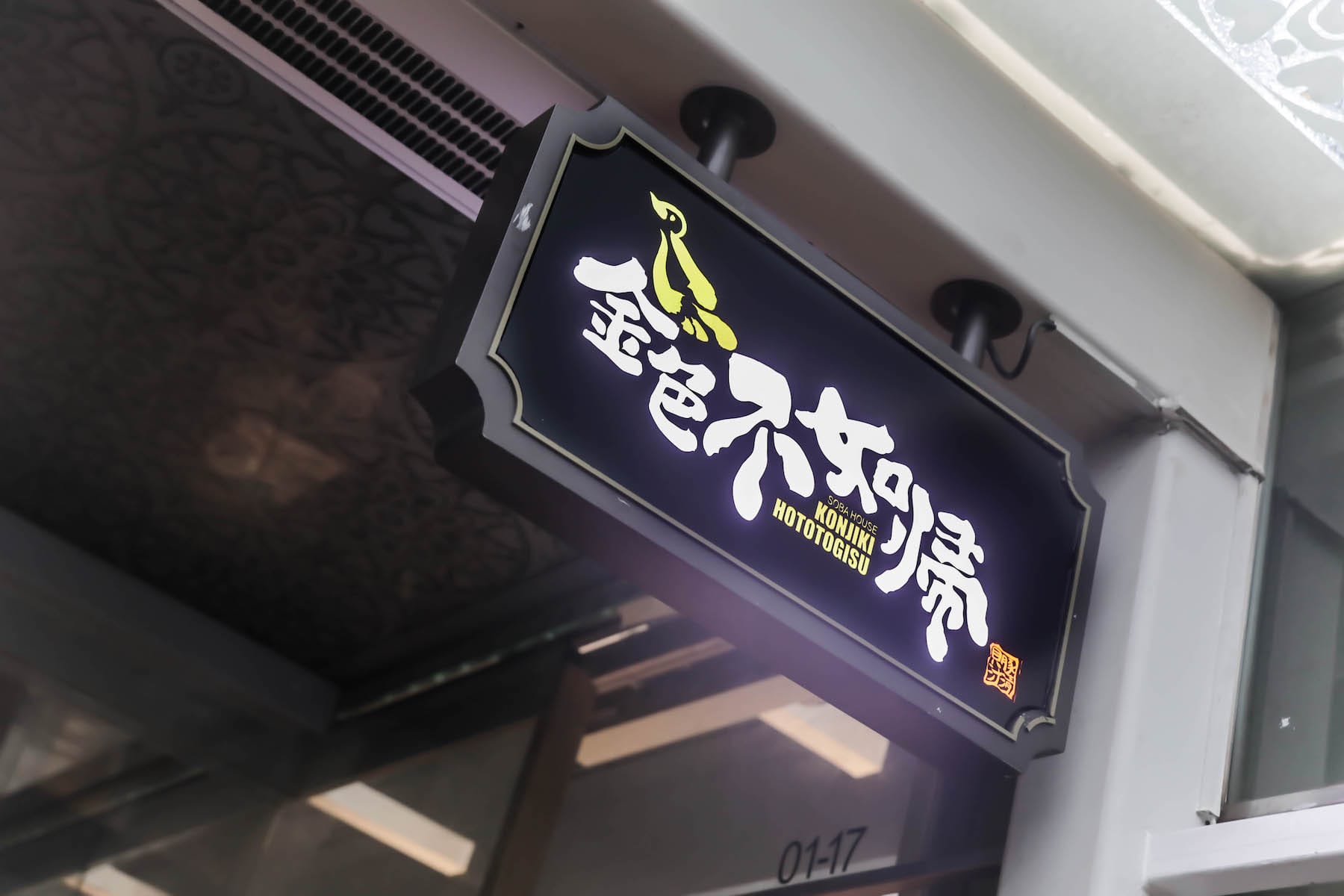 With ramen choices that are not only unique but also delicious, it’s no wonder Konjiki Hototogisu has been listed on Tokyo’s Michelin Bib Gourmand list for 4 years consecutively since 2015.

If you cannot wait to slurp down their ramen for yourself, a soft opening will be held on 21st June from 6.30PM – 8.30PM, a day before the official launch on 22nd June. As an added bonus, Japan Food Holdings Rewards members will get an exclusive 20% discount for the first week of its opening from 22th – 28th June, so sign up for free here if you’re not yet a member! 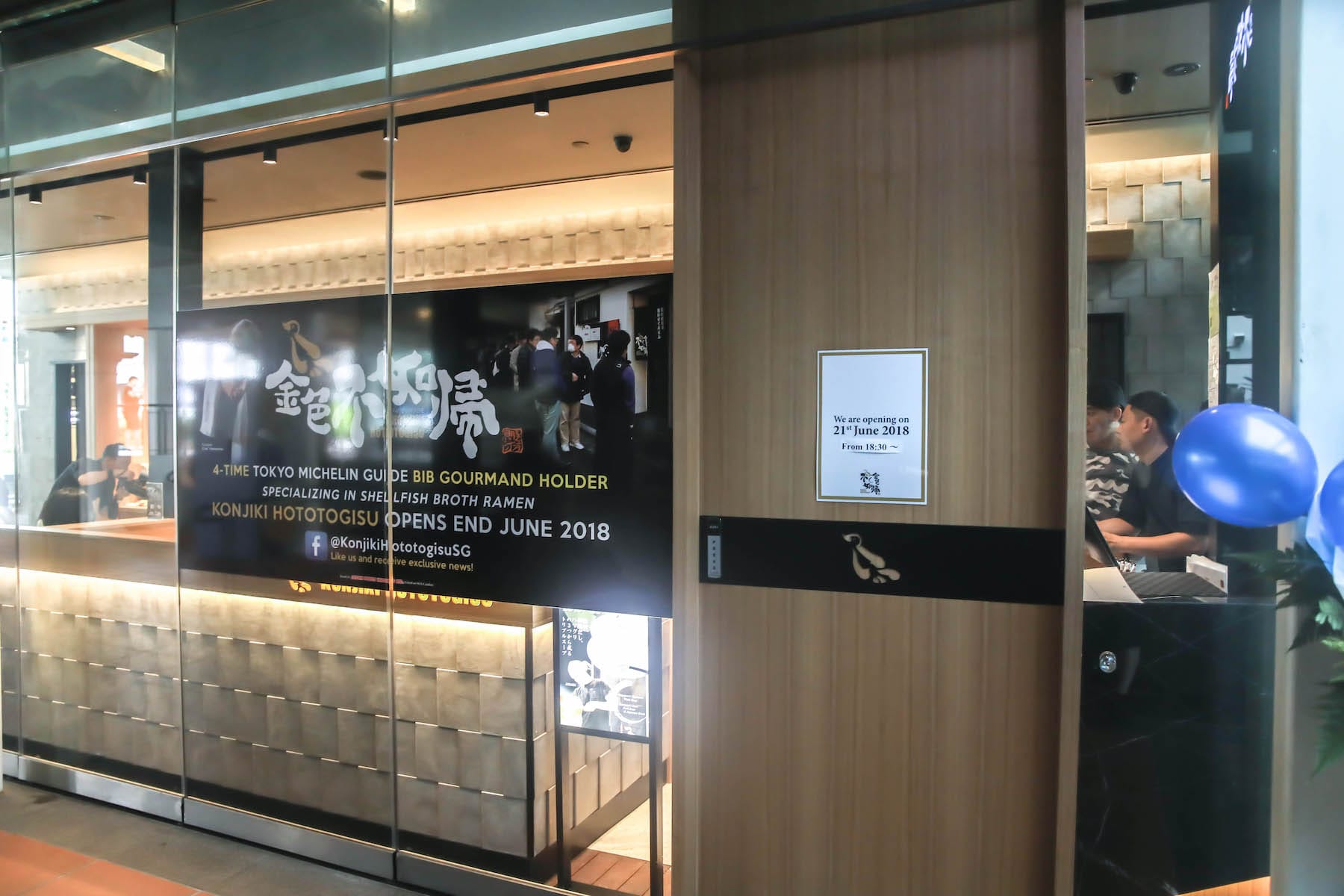