Sitting prominently with its loud red door-front amidst the numerous establishments along the bustling neighbourhood of Outram Park, is the new brainchild of two close buddies, whom with their great love for plants, aspires to bring out the romanticized notion of dining – an element that is widely portrayed in this neighbourhood.
Albeit only less than a month old, the elaborate food offerings and carefully picked decor says otherwise of its age. The exposed walls were deliberately knocked down to reveal a historical side of the previous tenant, showing a character that embodies the appreciation of past cultures. Quirky art installations and stimulating paintings were casually plastered around the shop space, almost like a canvas for the two young men to unleash their creative desires. 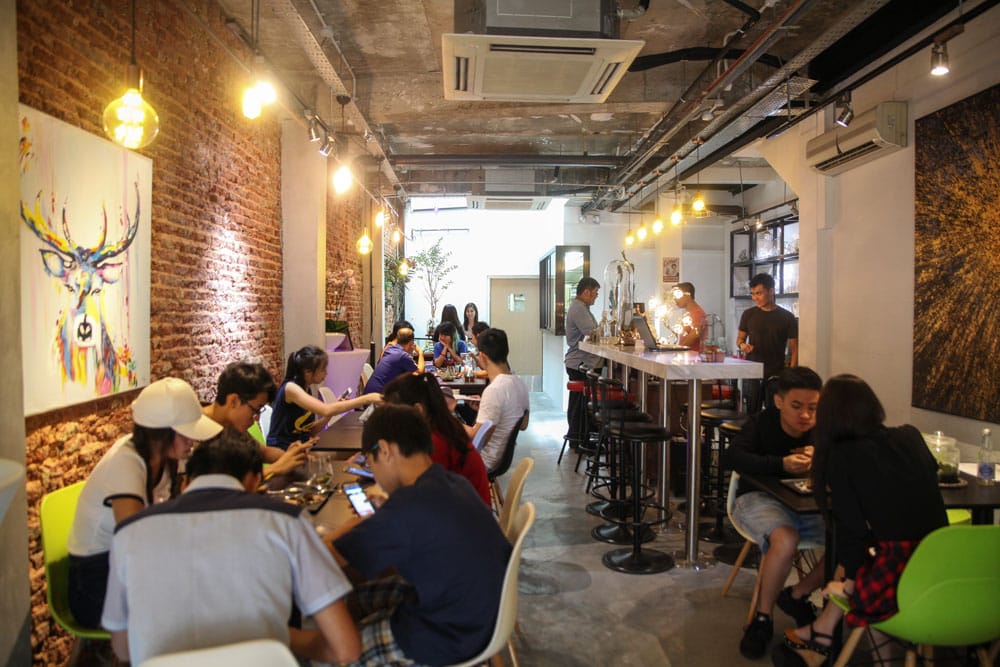 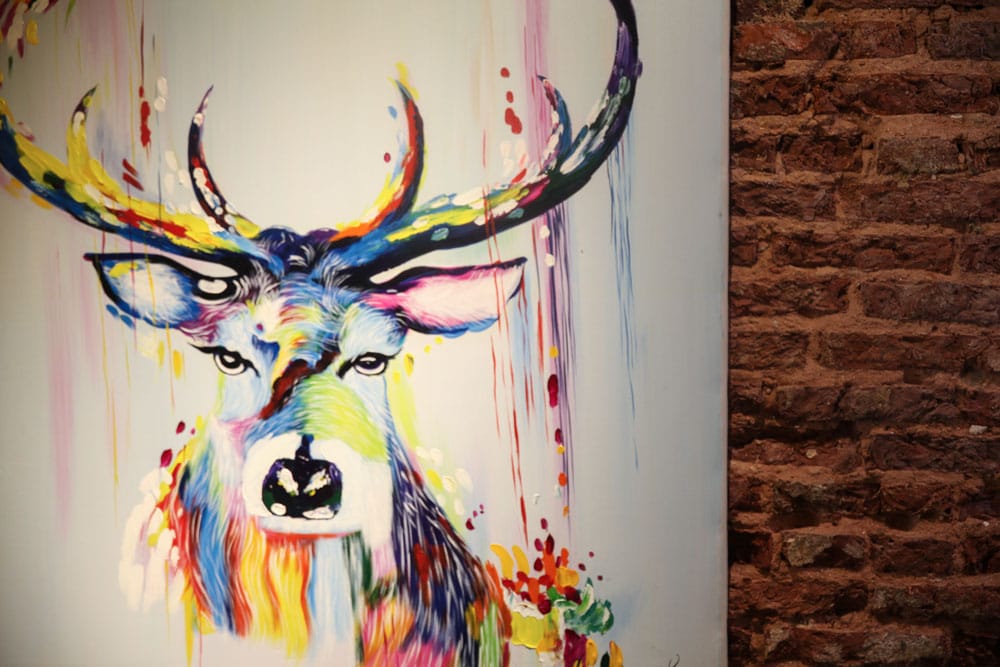 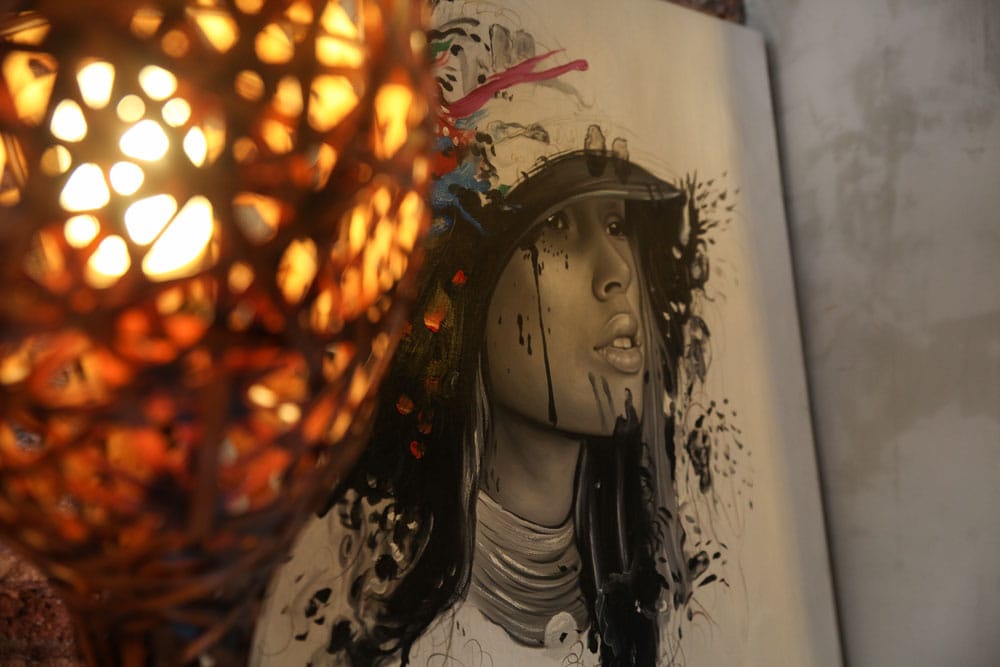 From the moment you step into the restaurant, expect to see plenty of potted plants artfully arranged in the cafe – which speaks volume of the owners’ passion and connection with nature and art.
Crabcake $13.00+ 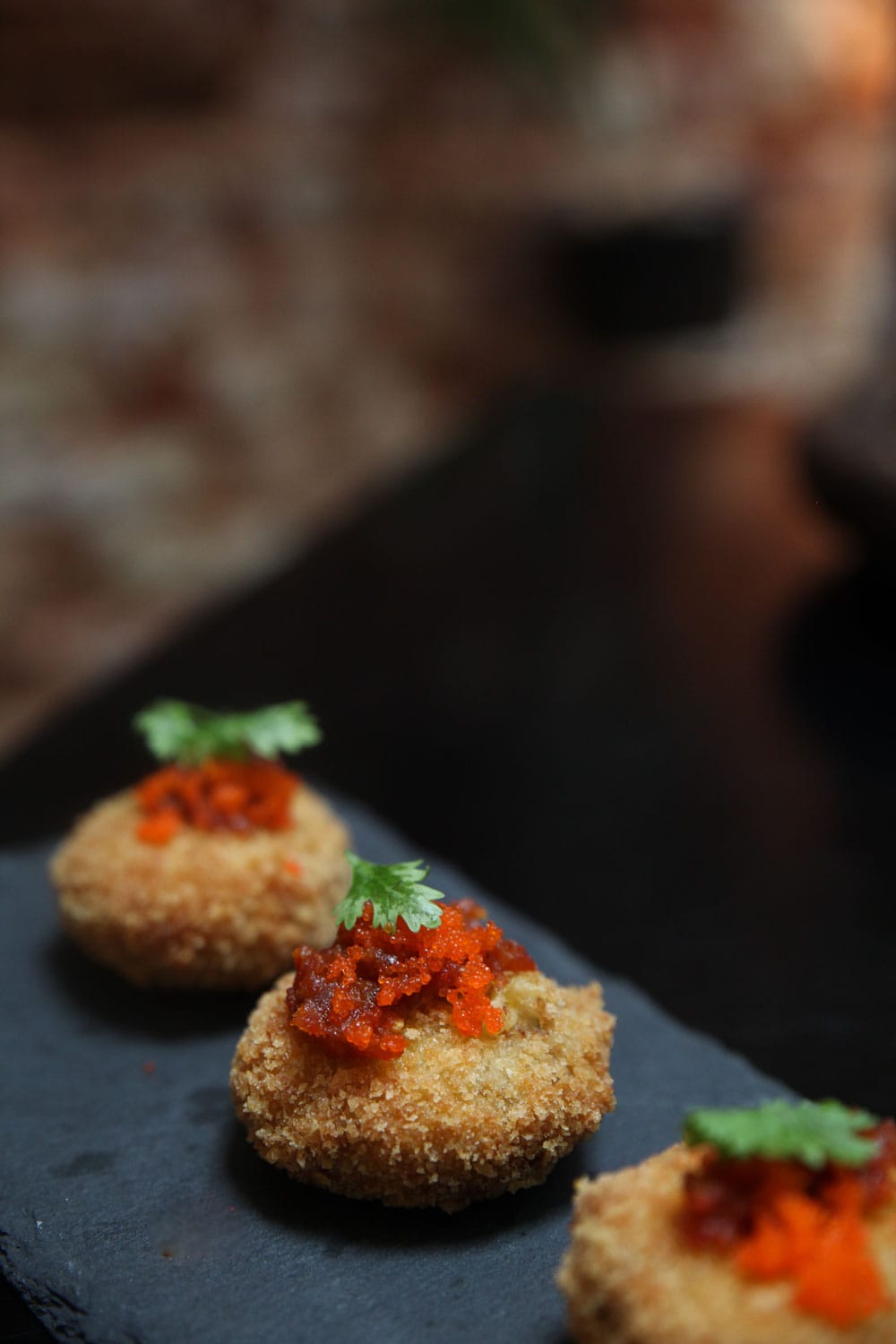 Think of this appetiser as a hybrid of a crabcake and a croquette infused with strong asian flavours. Kaffir-lime leaves, capsicums and shallots are the key elements that made this dish a truly Thai-inspired one. With that satisfying crunch from its crumbly shell topped with homemade tomato chilli jam and ebiko, we were further taken aback by the occasional sweetness emiting from the generous chunks of capsicums. Fried once before baking to get just the right amount of heat in the body that consists of distinct shreds of crabmeat, potato and vegetables, we almost could not resist kissing our fingertips before shouting out a “Buono“.
Pink Risotto $22.00+ 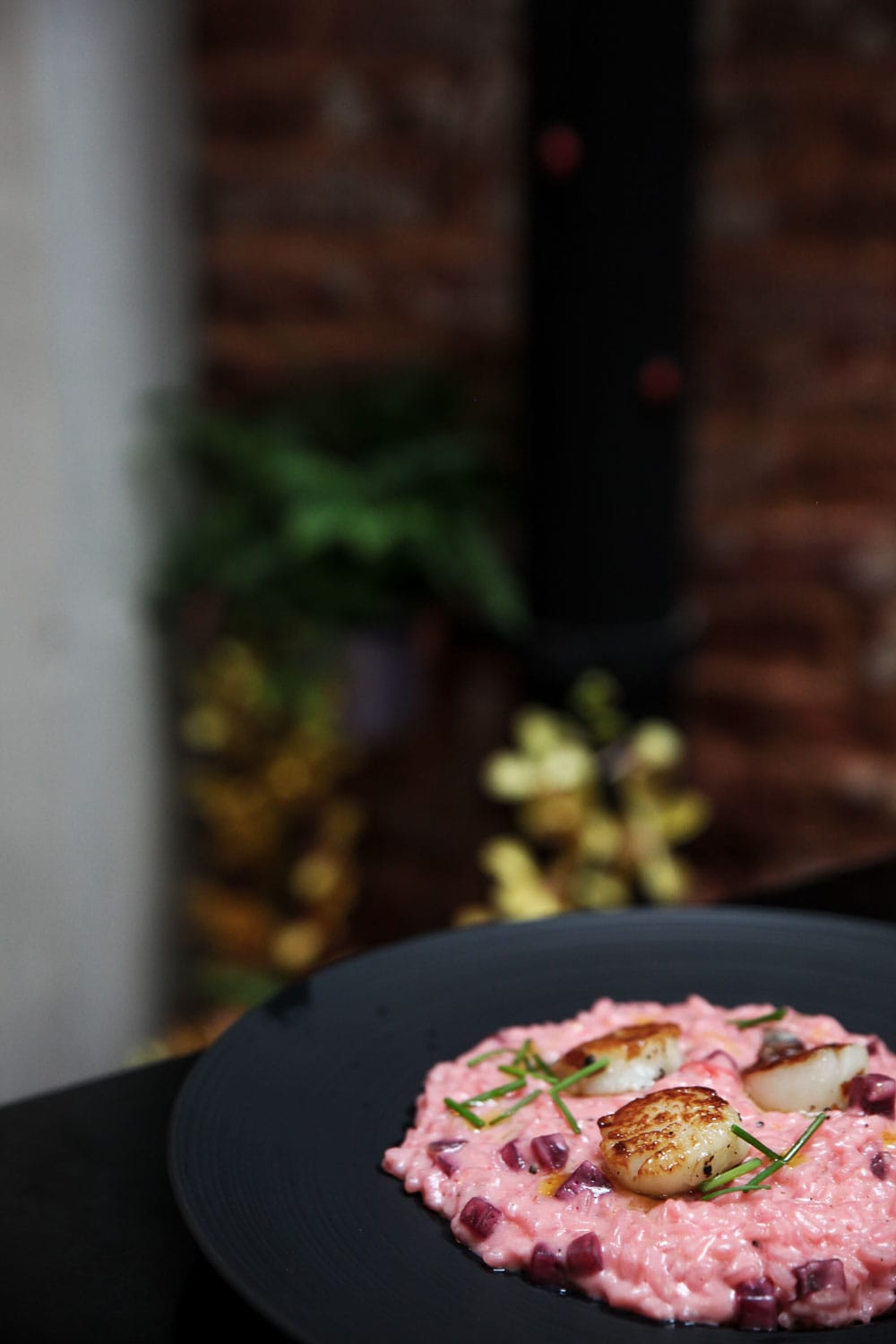 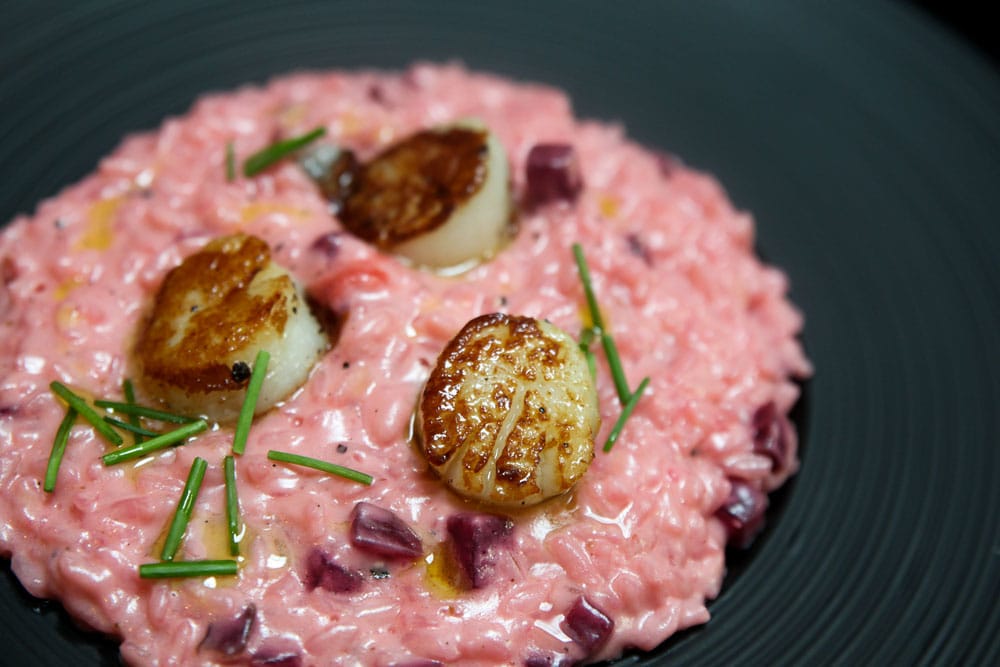 The entrée continues to keep our jaws dropped with its unique pastel pink hue, which the chef cleverly borrowed from the strong colour of beetroot. Together with freshly grated parmigiana cheese, sauteed garlic, butter and drizzles of white wine meticulously mixed in with the base onion flavoured rice, the succulent scallop took this dish to another level. Firm yet not too chewy, the scallops were skillfully charred to an al dente finish.
Anti-fans of beetroot need not worry, as the beetroots were roasted for a good hour to remove the slightly raw taste of this vegetable. The result is a delightful and light plate of firm, creamy risotto with distinct chunks of juicy beetroot cubes – although we thought the chef could be a bit more heavy-handed with the white wine to alleviate this dish further.
Vegetarian options are also available, where the thoughtful chef will substitute with feta and goat cheese to bring about a different convention of strong flavours.
Twilight $12.00+ 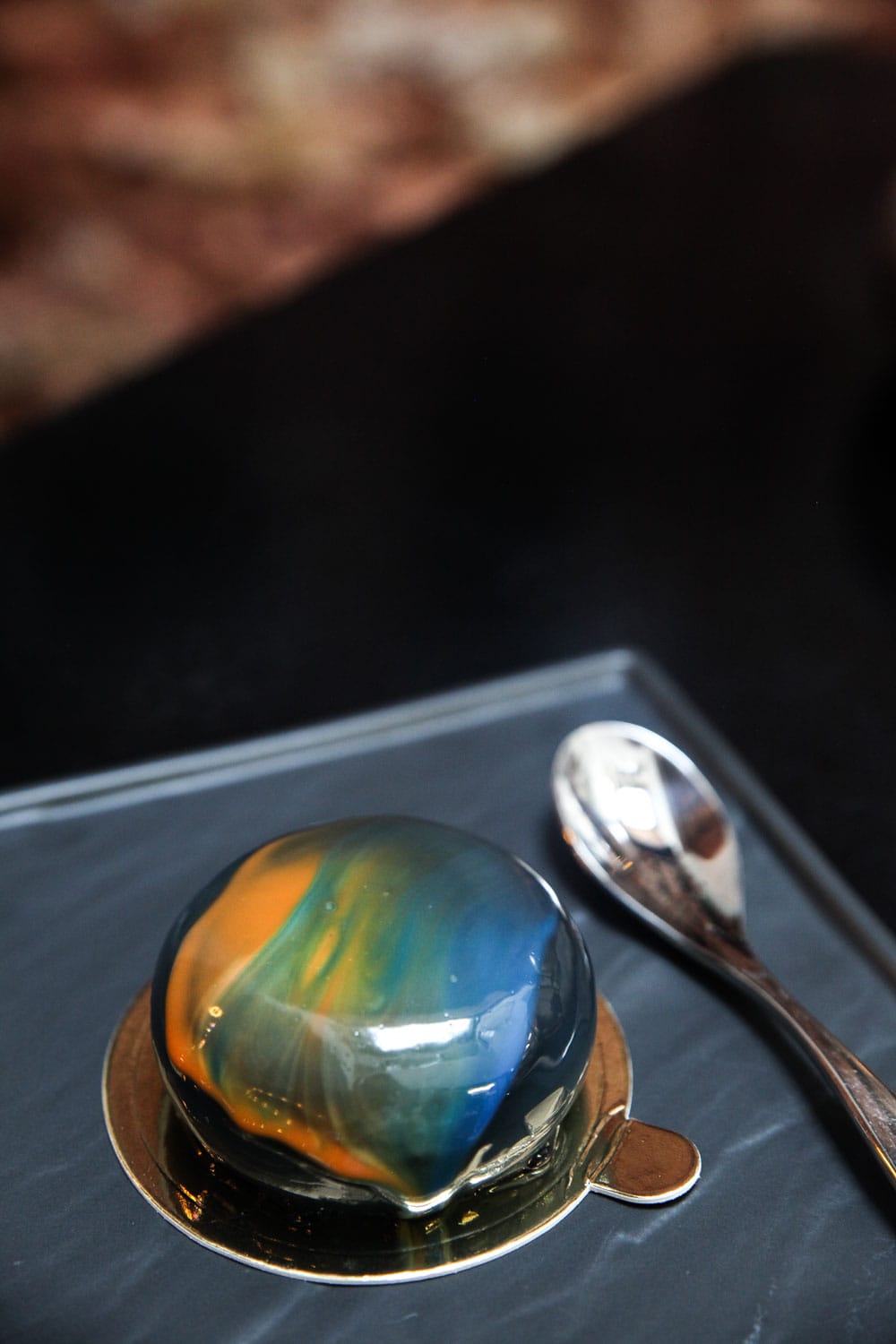 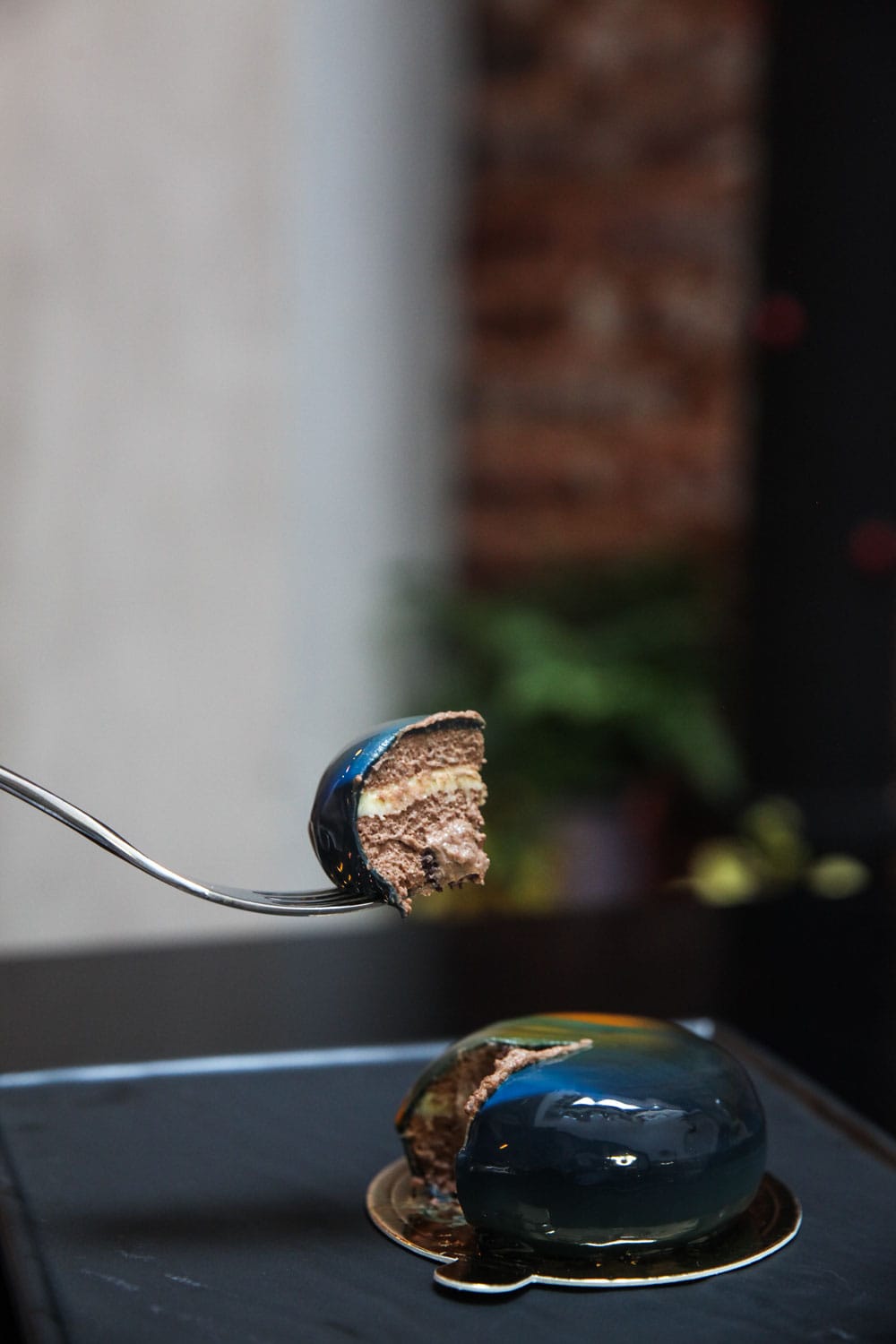 It was almost heart-breaking to cut into this carefully-plated creation of soft chocolate mousse, orange curd and cointreau. Deliberately designed to take a circular shape, it took into account the tender nature of marbling chocolate mousse that will otherwise melt off in shapes with sharp edges.
The tangy orange curd gave a good retreat from the heavier chocolate layers in between spoons of this intricate dessert, while the orange liquor brings up its maturity. Expect your order of Twilight to be uniquely yours, as the dessert chef creates the patterns that greet you according to his mood, torching each and every piece out of instinctive intuition.
Terrarium $12.00+ (additional $3.00 for Rum) 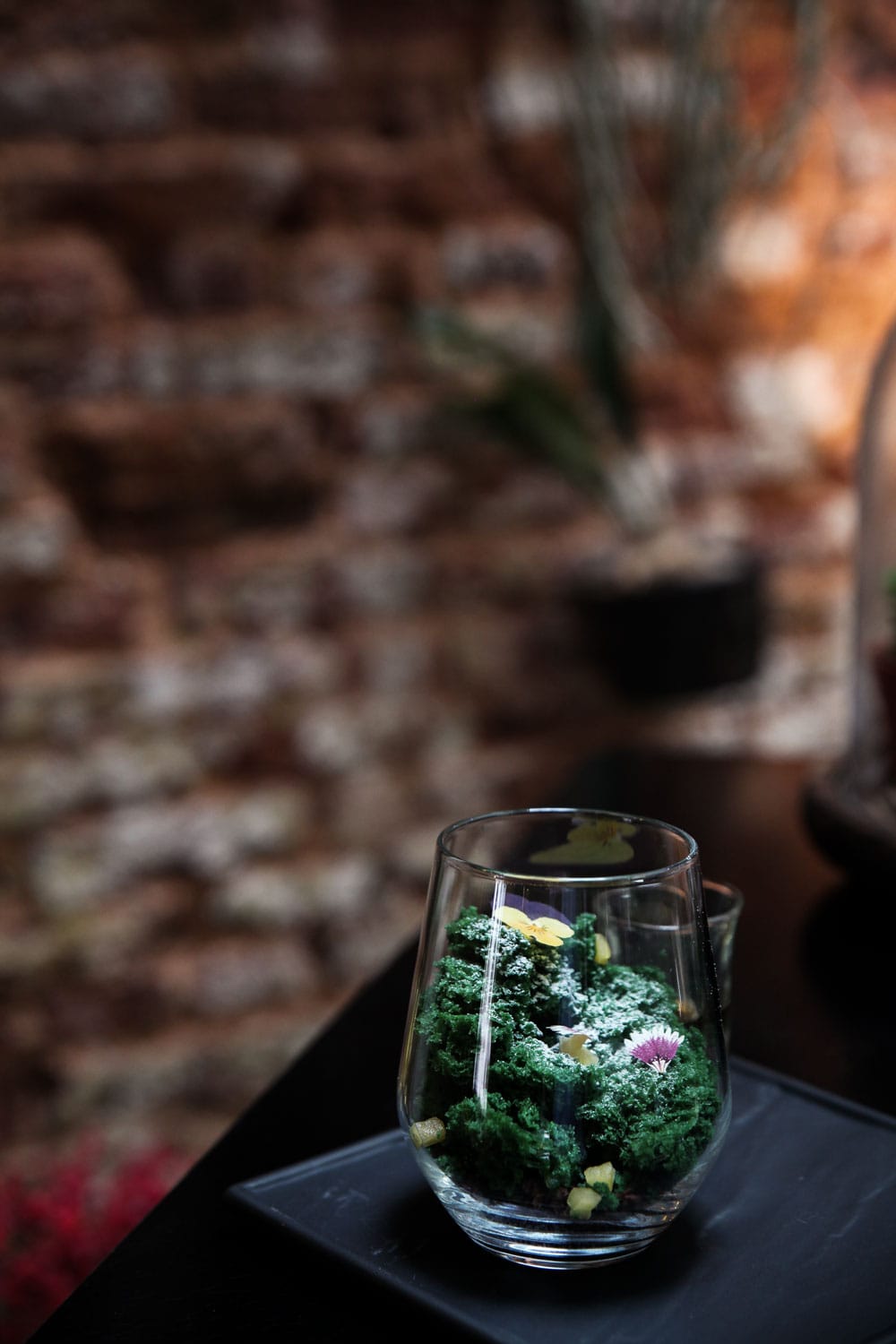 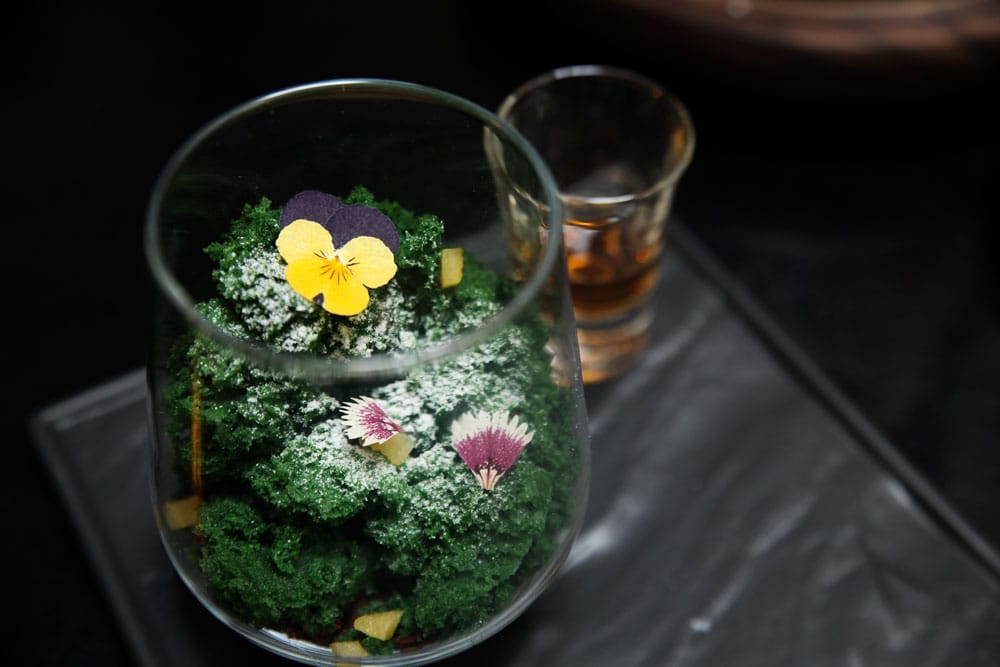 Another almost-too-cruel-to-deconstruct sweet treat, looking scarily similar to the living mini terrarium adjacent to the dish. Made with vanilla-almond sponge, chocolate soil, fresh mint custard and apple compote, it pairs best with a light drizzle of rum.
We appreciate the chunks of cocoa that played a contrasting texture to the fluffy vanilla-almond sponge, but we thought there can be more flavours given the alluring edible flower papers that teased our eyes before our taste buds. Although the rum did gave Terranium more sophiscation, we thought Twilight won our palates by a substantial margin.
As if the guys behind Epiphyte have not exceeded our expectations of a fresh amateur in our F&B scene, they are already making plans to engage non-profit organisations in their attempt to humanise the dining experience – holding true to their promise of engaging human’s fifth sense of touch, emotionally. In time to come, they are looking to utilise the second-storey of their shophouse as an event space for integration between corporate entities and non-profit organisations, which we have to give them credit for such an initiative.
Rounding up the culinary selections they offer – it seems that the savoury dishes seemed to fare better than the desserts, although the latter scores brownie points for its originality and aesthetics appeal. Nevertheless, Epiphyte is a welcomed addition to the stretch of old-meets-new F&B businesses along Neil Road, adding on to an even wide plethora of food options in this rapidly growing district.
Address: 47 Neil Road Singapore 088827
Opening hours: Monday – Thursday 1000 – 2300, Friday – Saturday 1000 – 0100
Contact: +65 9451 8873
Email: contact@epiphyte.sg
Facebook
Instagram