https://www.youtube.com/watch?v=90nqro07WVE&feature=youtu.be
Having awarded the Michelin Star for 3 consecutive years (2015, 2016, 2017) for the Michelin Guide for Hong Kong & Macau, Mr Hardy Kam – founder and director of Kam’s Roast Goose Hong Kong is proud of his renowned restaurant, even though just slightly more than 2 years since its operation in Wan Chai in 2014. 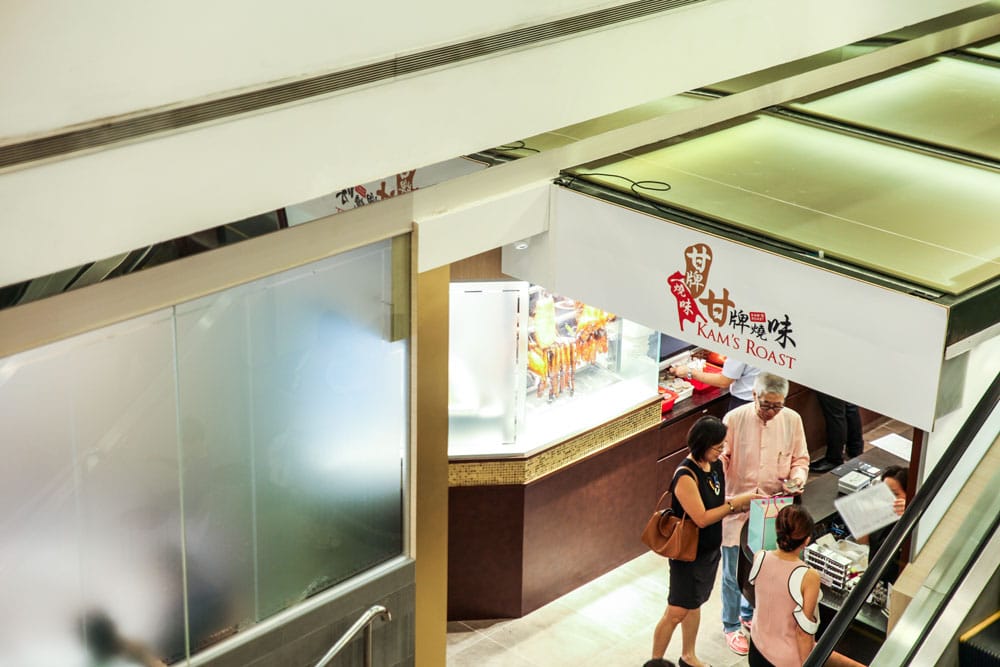 Mr Kam is the 3rd generation of the internationally acclaimed Yung Kee Restaurant, where he previously spent a good 10 years in his younger days in Yung Kee, learning the ropes in the kitchen. Lo and behold – just 4 months into the opening of his own venture into Kam’s Roast, the said restaurant earned a prestigious Michelin Star. Despite a huge shift from a modest household brand to a well-recognised restaurant, Mr Kam chose to keep his 36-seater stall small, as a tribute to his grandfather and father, whose business began as a humble entity 75 years ago. We definitely sensed his filial piety and earnesty during our short conversation. (Mr Kam’s interview) 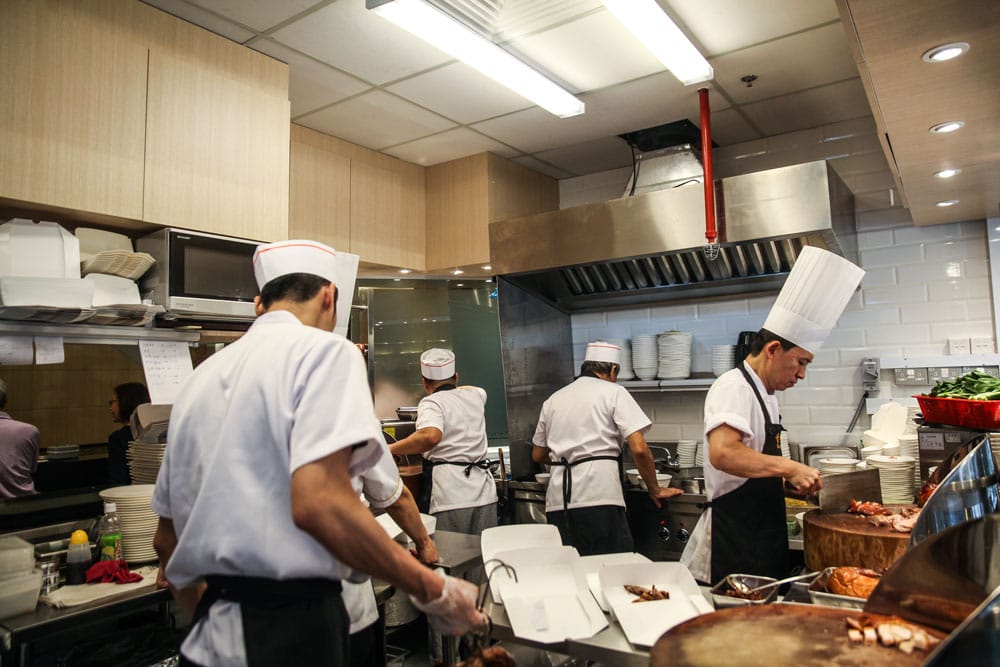 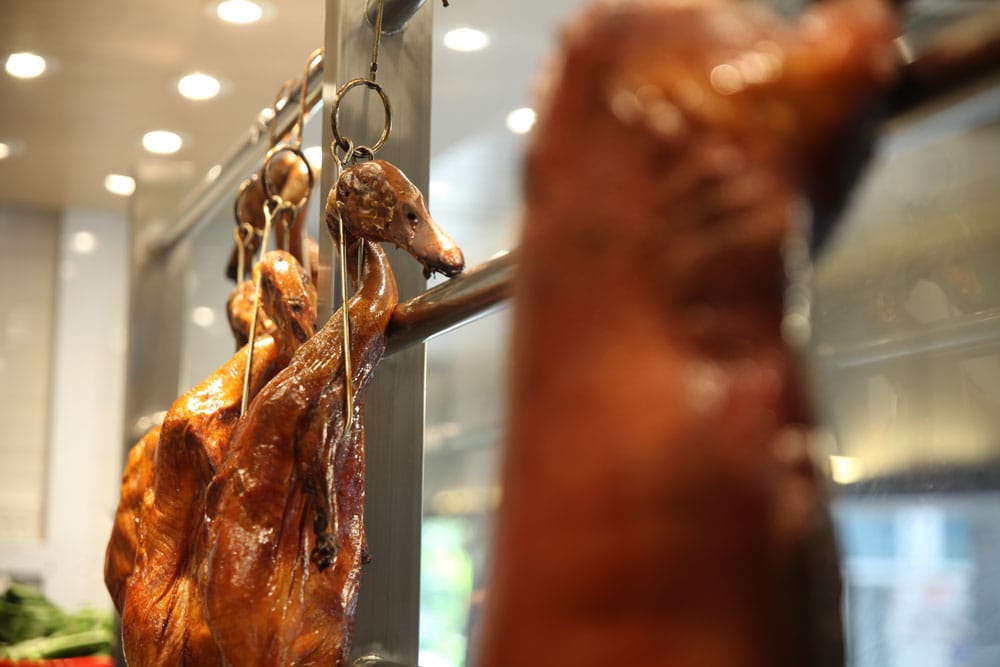 It is when Mr Robert Chua, the current executive director of Kam’s Roast Singapore, who tried their meat platter in Wan Chai where he named it the best roast goose in Hong Kong and couldn’t look back. The same man who brought in Tim Ho Wan and Tsuta Singapore, Mr Chua convinced Mr Kam to bring in Kam’s Roast into our shores, where the rest is now history. 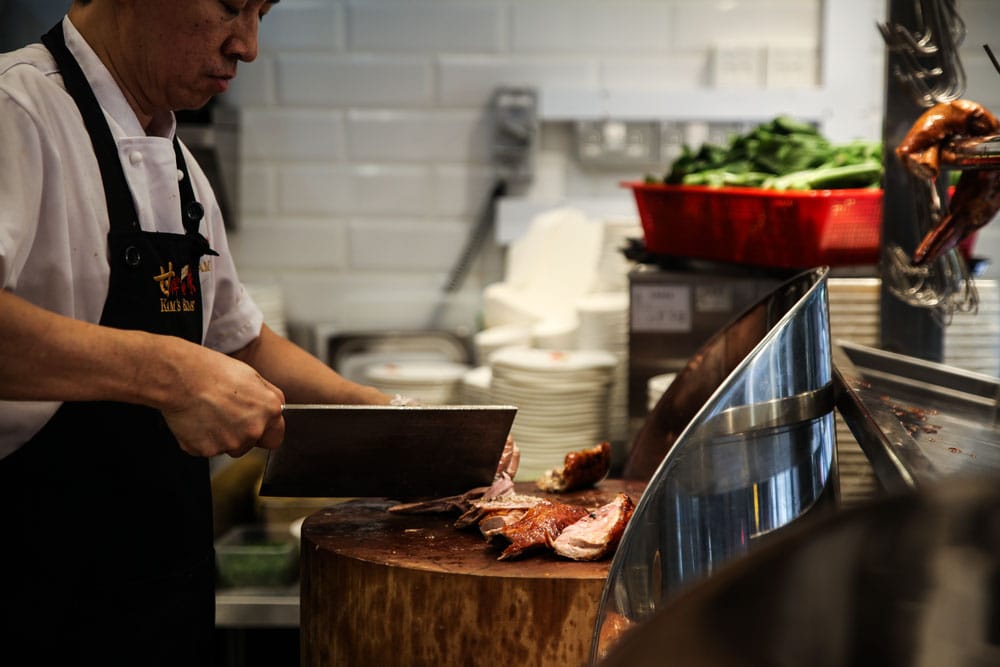 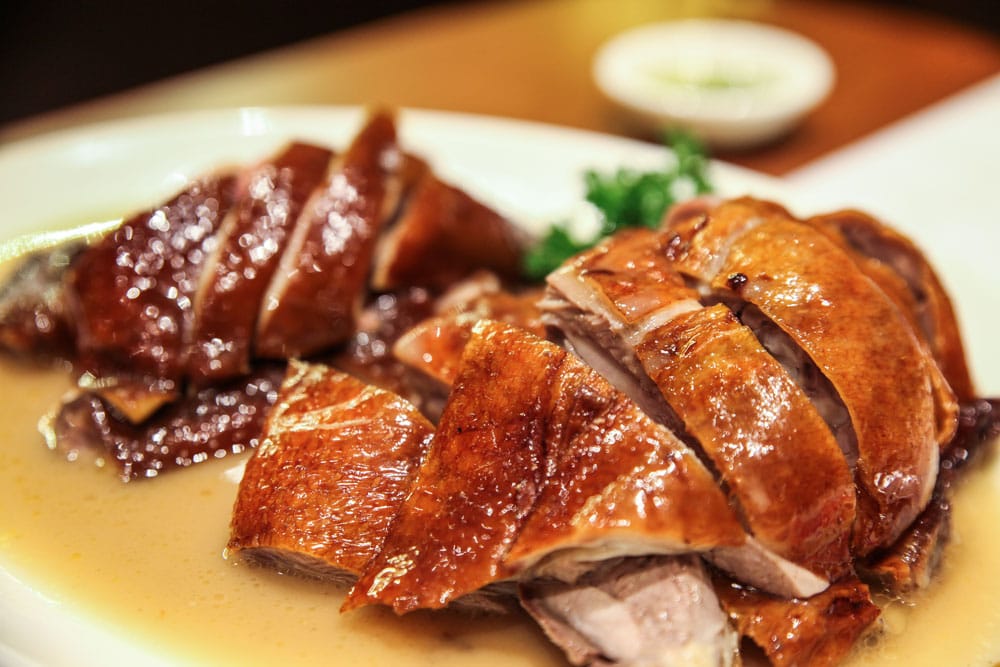 A step into the restaurant at Pacific Plaza will inevitably bring about a huge surge of reminiscence to an authentic Hong Kong restaurant – brightly-lit, half-mirrors lined up on the sides, complementing the wooden tables and chairs in their neutral tones. Separated just by a glass window, you can view the skillful chefs in action right from the entrance. The clinking from the chinese cutleries seemed to form a welcoming melody, while a whiff of the roasting meat will have you anticipate your order on the table. A portrait of a family bonding over a meal is drawn up against the wall, where it portrays Mr Kam’s emphasis on quality bonding over good food.
Marinated Cucumber with Vinegar & Garlic $6.80++ 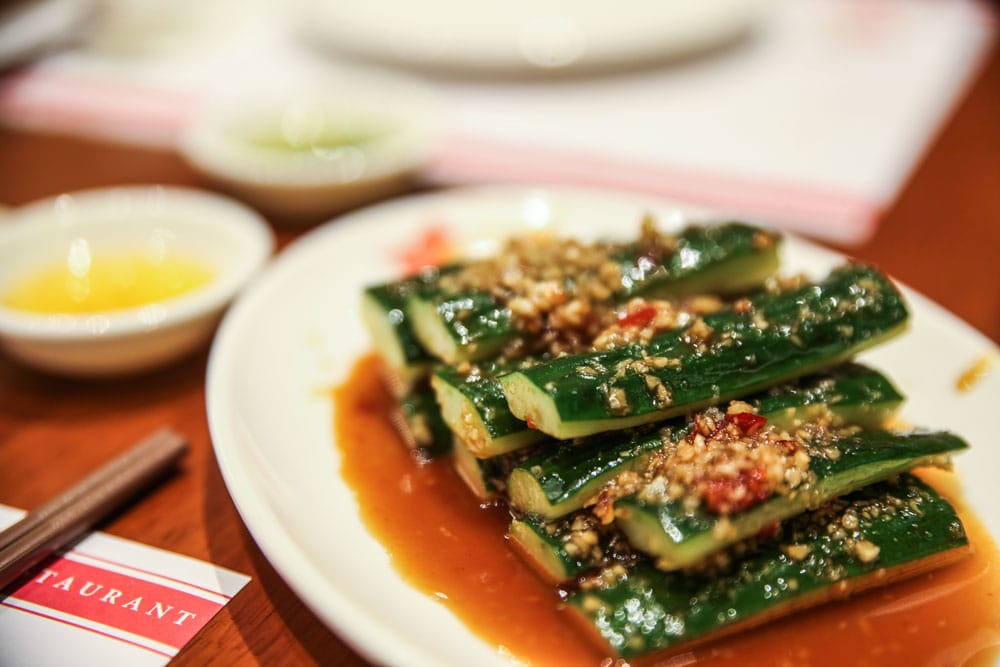 Absolutely juicy, there is a crunch with every bite. The vinegar, garlic and chilli gave an added layer of kick to the refreshing appetizer. The flavours on this dish deviate towards the stronger palates, with both potence from the spice and generally being on the saltier side.
Roast Duck $55.00++ / Soya Chicken $34.80++ (whole portions) 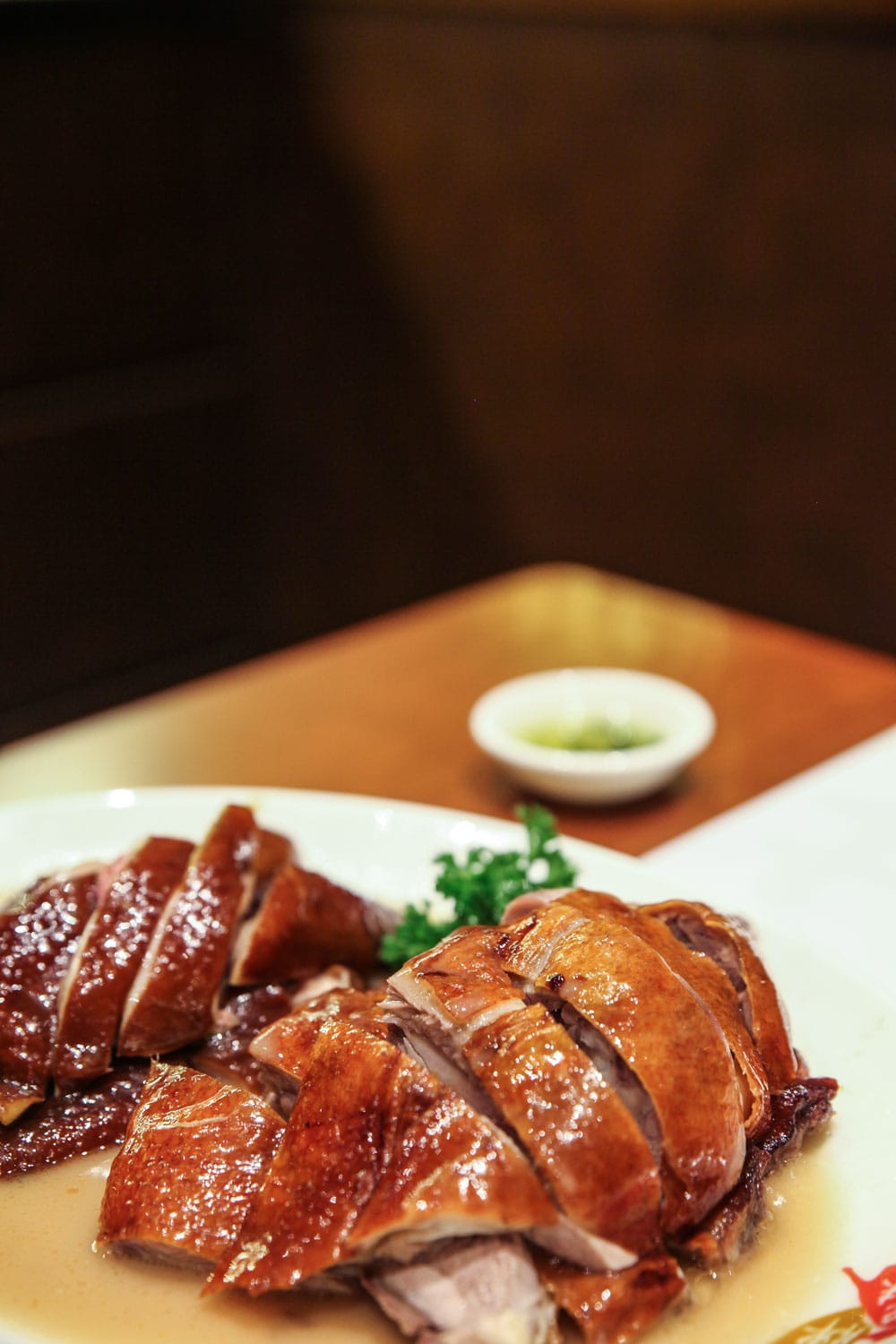 Due to AVA regulations, Mr Kam is not able to bring in their signature roast goose with their current vendor. Hence, staying true to their belief in providing consistent and tasty offerings, Mr Kam has prepared the best quality duck using the same recipe from the roast goose. The process involved 30 over taste tests flown to and fro its Hong Kong flagship shop with our local duck, before eventually attaining almost an identical taste to their signature goose.
Both the efforts behind the birth of the roast duck and its taste are commendable. Succulent and flavourful, the crisp skin falls off the meat with minimal pull. Together with the herb sauce it was sitted on, it almost does not require the citrusy-sweet accompanying dip to further alleviate the entire enjoyment of this dish.
The Soya Chicken is an obvious favourite among the Shout Team – the meat is firm and tender, and when paired with its fragrant garlic ginger sauce, it went up to another level-playing field. With almost all the sauces at Kam’s Roast having a 70 years old recipe, it is no wonder the sauce can exude a mild spice that can effectively bring out the sweetness from the chicken.
Roast Suckling Pig $34.80++ / Crispy Roast Pork $14.80++ (per portion) 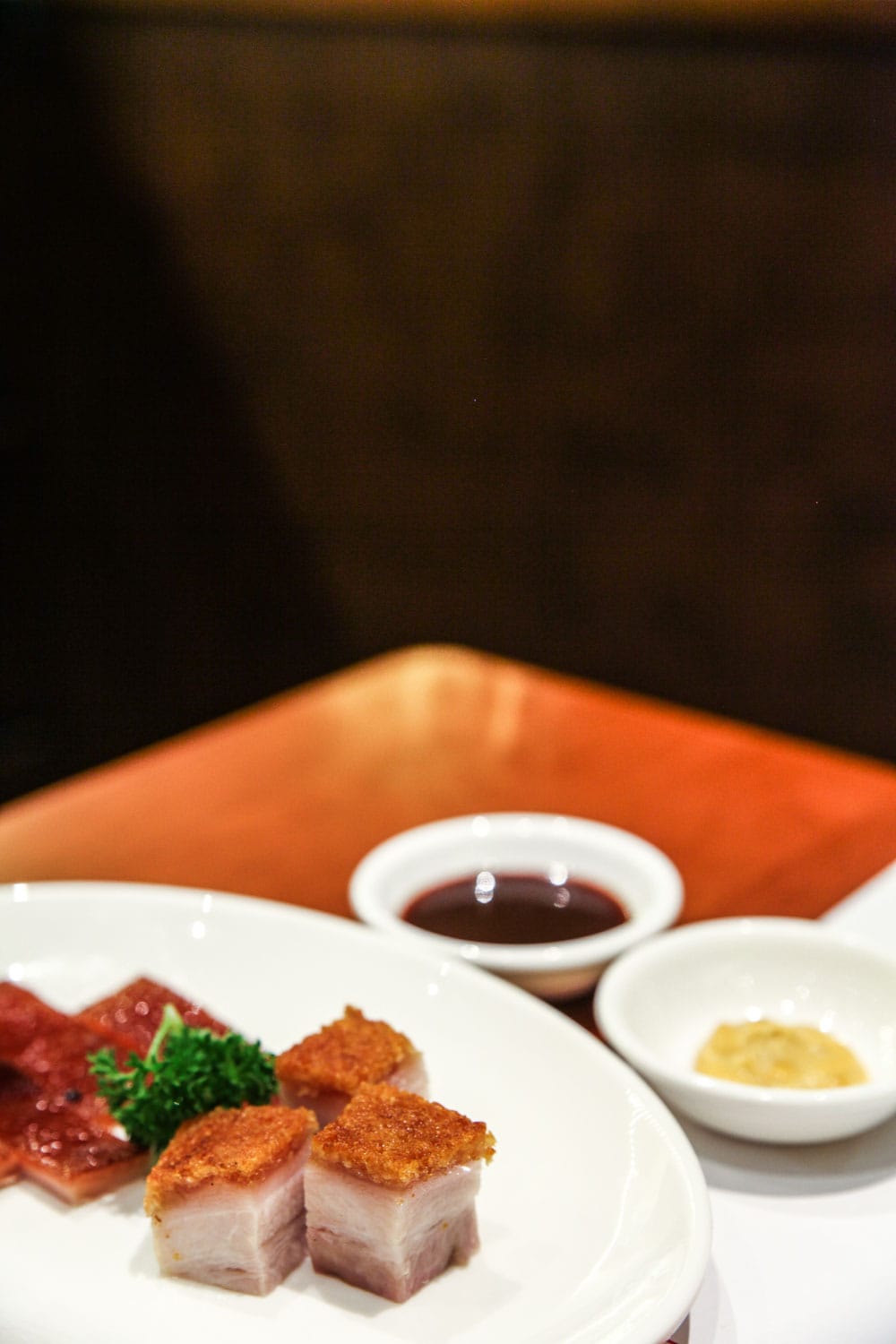 To describe the crackling as just “crispy” would be an understatement to how easily it breaks off into two. Roasted gently for long hours, the collagen produced from the meat is promised to deliver. Indeed, with just the right amount of fats underneath, this is definitely a satisfying indulgence. Rarely served in typical restaurants, the aroma and crunch were not just addictive – but makes one treasure each and every piece.
The Crispy Roast Pork stand on par with the above mentioned in terms of its crispiness, with the meat being slightly less salty than those we were usually served in restaurants. The three distinct layers balanced out one another – the smooth, translucent fatty layer was beautifully sandwiched between its crispy neighbour and the meat which gave the perfect chew. The pairing with the mustard sauce was extremely subjective – some prefer how it goes with the mustard, while the others prefer to savour it on its own.
BBQ Pork $14.80++ / “Toro” Char Siu $22.80++ (per portion) 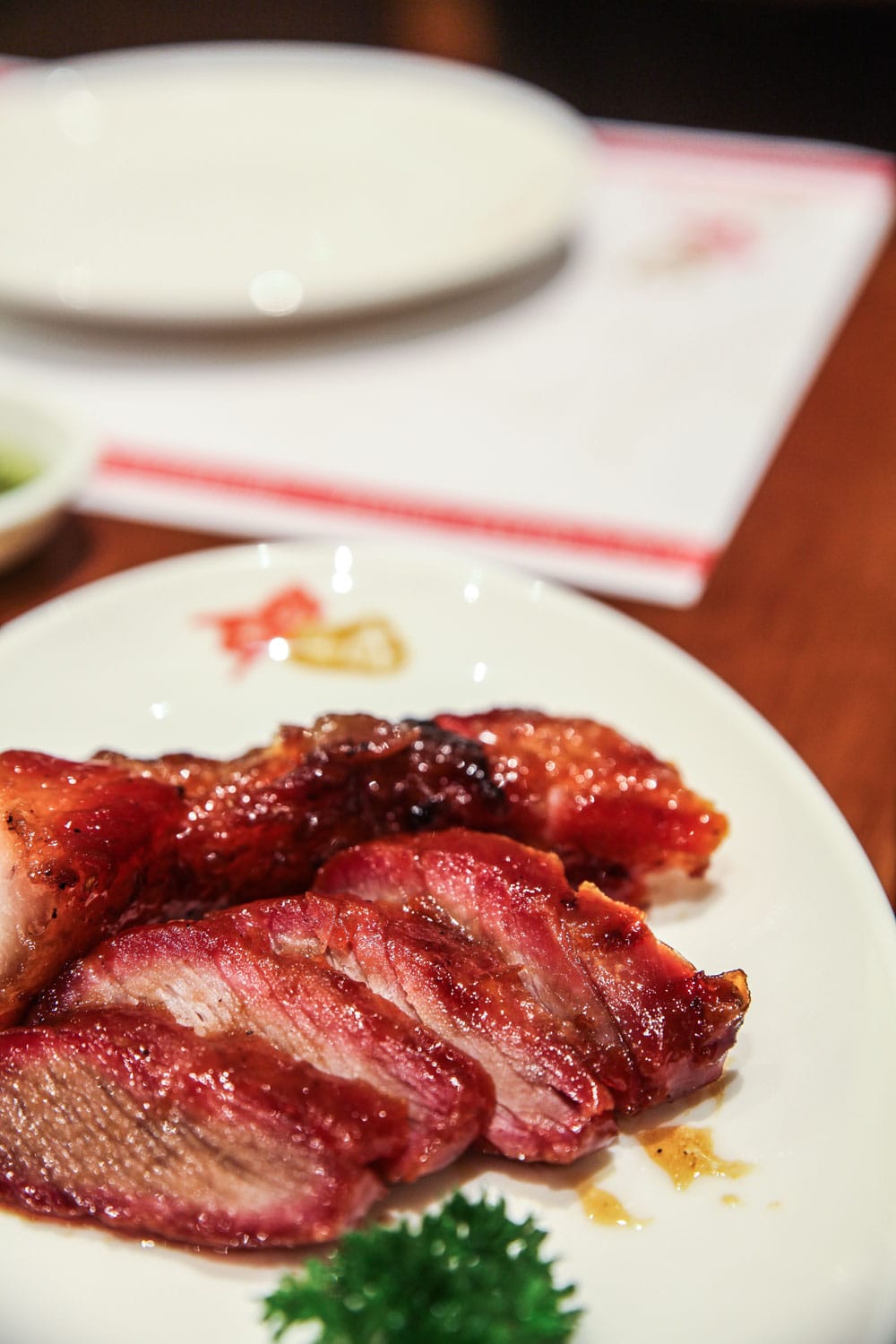 We were told to taste the BBQ Pork before the “Toro” Char Siu even though both meat were reflective of sublime goodness the moment they were presented. The former is a lean cut of pork, with distinct layer of meat. The gradient that transits from its greyish-brown middle followed by a dark pink hue before reaching its red, sweet marinated skin is evident of how much effort has gone into cleaning, marinating and roasting the meat. With bits of burnt char on the outer layer, it was one delightful by-product of the long roasting process. 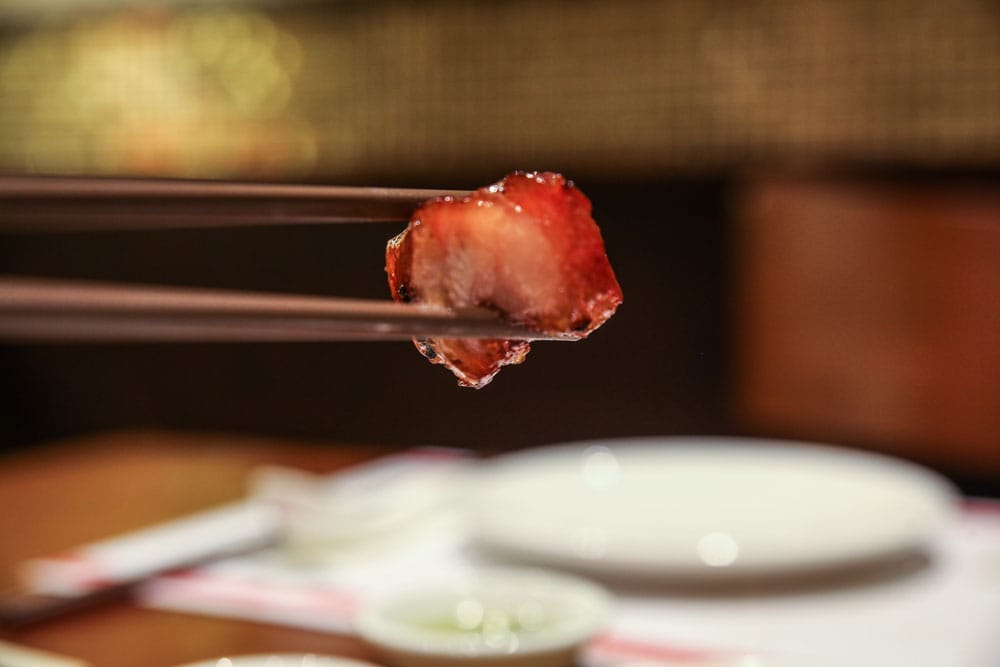 “Toro”, which implies the fattiest, best cut in Japanese is aptly named to represent another signature meat dish that is both Mr Kam’s and Mr Chua’s personal favourite. Using the same technique but differing heat control as the way they prepared the BBQ pork, the premium pork belly is handled with a recipe passed down by Mr Kam’s Father, the second generation owner at the famed Yung Kee Restaurant. The first mouth is the money bite – the melt-in-your-mouth pork belly has a mind-blowing char that boost a smoky flavour. Only 4 – 5 portions of this dish can be made per pig, which adds on to its exclusivity.
Braised Noodle with Ginger Scallion $6.80++ 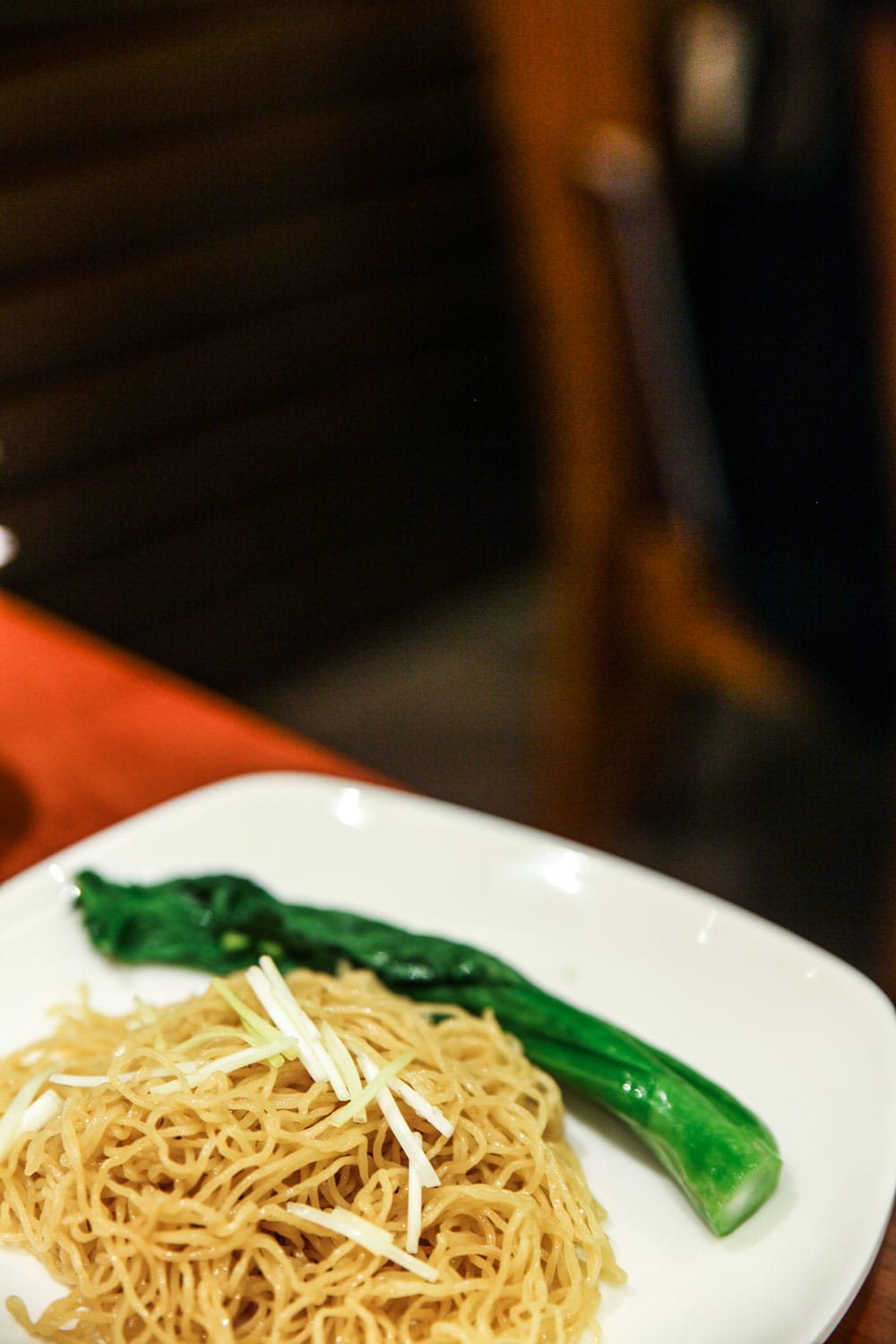 This is no ordinary plate of noodles – flown in daily from Hong Kong via Singapore Airlines, these are the legendary wonton noodles served in Yung Kee, which is exclusively available in Singapore. Springy and firm to the bite down to the last strand, the noodles are thin, distinct strands of eggy goodness. We can safely say Kam’s Roast rendition of hong kong noodles is the only unique, if not one of the most unique version of this staple food in Singapore.
Red Bean Soup with Aged Orange Peel $5.80++ 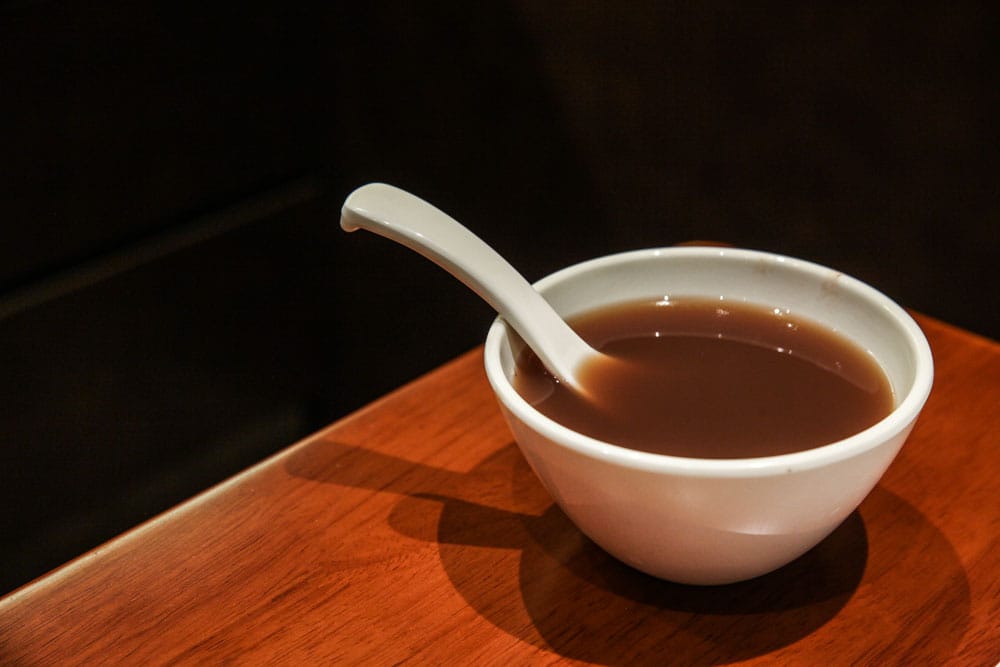 Even when it comes to desserts, Kam’s Roast will not take the back seat. Using only orange peel that has been aged for decades to bring out their aroma, it illuminates the star factor of this nutritious dessert. Slightly sweet with a rejuvenating after-taste of vitamin C, this dessert made only with top-grade red beans ended our meaty affair on a candy-coated finish.