Two Michelin starred Japanese Omakase Sushi Restaurant, Shoukouwa. While it sounds incredibly luxurious and exquisite, what exactly is served was unknown to me. It was only upon researching where it is mentioned that Shoukouwa prides itself for its fine cuisine standards and freshest seasonal produce. They also specialised in serving Omakase-styled course menus where you leave it to the master chefs to choose what to serve based of the available seasonal ingredients. As such, the menu is subjected to each day’s freshest seasonal produce availability. It is also a personalized experience where can adjust the menu to suit your own dietary requirements.
Impressive, yes. At this point I was already looking forward to trying such quality Japanese cuisine and was curious about how the experience would be like. Going in with an excited heart and an awaiting stomach, I was all ready to soak up the Michelin starred Omakase experience firsthand. 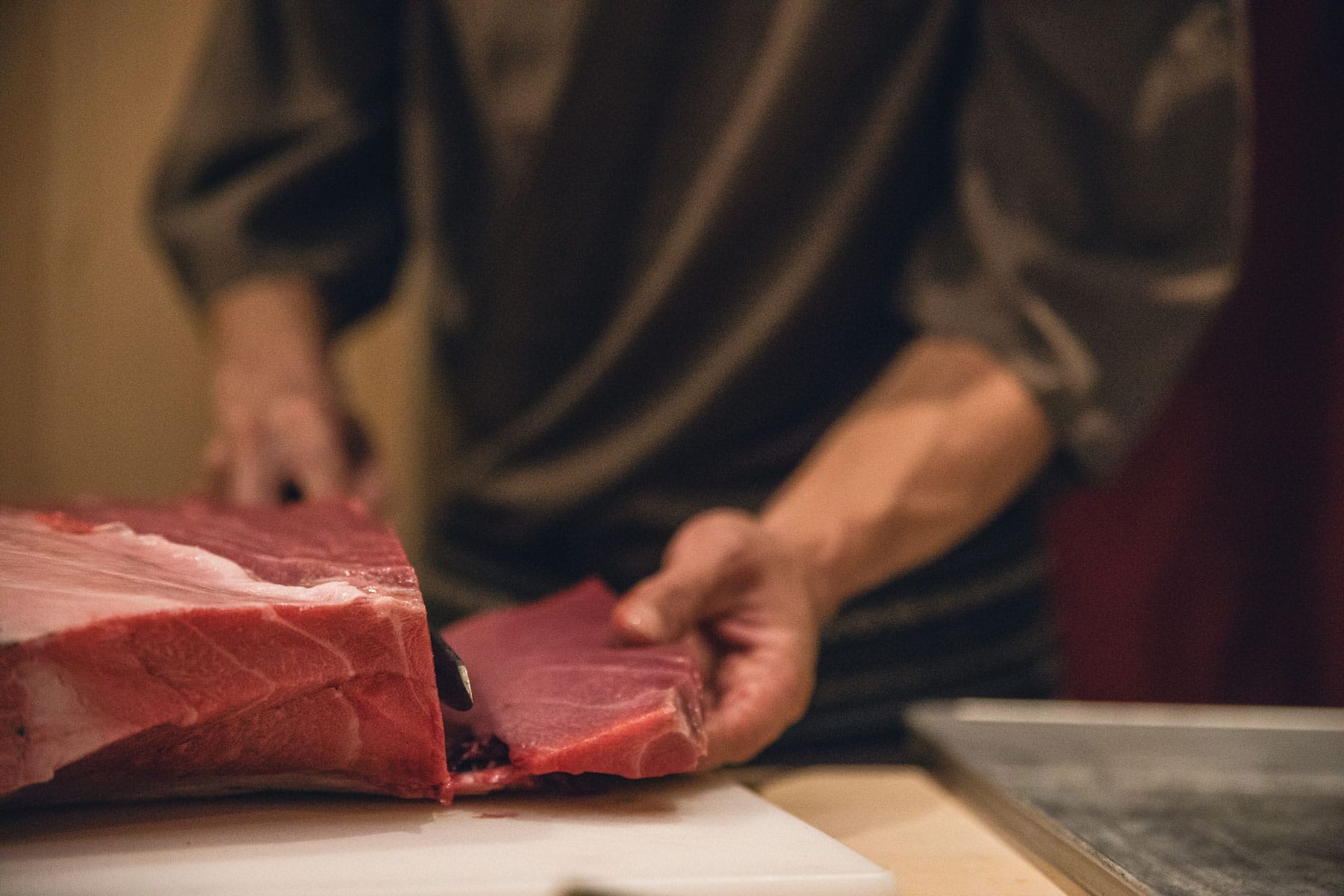 Entering with the expectation of seeing a large grand restaurant, it was unexpected to see that the wood-toned minimalistic restaurant was of a small intimate setting that served only a maximum of 8 individuals at any one time, as well as a private room with 6 seats. Despite the small enclosed space, it had a very intimate and personal atmosphere where one could really slow down and enjoy / savour what Shoukouwa had to offer without rushing through. Especially when a full Omakase course usually takes a minimum of 2 hours to finish, the comforting ambience of the space made me feel welcomed to sit back, relax, and enjoy the experience. 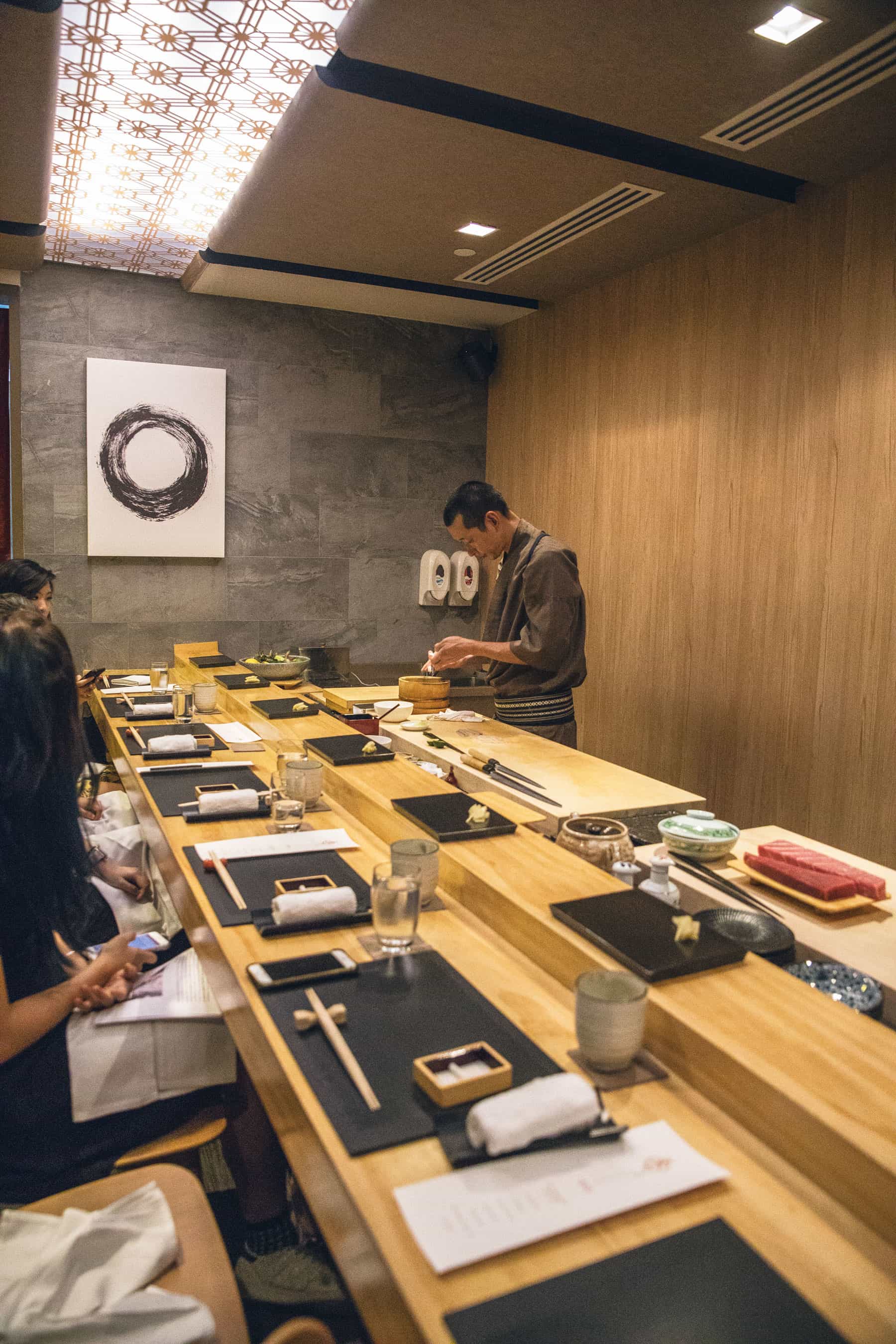 The lunch menu we had was the 16-course menu that is specially curated for Gastromonth 2017, which includes the starter that compromises of an appetizer and sashimi, followed by the main course that is made up of cooked dishes, nigiri sushi, miso soup and Japanese omelette, before ending with dessert. 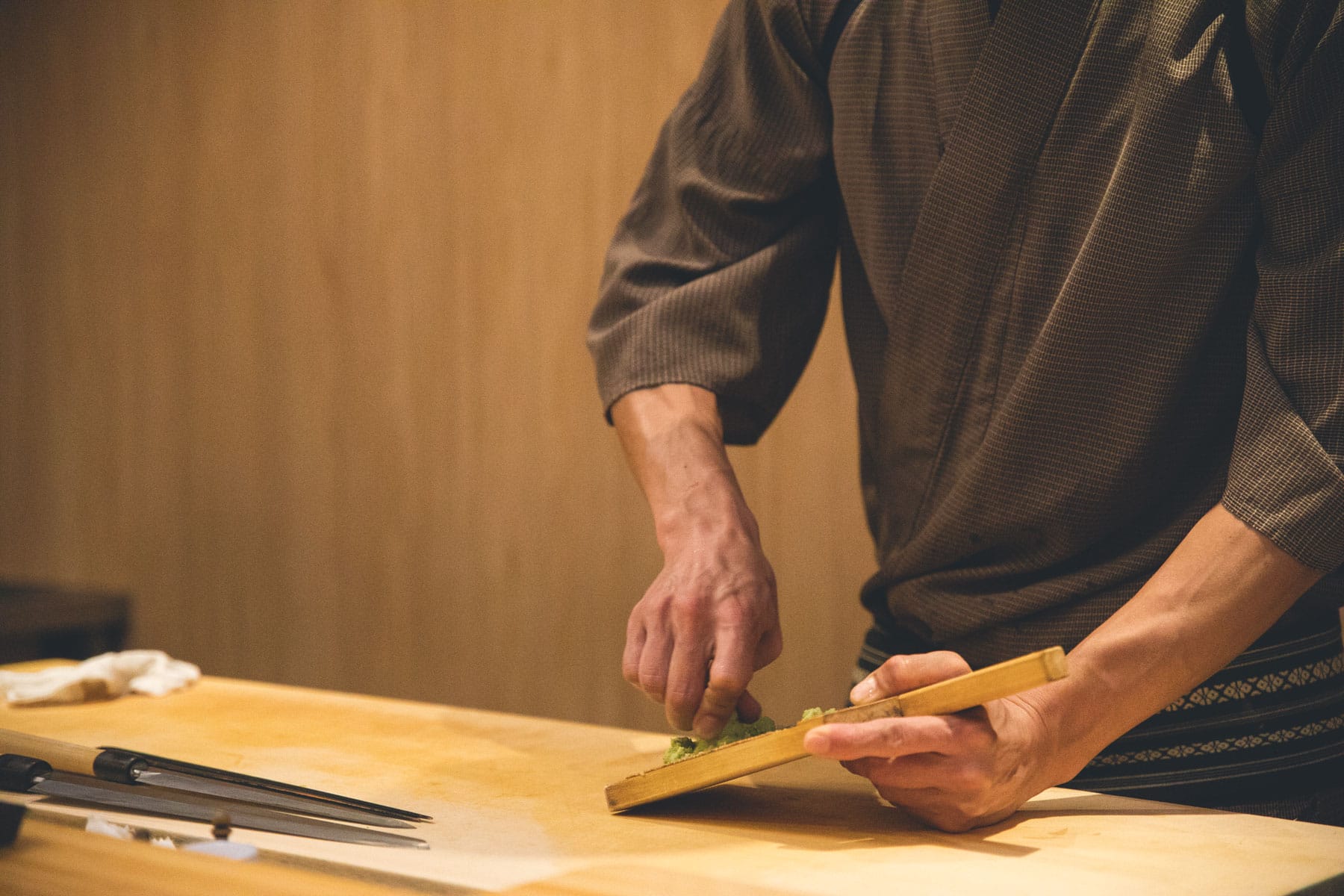 Chef Sakuta then greeted us first prior to freshly grating the wasabi root to be used in the dishes. While preparing he also emphasized how every small detail mattered and was paid much attention to. Every ingredient, even down to the salt, pepper and rice used, are imported directly from Japan!
For the appetizer, scallop from Hokkaido and baby sardine from Shizuoka were served together with spinach and young corn to create Ohitashi, a naturally sweet and light refreshing starter. 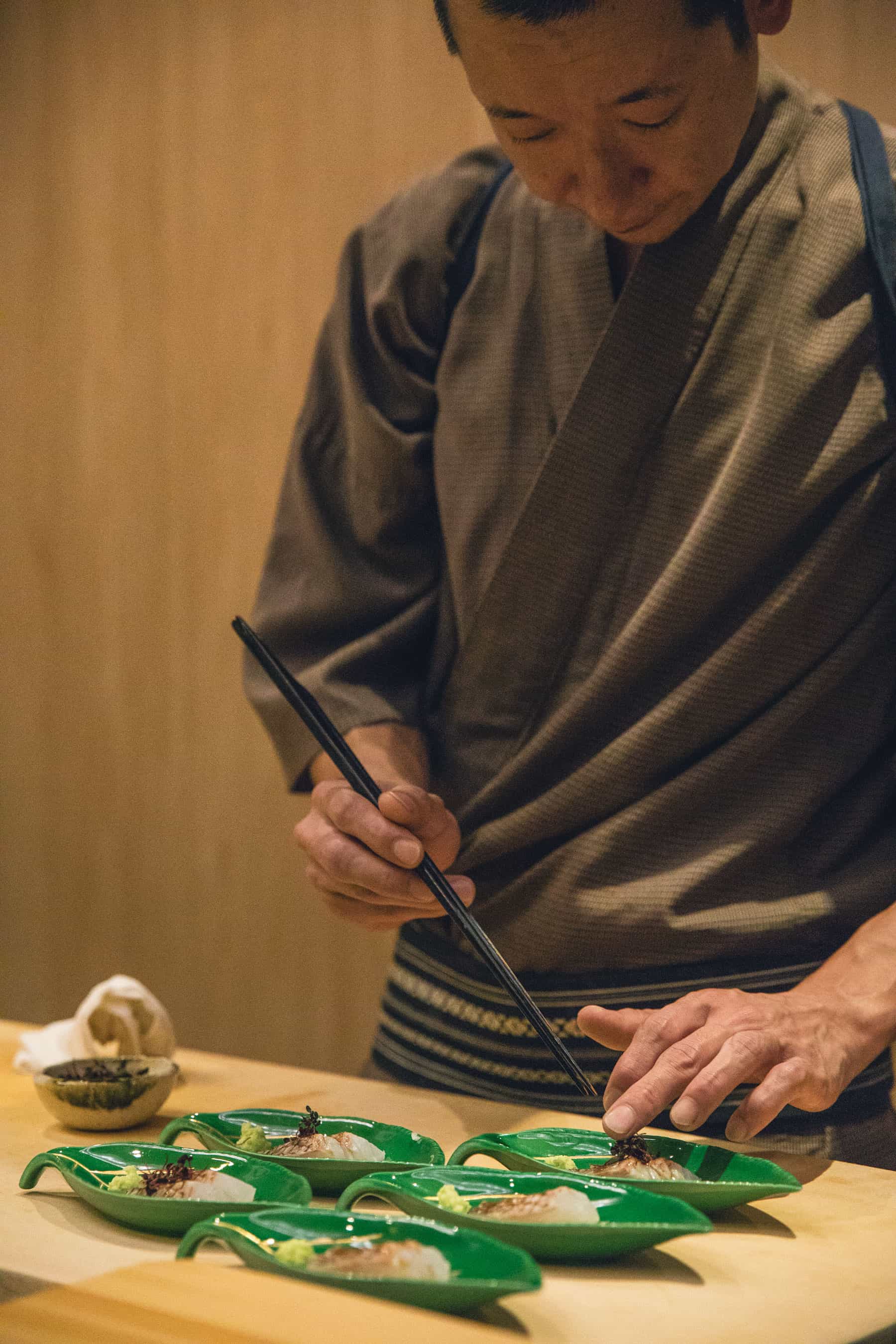 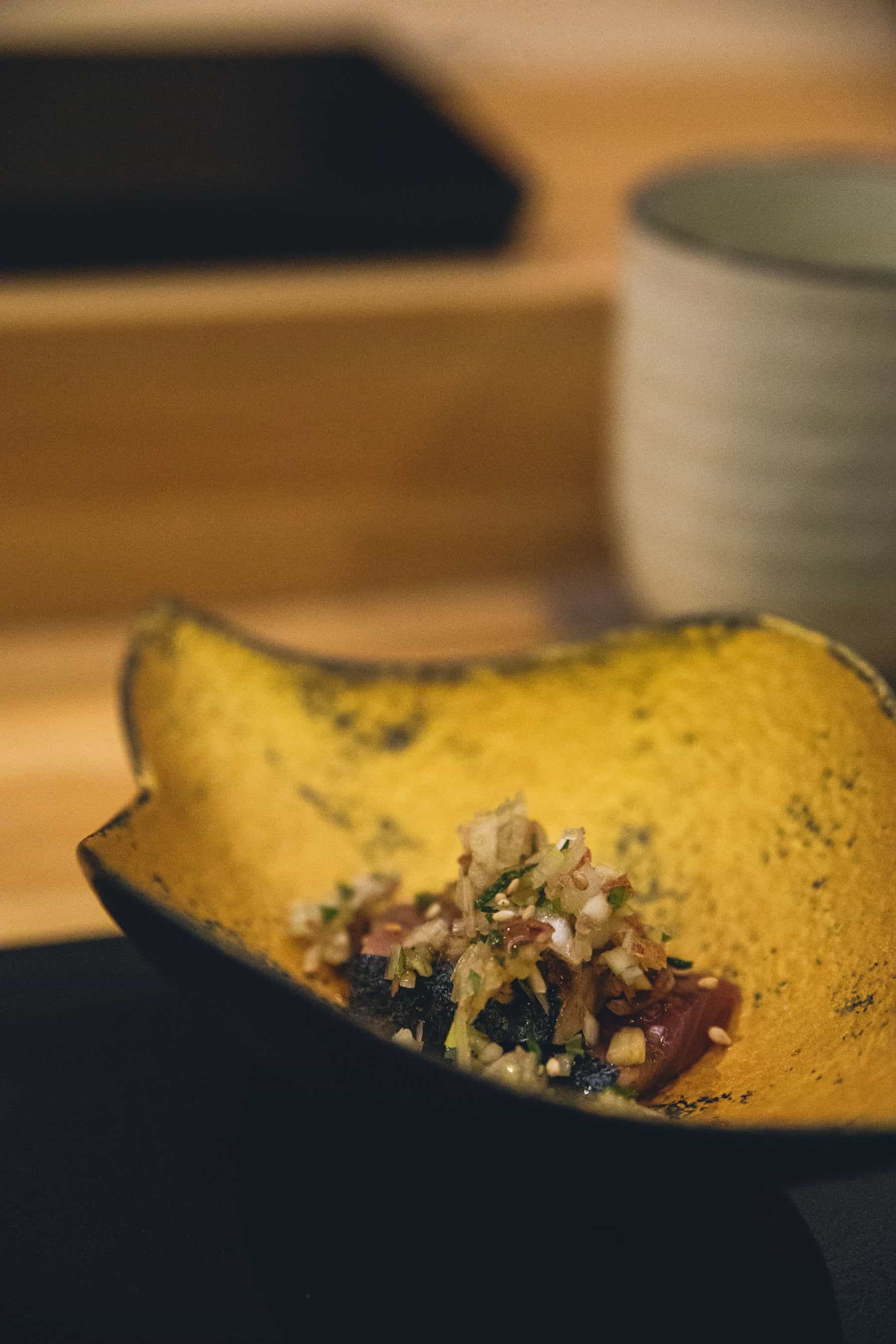 While the appetizer was being brought out, Chef began to start prepping the sashimi to be served from the next few courses. The first two prepared were Tai – Seabream, sashimi from Akashi, and the Smoked Katsuo – Bonito from Nagasaki. Chef then went on to share how at Shoukouwa, only the finest and freshest of the season is served and further explained how each ingredient comes from the city that is predominantly known for that particular produce in order to get the best of what Japan has to offer. To make sure they get the utmost freshest produce, ingredients are flown in daily each morning from Tokyo’s Tsukiji Market – caught on the very same day in the wee hours of the morning!
While Chef was sharing with us, the first dish of the main course was served, Kegani – steamed hairy crab, air flown from Hokkaido, with shark’s fin. Well actually, I did not notice the shark’s fin in the dish when it was served, as this was the first time I had seen it not in a soup form like how it usually is in Chinese restaurants. It was only upon tasting it then did I notice the fibrous texture that was not familiar to crab. It was really interesting to see how two ingredients, typically known to come from two different cuisines could be combined and complement each other so well. 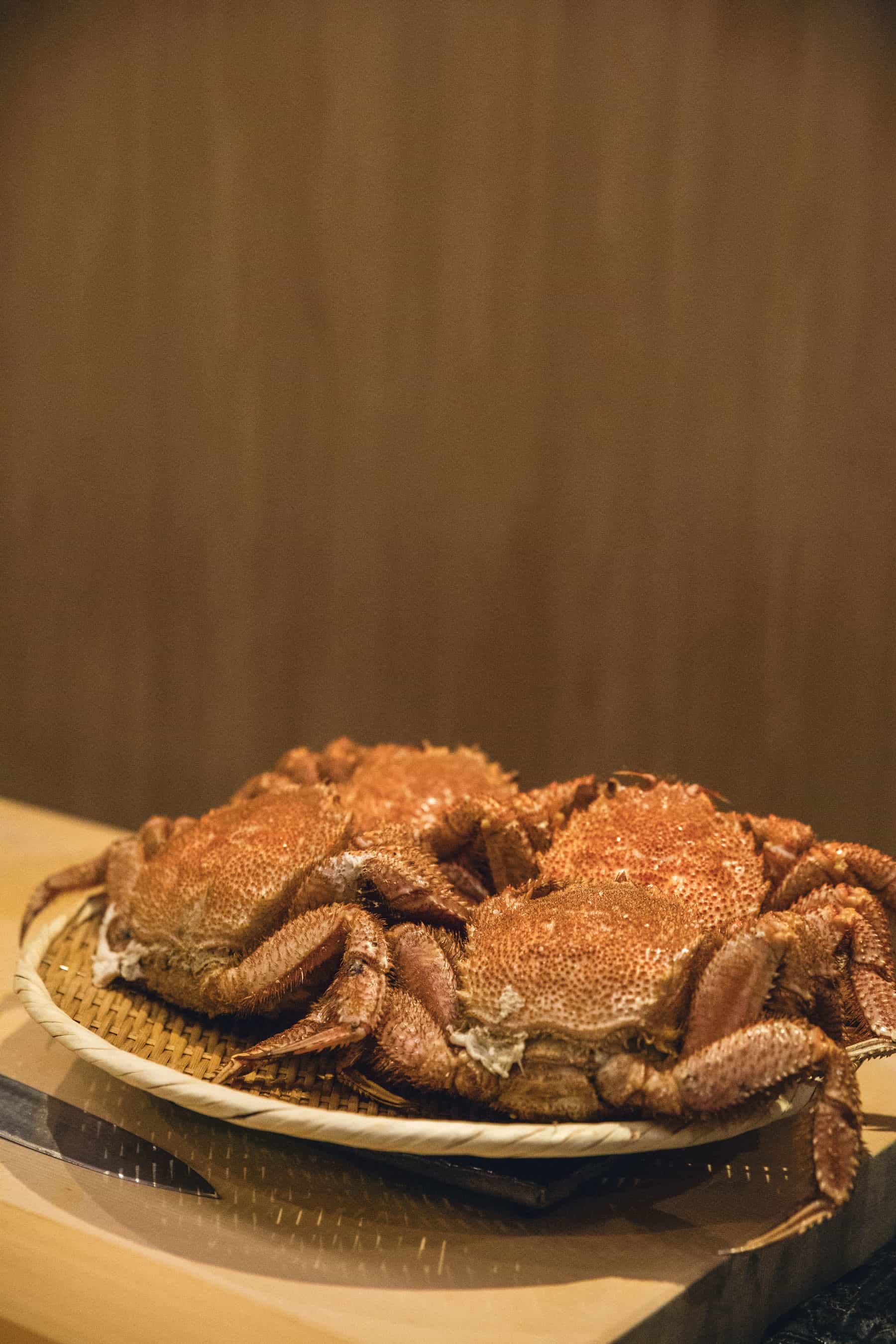 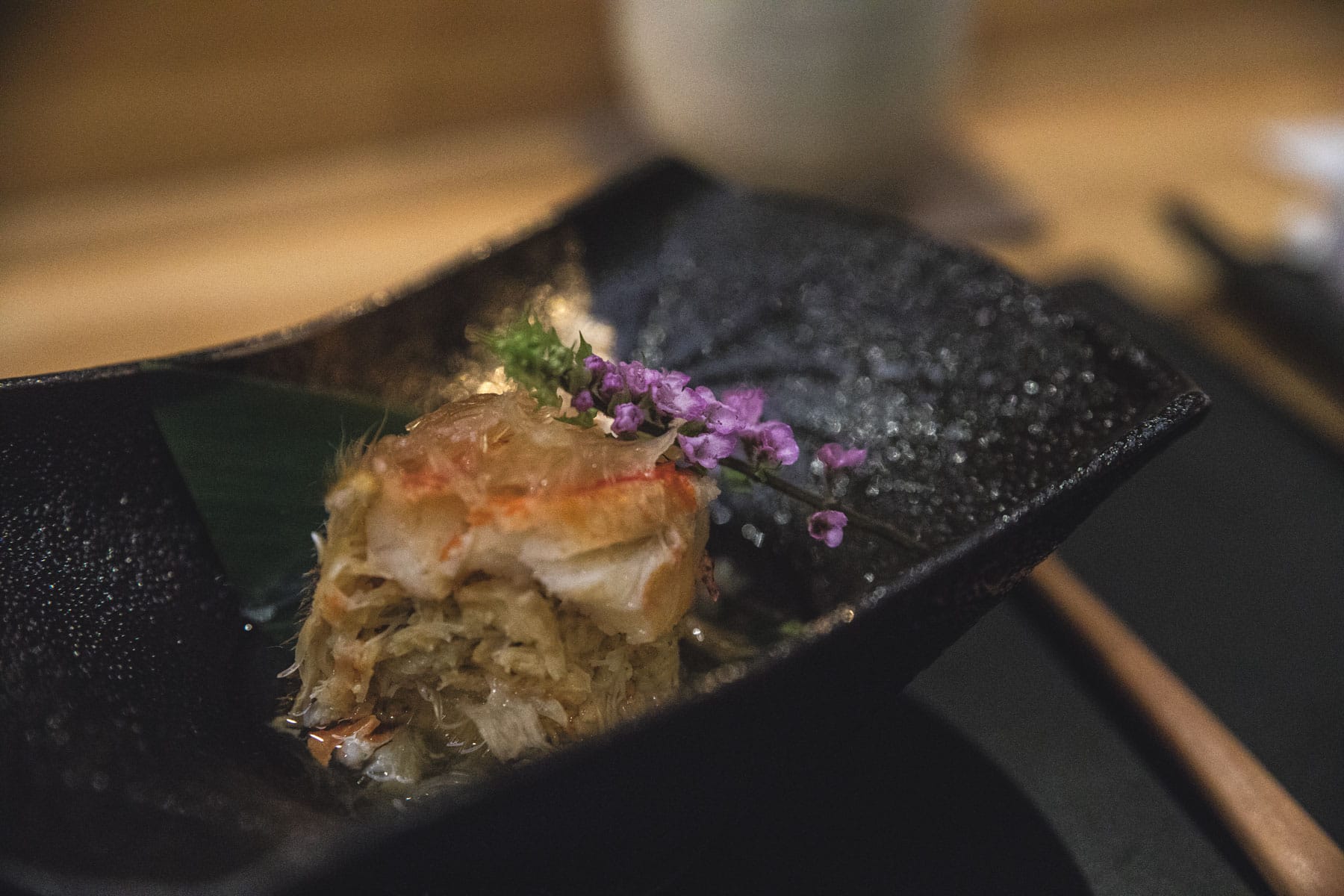 Suddenly, chef brought out a package and opened it in front of us. Woo and Ahh’s were heard around the room as we watched him take out an entire blue fin tuna from the bag. Knowing that we wanted to take pictures, chef kindly let us take as many photos as we wanted to before carrying on. Turns out the blue fin tuna, that was to be served afterwards, had just reached that morning. Hence, he took it out earlier to divide it up into the various sections and left it to sit at the side. He then explained that for some fishes, it had to be left for a while before slicing into sashimi sized pieces for the fats to spread out through out the meat. Confusing, but extremely intriguing how the fats could spread out through out the fish even though it was already not alive, and definitely a performance to watch as he prepared the dish and sliced through the fish so delicately. 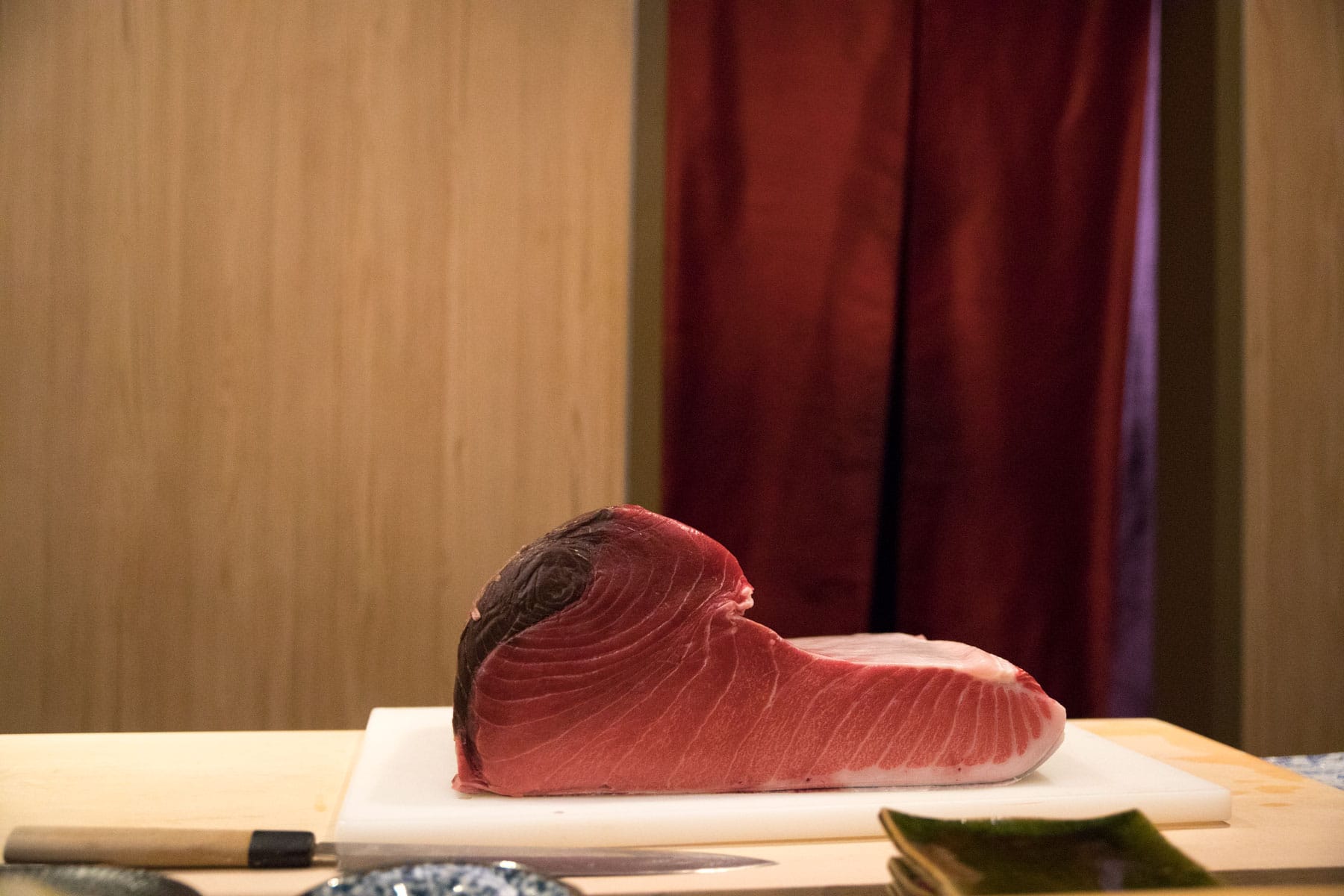 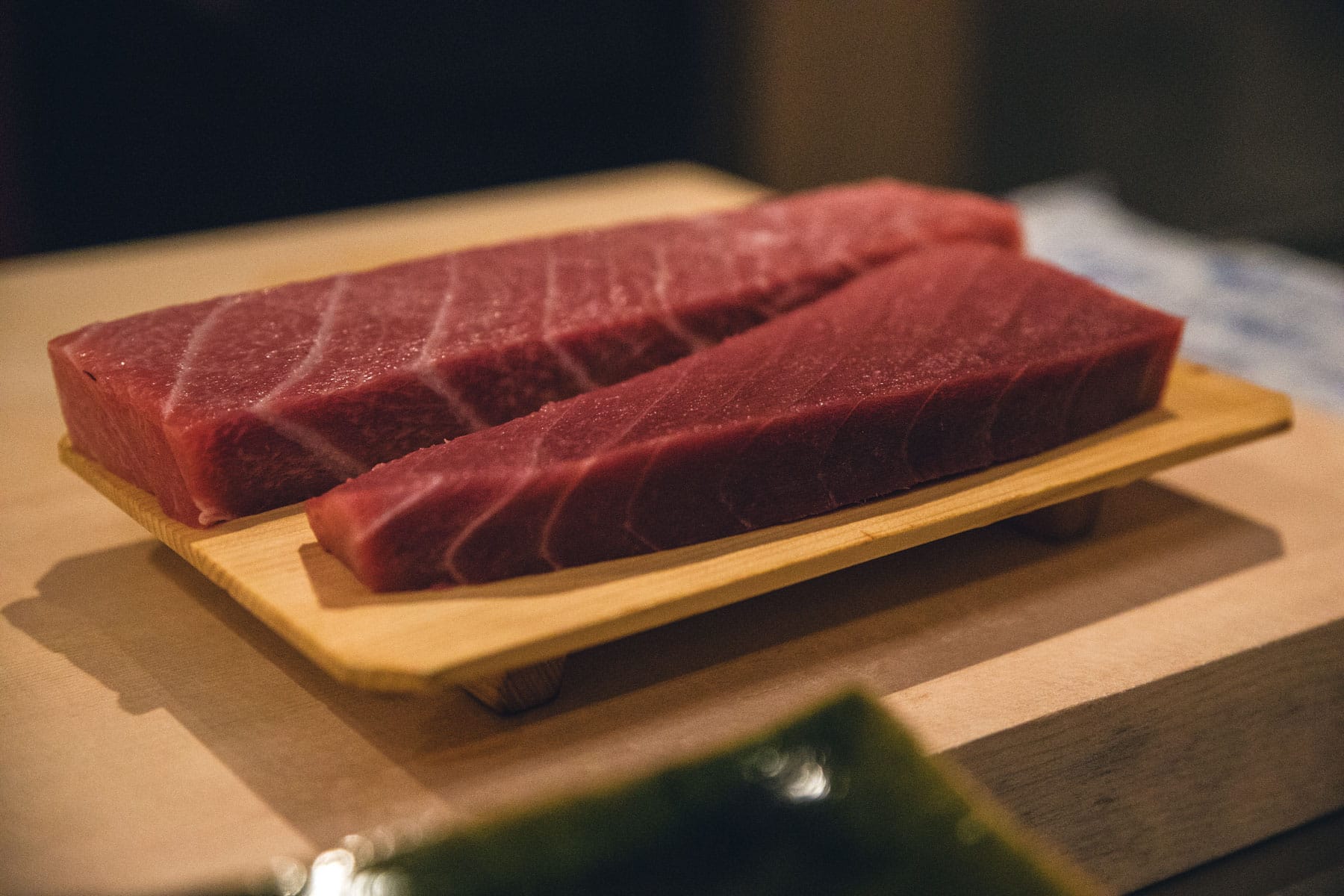 As Chef began to prep the next dish, he taught us the art of eating nigiri sushi where it is recommend to be eaten within 30 seconds of being made to ensure the best sushi experience as the temperature of the rice affects the taste of the fish. As such, a new batch of rice is made every 20 minutes to control the quality as the starch produced increases as time goes by, making it unsuitable to make sushi. The soya sauce and wasabi is also added into the sushi while it is being prepared to control the taste that is served to each individual. The proportion is also controlled where the rice and fish is of perfect proportion; having the fish almost cover all the rice. Through his sharing, his love and passion for Japanese food and cooking really shone through the attention to detail that goes into each ingredients. We then continue to watch with much admiration as he prepared and served us the nigiri sushi – Matsukawa Garei – Japanese Flounder Fish from Chiba, Hokki-Gai – Surf Clam from Hokkaido and Sayori – needlefish from Chiba. 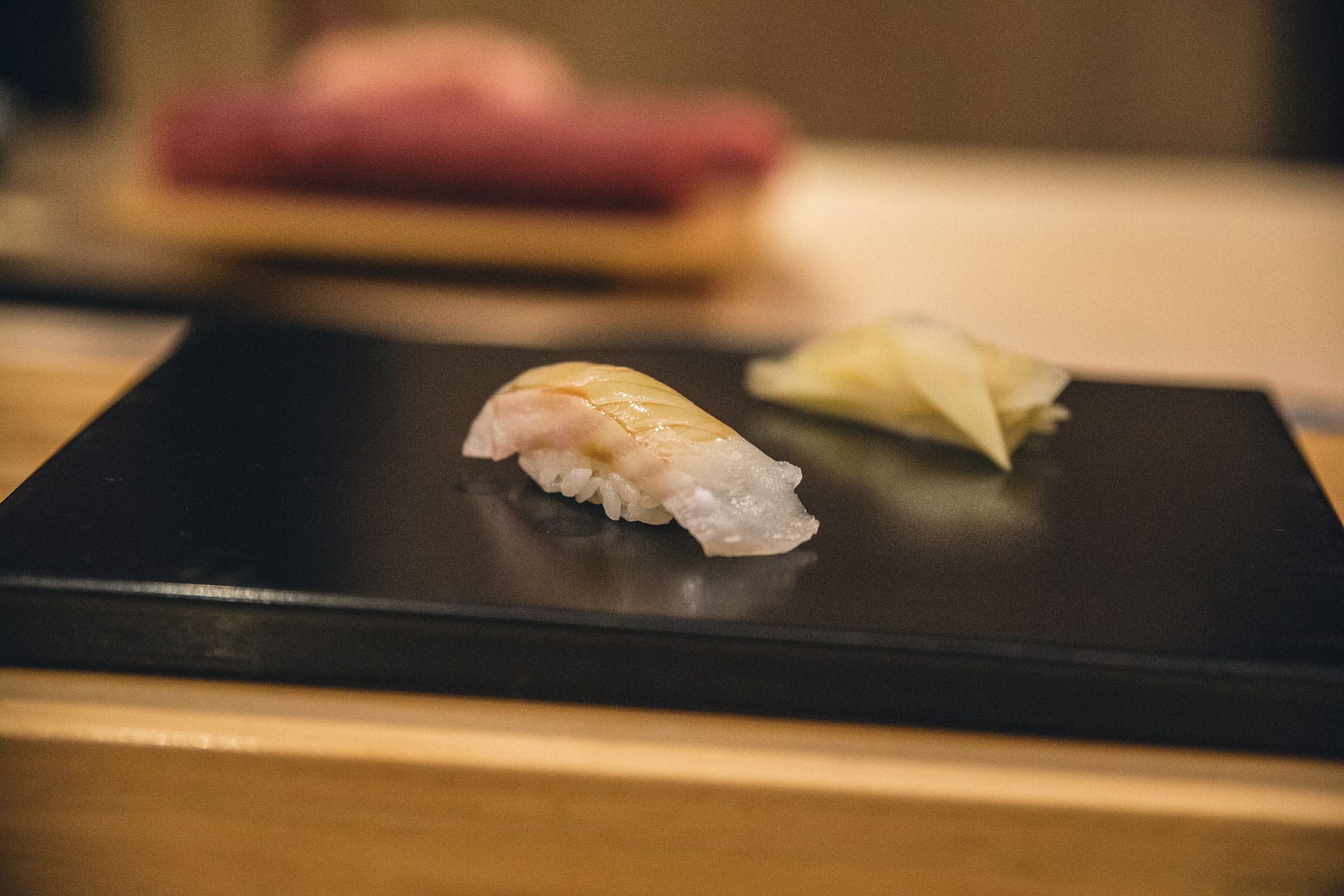 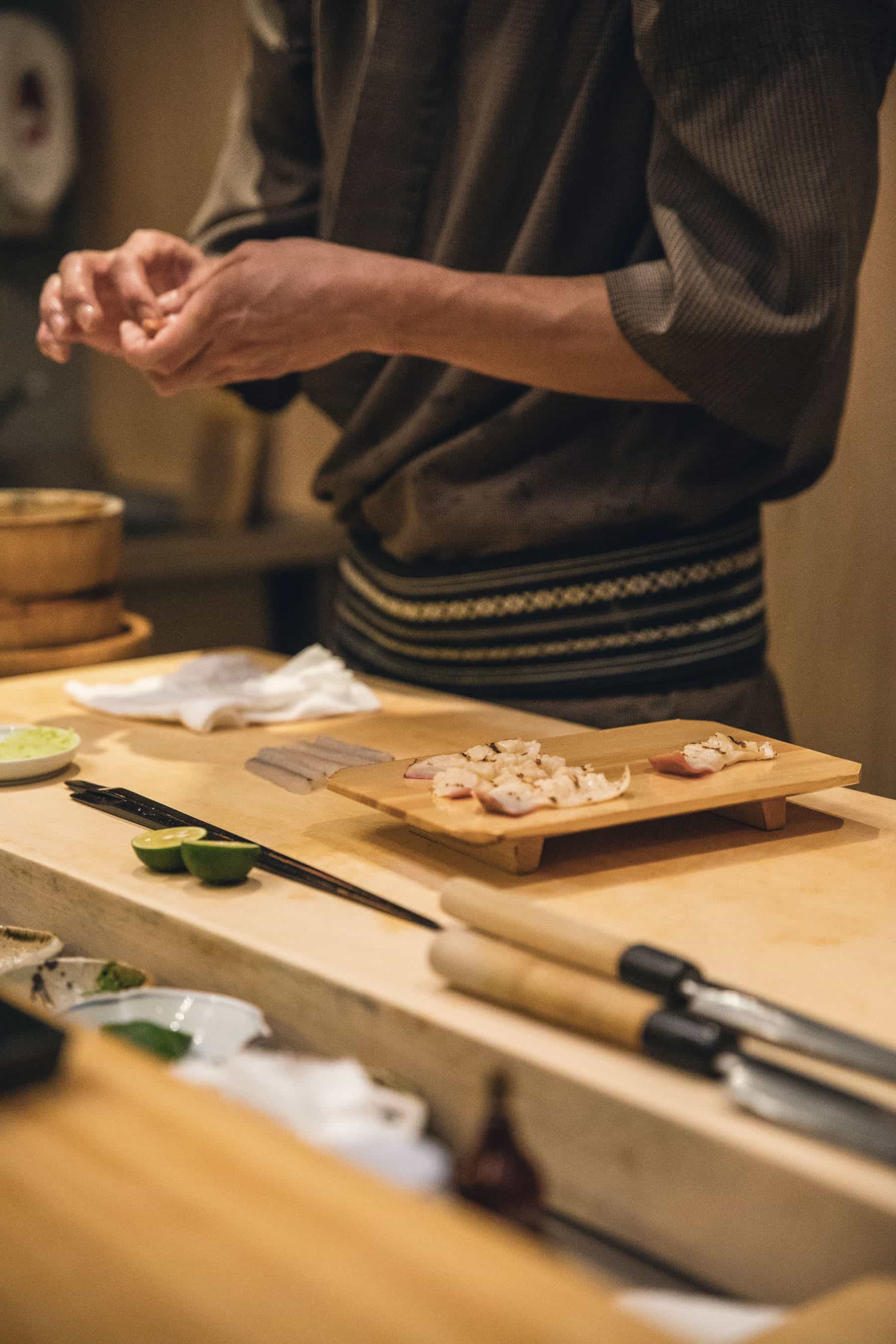 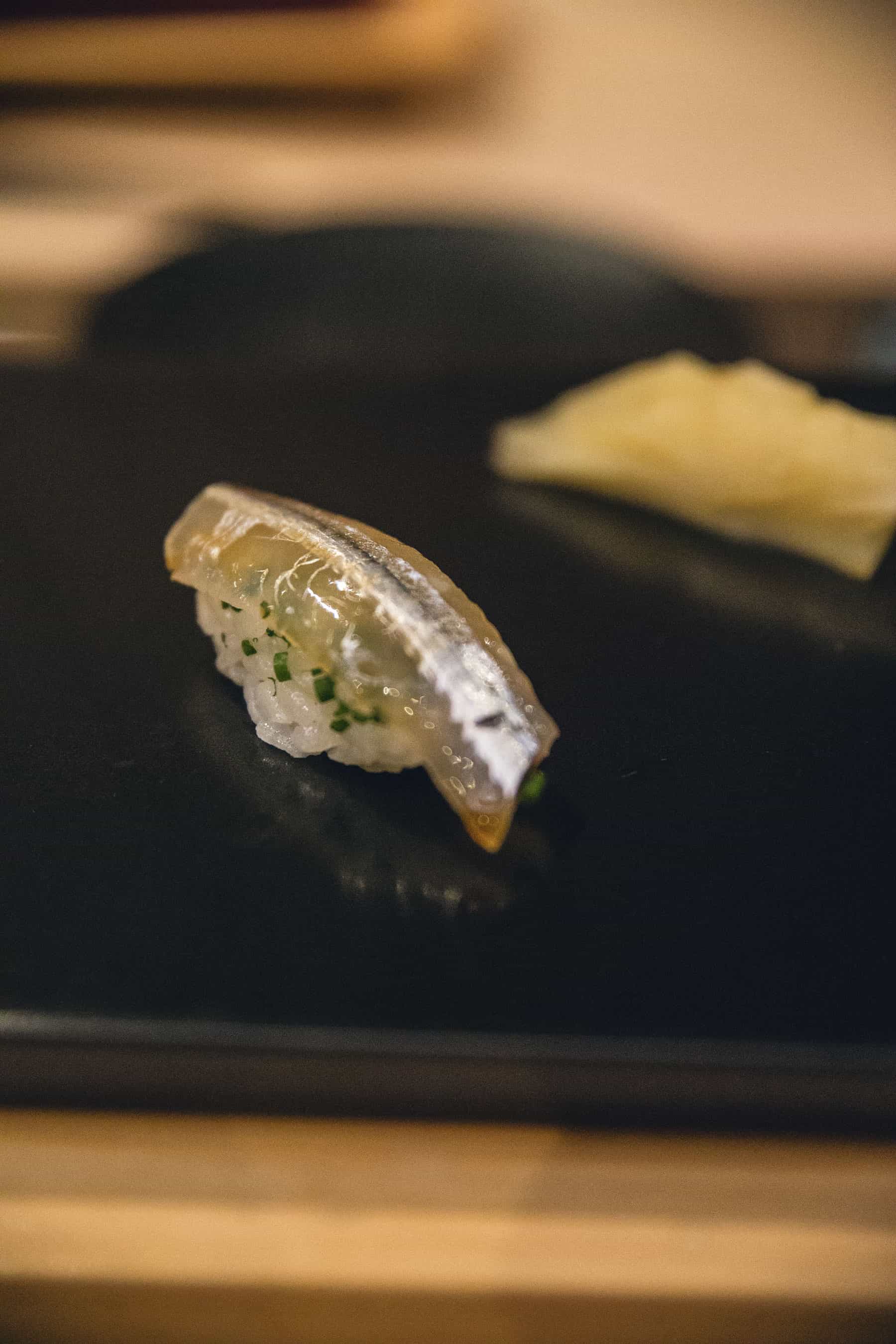 After which, Matsutake Shirono, a clear soup containing the most precious and rarest mushroom in Japan that is only available in Autumn, was served. As we indulged in it, I felt so honoured to be able to relish in something that was so rare and unique to Japan. 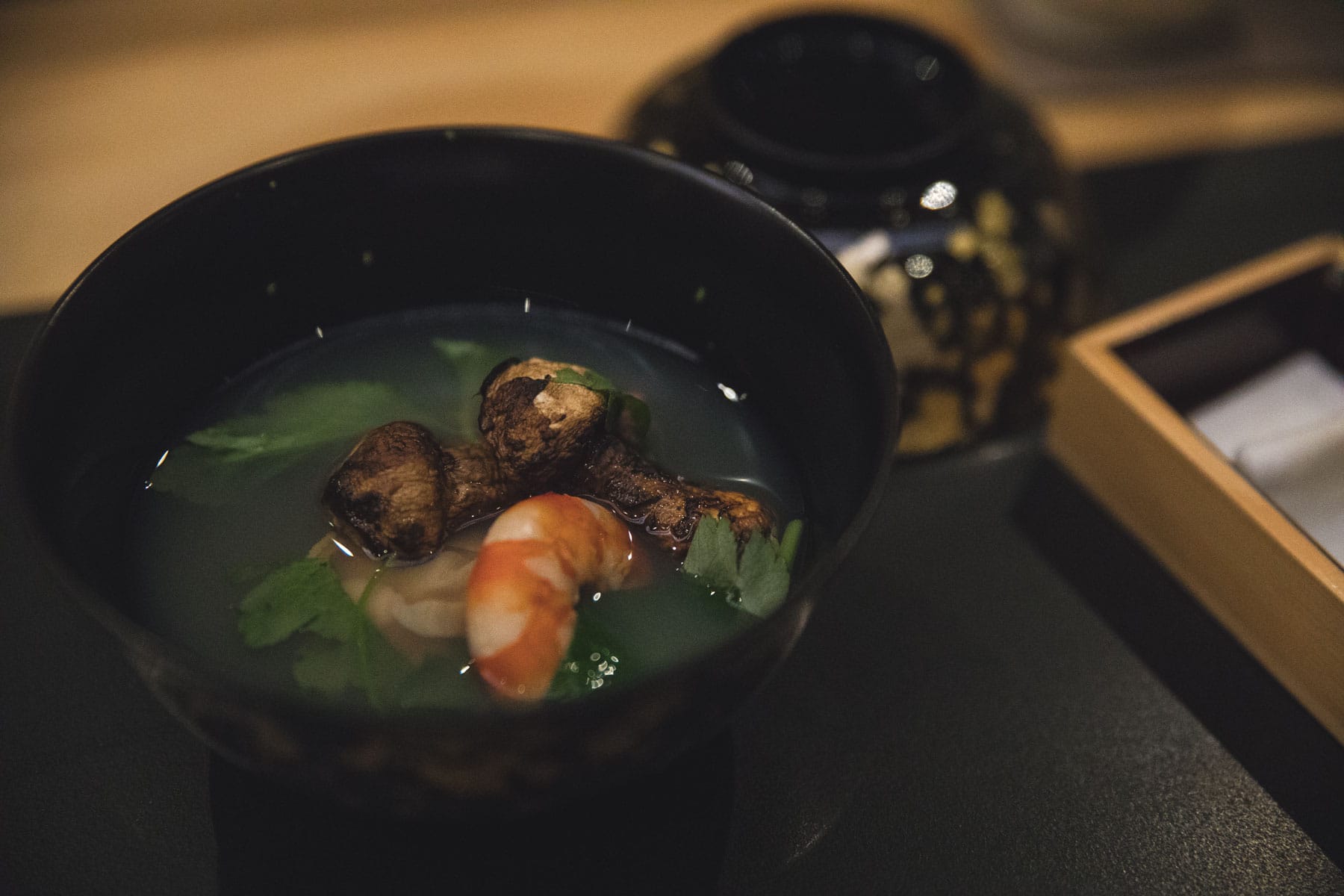 At last, the blue fin tuna was ready to be prepped! Divided up into three sections of the fish; Akami, Chutoro and Otoro, chef then displayed preparation of each sections and share the differences. His personal favourite: Akami, as it has less fattiness compared to the rest. Unlike the other sections, otoro was prepared aburi-style and it was a sight to behold as chef torched it using charcoal to add a charred aroma to the dish. Salmon aburi is usually more common in Japanese restaurants, as such it was really interesting to try tuna aburi for the first time. Without a doubt my personal favourite nigiri sushi that day. 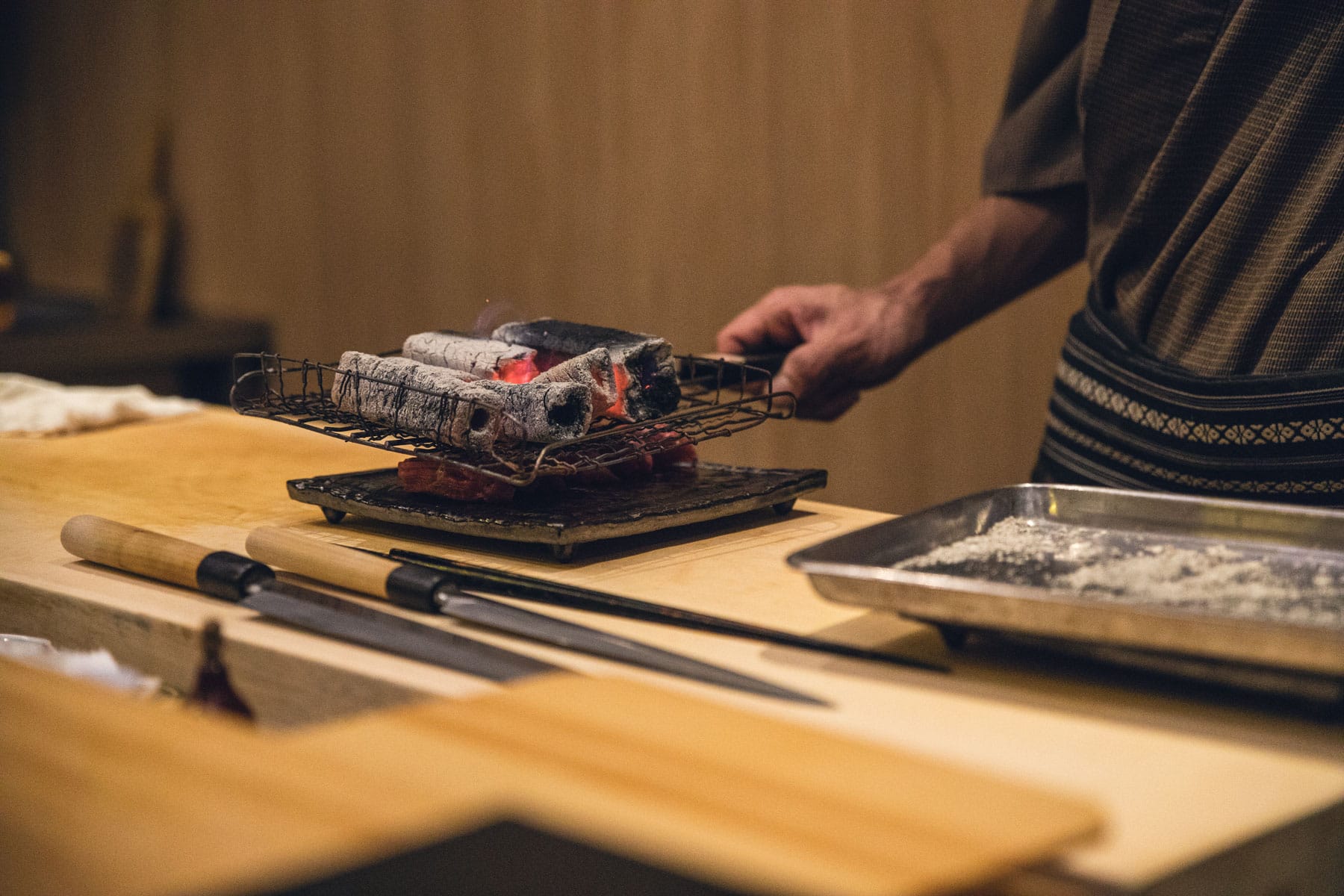 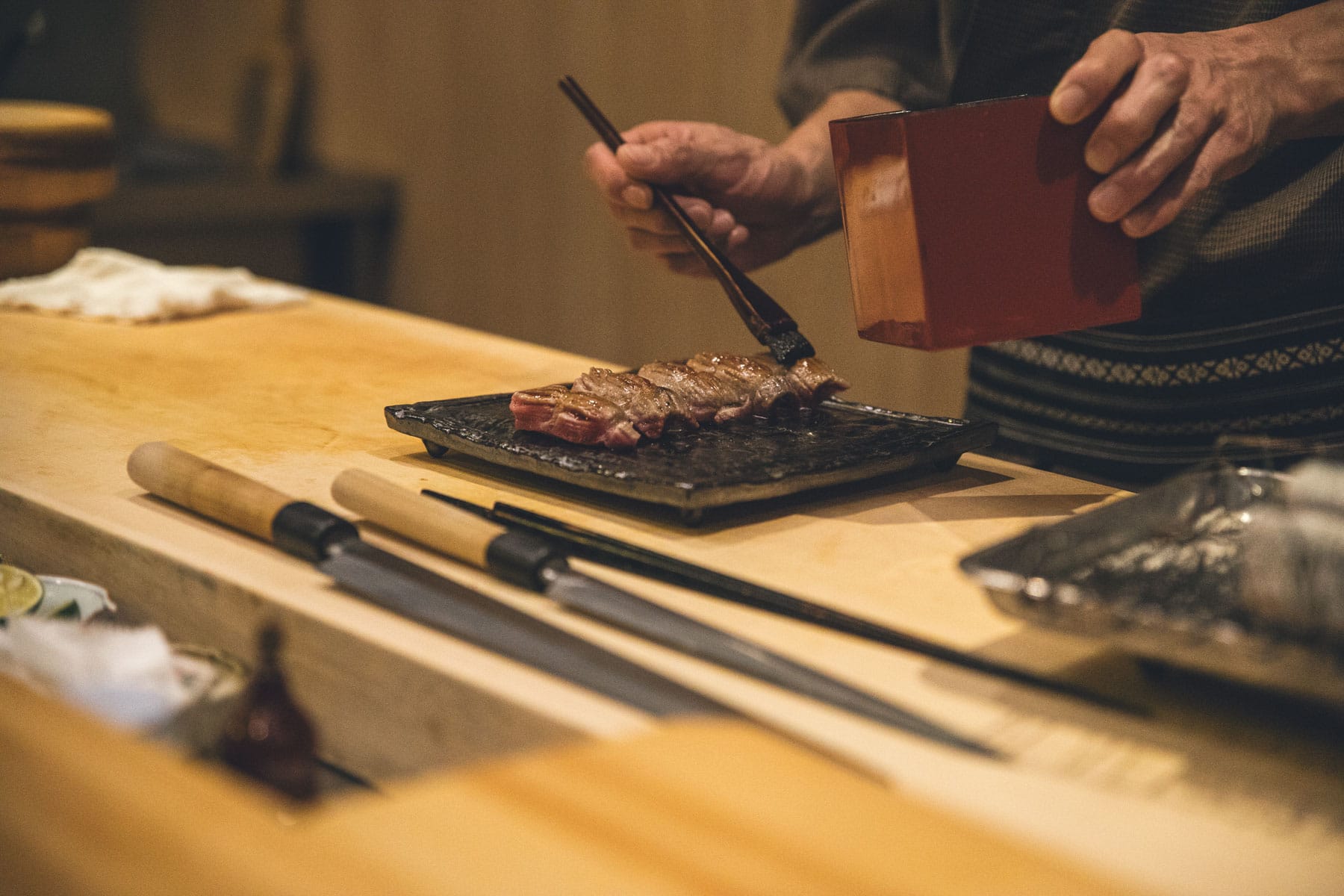 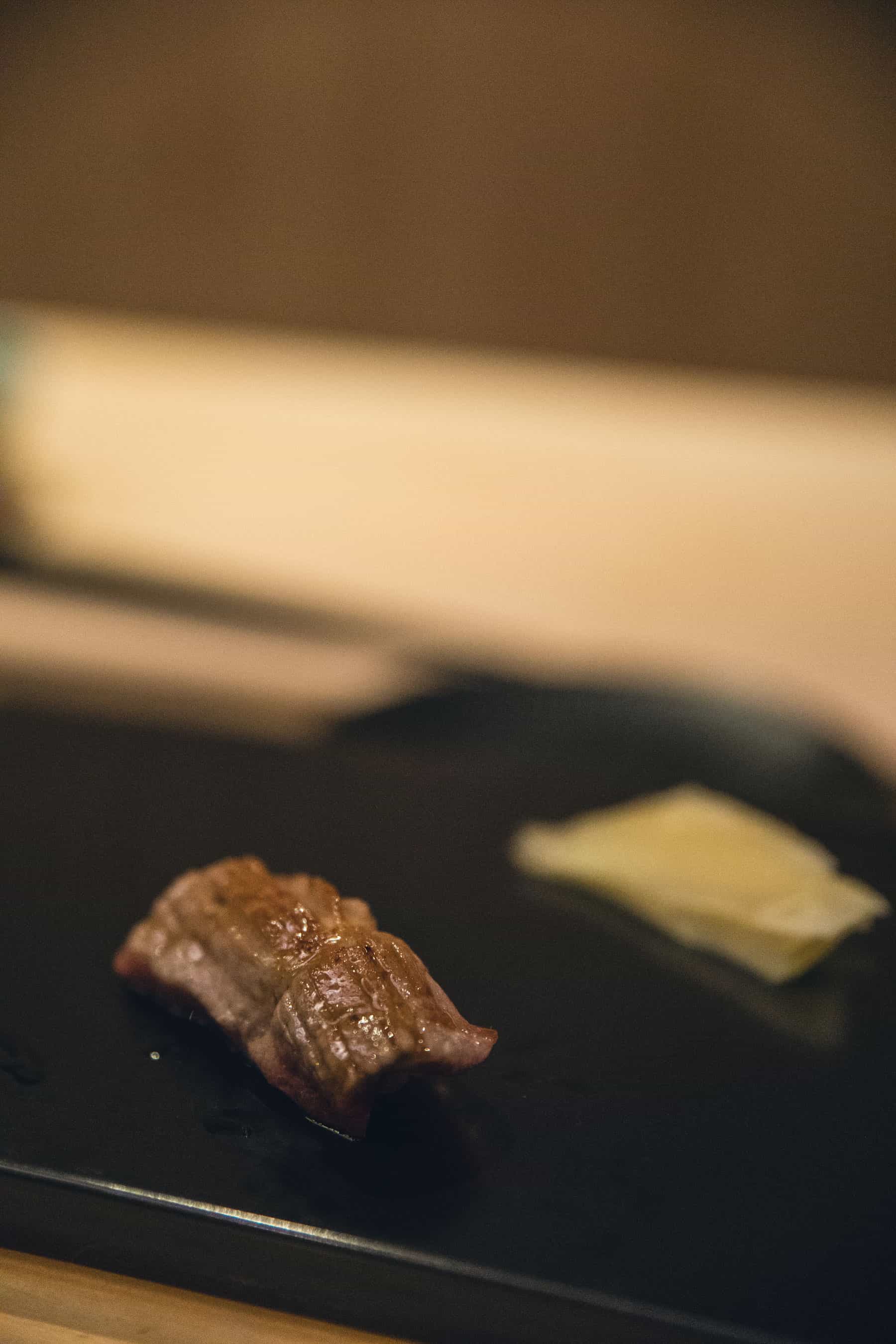 As we slowly savoured each course and conversed with chef while he prepared the next course, he explained to us the art of Japanese cuisine and Omakase where the original flavor of the produce isn’t tampered with. Instead, they focus on bringing out the best of the freshest produce by complementing it with other ingredients that will enhance its taste. This really impressed and reflected how much Japanese cuisine respected the produce for what is was and instead of changing it, sought to bring out and allow us to taste it at its finest.
At last the Uni Mozuku – Sea Urchin has appeared! I was slightly anxious eating this dish, as I did not have a very appetizing impression of uni due to the poisonous properties of its spins. However my concerns faded along with my first bite of the dish. There was completely no pungent aroma and sweet taste of the uni along with the creamy texture made the dish lusciously exquisite. 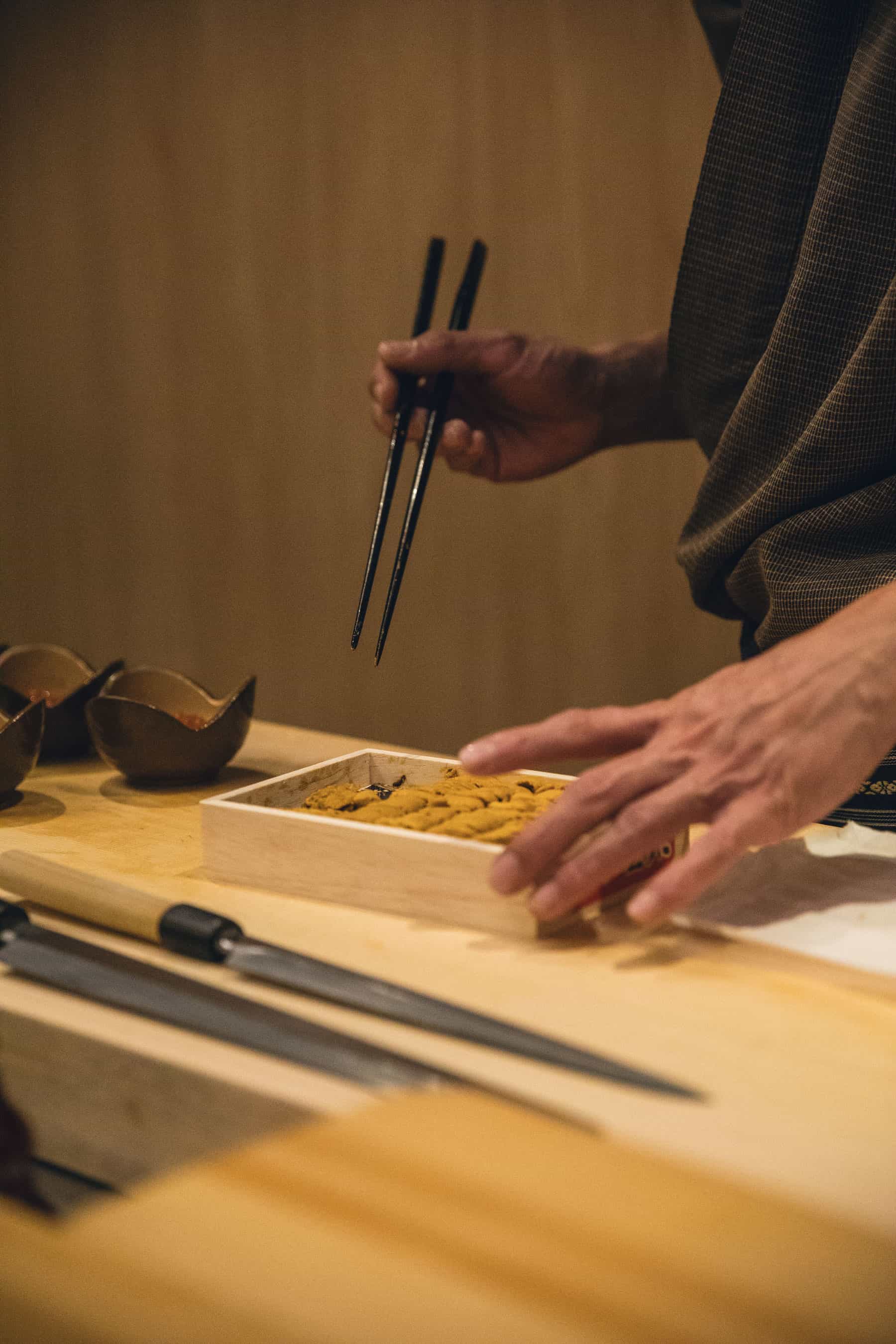 At this point, about three quarters into the course, although it may seem like no one could get full, I was really getting full already. The small portion and the time period between each course really allows one to savour many types of dishes on a small scale, gradually filling you up.
Personally, I do not like salmon roe. So combining that fact with my unsureness for uni, I was indeed taking a step of faith that fine afternoon with this next dish, the Uni Ikura Kodonburi – Sea Urchin & Salmon Roe Mini Rice Bowl. To my surprise, this dish shocked me with its creamy texture and how well the two different textures of both ingredients complemented each other so well. 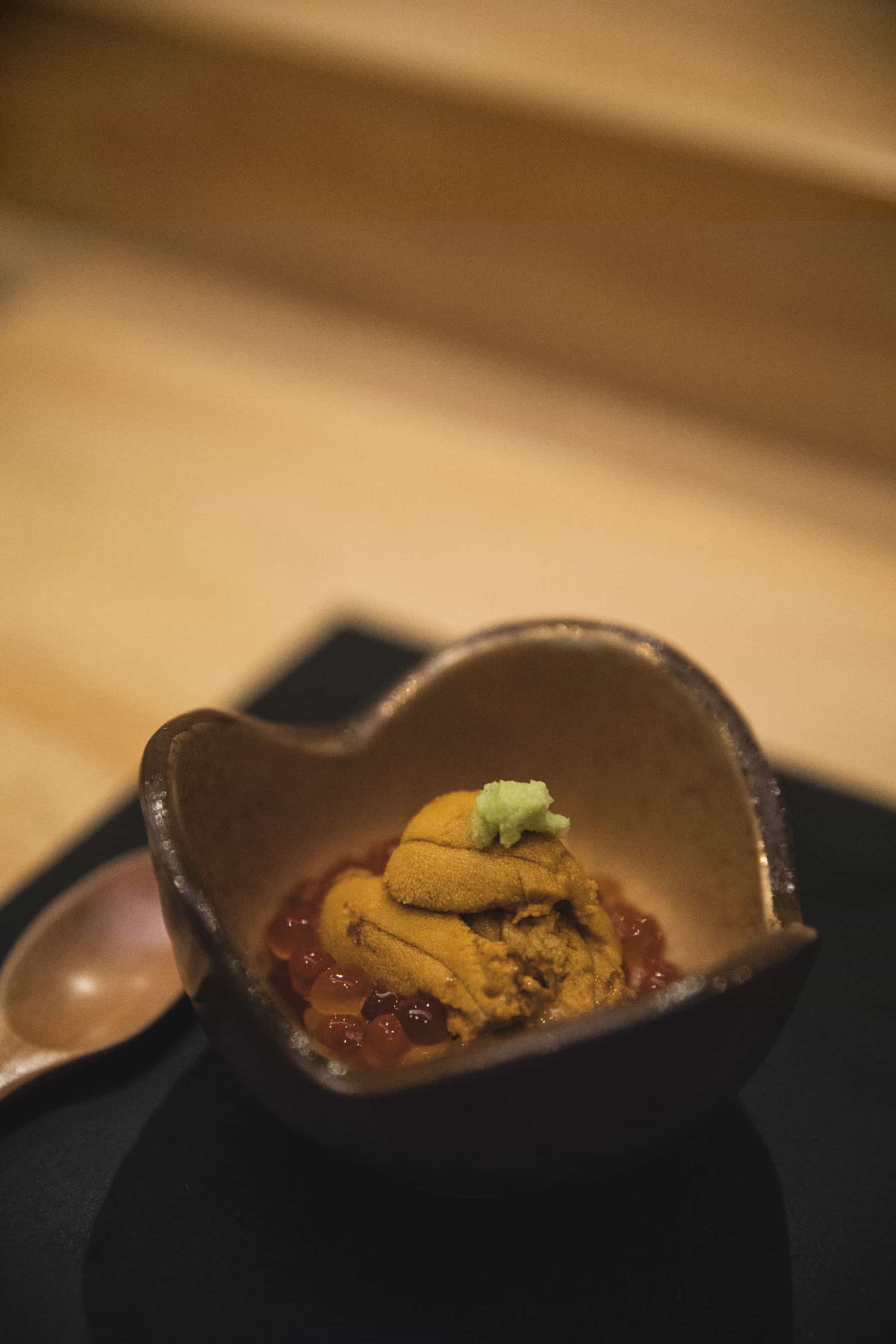 Miso soup was then served to wash it all down followed by the Tamago – Japanese Omelette. While it looked like any ordinary tamago and I had expected it to taste the same, boy was I in for a surprise. The mind-blowing creamy custardy texture of the egg just melted in my mouth, creating an almost caramelized sweet milky taste. Lesson learnt: Never judge a dish by how it looks. 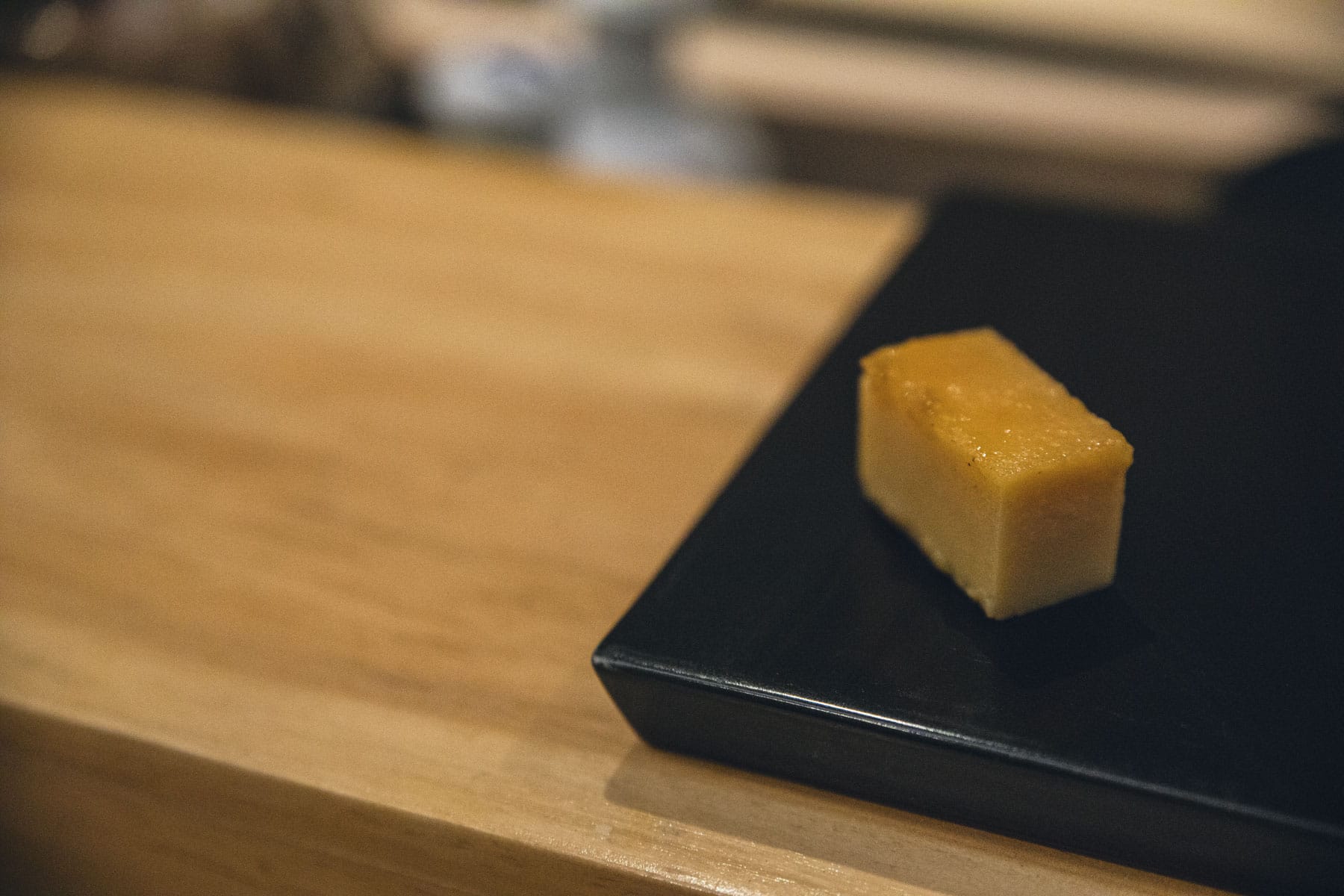 For the last dish, Shiro Ebi Temaki – White Shrimp Rolled Sushi was wrapped up and passed to us by hand for immediate consumption, before a sweet dessert compromising of Japanese muskmelon and rock melon completed the entire 16-course menu, lasting slightly over two hours. 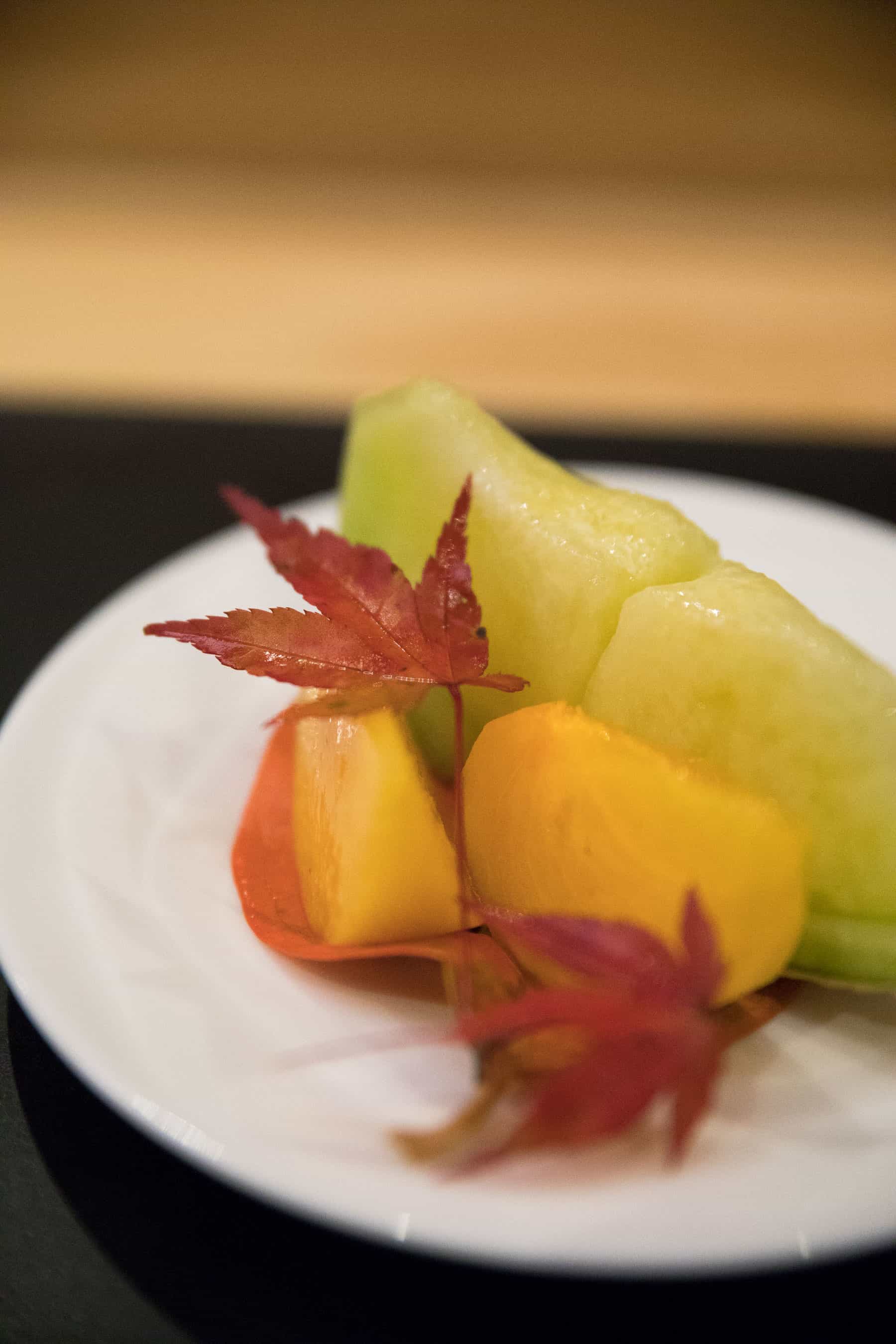 The entire 16-course menu was really a gastronomic dining experience where I was left blown away by the uniqueness and freshness of each produce and how it came together to complement each other so well. It felt like a mini showcase of all the best produce from around Japan, combined together to create the ultimate Japanese cuisine experience. In addition, the intimate setting and warm ambience really allowed us to slowly appreciate the finest of Japanese cuisine. The conversations with Chef gave us an insight into the level of passion that goes into being a Japanese chef and the amount of passion and attention to detail that goes into creating Japanese food. I will definitely never look at Japanese cuisine the same way again after learning and understanding the art behind it, and savouring Japanese dishes I had never even knew about prior.
One thing I took away from this opportunity was to not judge for what you think you already know about Japanese cuisine. The Omakase Japanese fine dining experience will really surprise you and introduce you to a whole new form of art. Definitely an incredible experience that words cannot describe well enough. You just have to go through it to really understand and appreciate the Omakase experience for yourself.

Shoukouwa will be participating during the third week of Gastromonth, themed ‘Mineral’, offering an exclusively designed 16-course Omakase lunch menu at $240++ from 13 – 19 November 2017. More details here.