Netflix’s sinister show Squid Game has been sweeping the world, with its disturbing plot and graphic scenes.

The premise of the show seems interesting and tame enough—a 45.6 billion Korean won prize money in exchange for playing a few games. But the show soon takes a turn for the morbid when participants find themselves in a mysterious survival game, only it’s not really a game at all, but an actual matter of life and death, where any wrong move can get your head blasted off.

What better way to promote this harrowing show than by turning one of the most popular train stations in Korea into a small-scale Squid Game itself? On 17th September 2021, the day of the show’s debut on Netflix, Itaewon Station was transformed into a wacky pop-up playground, filled with various iconography inspired by Squid Game.

The set-up at Itaewon Station is eerie to say the least, decked in Squid Game’s iconic hot pink colour, complete with the creepy little girl/doll from the first episode, Red Light, Green Light, as well as the giant piggy bank containing (fake) bills. For those who are obsessed with the show, this is probably as close as you can get to the Squid Game experience, sans the life-threatening consequences, thankfully. 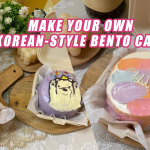