The newest addition in town, Timbre+ (or Timbre Plus) is an urbanised food hall that offers a diversity of local food fare, casual eats as well as restaurant-grade food at affordable prices.

With music and live performances to jazz up the atmosphere, Timbre+ redefines Singapore’s food and beverage industry as the home to 35 dining options housed in repurposed shipping containers and vintage caravans – similar to the concept of Artbox, a container food centre in Bangkok. An array of graffiti and spray paint art also makes its mark on some of the containers and caravans, taking ‘hipster’ up a notch at the modernised food centre. 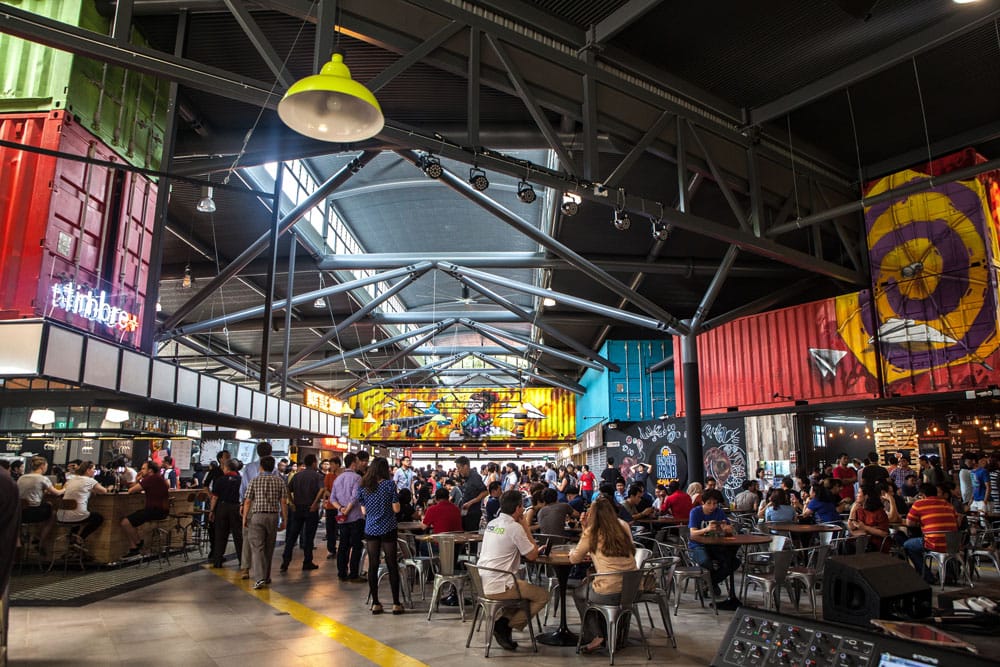 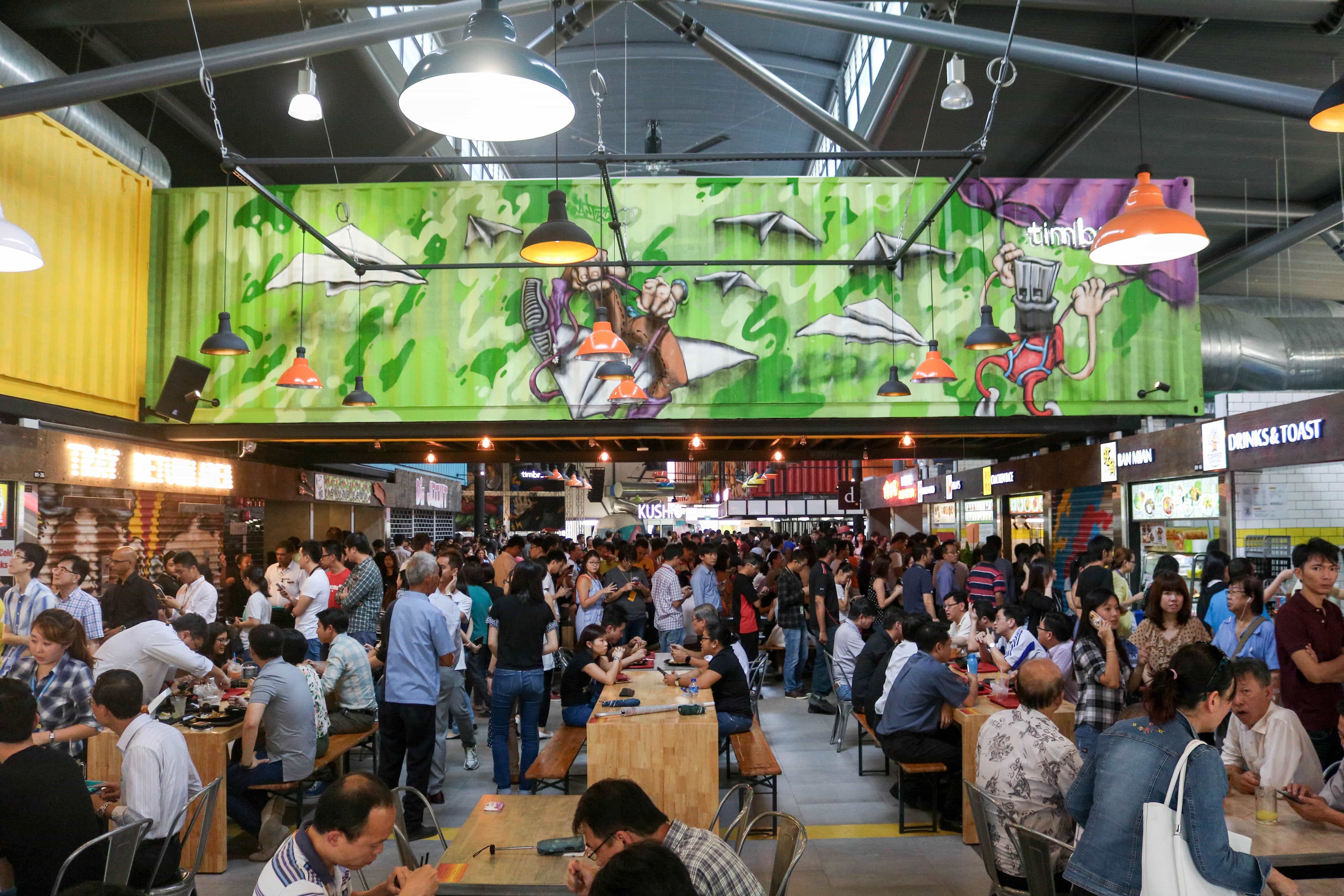 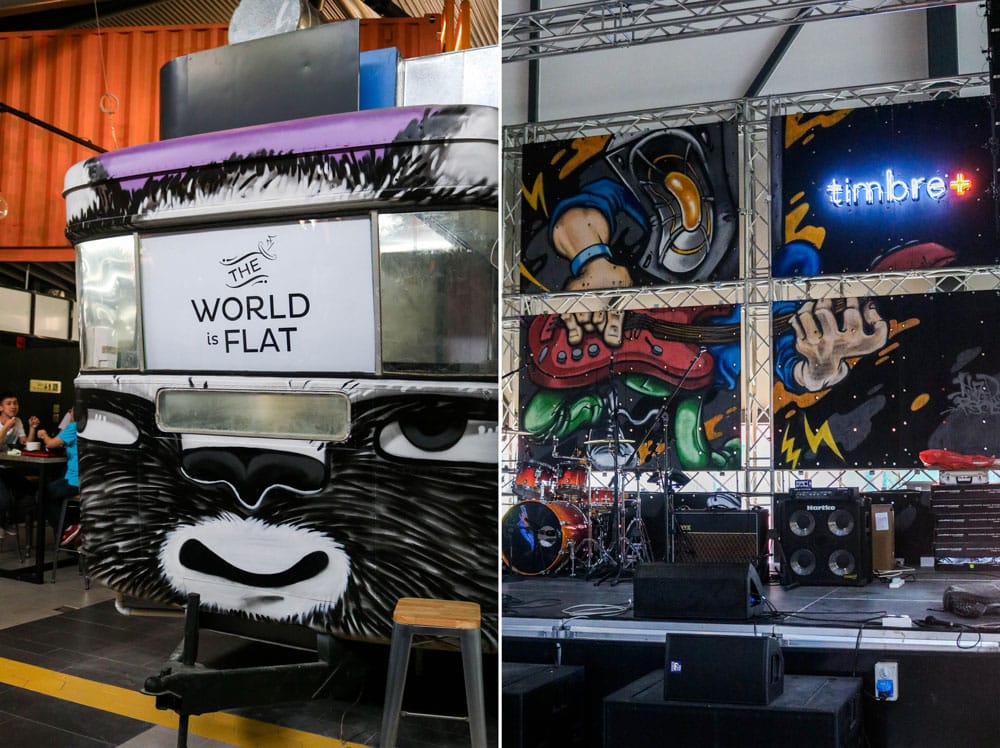 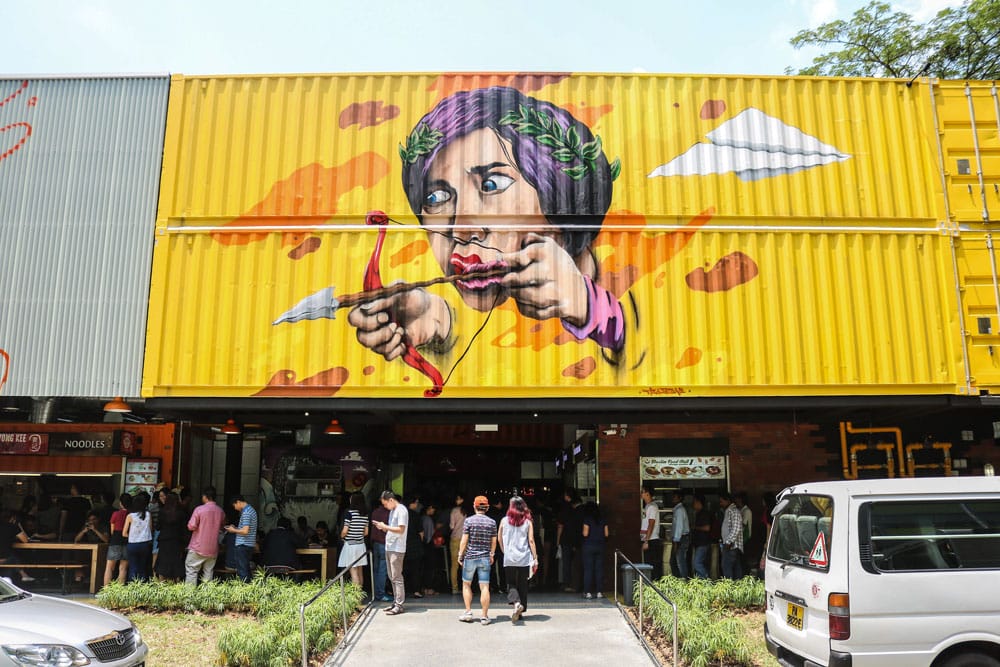 Boasting an impressive community of 21 hawker stalls and 14 restaurant brands, patrons at Timbre+ can opt for local food fare such as chicken rice, wanton noodles, nasi padang, or have something fancy such as lobster rolls or pizzas. Listed below are some of the notable highlights in the urban food hall.

Serving country-style Cajun seafood in bags, lobster rolls and sandwiches, Dancing Crab Shack is akin to the popular Boiling Crab from the United States and is equally well-received in Singapore. The Lobster Rolls (SGD $24) are served in a pair alongside shoestring Cajun fries, where fresh whole lobster chunks are used. 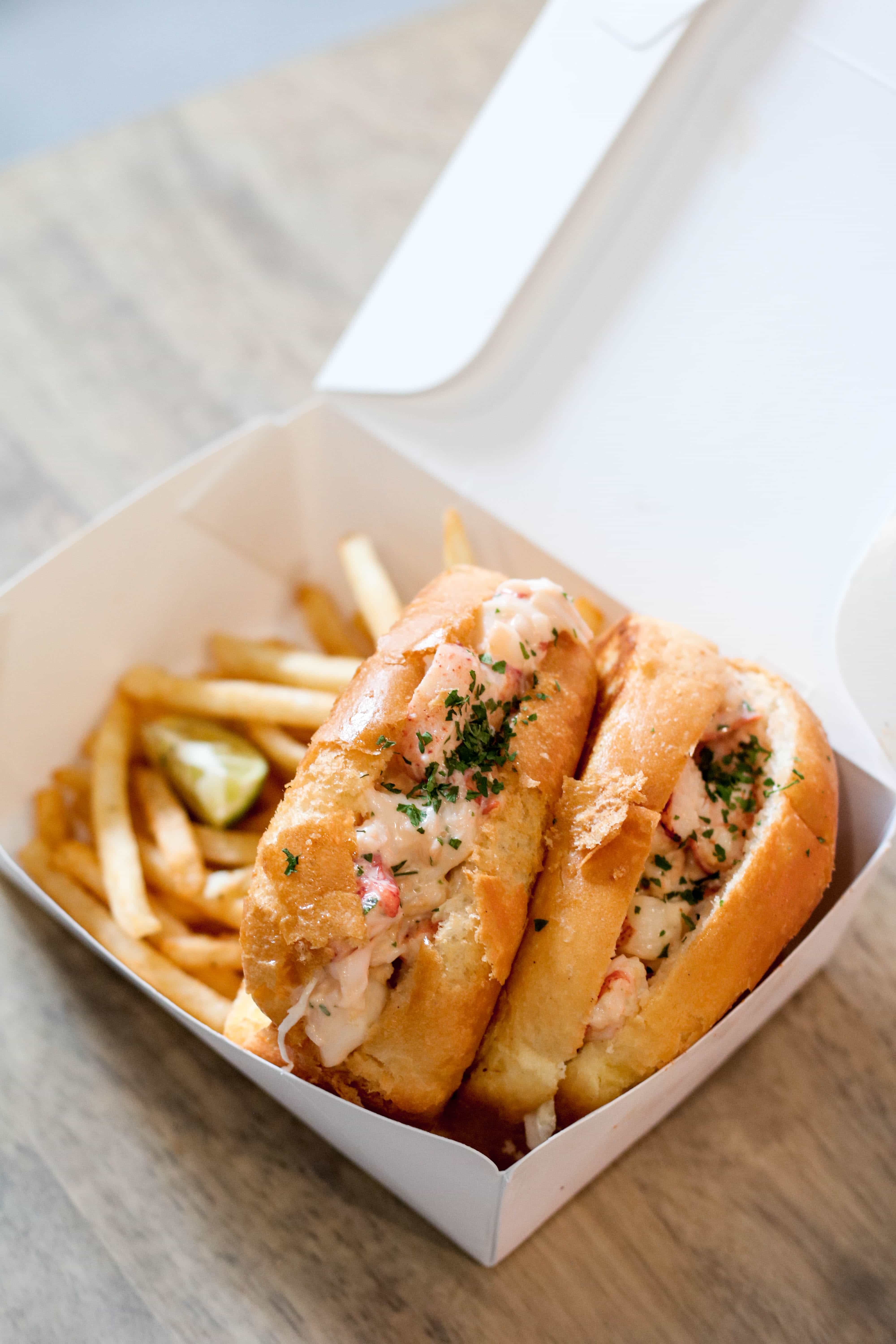 Known for their succulent fried chicken wings, Two Wings recently opened another outlet at Timbre+, catering to the west siders and working crowd in the area. At only SGD $8.90, a full meal consists of 4 chicken wings, a side of fries and a drink. The secret 40-year old recipe chicken wings are served with good old Hainanese chicken rice chilli sauce and as per their tagline, ‘one just isn’t enough’. 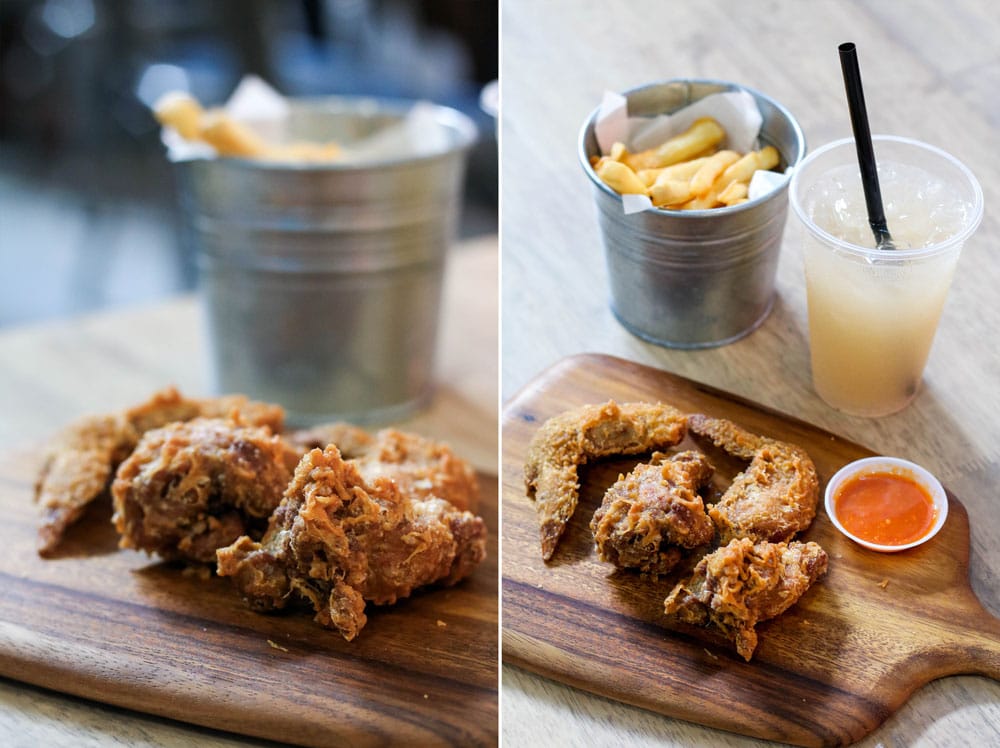 With the concept of ‘design meets culinary’, Food Anatomy believes in the fact that dishes should not only be tasty but aesthetically pleasing as well – hence leading to the fact that every dish is served in a multi-layer cube form. Every meal is SGD $16 and consists of a choice of 3 dishes where customers are free to mix and match any of the main dishes, desserts or salads. Current promotion entitles patrons to 25% off all meals at Timbre+. 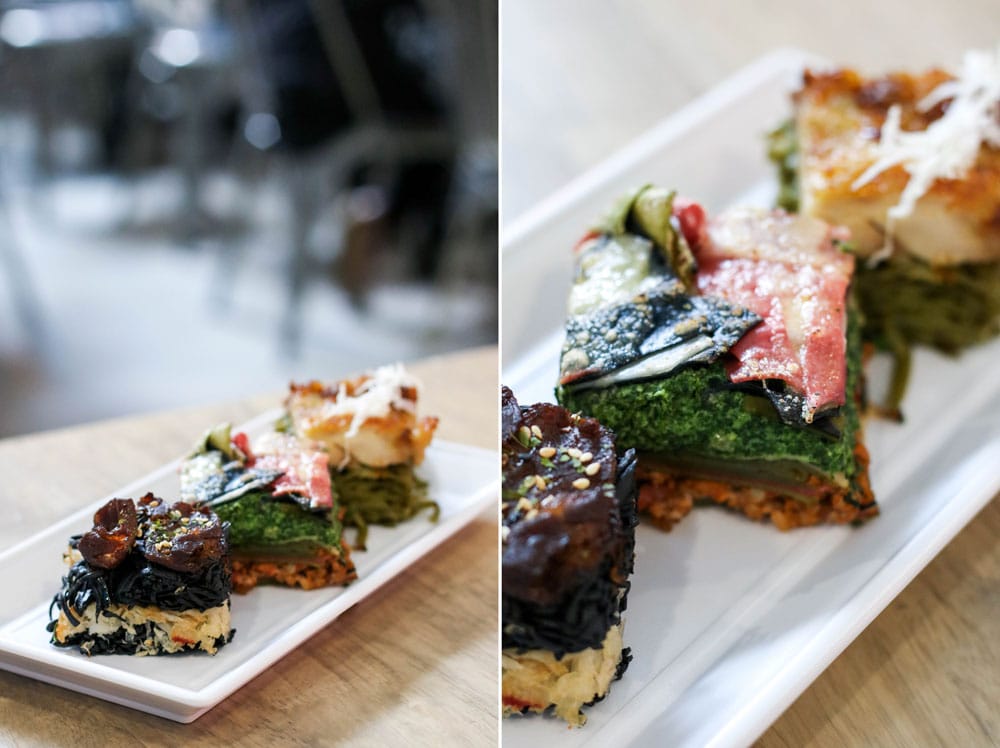 Shifting grounds from the iconic Maxwell Food Centre to the urbanised Timbre+, Wong Kee Wanton Noodle is known for their special orange-coloured tomato noodles with a sweet tomato aftertaste. Patrons looking to try a unique bowl of wanton noodles can opt for the Char Siew Dumpling Tomato Noodles (SGD $4.50) that is served with a small bowl of dumplings soup. Alternatively, one can try another of their best selling item, the Beef Brisket Spinach Noodles for SGD $5.50. 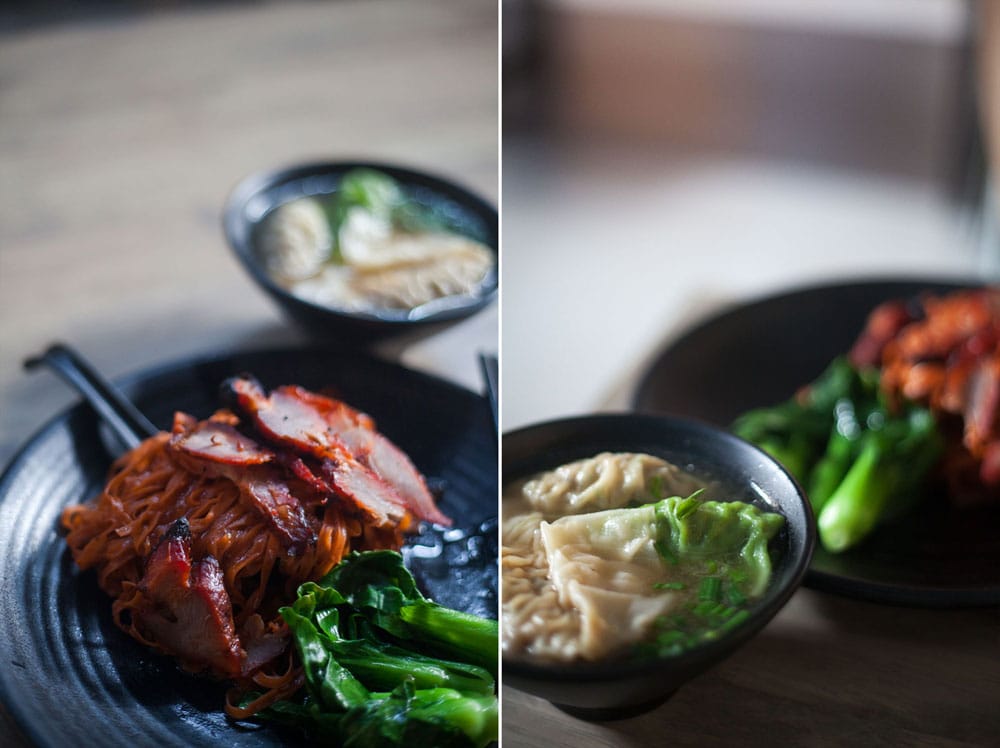 Known for their Japanese concept food, Teppei Daidokoro serves up yakitori skewers, dons as well as teppanyaki. The stall offers a selection of chicken meatball, pork belly, quail eggs and sashimi – catering to the diversity of the crowd at Timbre+. 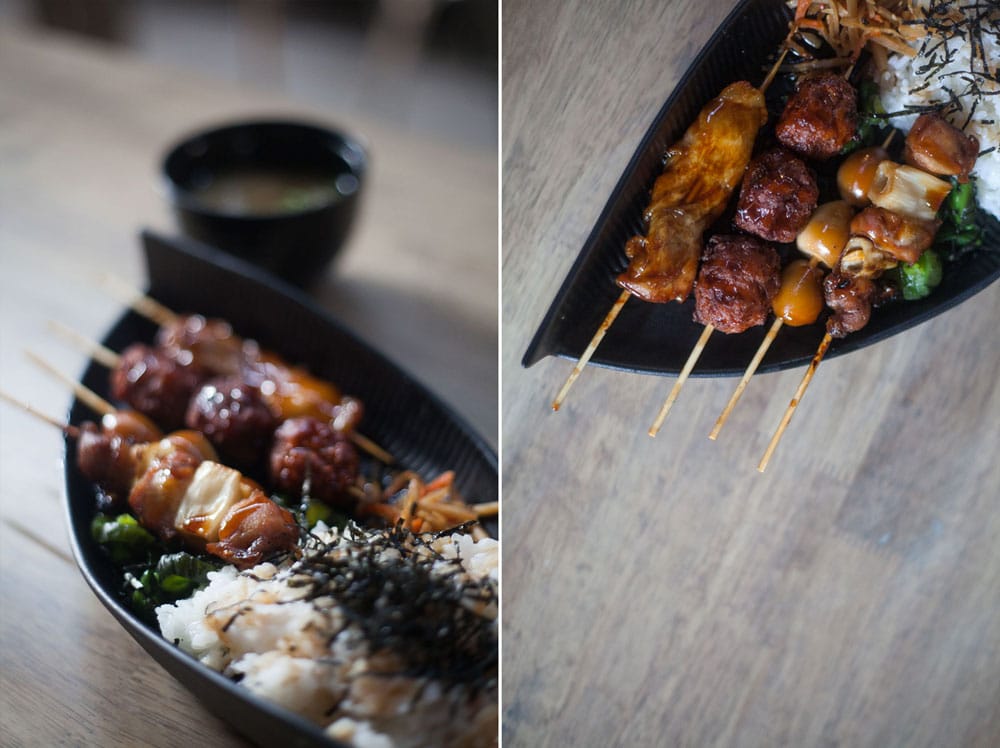 Iskina Cebu
Always boasting a long queue is a restaurant featuring authentic Philippines food such as the Lechon Cebu, Iskina Cebu is extremely well-received for their grilled meat. The menu features set meals, which is accompanied with rice, and samplers such as the Double Lechon Sampler (SGD $11) which includes lechon (suckling pig) alongside liempo (grilled pork belly) OR inasal manok (grilled chicken). 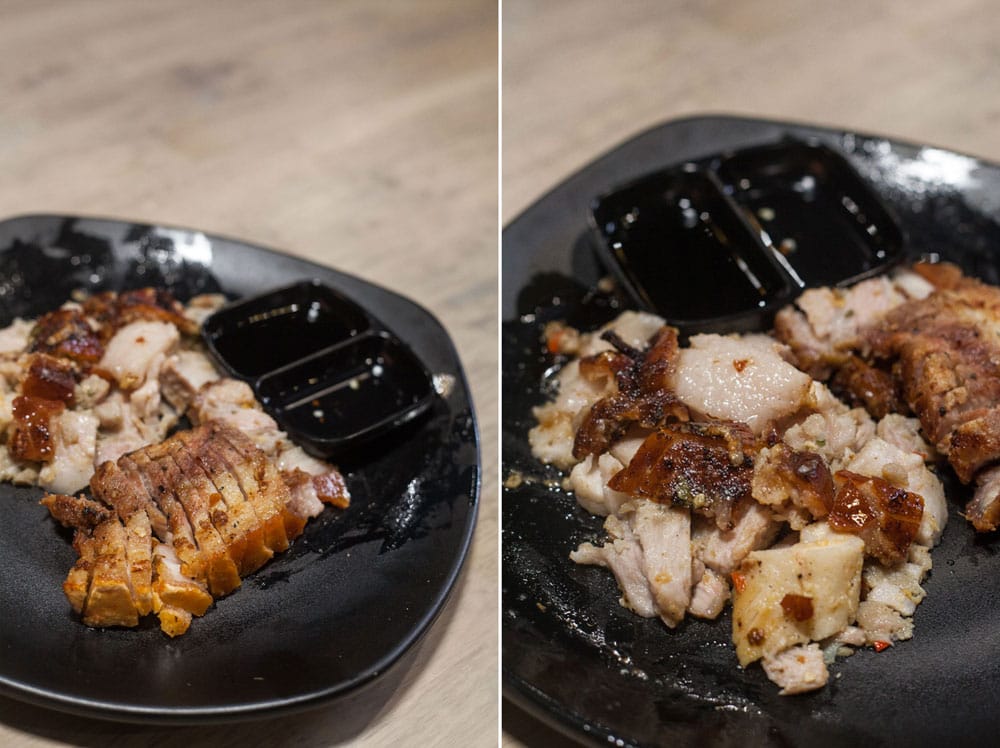 Other restaurant brands worth a try include Soon Huat Bak Kut Teh, The World Is Flat by Tanuki Raw which serves unique Japanese concept pizza topped with your favorite pizza toppings including duck confit, bacon, prawn and bonito flakes.

As part of the effort to encourage responsibility in tray returns, Timbre+ introduced the $1 tray return system – where patrons can opt to have a tray and pay an extra dollar for it, and their dollar is only refunded when they return the tray at the centralised location through an automated coin return system. 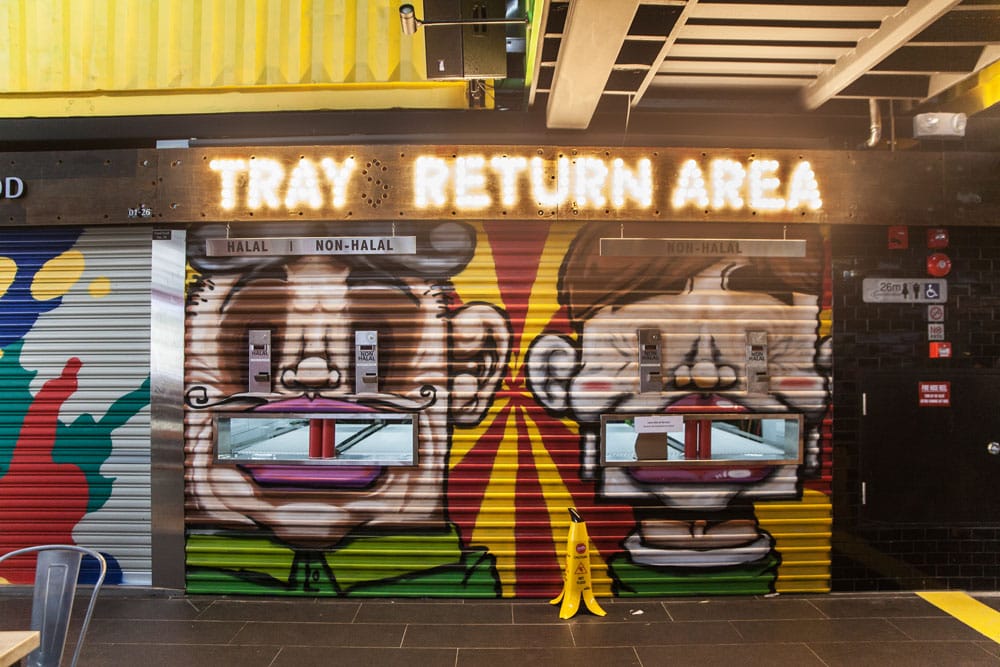 To enliven the experience for patrons, Timbre+ features a few local music acts such as Sweatshop Jam, The Common People, Supersonic and O.K Ready from Wednesdays to Saturday evenings. With the bands performing live on-stage, the atmosphere of the gastropark turns from being a regular food centre to a hip bar. Drinks are also available at Bottle Shop, Timbre+’s very own bar for some beer and liqueur. 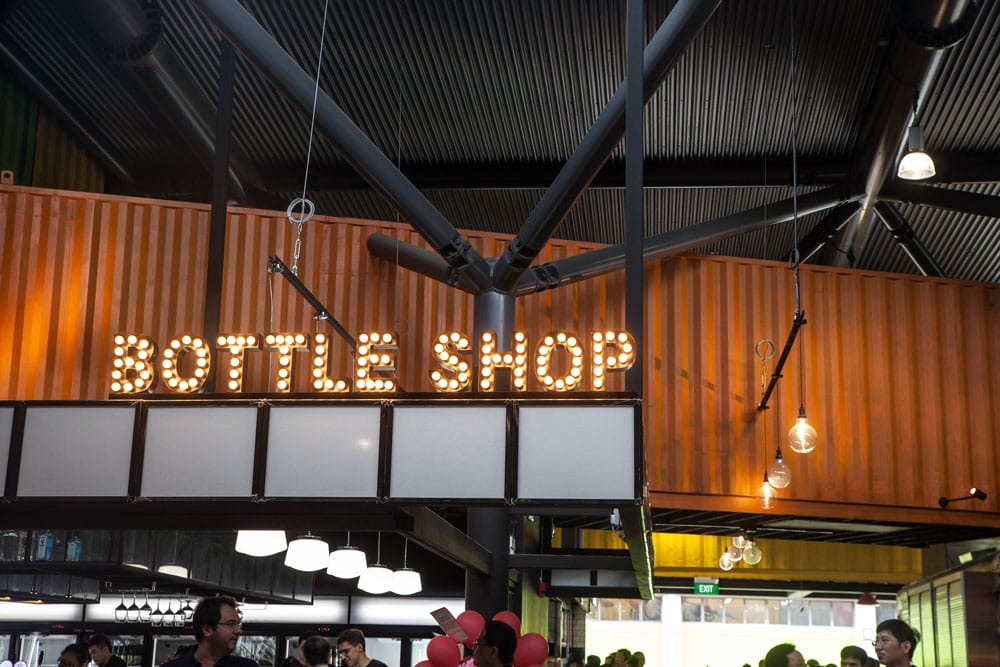 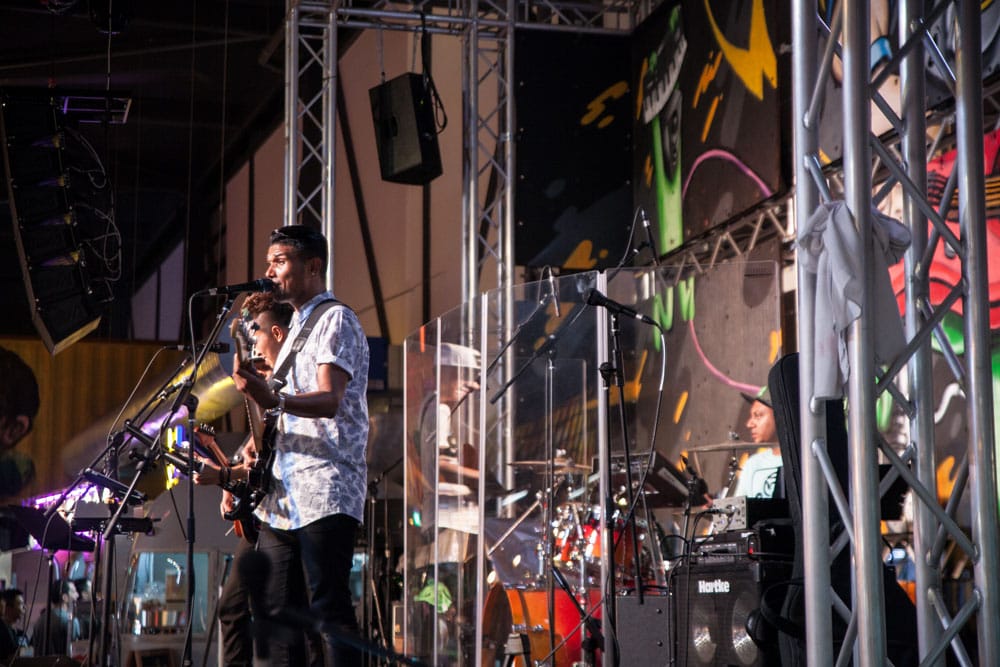 As the food hall is not air-conditioned, do dress appropriately for the weather especially when visiting during peak hours, as it may get stuffy with a crowd of 700 people. Also, do note that since this food centre is new, opening hours of some stalls or restaurants may not be finalised. Many hawker stalls open at 6am and close around 6pm – with some even earlier, while some restaurants open only after 3pm to cater to the evening crowd.

Business Hours
Monday to Thursday: 6am to 12am
Friday and Saturday: 6am to 1am
Closed on Sundays
(Live music performances from Wednesdays to Saturdays)