When we think soccer pitches, the first ones that come to mind are popular stadiums like Wembley Stadium. We looked a little further and found that pitches can exist in unlikely and beautiful places. Here we present a list of mind-boggling examples. 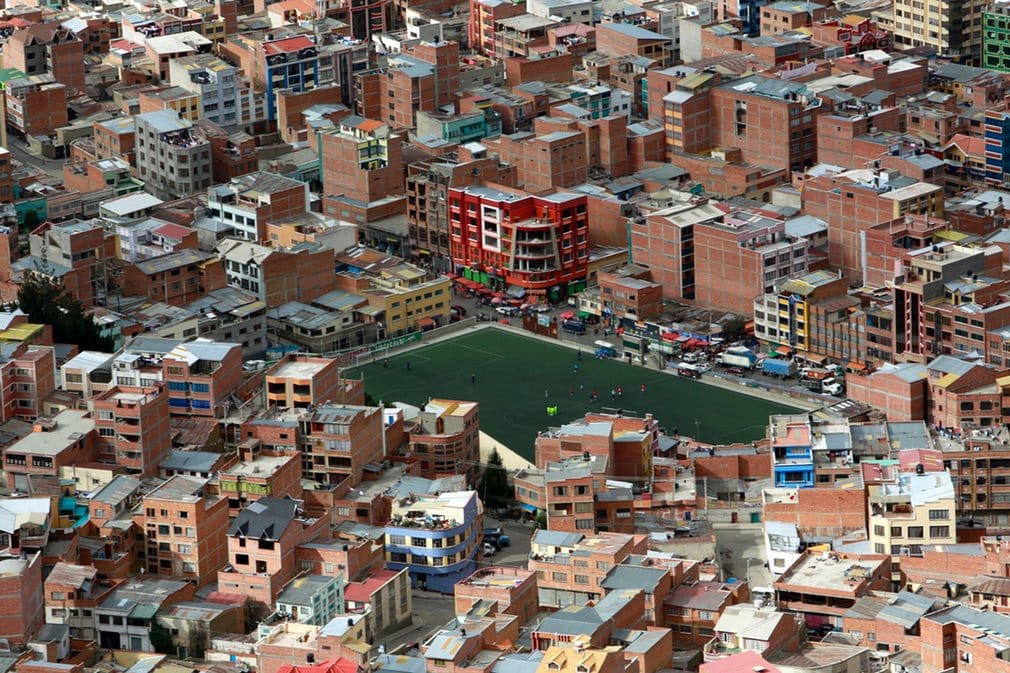 Photo: Bloomberg/Getty Images
Right smack in the middle of the residential area, the perfect central node for everyone to join the good game!
4. Ottmar Hitzfeld Stadium in Switzerland 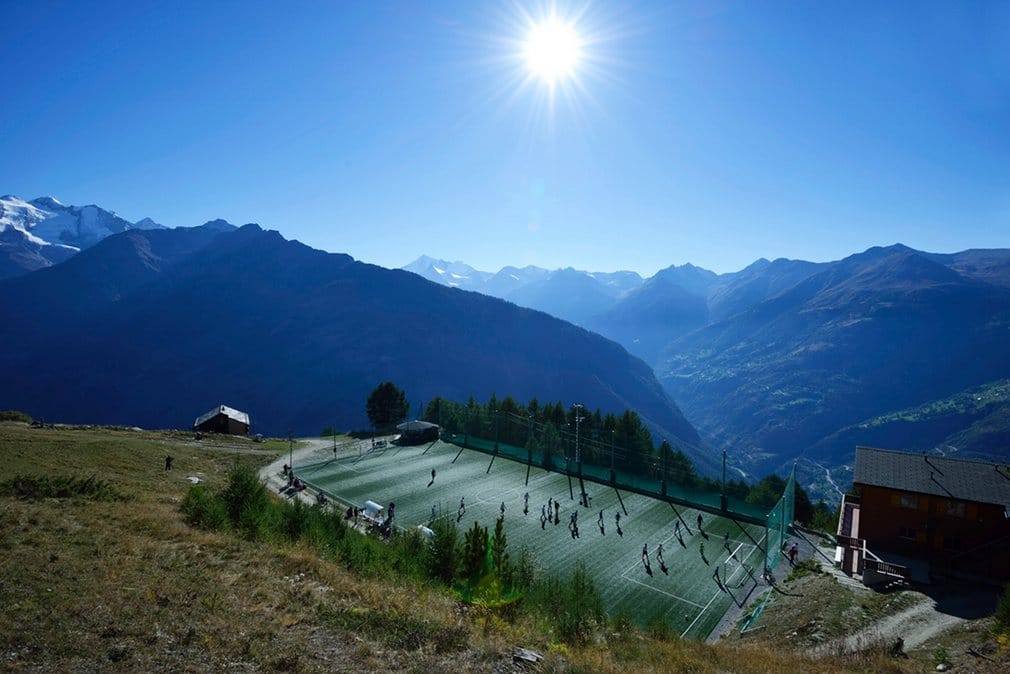 Photo: Anthony Cullen/Ford Fascinating World of Football
At 2,000 metres above sea level, the Ottmar Hitzfeld Stadium in Switzerland is Europe’s highest pitch – and we daresay one of its most beautiful ones.
5. Rock at Victoria Stadium, Gibraltar 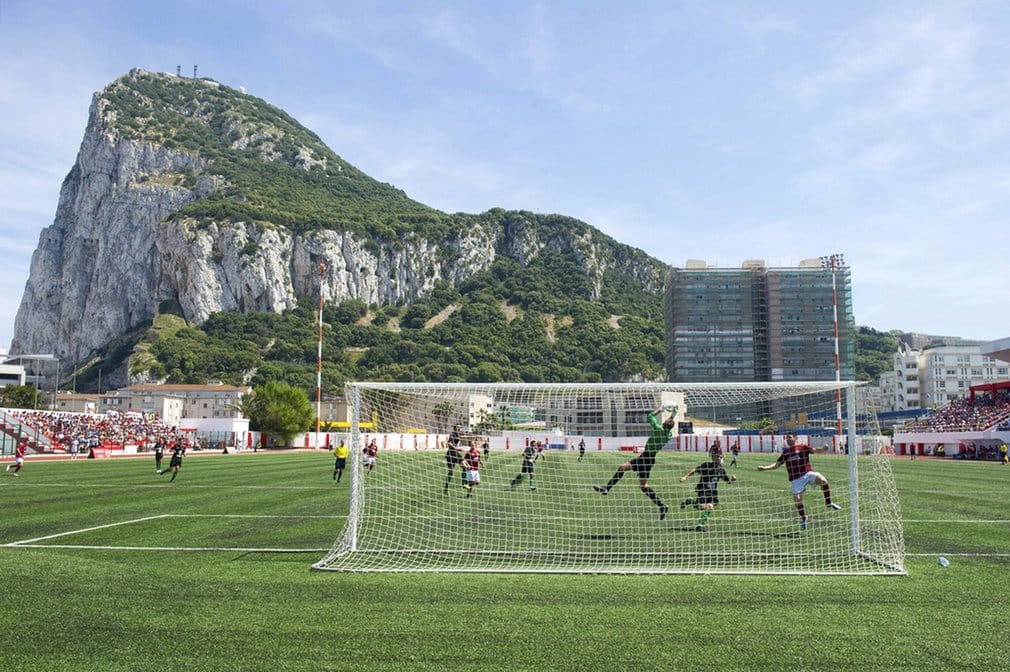 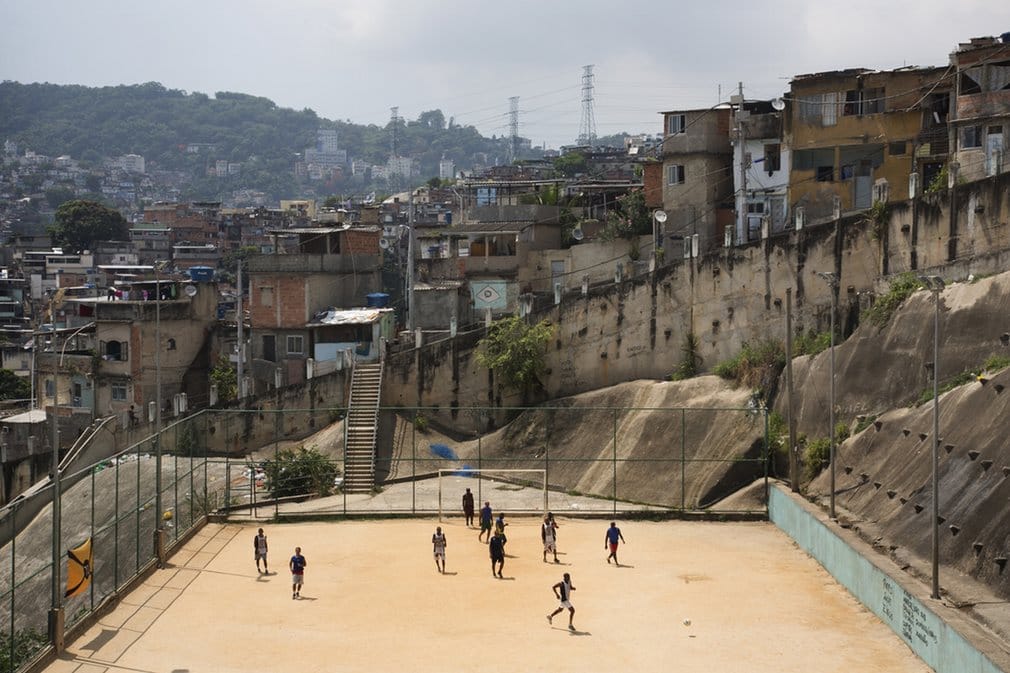 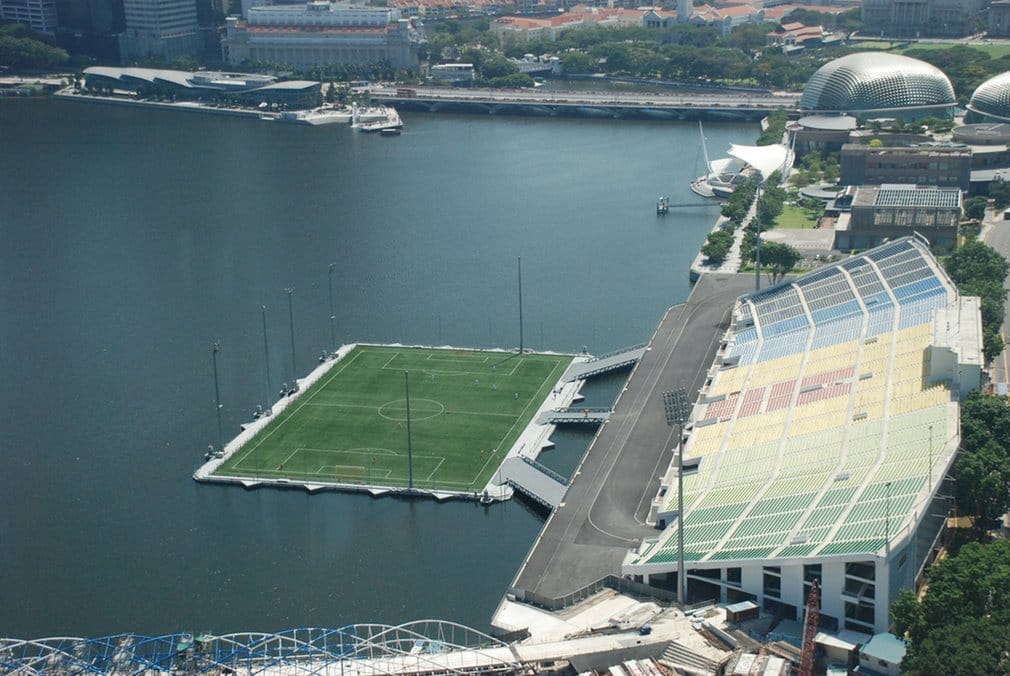 Photo:Paul Briden/Alamy
The Float at Marina Bay, right here in Singapore, is the world’s largest floating football stadium. The surface is made entirely of steel and is so strong that it can bear the weight of more than 9000 people. In spite of having seating facility only on one end, the gallery around it can host 30,000 people.
8. The Adidas Futsal Park, Tokyo 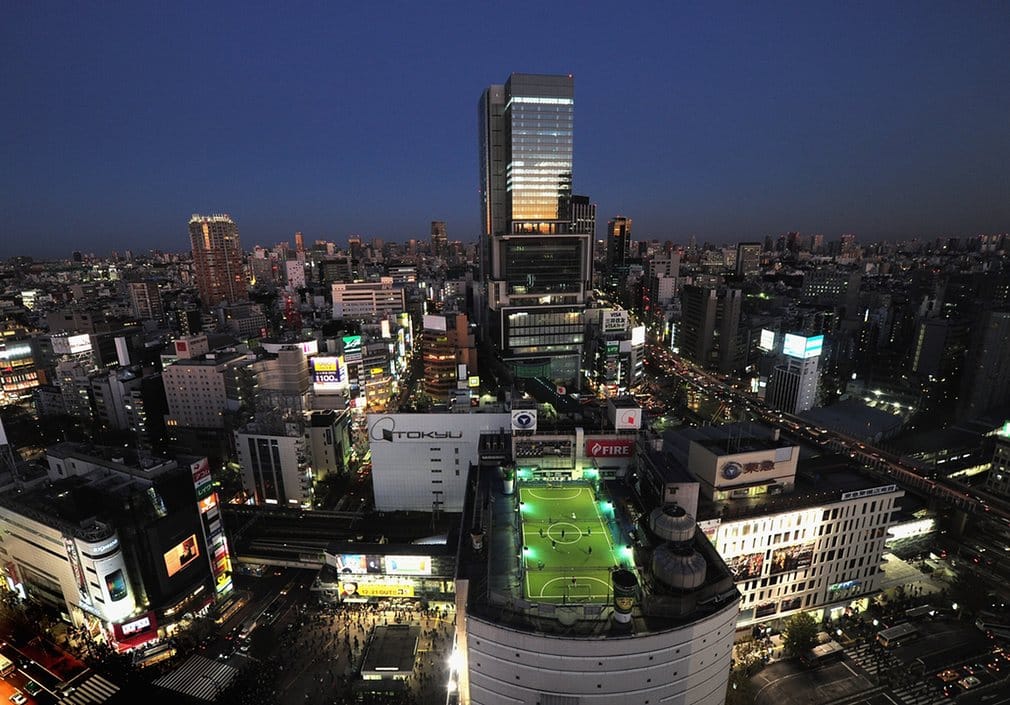 Photo: Shaun Botterill/FIFA/Getty Images
The Adidas Futsal Park in Tokyo sits on top of the Tokyu Toyoko department store, high above Shibuya district. It’s one of a mini-chain of futsal facilities operated by Tokyu (parent company of Tokyu Hands) with Adidas branding, called Adidas Futsal Park. There are five of them in total; the others are in Ikebukuro, two are in Yokohama, and one in Kawasaki. The Ikebukuro one is also on the rooftop of a building.
9. Imotski, Croatia

Photo: Terrain News
Built in 1989 to serve as home stadium for the NK Imotski football club who play in Druga HNL, Croatia’s second level, the Stadion Gospin dolac is truly one of the great wonders of the fútbol world thanks to the bygone relics of both the Byzantine and Ottoman Empires that surround it. It is also close to rocky cliffs and a jaw-dropping 500-meter drop into the Modro Jezero (Blue Lake), located right behind the grandstand.
10. Toftir, Faroe Islands 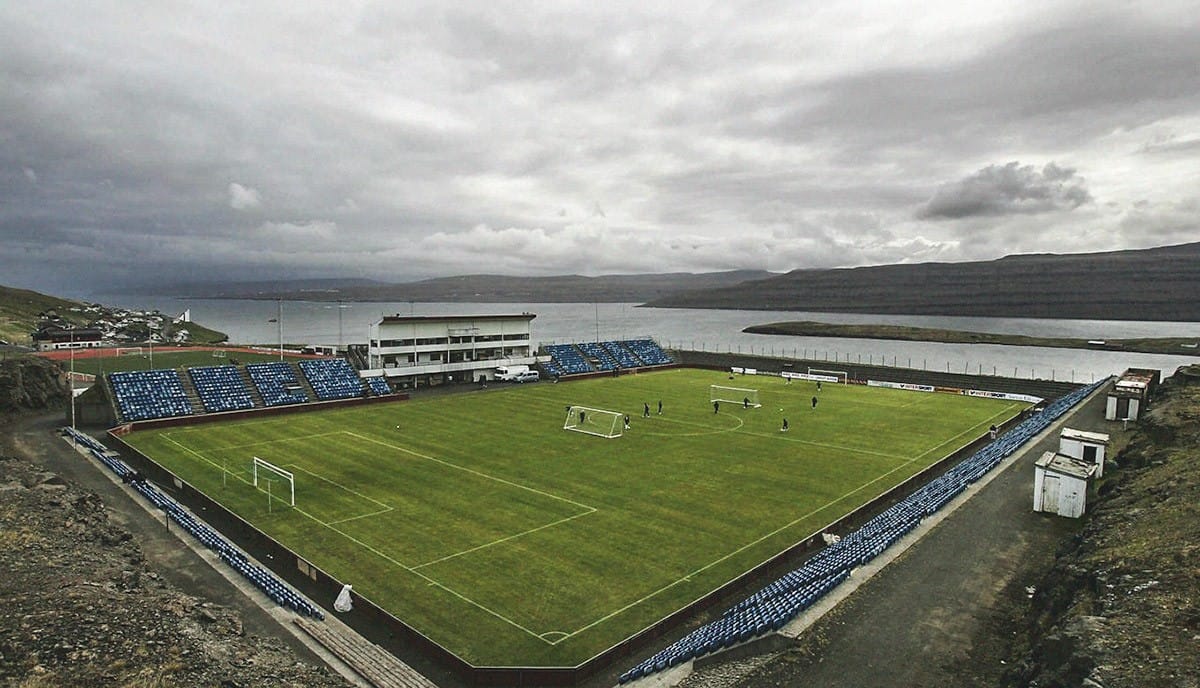 Photo: Imgur
Although the Faroe Islands doesn’t immediately scream thoughts of memorable fútbol moments, the Svangaskard Stadium has been home to several international clashes after serving as the home stadium for the national team for several years before they relocated to Tórsvøllur in the city of Tórshavn. Perched precariously on the edge of rugged rocks that frame the Atlantic Ocean, rumor has it that a man in a boat is often down below to retrieve any balls that have fallen off the edge of the world.
11. Lofoten Islands, Norway 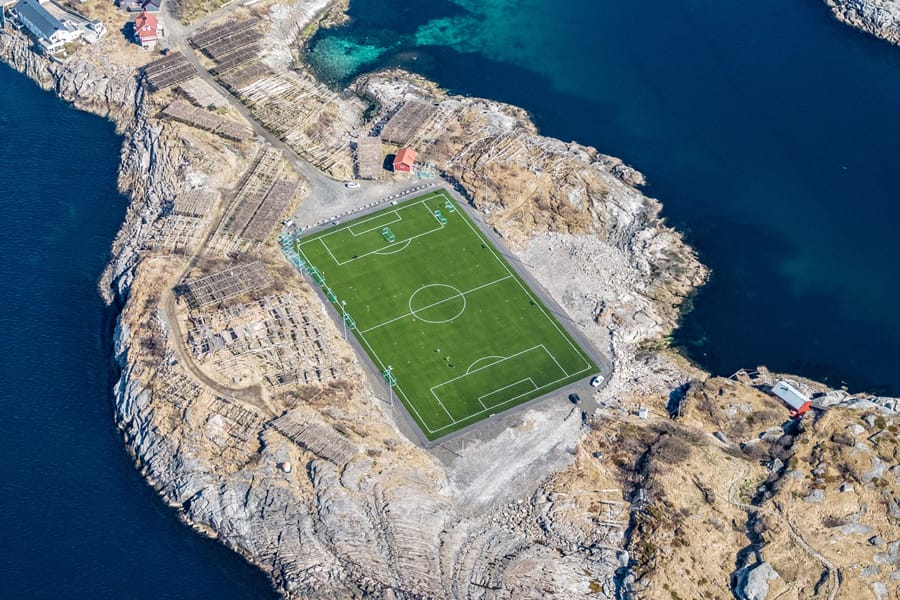 Photo:  JJerms2
This oasis of green nestled conspicuously amidst rocky terrain is certainly eye-catching, especially from an aerial view.